Home Recaps Below Deck Recap: Shane Gets Fired and Elizabeth Walks On Thin Ice; Plus Rachel Gets Pushed to Her Limit

Below Deck Recap: Shane Gets Fired and Elizabeth Walks On Thin Ice; Plus Rachel Gets Pushed to Her Limit 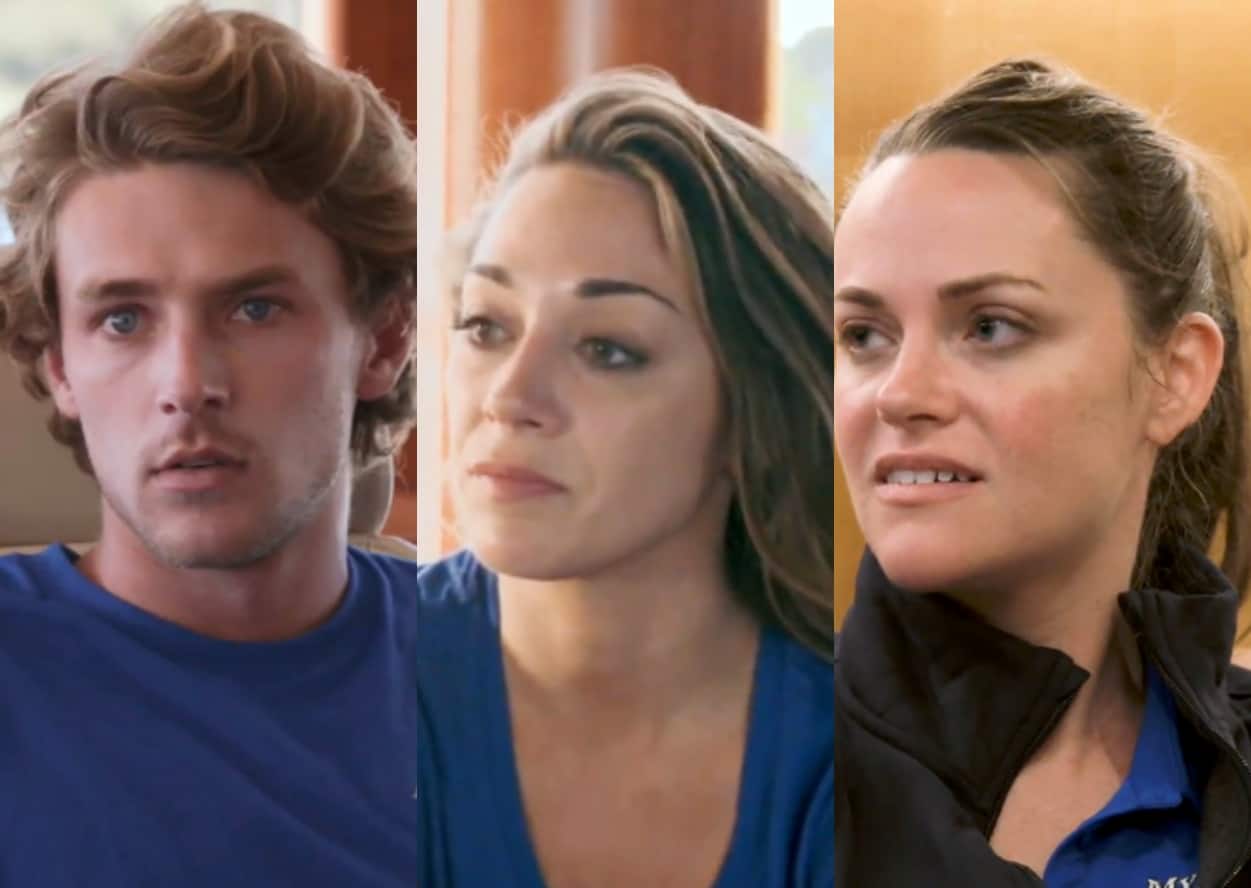 What happens when a deckhand gets fired, the stews are not getting along, and the chef quits? Absolute chaos. On this episode of Below Deck, everything begins to unravel.

When Shane gets called to the bridge, you can see Eddie holding his breath, hoping to hear Captain Lee utter two words: you’re fired. The captain does not hold back when he tells Shane, “You’re just not getting it done for me.” Shane sadly packs his bags and is totally bummed. He claims he learned a lot from his experience, but as Captain Lee says, “You don’t get a participation trophy in yachting.”

Everyone knows it was Shane’s time to exit, but suddenly everyone is acting like his BFF. Well, everyone except for Rachel, who we can always count on to not sugarcoat anything. Rachel wouldn’t even give the kid a wave goodbye…that’s how little she cared about Shane!

On another note, show more of Izzy and James, please. They are the duo this world needs right now. An unhappily married couple. A brother-sister-like-tag-team. Eddie interrupts their banter to let them know that they need to shape up or else they’ll be shipped out like Sunshine. This puts the fear of God in Izzy…James, not so much.

Francesca holds a debrief on the previous charter, but really it’s just an opportunity to bash Elizabeth. Francesca explains that the service side of their job has been slacking. Elizabeth needs to behave like a second stew, according to Francesca. A little less astrology sign analyzing and a little more of DOING YOUR JOB, Elizabeth. Who cares if Chez is a Gemini? Focus on working.

As the crew prepares for a night out, James walks in on Izzy crying in her bunk. She’s upset that although she is trying her very hardest, she fears that she may be fired and that scares her. Izzy is still in a bit in a funk, but she pulls herself out of it in time to go out. Everyone’s in it to win it. Especially Rachel — she has every intention to get wasted.

Rachel is successful in her wishes for the evening. She stares into the abyss and tells her crewmates that she just wants to have a life. She desperately misses her boyfriend, who keeps Rachel calm and collected. Soooo can we get him on the phone, like now?! Everyone knows that when the chef is not happy…no one is happy!

Rachel isn’t the only one bombed. Elizabeth is slurring all dinner and hits on James — well, she tries to. She laments about her current situation with Francesca on the ride home from dinner and Rachel has reached her limit. She drunkenly screams at Elizabeth to, “Shut the f*ck up. Suck it up.” Rachel is saying what everyone is thinking as Elizabeth complains about being called out for not doing her job, cuuuuz she doesn’t really do her job.

OMG, how funny is it that James is working out after a night out drinking? I am SHOCKED that James did not attempt to smooch Elizabeth…instead he seems to explain that his type of girl is one that likes to have fun, teases him, and jokes around. Is it just me or does it sound like he is describing Izzy?

The next morning, Rachel is hungover and Elizabeth is stressed. Elizabeth is tasked with bleaching a shirt and is unsure of the proper procedure. Francesca does tell her to go outside with the bleach bucket as quarters are pretty tight and not highly ventilated…except Elizabeth does not. She drops the ball…again…when she leaves the bleach bucket in the laundry room.

The interior crew begins to get a bit dizzy and the inside of the boat gets cleared out because of a chemical smell. How curious. One would THINK that Elizabeth would remember the bucket at that moment, but alas, she does not.

In the meantime, Rachel calls her boyfriend and asks if he would fly to come see her, and the answer is an emphatic no…as the coronavirus is surging in Italy. Rachel breaks down in tears. But here’s the deal: She really only has to be away from him for a few weeks. I think she can handle it, considering Captain Lee is married and is able to pull himself together. Rachel blames it on menstruation, but…

Luckily, because the interior has gone and poisoned the inside of the boat, the deck crew gets a chance to breathe. James should thank his lucky stars for this mess up as Captain Lee was gunning for him. Maybe if he didn’t keep cleaning the same area of the boat that Izzy JUST cleaned, Captain Lee would trust him a little more.

The chief engineer finds Francesca and lets her know that Elizabeth’s bleach debacle was incredibly dangerous. It turns out that what she did was “used in WWII as mustard gas” and that Elizabeth has f*cked up again. Francesca explains that because Elizabeth used it in the confined area and has caused a disruption on the yacht, she has to make Captain Lee aware. Francesca also threatens Elizabeth’s second stew position and goes as far as reaching out to Rachel for advice. Because Elizabeth put everyone’s safety at risk, Rachel tells Francesca that she will back up Francesca’s position to find a replacement.

This is when things really get awkward. Francesca runs to Captain Lee and explains the situation with Elizabeth. Francesca proposes getting someone else for the next charter. This crew is straight imploding! Captain Lee shuts down Francesca’s plea as the next charter is just too close. Welp, this is gonna be an uncomfortable charter, amiright?

Now would probably be the time for Elizabeth to start working and not be sh*t talking Francesca to Rachel. Poor Captain Lee looks like he wants to jump ship when Elizabeth asks to come talk to him. A worried Elizabeth wants to make sure she is not fired and promises to “deliver” this charter.

Later, Captain Lee sits with Francesca, Eddie, and Rachel for the preference meeting. These guests are way extra and demanding. Rachel’s face falls when she hears all of the menu requests, including a 10-course dinner! Rachel has decided to put her foot down for all these demands. Partly because she is over it, but let’s be real, mainly cuz she wants to be with her boyfriend.

“Eat my cooter. That’s disgusting. That’s despicable.” Yup. Rachel said that. To the captain. She unravels at warp speed and demands a flight home, blaming the over-the-top guests and their mandates. Captain Lee is absolutely taken aback and tries to reason with the chef who just told him to “suck my d*ck.”

Captain Lee suggests, “Why don’t we talk to them and see if they as are ostentatious in person?” Hard no from Rachel. In fact, she tells Captain Lee, “Go f*ck yourself.” WHAT. I feel like Rachel inhaled too much of Elizabeth’s mustard gas or something. Where did this come from and how did it escalate so quickly?

You can see Captain Lee internally seething as he tells Rachel, “You do what you gotta do. I’ll do what I gotta do.” Rachel is done. She claims that because she is overwhelmed, she must walk away. Okay, but the damage that would do to the entire crew would be unthinkable… selfish move.

There’s not a chance Captain Lee can get a new chef in time for the charter, so he attempts to reason with Rachel. He asks if she would stick around for day one of the charter until he finds a replacement, but Rachel refuses. In the words of Captain Lee, “We’re screwed six ways to Sunday.”

What the hell is Rachel even talking about? Who are the HOUNDS? I am afraid she has actually snapped. Her personal problems have clearly outweighed her professionalism. It is interesting how just a day earlier she was telling Elizabeth to suck it up. My how the tables have turned… This episode will be continued next week, but until then, dare I say it?  BRING BACK KIKO!