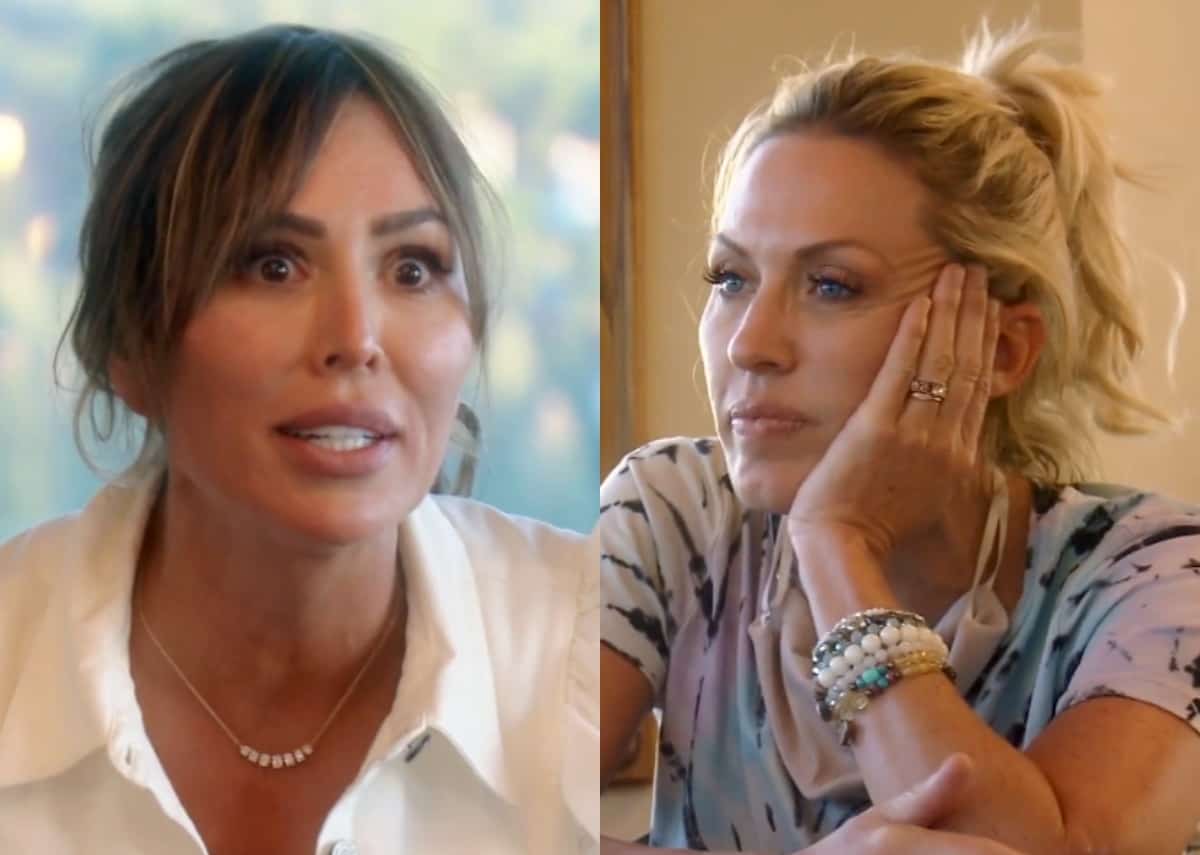 On this episode of the Real Housewives of Orange County, COVID can’t stop a girls’ trip, but it can stop two of the women from tagging along…

Emily has some serious news: She has tested positive for COVID. She states that she only has a headache and is otherwise feeling okay, but her husband, Shane, is now starting to cough. Emily is certain he now has it, although his test came back negative. Because of this, she obviously cannot attend the upcoming girls’ trip to Lake Arrowhead.

I can’t believe Sean is in the same room as Braunwyn after her confession last episode. (How are we supposed to casually look at her knowing that she hits him?!) I also can’t believe that Sean will still sit there and listen to her complain about her sobriety issues and how weird of a trip this is going to be. She never once asked if he will be okay holding down the fort with their 87 kids.

Because Shannon also can’t make the trip since all three of her kids have tested positive, Braunwyn pops over to John’s garage…er, house…before heading to Lake Arrowhead. (No, but really — does Shannon’s boyfriend live in a garage? No wonder he is holding onto Shannon for dear life…) Shannon explains that she has to self-isolate and that she has left her kids alone in their home. Sounds like *they* are probably having the time of their lives without Shan there!

In Lake Arrowhead, Kelly is the first to arrive. And then Elizabeth joins wearing what appears to be a sports bra. No, but seriously, what the heck is Elizabeth wearing?! Also, is Kelly the new Shannon with all of these vitamins and supplements? The ladies settle in and wait for Gina to arrive. Elizabeth confesses that things may get a little weird once Braunwyn gets there. After all, Braunwyn dug up some DIRT on Elizabeth that Elizabeth probably didn’t want the world knowing. Needless to say, Elizabeth is displeased and plans on letting Braunwyn know.

Gina arrives and there’s more and more talk of Braunwyn. It appears as though someone else can do some investigating. Turns out that Braunwyn hasn’t been truthful about her quarantine situation before this trip, huh? The ladies have gotten their hands on a video of Braunwyn out and about, sans mask, chatting it up with people DEF not six feet away. Ooph. BTW: Who else thinks that a trip during a pandemic is not the best idea?

It doesn’t end there as Kelly also accuses Braunwyn of hiring a professional photographer to take photos of her at protests such as the BLM (Black Lives Matter) protest. “Everything’s about her image, and she’s full of s–t,” claims Kelly.

Braunwyn finally rolls up in her mini-van and rounds out the girls’ trip. She’s already feeling a bit on edge, being around alcohol and toxic women, and as she explains it in her confessional, she claims she lives in a very safe little bubble. HOWEVER, when she is called out on her quarantining, she claps back…fast…claiming there was a timeline discrepancy.

In order to move past this potentially argumentative subject, Gina brings up Shannon and COVID. In the middle of the conversation, Braunwyn up and leaves the room. WTF is up Braunwyn’s a*s? She states she doesn’t wanna talk about someone if they aren’t there to defend him/herself. Curious that suddenly she is Mother Theresa when SHE was the one internet stalking Elizabeth….

While Shannon builds up a COVID immunity wall, her girls are “just having a great time all together.” A small part of me feels like her girls lied about their positive COVID tests just to get a break from Shannon, the overbearing mother.

Braunwyn and her hypocritical behavior is really starting to p*ss off Kelly and Elizabeth. Gina tries to get to the bottom of Braunwyn’s issues, but she lets her know that she isn’t a saint either. Gina reminds Braunwyn, Miss I Don’t Wanna Talk About Anyone, that she “shouldn’t be digging up stuff on” Elizabeth and that although they are talking about Shannon’s situation, they are not talking about her in a negative light. Never thought Gina would be the voice of wisdom for this trip.

Gina also asks Braunwyn the hard questions. She finds out that she hasn’t had sex with her husband during quarantine and they are more like passive-aggressive roommates. Braunwyn gets really heavy when she tells Gina that Sean never left her because he was afraid she was going to die. Yikes.

Back in the OC, Emily checks in on Shane. He is struggling and feeling very sick. Emily is having a hard time balancing home life while having COVID herself. Maybe the Lake Arrowhead crew could see their situation so they will understand that masks and social distancing do protect you!

Over in Lake Arrowhead, the women head out to the beach. Kelly continues to make snide remarks about Braunwyn like, “I liked her better when she was hammered.” OMG, Kelly.

As the ladies play in the water, Kelly calls Shannon to fill her in on the Braunwyn gossip. Except Braunwyn catches Kelly mid-sh*t talk sesh.  OF COURSE Kelly feels zero shame upon being busted.

Later, Emily’s home video is terrifying.  She is crying and Shane is not getting any better. It’s an incredibly overwhelming situation, but I am somewhat concerned about her children running freely around Shane. It’s time those in-laws come scoop up the kids!

Glad no one is taking the pandemic seriously on this girls’ trip. The face shields they are donning while cooking is a lame attempt at safety. Braunwyn is regretting her decision of coming as she eyes the booze and escapes by calling and berating her husband. She yells at him for not having his phone nearby and complains about feeling the drama and the toxicity coming.

In the meantime, Shane has gotten so much worse that Emily has taken him to the hospital. His oxygen levels are low, he is on an IV, and he is by himself because of hospital protocol. The next morning, Emily fills Shannon in on Shane’s current state. Shane’s gallbladder issues are also piling up on top of the COVID concerns and Shannon understands. Emily states that Shannon has been a good friend to her throughout this time. They bond over motherhood, COVID, and their stress levels.

While the Arrowhead girls wait for dinner, Kelly discusses Rick and his Fox News position, yet she claims he is not political. Kelly tries to defend him and his news by saying, “you can’t re-write history,” and then Braunwyn hops in. Kelly interrupts anything that Braunwyn tries to explain by yelling, “you can’t go and destroy things.” Braunwyn says that being nice hasn’t worked, so it’s time to get rid of offensive statues and realize that white privilege is a real thing.

Gina interjects and states that never once, during her arrest, was she afraid of the police officers who arrested her for the DUI. And that is white privilege. Interesting that Kelly chooses NOW to state that she is Mexican to make her points seem less offensive. Elizabeth feigns that she is starting to understand why change is necessary, and despite having an uncomfortable conversation, dinner goes rather smoothly.

Later in the night after Braunwyn leaves to go stay at the hotel, Elizabeth lets Kelly and Gina know that she wants to confront Braunwyn but decided that tonight was not appropriate. Good call. The night is pretty subdued until we see that there’s a full-on bug infestation in Gina’s master suite. Yea, that’s gross and all, but Emily is stuck at home dealing with real problems. She was able to get a hold of someone at the hospital who could give information about Shane, but she has no idea how he is doing, has no idea when he is coming out, and has no idea how badly Shane is suffering through this virus…alone.