RHOC Recap: Elizabeth Cries Over Growing Up in Cult as Gina Preps for Matt’s Trial 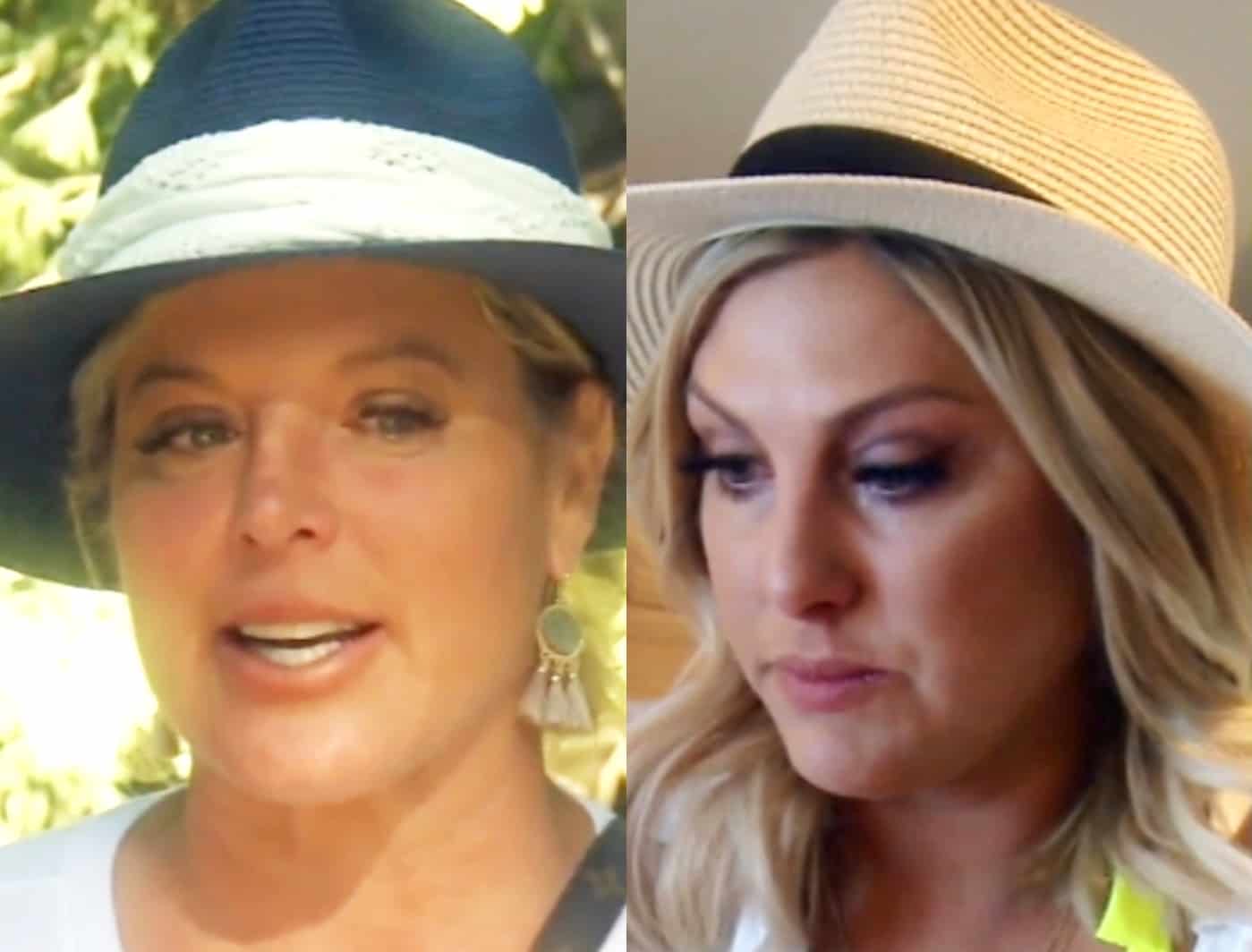 On this episode of Real Housewives of Orange County, the ladies are still in Lake Arrowhead (and STILL do not know how to wear a face mask properly) while Shannon and Emily deal with their COVID issues back home…

Somehow, the Lake Arrowhead crew managed to sleep through the night despite the bug infestation and Elizabeth‘s car alarm going off incessantly. Just one question: Why are they all dressed in scandalous negligee in the morning?  Braunwyn‘s still at her hotel, feeling like the whole world is against her. In fact, when she phones her BFF, Shari asks if the trip is just a “straight-up anti-Braunwyn campaign.” Must be nice to think the WHOLE WORLD revolves around Braunwyn…

Back in the OC, Emily is finally able to FaceTime with Shane, who has been fighting COVID solo at the hospital. Emily becomes emotional about wanting to “do life” with Shane, but luckily, he seems to be doing better despite still being on oxygen.

Braunwyn returns to the lake villa in her minivan and she wants to have a one-on-one conversation with Elizabeth. In case you forgot, Braunwyn was digging up dirt on Elizabeth and her past finances, and Elizabeth is displeased. It is the absolute elephant in the room, so it 100% needs to be addressed.

This trip has been the opposite of a good time, so it beats me when Shannon states she is experiencing FOMO while she self-isolates back in the OC. Despite being negative three times when she took COVID tests, Shannon is still taking proper precautions and staying the hell away from her positive daughters.

Gina slips away to take a call from her lawyer. Poor Gina. She keeps finding out more about Matt’s case, where he has two felony counts. The max time he can serve is over four-and-a-half years, and her lawyer lets her know that the judge will be taking Gina’s feelings into consideration. Gina explains that she still feels guilty about Matt’s trouble as she is “physically hard-wired to feel” like she has to “protect him,” but now it’s time for Matt to pay for what he did.

Gina is super upset after hearing about this information and she is unclear of the right thing to do. She has a solid boyfriend in Travis, and as he listens to Gina cry over the phone, he attempts to talk sense into her. Gina hopes that there is a light at the end of the tunnel, and that slowly, things will be better.

It’s hard to take Elizabeth seriously with this mask, bikini combo. I mean, why even bother WEARING a mask if you insist on using it as a chin strap!? However, Elizabeth does make a good point. During their sit-down chat, she calls Braunwyn out on being all light and love because, in reality, all that Braunwyn is doing is just breaking people down.

In true Braunwyn fashion, she deflects and attempts to defend her snooping & sharing of Elizabeth’s life. Braunwyn blurts out that Elizabeth lied to her about personal, real estate things, but Elizabeth clarifies that she didn’t lie to Braunwyn — Braunwyn just didn’t *ask* for all of the details of her “sophisticated” life. Enter Kelly, who tries to translate how the women are feeling, but she just looks like an idiot. What else is new?

OF COURSE Elizabeth talks about her very hard divorce and how she runs “one to five to six to 10 miles a day” because she can’t handle the pain of it all. Elizabeth doesn’t need to explain her life to Braunwyn. They met like 11 minutes ago and this is very personal stuff!

For once, I side with Kelly here. Braunwyn needs to stop making EVERYTHING about her. She should probably fix her own house before she starts judging Elizabeth. And really, you’re just a “bougie blonde,” too, Braunwyn.

Elizabeth sobs to Braunwyn about being scared of women and Braunwyn (lies) says she would never betray Elizabeth. Braunwyn owns the fact that what she did was sh*tty and says, “I’m trying to do the right thing and I f*ck up a lot.” She blames being sober and quarantine. Shocker.

Gina walks into this fake bullsh*t fight with her real-life sh*t about her ex’s upcoming trial. Leave it to Kelly to side with the abuser! She recommends Gina, “Give him some mercy so he can get a job. You don’t want to ruin his livelihood.”  Man, Kelly. Know when to quit it.

After a minute, Braunwyn spills and says Shannon was the one who planted the idea in her head to investigate Elizabeth. Elizabeth is straight baffled that Shannon has bad blood with her. The plot thickens. Or the puppeteer gets busier. Elizabeth is upset as she is in a process of “self-discovery” (WTF is happening!) and just desperately wants to be friends with these women (WHY).

Welp, the fourth one’s the charm: Shannon has tested positive for COVID. She is worried about herself and p*ssed at her kids for exposing her. After Shannon tells the women, she phones her mother and cries. She is scared and shares how angry she is at her daughters for being careless. You can tell she is afraid to hear what her boyfriend, John, has to say about all of this, as he is currently living with the COVID queen herself.

The Arrowhead ladies head over to Skypark for an afternoon of fun. Wait — did Braunwyn call her friend, Shari, her wife?! Talk about foreshadowing… Braunwyn and Elizabeth do some archery and ax-throwing while Gina and Kelly go mountain biking. Of course, Kelly takes this as an opportunity to make far too many sexual references about riding things. Gross.

In COVID news, Shannon is annoyed her kids don’t seem to care she now has COVID, and Shane has to stay in the hospital for up to five days. He seems to be breathing better, but Emily is scared of the long-term issues that come with having COVID. Emily is doing the best she can to keep her kids safe and away from her, as she, too, still has COVID, but she is holding down the fort.

Meanwhile, back at Skypark, Kelly and Gina are off-roading and Kelly refers to Gina as the “abdominal snowman” when she struggles to get up the hill. I cannot deal.

Braunwyn and Elizabeth have a forced heart to heart where Elizabeth shares that she feels bad about potentially screwing up friendships. Elizabeth explains that she avoids conflict, yet she is talking out of both sides of her mouth. She beats herself up for marrying for a Ferrari and she is embarrassed by her past. Braunwyn lets Elizabeth know that everyone has a story and that allows Elizabeth to open the flood gates.

Anyone else love when Housewives say they won’t say anything about the thing they JUST TALKED ABOUT WHILE FILMING?! Elizabeth spills. She shares that she was raised in a religious “situation” where she was told to never talk about what is actually happening in her life. Elizabeth is proud of her mom for getting them out of that situation, but she still struggles with trying to articulate her emotions. It isn’t clear what happened, but Braunwyn does a good act of listening.

Elizabeth slips and finally calls it a “religious cult” where she was beaten and told to be quiet about everything. HUH. She goes from a very classic Elizabeth line: “I’m not supposed to be talking about this” to having a full-blown panic attack. That escalated quickly…