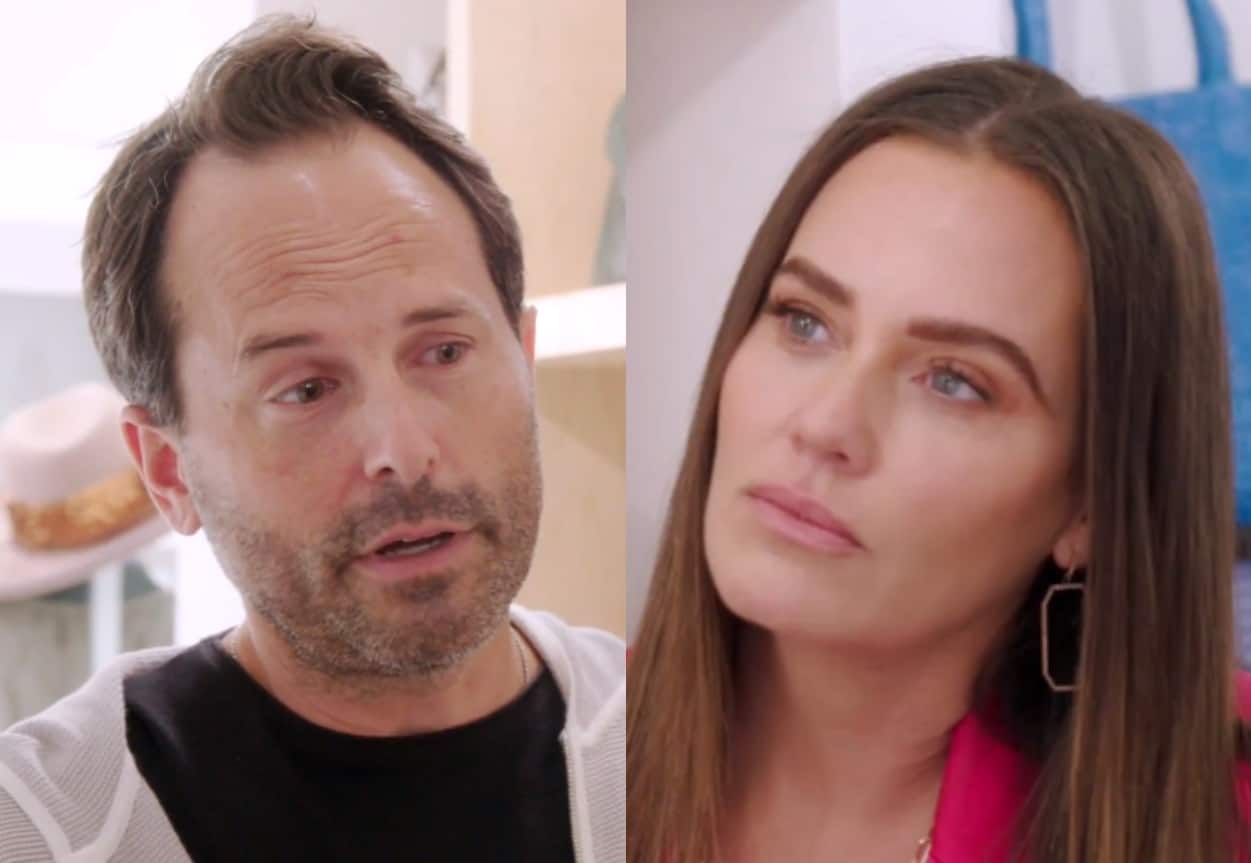 Welcome back! This here is the last Real Housewives of Salt Lake City recap of 2020, The Year That Broke Us All. Before we get to the episode, I just want to thank all the Blurbers for your kindness and support. Doing these recaps has lifted my spirits in ways I didn’t think possible, and it’s truly a privilege to write content for the best damn comments section on the internet! You all are [in Mauricio’s voice] AMAAAAZING. Truly.

On last week’s episode, Park City threw one of the most embarrassing Fashion Weeks in Housewives history, Heather Gay told her daughters she doesn’t want to be Mormon anymore, and Jen Shah dropped a bomb on Whitney Rose about Meredith Marks’ possible side piece. Let’s check-in on where they are now!

We start out at Mary Cosby’s house as she FaceTimes Robert Jr. and chides him for using her money to buy his girlfriend gifts. As you’ll see, this episode is very Mary-light, and I’m starting to wonder if they edited out a lot of her scenes because of all the backlash she’s been receiving about grandpa f*cking and running a cult. There’s no telling what Bravo deems as appropriate television for viewers these days, so who knows?

Over at Beauty Lab + Laser, hammers are swinging and walls are getting knocked out. Back when Heather was married, she didn’t need to worry about money whatsoever, but now that she’s found the sweet, sweet taste of financial independence, Ms. Perfection is Attainable is getting ready to expand the spa. I’m genuinely curious about this place, and I might need to schedule an appointment just for investigatory purposes. Stay tuned!

Up in Park City, Meredith swans around in her jewelry shop, and Brooks gives her a call. She nervously informs him that Jen invited all the women and their husbands out for a snowmobiling excursion, and I’m surprised Brooks didn’t belt out, “WELL, THAT’S NOT HAPPENING.” Maybe he’s unable to have hostility toward Jen AND his dad at the same time because Seth walks into the shop, and Brooks snaps through the phone, “Thanks for missing my show.” Dear god.

I’ve been pretty easy on Brooks so far, but this kid seriously needs to be checked. YO, BROOKS: Your “fashion line” sucked, and it’s definitely not cool to be passive-aggressive with your parents, so cut the crap, you little ingrate. [Deep breaths.] Anyway, Meredith tells Seth that Brooks was disappointed he didn’t show up, but Seth and his five o’clock shadow explain that he didn’t want their marital issues to cloud over the fashion show. Fair enough.

Seth says that he realizes he spent way too much time focusing on his career, and he failed to work on their marriage the way he should. He begs Meredith to give them another chance, and for the first time this season, it looks like Meredith might be bending a little. These two have been really bringing the emotions this season, haven’t they? I previously read Meredith as someone that was checked out and ready to move on, but between this scene and yesterday‘s news about their reconciliation, it’s nice to be proven wrong FOR ONCE. (Or it could just be a made-up storyline. Whichever.)

Back in Salt Lake, Lisa Barlow and her husband John go to HSL for a heart-to-heart dinner. Y’all know I’m not much of a fan, but I’ll admit that besides the fur (again with the goddamn furs!), Lisa looks really cute this evening. She gloats that she can get a reservation anywhere, and Readers, I laughed so hard. Getting a table is NOT difficult in the vast majority of SLC restaurants, so bragging about something like that is as dumb as me bragging that I know how to cut my toenails. It’s really not that impressive.

John says they need to start working on “not working.” Lisa looks vexed, and then it cuts to her texting while she’s in her talking head, not paying any attention to the producer’s questions. LOL. I’m really digging John. He seems like a nice guy, and he has his head in the right place as far as family is concerned. It’s not fair at all to drag a woman for building a business AND raising a family, but even Lisa acknowledges that she’s kind of screwing up with the kids by not being present enough.

Next, Whitney and her husband Justin drive out to Steve’s sober living facility, and the mood is very heavy. Steve recently sent his daughter an, “AHHHHH! I REFUSE TO HAVE A ROOMMATE,” message, but Whitney’s no dummy: She knows he’s trying to make excuses to leave the program early. Upon arrival, the family and Steve’s counselor head into the “family room” for a little chat.

Steve tries to exude confidence and says, “I want to get back in the game and pick up my career.” Whitney asks if he’s looked for a job and how he’s going to afford life on the outside, to which Steve replies, “Nope, and I’ll need some help.” WTF?! First, Whitney spent $30,000 on her dad’s recovery, and now she’s expected to take care of him when he gets out? This guy is a mess. Justin says that sober living is the best place for Steve to be right now, and the couple is firm in not wanting him to leave early.

Now it’s time for the aforementioned group snowmobiling excursion. (Quick story: The first and last time I snowmobiled was somewhere in the Uintas with my cheerleading squad back in high school. About 10 minutes into the ride, we crashed and I FLEW straight into a snowdrift. Luckily, neither the driver nor I were hurt, but from that moment on, I decided there were bigger and better things in this world to nearly die over.)

The whole crew (including Sharrieff! Well, I’ll be damned!) is going to ride 21 miles up a mountain, and Heather is cool as a cucumber about being the only one to ride alone. She zooms ahead of the pack and is all, “EAT MY SNOWDUST, BITCHES!” Whitney and Justin are the first to crash. Then Meredith and Seth. Still, despite the inherent danger of snowmobiles, the scenery is lovely, and everyone makes it to the mountain in decent shape for lunch around a fire.

Sharrieff and Jen talk about how they met in college. They went to a dance together, and little did Sharrieff know that Polynesian families are big into hazing new suitors. Haha! Still, he won over Jen’s heart, and he waxes on about how sweet she was. The editors get cheeky and show a montage of Jen yelling at everybody throughout the season.

Seth announces he’s going back to Ohio on Monday, so Sharrieff invites them over to the Shah Chalet before he leaves. Whitney thinks the top of a mountain is the perfect place to pull Heather aside to talk about Jen’s weird conversation regarding Meredith last week. Heather quietly mentions that Jen already told her about Meredith’s possible man on the side, but she tells Whitney she has no interest in jumping into THAT situation. Attagirl. The only thing Heather came away with from this encounter is that she now knows her friend Jen can’t keep a secret.

Aww, I love seeing my state’s beautiful mountains on this show! New York has its skyscrapers, Orange County has its beaches, and our humble village has natural beauty all around us. I seriously cannot wait until Bravo brings the ladies down south to the desert! Anyway, now we’re at the Shah shah-shah-shah Chalet, and Meredith (wearing bell-bottoms AGAIN) and Seth are the first to arrive. Lisa and John show up next, and we’ve got ourselves a little couples party.

The men talk about the various substance restrictions between Mormonism and Islam, and they learn that they’re really not that far off from each other. Sharrieff asks Lisa about her alcoholic beverage company butting heads with Mormon values, and she brushes off the contradiction by saying that religion is a choice, and being LDS is her choice, regardless of what kind of company she owns. John seems cool with it too. Whatever floats your boat, you two.

The ladies hop in the jacuzzi while the men play shuffleboard. Jen tells the girls about her loneliness, and Sharrieff tells the guys she’s usually GONE when he’s actually there. John can sympathize because even though he sees Lisa quite a bit, it’s mostly work-related and very not romantic. It seems like the entire group needed to vent about their relationships… especially Sharrieff.

Jen once again asks Meredith about what she would do if Seth were seeing someone else. In her talking head, Meredith tells us that she’s pretty confident about her and Seth’s situation, but she isn’t quite ready to share that with the world just yet. Watching Jen being annoyed by Meredith’s less-than-juicy answers is like watching a car wreck in slow motion. You know she’s going to lose her temper, and it’s going to be over something that is none of her business. Jen really needs to hit the brakes because just about everyone is losing patience with her, and sticking her nose in Meredith’s marital affairs is a collision waiting to happen.

On the next RHOSLC, we get to see penguins! Brooks talks sex with his parents, and one of Heather’s daughters wants a new tattoo. Mary (oh there she is!) cries to Robert Sr. that she wasn’t invited to a hip-hop party. And it looks like Jen ruins said hip-hop party by throwing a glass. Thanks for reading, Blurbers! Have a very, very happy New Year!