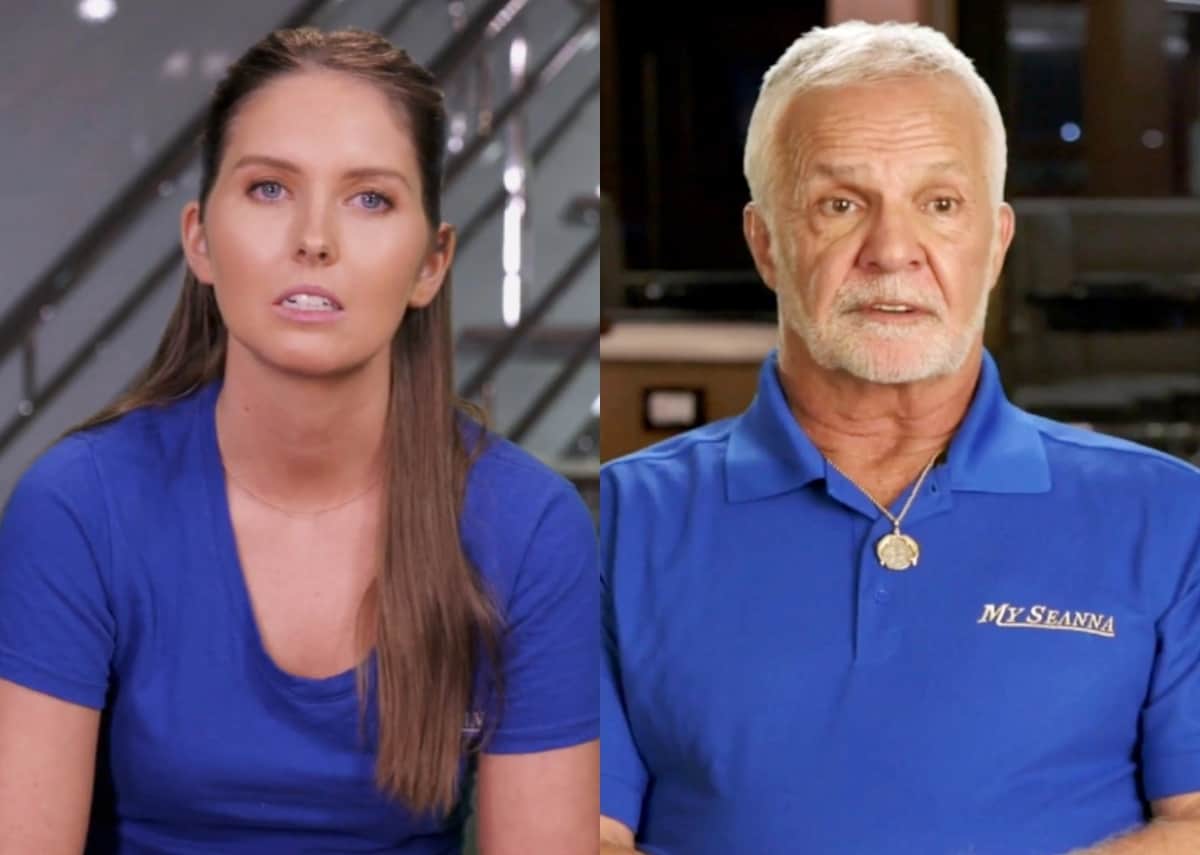 On this episode of Below Deck, Captain Lee gets pushed to his limits when a disorderly guest deliberately goes against his orders…

The yacht is docked in Antigua with 29 hours until the next charter. Seems like much of the crew is hungover (i.e. Ashling yelling about how bright the sun is), and Elizabeth is doing a fine job of kissing and telling. She states she is “giddy” about James and has herself practically married to James with three kids in her head. Here’s to hoping he actually remembers smooching her.

Flustered Elizabeth forgets that she has to meet up with Francesca and Ash to rub in the fact that Elizabeth is now demoted to third stew. Francesca is very clearly taking her frustrations with Elizabeth out on her job responsibilities and basically tells her she should just get down to laundry and stay there until every charter is finished for the season.

Eddie takes a minute away from work to share his dislike for Rachel with Izzy. They giggle about how she becomes a “little gremlin when she drinks,” and that is an incredibly precise description of Rachel. Izzy nailed it.

Could Elizabeth be ANY more awkward around James? She giggles like a little schoolgirl in love any time they are near each other, whereas James is slightly annoyed that Elizabeth spilled the tea about their hookup. If he had his way, their kiss would be kept secret.

While on the subject of love, Rachel talks to her Italian boyfriend and learns just how serious this coronavirus is getting, and Rob, well, he is just getting weirder and weirder as he expresses his interest in Francesca. He describes Francesca as a “hot nun. You can look but you can’t touch.” WTF.

Note: Never expect Elizabeth to keep a secret. She is telling anyone with ears about making out with James. On the other hand, James claims it’s just a rumor. Izzy knows what’s up with James, though. She is well aware that James is just down for some yacht fun…

Francesca finally decides to confront Elizabeth as she can no longer deal with the fact that Elizabeth is talking about her to other crew members. According to Francesca, Elizabeth is “affecting the entire crew” when they hear her. I feel like Francesca has bionic ears or something. Shocked she could hear Elizabeth chatting with Izzy — she was certainly not yelling her frustrations so the whole yacht could hear. Francesca lets Elizabeth know that she doesn’t “give a f*ck” about what she has to say and Elizabeth promises she’s gonna do better next time. Same. Old. Story.

Although Elizabeth is defeated by this recent confrontation, she feels slightly relieved. “Thank God that I found James. I’d kiss him again.” Oh jeez. James is her knight in shining armor?

Did Captain Lee just say, “Am I tardy to the party?” as he arrived at the preference meeting with Rachel, Eddie, and Francesca? OMG. It is clear that these next guests are going to be quite high maintenance, and it doesn’t help that they are self-proclaimed boat people…

Later, James and Elizabeth have a bit of a deck-date and I am CRINGING as they get to know each other. It’s like the world’s most forced list of icebreakers. They exchange an awkward kiss before heading to their own bunks. However, I feel like James should find someplace to crash for the night.  His bunkmate, Izzy, is sick as a dog… Uh oh. Perhaps she should isolate herself from the others instead of trying to push through it, especially when COVID is creeping closer.

The next morning, it is evident that Francesca needs a Xanax before she implodes. She is a ticking time bomb who forgets her stripes on her uniform, and when Eddie asks, “did you demote yourself?” I LOLed. These charter guests are doozies. They are drinking like fish, and clearly, Rachel is feeling the stress.  I mean, she put her phone in the FREEZER. NOW how is she supposed to keep in touch with her Italian BF?

Elizabeth is ALREADY dropping the ball with the cocktails and this charter just started. So much for being better THIS time around… Luckily, the guests are pleased with Rachel’s bomb lunch, but when they hear about Eddie’s plans for tomorrow, everyone begins giving their opinion. Poor Eddie has to deal with these boat people who want to do EVERYTHING and drink EVERYTHING. Exhausting.

The guests have invited Captain Lee to their roaring ’20s themed dinner and the captain is less than thrilled. Rachel is responsible for a six-course menu and it’s a damn shame since these wasted guests are probably not even going to make it to dinner at the rate they are sucking down that booze…

Wait — this guest Dolores used to RACE jet skis?! Coooool. Doesn’t seem like Dolores should be maneuvering that equipment after all the alcohol she consumed but who am I to discuss maritime law??

As Francesca and Ash decorate the dining room for the Gatsby meal, they gossip about the recent James and Elizabeth hook up. Sounds super professional to me, huh? Maybe Francesca should follow the advice she gives to Elizabeth.

Eddie sends Izzy off to bed because she is fading. Izzy is praying that her Guillain-Barre is not flaring up again and I am honestly quite worried about her health. Unfortunately, it seems like she has been replaced. James has ignited a new romance with his boy Rob…

Can we discuss Captain Lee’s cowboy boots with his tux?! So on brand. And so NOT Great Gatsby. It wouldn’t matter if he was dressed as a clown — these guests are so tanked that they do not even know what’s happening… particularly Dolores.  She is burping and has now moved on to red wine. She starts talking about how Captain Lee hasn’t been in the water naked yet and is rambling on about embarrassing nonsense. Because he is a gentleman, Captain Lee excuses himself before things get REALLY out of hand.

It’s a good thing the captain didn’t get too far because Dolores has other plans. Francesca tries very unsuccessfully to talk Dolores out of jumping into the ocean and Captain Lee warns her to not go in, as she is very drunk, and it is very dark. He is p*ssed. Dolores slurs about “fish liking peas,” and despite a threat of sharks, she belly flops into the water and begins a strong backstroke for a woman who is absolutely smashed. Captain Lee is FURIOUS.

The crew stands around in awe trying to stifle their laughter as Captain Lee unleashes on this woman for performing the “ultimate FU to the Captain.” Dolores floats rather casually on her back and requests some bacon to a VERY ANGRY Captain Lee. He straight tells her she is out of her mind and that she better get back on deck.

To that, Dolores retorts, “I have paid a lot of money.” To be a disrespectful a*shole? Captain Lee yells, “Your charter just ended,” and he is so mad that he cannot even see straight. He storms into the dining room to inform the guests it’s all over for them. In the words of Captain Lee, “These a*sholes are going back to the dock.”