Home Below Deck Below Deck Recap: Captain Lee Bans A Charter Guest, James Hooks Up With Elizabeth, Plus Rachel’s Drinking Gets Out Of Hand

Below Deck Recap: Captain Lee Bans A Charter Guest, James Hooks Up With Elizabeth, Plus Rachel’s Drinking Gets Out Of Hand 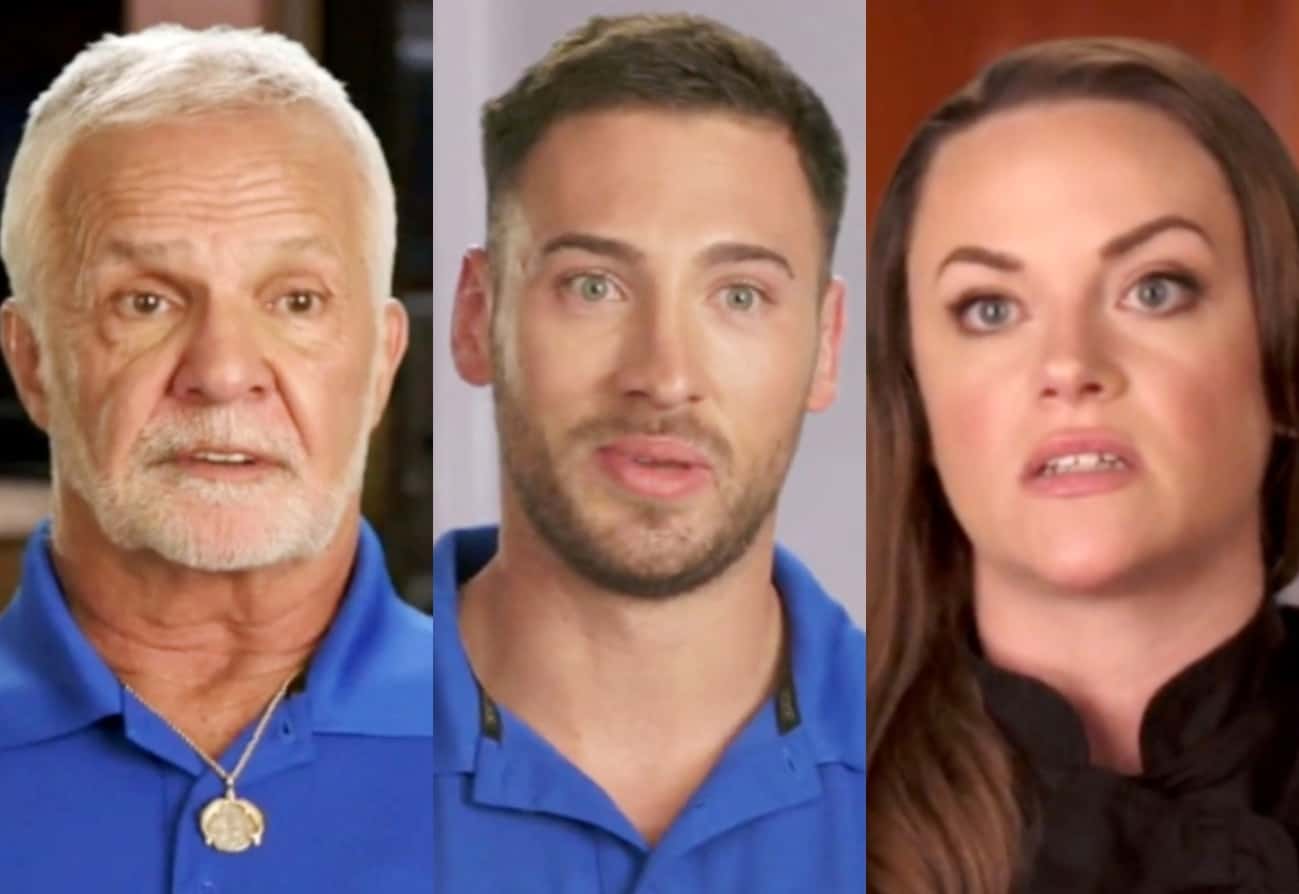 “Your charter is over.” A phrase no one has ever heard Captain Lee utter on Below Deck until this night… the night Delores, a charter guest, decided she wanted to channel her inner Michael Phelps and take a drunken dip in the dark waters…

When Delores finally gets herself back on the boat, she straight-face says, “I was told I could go swimming so I did.” Um, excuse me, what?! No one told you THAT, Delores. Nothing is going to happen until the morning because it is wise not to drive a yacht while seeing red. Captain Lee has a lot to think about, but he certainly made his anger known.

Word spreads throughout the crew, and Rachel coined the phrase of 2021: Delores “DILLIGAFed all over the boat.” Translation: Does it look like I give a f*ck. Delores has certainly made a name for herself on board. I mean, this grown a*s woman legit needs a babysitter for the rest of the night once she goes into her room. Basically, the crew must create a Delores-Watch schedule to be sure she doesn’t go overboard again.

Izzy, who awakens from her sick slumber, gets filled in on the details and is willing to be a team player and watch Delores. James takes advantage of the empty room and brings his new love interest, Elizabeth, in for a “snuggle.” Riiiiiight. This is all good and fun, except that James shares a room with Izzy. Remember, the girl is sick and only wants to rest and feel better. Izzy is horrified and annoyed to know that Elizabeth and James had a quick romp in the bunk.  “I’m making this clear now, boy.” Good for you, Izzy! Listen — people hook up on boats ALL THE TIME, but James and Elizabeth should have taken it elsewhere… especially considering Izzy’s current health.

The next morning, Captain Lee calls Francesca and Eddie to the bridge. After much thought, Captain Lee has decided Delores has GOT to go. Regarding the rest of the group, the captain asks to speak with them so they can arrange their priorities. Captain Lee explains if Delores leaves, they can stay. And they agree to that deal! What kind of friends are these people? Your friend gets kicked off the boat, but you can stay and you actually DO stay? Delores acts as if she isn’t surprised that she is getting booted from the yacht, which is shocking based on the way she pretends like everything is okay. (To be fair she may not even remember, considering she was so smashed the night before…)

Captain Lee sends Delores packing and ships her out on a tender as her “friends” wave goodbye to her. But Delores isn’t going away without a fight. She legit hopped off the tender and jumped in the water as if to say one more time, “DILLIGAF!” What is this lady, part mermaid?! Why the excessive swimming? And this time, she can’t even use the excuse of being drunk… or can she?

What exactly is Delores trying to prove? Clearly, Captain Lee made the right call by getting that liability off the boat! Should just make her swim to shore and teach her a lesson…

An annoyed Izzy tells Rob and Eddie about the Elizabeth and James hookup. And Ash lets Francesca know that Izzy came into her bunk at 3:30. Naturally, Francesca takes this nugget of information and puts it in the “fire Elizabeth” folder.

But really — what planet does Elizabeth live on? How could she just walk into the kitchen and not say sorry to Izzy for the night before? OF COURSE Francesca uses this as a chance to pounce on Elizabeth. She is on a “warpath” and wants to alert Captain Lee of the bunk behavior the night before. THANK GOD Eddie talked her out of it. #voiceofreason.

Turns out that these guests are pleasant now that Delores is gone. Wish we could say the same about Izzy’s behavior towards James. She is P*SSED at him and is not hiding it. Eddie lets James know that it is important to keep work and pleasure separate. Eddie is SO the deck dad. He reminds James to be nice to Izzy, the way a dad would remind a son or daughter.

Side note — I have said it before and I’ll say it again: Rob is a robot. Hearing him explain his bromance with James is hilarious.

While the guests are busy riding horses on the beach, Rachel preps for the seafood extravaganza. The guests are so happy with how the day turned out and even go as far as inviting Captain Lee to dinner (again). He agrees… unhappily, but ever the gentleman, he will attend.

I understand that Elizabeth and James should have been more sensitive to Izzy not feeling well, BUT why is a boat-mance suddenly such a no-no? Every season I’ve ever watched has had a hookup, and now here we have Francesca giving James and Elizabeth a sex talk. Should Eddie be reminded he once had a fling on board? It’s a bit hypocritical, and it is evident that Francesca is grasping at straws to try and give Elizabeth the boot. Eddie and Francesca end the convo with hookup all you want, but don’t let it get in the way of your work.

James has decided he should just embrace this potential new relationship now that essentially everyone knows about their romp session. “The secret is out. Me and Liz are dating! It’s like a Romeo and Juliet story!” LOL. Don’t say that around Rachel. She certainly does not approve of that relationship.

As the extravaganza begins, Captain Lee sits down to eat and Izzy gets sent to bed. She is not getting any better. And neither is the relationship between Francesca and Elizabeth. Francesca TELLS Elizabeth to take a break because her feet hurt her, but when Elizabeth actually takes Francesca up on it, she gets reamed out. Elizabeth can’t win here. Especially when Francesca snippily tells her, “Stop talking when I’m talking.”

It’s the final day of charter and that means goodbye to these guests. Eddie sends Izzy back to bed since she is STILL sick, and he lets the captain know the deal. Captain Lee explains that Izzy has to be isolated and that she should go in a guest room for the evening. TBH, having your own room doesn’t sound too terrible on this yacht, especially if it means getting a break from James and Elizabeth!

When the guests say goodbye, the primaries hand over an envelope, insinuating that the tip is hefty. They review the charter and get an OKAY tip. Seems as if Delores did not pay her part before she was removed from the yacht. Captain Lee ends the meeting by telling the crew that he arranged a day off at a beach club the next day. He is pretty much the coolest boss out there.

That night, Elizabeth and James go on a date, and it’s awkward and cheesy and perfect for them. Elizabeth calls herself an old, Italian grandmother and she tries to find connections with this kid. While the couple gets to know each other, the rest of the crew play truth or dare on the yacht. Good, clean fun… except naturally Rachel drinks too much and gets annoying.

It’s the day off for the crew and that means beach club relaxation! Pretty sure Rachel is still drunk from the night before. She is OBNOXIOUS and Eddie is trying to stay as far away as possible. It appears as though everyone feels the same way. Although I would be running away from Izzy, too! Can’t believe they actually allowed her to join the gang on the beach as sick as she is.

Rachel spirals out of control and her heavy drinking gets her WASTED. I wish someone would just stick a cork in her. Everyone is relaxing, enjoying their day off, but there goes Rachel… off to find the smooth, live music. She invites herself up on the stage and yells in the microphone, “I want some dirty nasty a*s music.” YIKES. Francesca jumps in to save the sinking Rachel, who is embarrassing everyone with her ridiculous behavior, but Rachel is not having any of the removal.  Will she woo the beach club with a surprising angelic voice or will she make a fool of herself and the entire crew?