Home Real Housewives of Orange County News RHOC Finale Recap: The Women Call Out Braunwyn Who Is On The Defense; Plus Shannon Defends Her Relationship 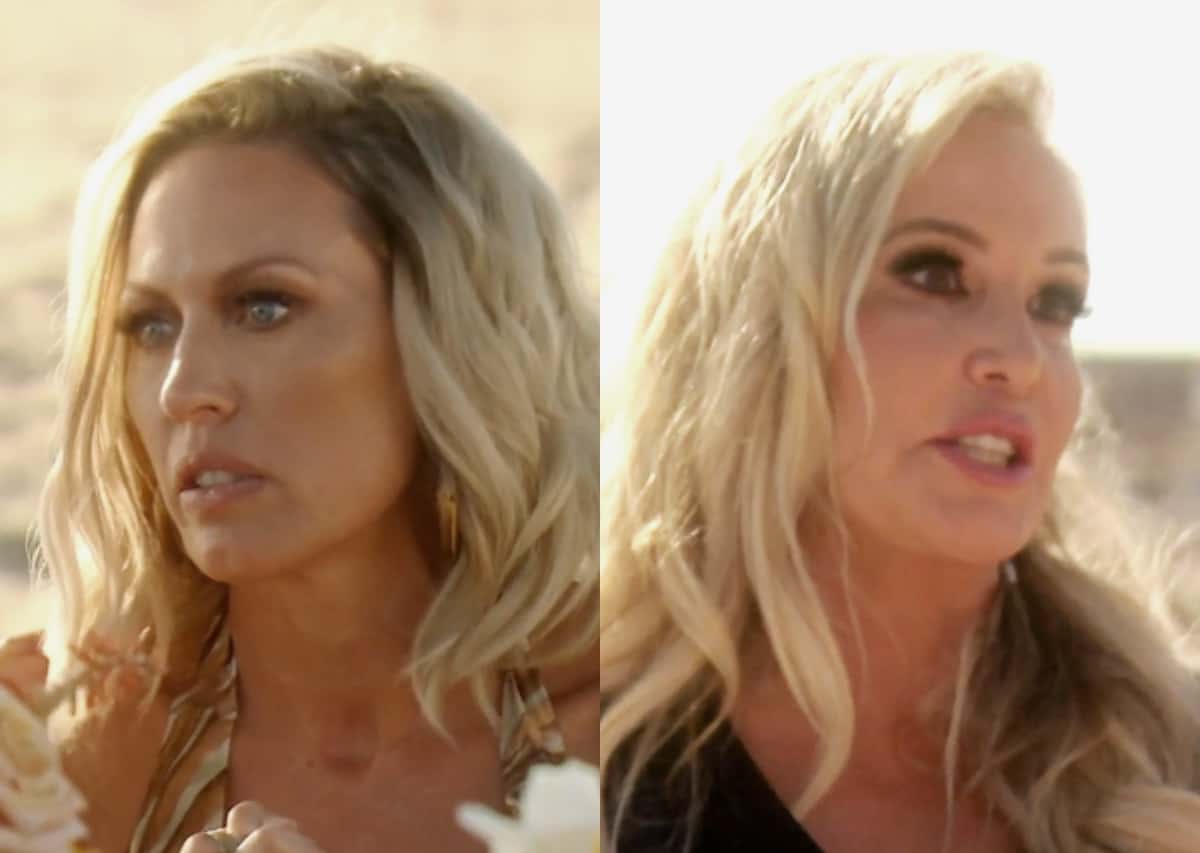 Well, this season of the Real Housewives of Orange County has been… interesting. There was COVID, sobriety, cults, and new romances, and throughout all of it, these women always remembered the key ingredient to any successful season: stirring up the drama.

Because every season finale must end with a party, Emily is hosting an end of summer beach party… at Elizabeth‘s house. Essentially, Elizabeth’s house is serving as Emily’s venue. Kind of weird.

Gina comes over to Emily’s, and the ladies take the conversation outside, far away from the lame message in a bottle invitations. Emily lets Gina know that Gina is on Shannon‘s sh*t list. Shannon is mad that Gina did not check in on her relationship with John, BUT Gina still has not had a problem letting people know that things aren’t rosy between Shannon and John.

Gina and Emily agree that a friendship with Shannon is one-sided, a point that Tamra brought up often in seasons’ past. Emily suggests that perhaps Shannon vents to Gina when she’s had too much tequila, thus highlighting only the negative aspects of her relationship with John. Whatever the case may be, Gina is tired of it and tired of the fact that Shannon “clearly doesn’t really give a sh*t about” her.

Shannon has only three days left before Sophie heads off to college. Kudos to the producers for the 75 Shannon talking heads rattling off her list of fears for her daughter. When John shows up for dinner, I am shocked. I can’t believe that he has decided to legit stick around with Shannon. Over dinner, Shannon makes a toast to Sophie where she dwells on all the stuff Sophie did not get to take part in this past year. Ya know, normal stuff… like being robbed of her debutante ball. Blasphemy! BTW: Shan, Sophie has a smile on her face because she CAN’T WAIT to get away from you!

Looks like Rick really does balance out Kelly. If he can talk her into having a small, intimate ceremony (for her THIRD marriage), then maybe she will actually listen to his advice regarding Braunwyn. Kelly is annoyed by Braunwyn (especially now that she is sober), and Rick suggests that Kelly have a chat with Braunwyn, even though Kelly does not think she is “authentic.”

Elizabeth has a therapist come to her house (ah to be rich!), and it doesn’t take long for Elizabeth to dive right into her childhood. Elizabeth explains that she has had some sexual trauma and finds that she compartmentalizes things as a coping mechanism. The therapist looks shook as Elizabeth tells her story. Elizabeth is uncomfortable with sharing this information and she wishes for acceptance. She doesn’t want people to think she is weird, but it may be difficult because Elizabeth doesn’t really even know who she is. This is gonna be a long process…

It’s the day of Emily’s beach party (at Elizabeth’s house). Funny how you almost forget this season took place during a pandemic until you see the party planners masked up, taking directions from Emily. OF COURSE, Braunwyn doesn’t want to attend, but OF COURSE, her roommate and BFF, Shari, is there to help her slip into her dress. In her confessional, Braunwyn states she is committed to having a future with Sean, but I am pretty sure those “feelings” she is talking about have to do with other women…

So Elizabeth’s brother came to visit to be the bartender at the season finale beach party? LOL. The ladies all roll up and Braunwyn has her boobs on display for all the world. She essentially throws a gift at Emily for being the hostess, but Braunwyn isn’t the only one who brought something.

Fun Shannon gives each woman a mask with a quote they have said over the course of the season. “Not sad or depressing.” “Foot in Mouth.” “Cheers to Good Choices.” Ya know, things like that. The women all get a good chuckle over this, mainly because it is apparent that none of them even wear masks with the amount of COVID positive cases among them.

The drinks start flowing, courtesy of Elizabeth’s brother, but Gina hangs back to talk to Braunwyn. Braunwyn casually slips in that she is going to be starting school to become an alcohol and drug addiction specialist. Perhaps she should fix her own life first… Also. Baby steps, Braunwyn. You’re new to this sober life…one foot in front of the other.

As the ladies make their way down to the beach for the food, Kelly readies herself for an attack on Braunwyn. I am pretty sure this is not the way Rick meant for Kelly to approach the situation…

Look at Emily go stirring up the drama as she walks to the table with Shannon and Gina. She blurts out, “Braunwyn tells me lots of things about your relationship with John.” Turns out that John doesn’t play golf and doesn’t even WATCH golf, so technically Braunwyn lied… but that doesn’t stop the women from sharing their concerns about Shannon and John.

Shannon is trying to make her argument with Gina, but she is stuttering over her words because she has to realize how ridiculous her manufactured fight with Gina is. Emily tries to help Shannon justify her venting to Gina by saying “maybe when you’ve had a few drinks” Shannon shares more than she normally would. Shannon admits to having issues with John during their quarantine. Emily reminds Shannon that things don’t have to perfect, and of course, Shannon turns on the waterworks.

She explains that she almost had PTSD when things went south with John. “I put this fairytale label on the relationship,” and now she realizes that there is really no such thing. So interesting to watch Shannon get shaken up when people question her, yet she goes in hard when questioning others.

In the meantime, Kelly wants to know why Braunwyn essentially doesn’t share personal information with her. Before hearing whatever excuse Braunwyn was going to spew out, Kelly shrieks and yells to Braunwyn, “You don’t make sense.” The wheels fall off at this point. Everyone is coming at Braunwyn from different directions, and it’s almost as if the producers said, “NOW PURGE.”

The truth and the lies are spilling out so quickly now that it’s hard to decipher which is which. Elizabeth shares her annoyance with Braunwyn because she played her out via text. Braunwyn lets the women know that maybe it’s because Elizabeth talked sh*t about Braunwyn and her relationship with her children. Checkmate. Braunwyn states, “I have boundaries. I took a step back from the friendship.”

Funny how Braunwyn is making the rules here and choosing who the bad guy is… considering SHE was the one who went snooping into Elizabeth’s finances. Regarding that topic, Braunwyn throws Shannon right under the bus. She equates Shannon to a mafia boss who forces other people to do the dirty work so she stays clean. Do these ladies need to be reminded they are grown-ups and you actually don’t have to be forced into doing things by your “friends?”

The spotlight is shifted to Elizabeth, who the women believe “there is a level of compulsive lying that’s imbedded” within her. Take, for instance, Elizabeth trying to call Vince Neil of Motley Crue to win over Shannon. That wasn’t Vince… hell, it was probably just some random number she dialed to try and seem important!

Kelly wants everyone to be honest and the hard questions are starting to get answered. Braunwyn states that there is some “big sh*t” going on in her life and that she likes Shari around. Braunwyn adds, “I kinda need to be selfish now.” So, that vow renewal with Sean meant nothing, right?

Wait — didn’t Braunwyn JUST say one of the major issues between her and Sean is that he is always on his phone… but, she then says she is always on Instagram. Interesting… Now they are attacking Braunwyn for saying she is having a hard time living in such a conservative area. Answer me this: Why does Shannon CARE if Braunwyn doesn’t like Newport? Braunwyn retorts, “I hope I can be a beacon of light for other people” living in Newport, but the ladies aren’t buying it. Without getting all political, they insinuate that Braunwyn isn’t who she tries to be on social media in real life.

Luckily, in order to change the subject, Shannon shows her taped up stomach. Talk about comic relief.

As everyone’s “partners” make their way onto the beach, a few questions pop up in my mind, like why is Sean there as Braunwyn’s person and not Shari? And where is Rick? Emily makes a toast and summarizes each woman’s journey because she has obviously taken over the role as the boss b*tch this season.

Gina promises to make an impact statement at Matt’s upcoming trial and promises to relax with the crazy hairstyles. That’s all in writing now, so she better stick to it.

Braunwyn is six months sober and “redefining her marriage.” In her final confessional clip, she comes out as a lesbian, which is not entirely shocking, but she no longer speaks to Shari, which blew my mind.

Elizabeth explains she is a survivor and is now one of the richest in Newport Beach, thanks to her ex-husband. I wonder if now she can get Vince Neil’s real phone number??

Shannon claims her relationship with John is stronger than ever (which is exactly what people say who are having a rough time with a significant other).

Kelly is officially Mrs. Leventhal. Managed to have a wedding during a pandemic on the date she always dreamed of: 10/10/20.

Cheers to all positive things… and negative COVID results for this motley crew of Orange County.