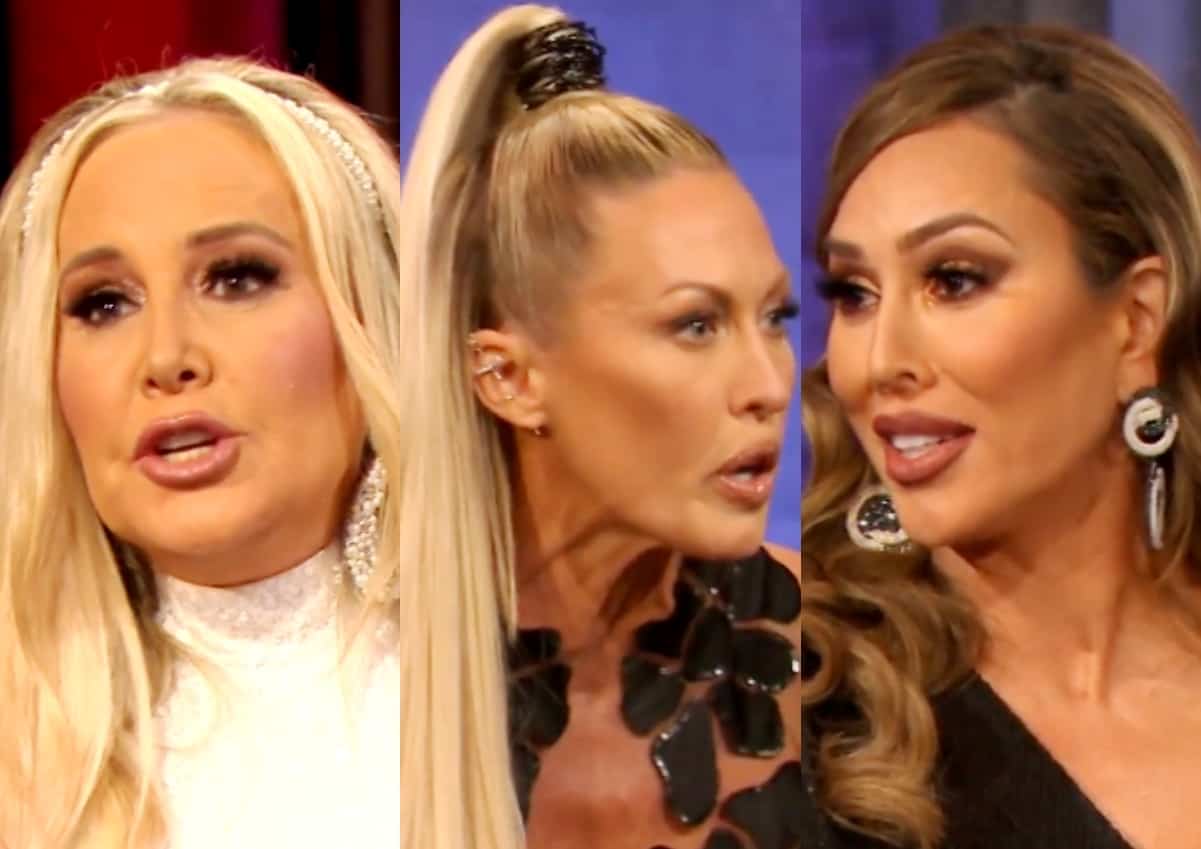 The set is sprayed with disinfectant. The women are taped up, glammed up, and ready to clear up any rumors that have spread over the course of season 15. On part one of the Real Housewives of Orange County reunion, there’s a lot to cover, but the ladies are not going down without a fight…

It’s a good thing the ladies are so far apart… who knows if one of them will throw a punch before the reunion is over? Andy is there, as always, to greet the women. Kelly is officially Mrs. Leventhal, and Shannon is going for a ’70s figure skating lewk. So bad, right down to her tights. Gina’s finally figured out to handle that HAIR and Emily is implant-less, looking like Khloe Kardashian’s doppelganger. Braunwyn claims she is rocking “lesbian chic” in her combat boots, and then there’s Elizabeth, who is just nervous for her first reunion. Cute.

Andy jumps right in to remind us of some of the earlier times. Oh, yea… remember when Gina got a creepy text from Sean? And remember when Gina called Braunwyn a “sloppy chihuahua?” And then they somehow became friends? Lots to unpack there… and my oh my, how the times have shifted.

The first issue to tackle is Gina’s “small, sad home.” Gina laughs this off and promises that Shannon was genuine during the tour of the condo. Shannon continues to deny she made those claims to Braunwyn, and when Braunwyn attempts to say her side of the story, Shannon yells at her for deflecting. The girls waste NO time ganging up on Braunwyn.

Gina then explains why she was weirded out by Sean and describes her interpretation of the text messages. Braunwyn makes it clear that although she has had threesomes with Sean in the past, it has always been *her* idea (obviousllllllly), and therefore, there was no way Sean was coming onto Gina.

Emily becomes emotional describing why she defends Gina from Braunwyn. No one buys that Braunwyn is in the business of empowering women when all she does is drag them down. Shannon reminds the world that just because Braunwyn is sober now, that doesn’t mean her word is bond.

Shannon and John — the relationship that certainly had its highs and lows this season. Is it because John could not financially support Shannon or is it because Shannon enjoys a good couple thousand drinks? Shannon reminds everyone that although she is still with John, John has not met Shannon’s ex-husband because her ex will not communicate with her. Yikes.

Shannon is defending herself again, but this time it’s in regard to Gina’s accusations. Gina claims that Shannon drinks too much and then drunk dials her to complain about her relationship with John. Shannon refers to Gina as “Miss Holier Than Thou” to try and deflect the obvious.

Leave it to Braunwyn to think John has an alcohol problem. Shannon reminds Braunwyn that John hates golf, and she states that because John is a businessman, this is not a good look for him, hence him not appearing at the reunion. When Braunwyn is asked if she thinks Shannon has a problem with alcohol, she responds yes. When did Braunwyn become the alcoholic authority?! Shannon responds to this claim with: “I’m fine. I’m fun. But I’m not an alcoholic.”

While on a break, Shannon calls John to fill him in on the newest Braunwyn trash. She rambles on and on about Braunwyn and then adds, “She’s naked underneath her dress.” LOL. Might be my favorite line by Shannon. Shan teases that she has some serious dirt to share on Braunwyn and that it relates to her daughter, Stella, but she will only use it if she feels it necessary… like ammunition?

When the COVID conversation comes up, Kelly legit hacks up a lung, which causes all of the women to look at her with fear. Kelly is asked about her masking policy, and she retorts to Andy, “Do your pants protect you from a fart?” WHAT. Kelly claims she took this whole pandemic seriously, but she took her “business” trips and still managed to do basically everything she ever wanted to do, pandemic or not.

Andy is hot on Kelly and pushes her to find out her thoughts behind her recent social media posts. It’s hard to hold Kelly accountable for anything really. Kelly defending herself is painful to watch, particularly as she explains her mom’s “symptom-less” COVID case, which landed her in the ICU.

If Shane sending a goodbye text to his eldest daughter as he fought COVID isn’t a wake-up call for Kelly, then I don’t know what is… Emily shares that she will always be grateful for Shannon, as she was a great friend through the trying time.

Elizabeth states that she was warned to be careful of the housewives as she entered her first season. In case you were wondering, Elizabeth STILL has not donated the Ferrari, and she is still upset about explaining her sex life with her boyfriend on national television.

Elizabeth states she will love her ex-husband for the rest of her life, essentially because he made her rich. Let’s get real. Leave it to Braunwyn to drop a bombshell as Elizabeth cries her eyes out about this guy. Not nice. Braunwyn outs the fact that Elizabeth’s ex has a fiancée, and she reminds Elizabeth that she has been divorced for over five years. Talk about pouring salt in the wounds. And look at Braunwyn go again — researching Elizabeth!

Elizabeth is seeing red. “Don’t judge me with your narcissism and your two-faced personality.” When asked why Braunwyn researched Elizabeth, she blames it on Shannon. And all of the women scoff at Braunwyn “lying” again. Elizabeth goes as far as saying that Braunwyn is the worst lesbian ever because all she does is bring women down, particularly if it means she gets something from it.

Watching the Braunwyn segment is a strong reminder of how much this girl has changed over the course of the season. Braunwyn explains that being on this show has made her accountable with her drinking. Emily wants to find out the difference between “not drinking” and “getting sober.” Braunwyn states that she’s an addict and the ladies jump on this and chuckle that she is CERTAINLY addicted to fame.

Kelly strongly believes that Braunwyn is a fake alcoholic and Braunwyn yells back that she is a “functioning alcoholic.” Kelly claims that things are contrived with Braunwyn, and when Andy confronts Braunwyn about narcissism and she states, “I just have a very large ego,” it is starting to become clear who Braunwyn REALLY is.

All of the women state they feel bad for Sean and I have to agree. Although Braunwyn seems a little *off* in her actions, Gina and Emily step in and say they have seen Braunwyn in action at her AA meetings, and things seem legit.

Shannon states she had no idea Braunwyn was an alcoholic, which is odd considering she spent a lot of time with her and Sean. Braunwyn would even attend barbecues at Shannon’s!

Shannon then reveals a secret that she has been sitting on for nearly two years that occurred at one of those said barbecues. Braunwyn apparently went up to Shannon’s 14-year-old daughter Stella (who is now 16-years-old) and said, “If you want the good stuff, text me.” WHAT. I’m sure Braunwyn will blame this alleged action on the booze, but we will find out more next week…

TELL US – THOUGHTS ON THE RHOC REUNION PART ONE?