RHOC Reunion 2 Recap: Braunwyn Reveals Sean Had Another Woman in His Bed and Cries Over Claim She Offered Drugs to Shannon’s Daughter as Kelly Explains Her Infamous Drunk Wives Matter Hat 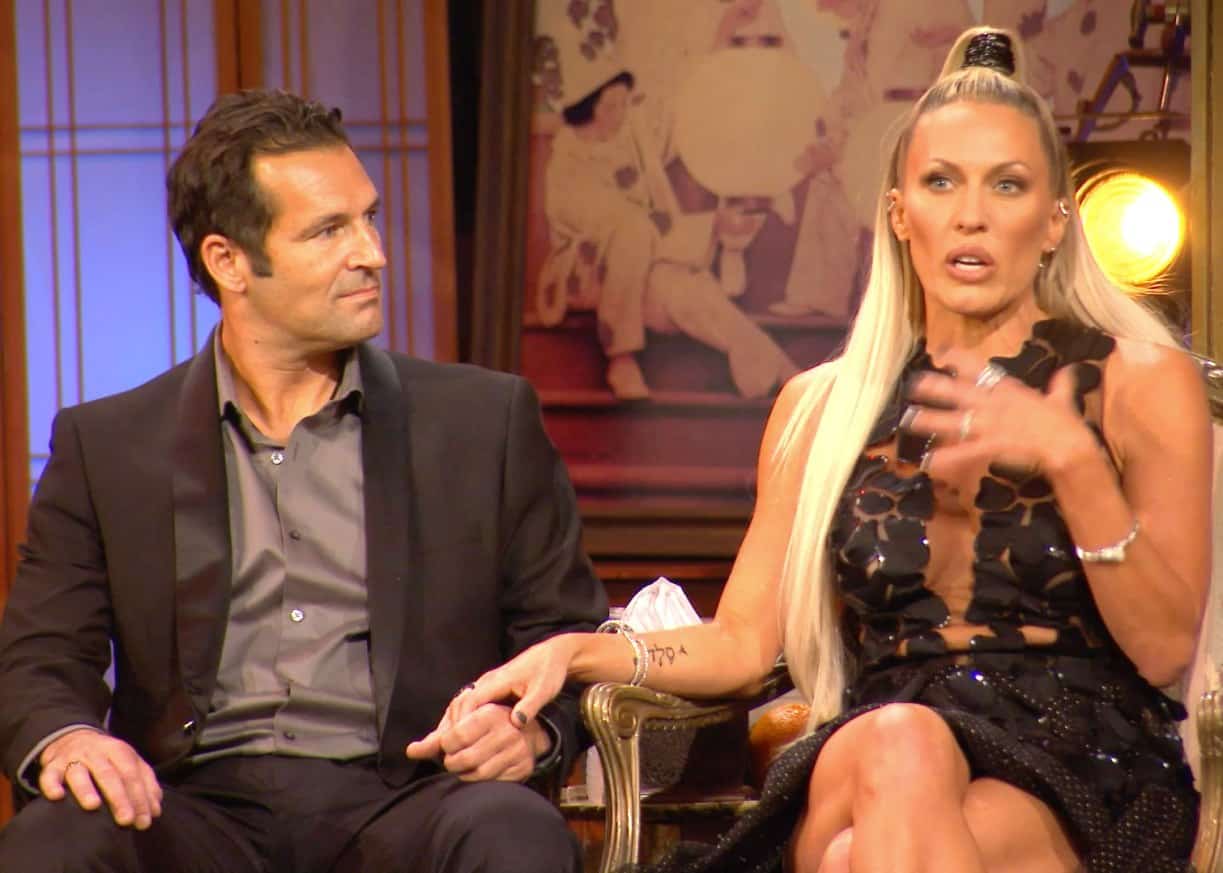 It’s a fight to be heard on part two of the Real Housewives of Orange County reunion. We are still learning about some of the women as personal tidbits come out, and we are still trying to understand just how Braunwyn’s marriage works…

So we left off last week with Shannon dropping a bombshell. Apparently, Braunwyn told Shannon’s then 14-year-old daughter, “If you want the good stuff, text me.” Braunwyn gives a simple “I’m sorry” to Shannon and blames her drunkenness for that comment. She further states she can’t say for sure if she ever said that to her own children, too. Kelly is baffled by Shannon “understanding” Braunwyn’s apology, and Andy steers the conversation in a completely different direction, which makes me think that he doesn’t want anyone to focus on the fact that Braunwyn offered drugs to a kid.

ANYWAY. Watching Gina‘s hair over the course of the season is cringey. She is a good sport when they put up the pics of her hairstyles, but man, she had some awful “styles.” On a more serious note, Gina explains that currently, she is co-parenting really well with her ex, Matt. She is proud of the fact that Matt can handle the truth about the past situation, yet he is able to be a good partner when it comes to the kids. Gina says that she is still having a hard time standing up for things that are unacceptable and that she still plans to give the victim impact statement to heal.

If Matt does accept the plea deal, it would likely be home arrest, so Gina is trying not to have to inform her kids about the jail time Matt might’ve potentially faced. Gina thinks that she is going to be okay with Matt and becomes emotional… which causes the women to ask for a bathroom break. LOL to Andy skipping over Kelly when stating how happy he is that the single ladies have all seemed to have found “good ones.”

Before exiting the stage, Braunwyn has an absolute meltdown because the reunion isn’t about her for a minute. She runs off basically hyperventilating and Emily does her best to try to talk her off the ledge. Interesting timing with those tears, Braunwyn.

The cast member we all love to hate: Kelly Dodd. We find out that Shannon’s boyfriend, John, and Kelly’s husband, Rick, love each other? Are Shannon and Kelly becoming the dos amigas? Regarding Kelly’s 28-person wedding controversy, Kelly states, “It’s okay to protest, but I can’t have a celebratory wedding?” Whoa. And so it begins.

When asked if Kelly should be more sensitive about the protests considering she is a Mexican American, Kelly states she has no problem if there are protests, but they must be peaceful. When Kelly’s drunk wives matter hat gets called into question, Kelly attempts to explain that she didn’t do it to mock the BLM movement at all. She cries that she is attacked by haters, and she says that four of her best friends who are African American had no problem with her hat. She just pulled that card…

Kelly shuts down Braunwyn’s background noise by yelling, “you never did anything for black people before this,” and she states Braunwyn is simply protesting and posting about it because “it’s trendy.” Emily jumps in and yells that it’s not fair to say the other women don’t protest or make statements. They are just not as showy about it. They don’t, ya know, hire a professional photog to snap pics of themselves at BLM protests, that’s for sure.

Kelly reaches her tipping point and yells out, “OH MY GOD. I’M BLACK. I’ve been doing things for Black people way before.” When Andy asks her if she identifies as an African American, Kelly stutters out a no, but she does say she did experience racism because she is Mexican.

Shannon gets called out for being pretty quiet about all of this, and to that, she retorts, “I was raised that you keep your political beliefs to yourself,” — Shannon, I am not a political person, Beador. Tells us exactly who she is…

When Braunwyn tries to explain what she meant by saying she can’t talk to any of her castmates about her sexuality or political beliefs, the women jump down her throat. Kelly shouts out that all her friends are gay and Emily reminds Braunwyn she attended a drag show for Braunwyn’s son, Jacob.

Not to be outdone, Elizabeth slips in some info: “I’m bi, but whatever. I’m a non-practicing.” When the ladies’ eyes pop out of their heads, it is plain proof that what Braunwyn said is somewhat true. Dying over Gina responding to this by saying under her breath, “Practice it? What is it, a violin?” ALSO. Braunwyn tried kissing Elizabeth? How bout they just go ahead and date in season 16…?

The girls’ trips this season were weak, but one of the biggest parts of the Lake Arrowhead trip was when Elizabeth outs the fact that she grew up in a cult. Elizabeth is frustrated that this part of her life is on the show, but she was the one who brought up the religious abuse. Elizabeth’s grandmother was the founder of the cult and her dad was the pastor. Gina and I have the same exact face as Elizabeth explains her escape.

Elizabeth panicked when she shared her truth since she tries so hard to have a perfect life and wanted the cast to accept her. Emily explains that the women want the vulnerable Elizabeth. Therapist Braunwyn invites Elizabeth to a meeting with her (of course) and Elizabeth ends the convo by saying she is not the victim.

Sean comes out (after Shannon is reminded who Sean is — LOL) and holds hands with Braunwyn, immediately displaying that they are a joint force. Remember when Braunwyn and Sean had a vow renewal? That was cute. Andy wants to know why Braunwyn chose NOW to come out as a lesbian. Braunwyn comes clean and says she has never been attracted to Sean physically and the poor guy just sits there.

Braunwyn talks about her open marriage and how she went on a trip with Shari, her then best friend/potential love interest. It turns out that Sean had another woman over and in his bed while Braunwyn was with Shari… yet, somehow, Braunwyn got mad about it. Everyone is DYING to know the rules about this one-sided, dysfunctional marriage and it just doesn’t add up. I mean, how could Sean continue holding Braunwyn’s hand as she talks about her 28-year-old girlfriend? How much therapy has he had?!

Braunwyn is 100% calling the shots in this modern marriage and “the boundaries meet where Bruanwyn allows them to be.” Hooray for Gina for bringing up the fact that Braunwyn hit Sean twice. Braunwyn tries to shut Gina down, but Gina pushes forward. Braunwyn insists that she has “made amends to him, I don’t need to make amends to anyone here.” WOW. Saint Sean is there just taking it, donning his vow renewal statement necklace. Those poor children.

The mocktails get delivered and Andy wants to know one thing each woman has learned this season. Kelly volunteers to go first. She essentially says her lack of fear from COVID has helped progress her year in a positive way. Shannon says the little things in life are the most important. Emily realizes how important family and health are. Braunwyn learns that she still has a “looootttt of work ahead of her.” Elizabeth also shares that the materialistic things don’t really matter, and Gina has learned to let go a bit and that she can only control so much.

Emily stands to make the final toast and she talks about supporting everyone on the stage and raises her glass to women empowerment. Cheers to that, girl. Let’s see what this new year brings for this bunch.

TELL US – THOUGHTS ON THE RHOC REUNION PART TWO?