Home Recaps RHOSLC Recap: Meredith Confronts Jen Over Spreading Rumors About Her Marriage and Jen Lashes Out At Whitney

RHOSLC Recap: Meredith Confronts Jen Over Spreading Rumors About Her Marriage and Jen Lashes Out At Whitney 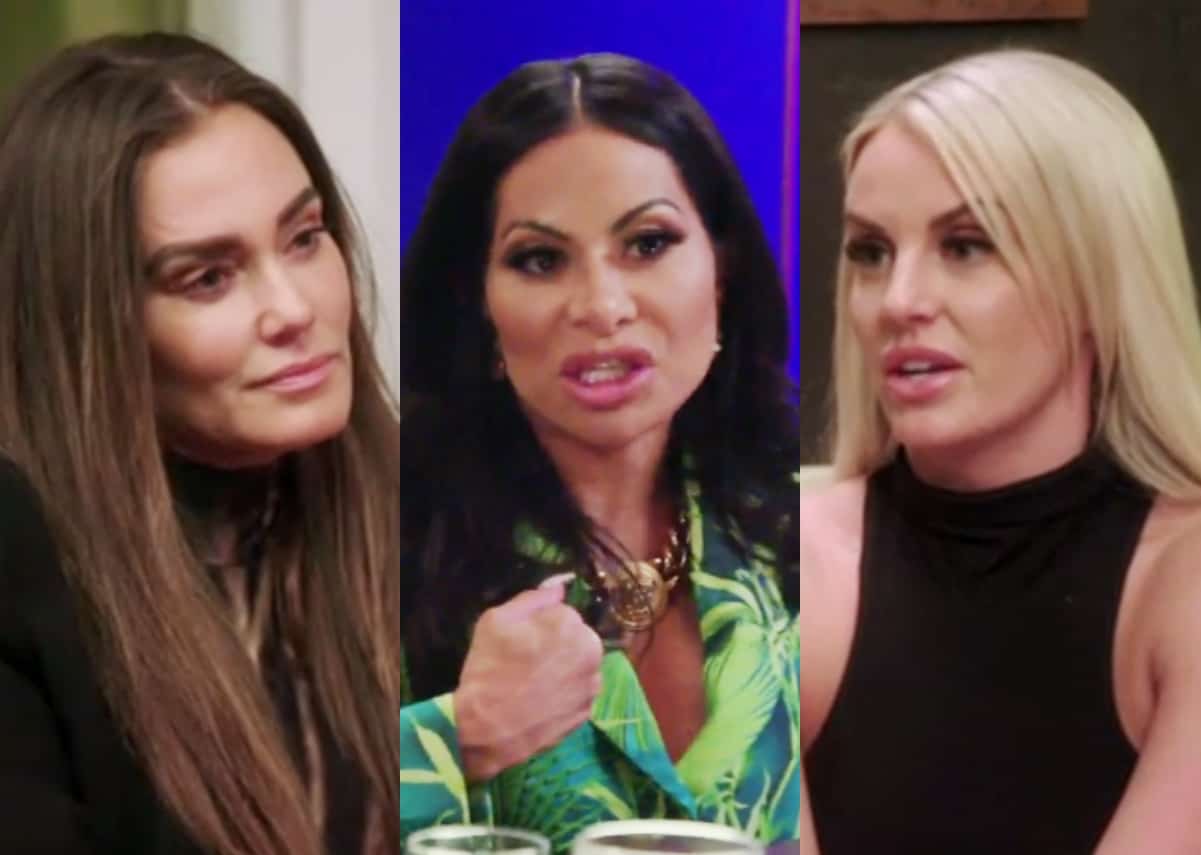 Howdy ho, Blurbers! Welcome to the penultimate episode of Real Housewives of Salt Lake City season one, where we’re back to one of the most awkward Vegas girls’ trips I’ve ever seen.

Last episode, Whitney Rose had to do a lot of ass-kissing to get back into Meredith Marks’ and Lisa Barlow’s good graces, but poor thing doesn’t know that little Miss “You’re Not My Friend Unless You’re Not Her Friend” Jen Shah still has it out for her. We left off with Heather Gay looking terrified by Jen’s tirade about Whitney, so let’s jump right back into the action!

We’re back in Las Vegas, and the ladies are getting ready to go to a strip club dinner thing. Heather hobbles over to Whitney’s hotel room, and she wonders if she’s overdressed in her head-to-toe brown velvet suit when she sees Whitney bouncing and jiggling in mom jeans. Whitney says the racetrack went GREAT, and she jokes about School Zone Barlow’s slowpoke driving.

Meredith and Lisa are the first to arrive at the dinner table, and I am perplexed by what looks like a punchbowl with a parrot floating in it. Lisa raises a toast, “Chaars to us and our racing skells.” Meredith’s eye-roll in her talking head is priceless. They both think the conversation with Whitney went really well at the racetrack, and they are ready to move on and have fun on this cursed trip.

Up in the room, Whitney excitedly tells Heather about her reconciliation with Meredith and Lisa, and she thinks this trip is going to be amazeballs now that the whole group can celebrate each other’s love! Heather gives Whitney THEE look of dread, and she painfully shares that Jen is still mad about Coach Shah’s party… and possibly wants to kill her. Whitney — rightfully — is totally confused.

Jen is the next to arrive at dinner, and she looks like she’s in good spirits at first, but once Lisa mentions that Whitney apologized on the racetrack, her demeanor changes completely. Lisa asks Jen if everything is okay between her and Whitney, and here we go again. “I felt like her apology was sincere, but there are still are some other issues, and I just want her to be accountable.”

Lisa responds, “I think it’s fine if she’s accountable with you, but I’m good with her, just so you know.” Jen blurts out, “How can you be good with her when she threw you under the bus to me?” As Meredith and her eyebrows of destiny look around for the exit door, Lisa explains, “Well, Whitney apologized. In her head, she thought she was trying to stick up for Mary Cosby.” Jen is still hung up on Whitney, and for the love of god, MAKE IT STOP. It was only two episodes ago that I said I was still rooting for Jen, but this… whole… whatever is happening, is NOT a good look.

Jen angrily yells about picking sides, and Meredith decides to leave because she has had enough and doesn’t want to engage anymore. On her way out, she says, “No one tells me who to be friends with.” Meredith tells us that she grew up with a lot of volatility around her, especially with her contentiously divorced parents, so she gets very triggered with screaming and yelling.

After Meredith leaves, Lisa tries to talk some sense into Jen, but Jen is already three sheets to the wind, and she blubbers on about grand exits or something. Heather and Whitney walk into dinner just in time to catch Jen going ham on Lisa, and then Jen SWATS at Heather! Everyone say it with me: “What the f*ck, Jen?!?!” She was working my last nerve even before she assaulted Heather, and now I regret ever rooting for her.

Jen points her talon in Whitney’s face and then snarls at Heather, “You chose your f*cking sides.” The ladies are appalled by this violent outburst, and once Jen runs off screaming into the night, they try to discuss what the hell just happened. Lisa explains that Whitney and Jen still have issues to resolve, and Whitney asks, “Was my apology not good enough? Am I supposed to send a flash mob? Or a singing telegram?” All of those are good questions.

Whitney then decides to fight fire with fire and tells Lisa, “Behind all of your backs, she says stuff about you guys,” and she brings up Jen’s inferences about Meredith’s troubled marriage. Lisa, all red-faced and fuming, snaps, “For her to talk about Meredith is wrong because she sat there and said how loyal she is to both of us, and if she’s saying something about me, you better tell me right now.” Apparently, Jen told Whitney that Lisa was going to come for Whitney on this trip, and Lisa is foaming at the mouth with rage now.

We catch a glimpse of Jen giving Sharrieff her side of the story (which is totally inaccurate, by the way) over the phone. Quick question: What did she not understand when Sharrieff said she can’t control her emotions when she drinks? We saw Jen gulp down champagne from the minute she set foot in Vegas, and then it carried on during her personal shopping extravaganza with Heather, and THEN she drank even more at the dinner table. In the immortal words of Latrice Royale, Good God Girl, Get a Grip!

Everyone but Jen meets up in one of the hotel rooms, and the consensus is clear: Jen is a confusing, volatile tyrant that needs to be stopped. Whitney tells Meredith, “And by the way, she was trying to drop bombs in my lap to get me to say bad things about you and your marriage.”

Meredith pauses for a moment, and then she declares, “Since everyone seems to be so interested, I will tell you. Seth and I have been separated on and off for a Very. Long. Time. At times, I’ve seen other people.” Lisa feels hurt and betrayed by this revelation because Meredith didn’t tell her before, but it’s all out in the open now, so who cares. Meredith says that she and Seth are reconciled now and there is nothing else to discuss.

Lisa asks the group, “Do you really want to be Jen’s friend after all of this? Because I don’t.” Heather, of course, still sees redeeming qualities in Jen, and she is willing to give her the latitude to come back and come right. (I wish I were as nice as Heather sometimes.) Lisa asks, “Does she defend you as strongly?” And Heather says it doesn’t matter because friendship isn’t just about the good times, and you have to take the good with the bad.

The next morning, Lisa FaceTimes with Mary… Wait, what? Mary’s still on the show? I thought she was haunting the basement of Valter’s Osteria or buying clothes on Mars or something. Lisa tells her all about what happened with Jen, and Mary is all, “I told ya so.” Well, how about that? Mary actually called it. She says about Jen, “You can’t understand… crazy,” which… umm… Lady, look in the mirror for a minute or two and take into account that you married your grandpa, clothes are spilling all over every room of your house, and that some former parishioners think you’re running a cult. Now ask yourself, “Who’s really crazy?”

Back in Vegas, Meredith, Whitney, and Lisa meet up, and Whitney has a surprise in store for everyone. (More surprises? Really?) She calls Heather to come down to the lobby, but Heather says she’s about 15 minutes behind, and she tells the ladies she’ll meet them at the destination.

Heather walks into Jen’s room, and #1 Assistant Stuart is there along with Jen’s Shah Squad. Jen asks her assistants to clear the room, and Heather lays down the truth, “Everyone is freaking out about you.” Jen tries to explain herself, but Heather grows a backbone and tells Jen that everything she did last night was totally inappropriate.

Jen thinks everyone is lying to her, and she blares, “SHAH NEEDS AN APOLOGY,” but Heather flat out tells her, “The only person that needs to apologize is YOU.” Heather — along with every single RHOSLC viewer that ever walked the earth — can’t believe that Jen won’t fess up to anything. At this point in the episode, my husband looks over at me and mutters, “Jen is a psycho.”

Whitney, Meredith, and Lisa show up at the house of Kimberly Friedmutter, a hypnotist with a gaudy sense of style who once dated David Hasselhoff! Whitney wants to make a last-ditch attempt to do something positive on this trip, and I just want to shake her. WHY hold a group therapy session in Vegas, Whitney? Why can’t you ladies do normal Vegas activities like sniffing coke off a stripper’s ass, or going to jail? Anyway, in the middle of Kimberly leading a breathing exercise, Heather and Jen show up, and a black cloud hangs over the room.

Kimberly senses a lot of damage has happened within the group, and Jen gets the ball rolling by wondering in the third person, “How come it’s always Jen that gets in trouble?” Meredith calmly states, “The issue was you were trying to tell me who I should and should not be friends with, and the reason why I got up is because you were acting very aggressively.”

Meredith’s not done yet. “It’s contradictory to me to have someone preach loyalty, and then be told by every single person that you’re making very negative innuendos about my marriage. And that’s just a cruel thing to do to somebody.” And for the first time in the series, Meredith’s monotone Leah Remini voice disappears, and she growls, “I don’t get angry easily, but you DON’T want me angry.”

Jen denies that she said anything about Meredith’s marriage, and Whitney is like, “BULLSHIT, you said it.” Kimberly steps in and tells Jen exactly how to apologize, and Jen looks like she wants to punch the hypnotist. Then they all play a “game” of trust, and when it comes to Jen, no one in the room trusts her. Jen is sunk into the couch like a little kid in trouble, and woof, this Vegas trip is a blast, amirite, guys? GUYS??

When this super fun trust game turns to Heather, Jen is the only one that says she doesn’t trust her, and Heather looks like she was shot in the heart. This poor woman has taken so much abuse from her so-called “friend,” and she honestly should just tell Jen to f*ck off at this point.

Whitney decides to move away from Jen, and Lisa chimes in with, “Lass night was beyond uncomfortable. I flat out said no, I don’t want to be your frand. Maybe I’ll change my mind, I don’t know yet. But lass night, I was shook.” Jen tries to defend herself, but it doesn’t work, so she sinks further into the couch.

Next week, on the season finale of RHOSLC, Sharrieff and Jen take a dance lesson, Heather is ready to launch her new Beauty Lab location, and Lisa hashes things out with Jen. Meredith wears a cage on her face, and Mary and Jen are finally in the same room together again. That’s it for this week, Blurbers! See you in the comments section. =)

TELL US – WHAT DID YOU THINK OF THE EPISODE? IS ANYBODY OUT THERE STILL A FAN OF JEN? IS HEATHER A LOYAL FRIEND TO A FAULT? HOW ABOUT THAT HYPNOTIST, EH?