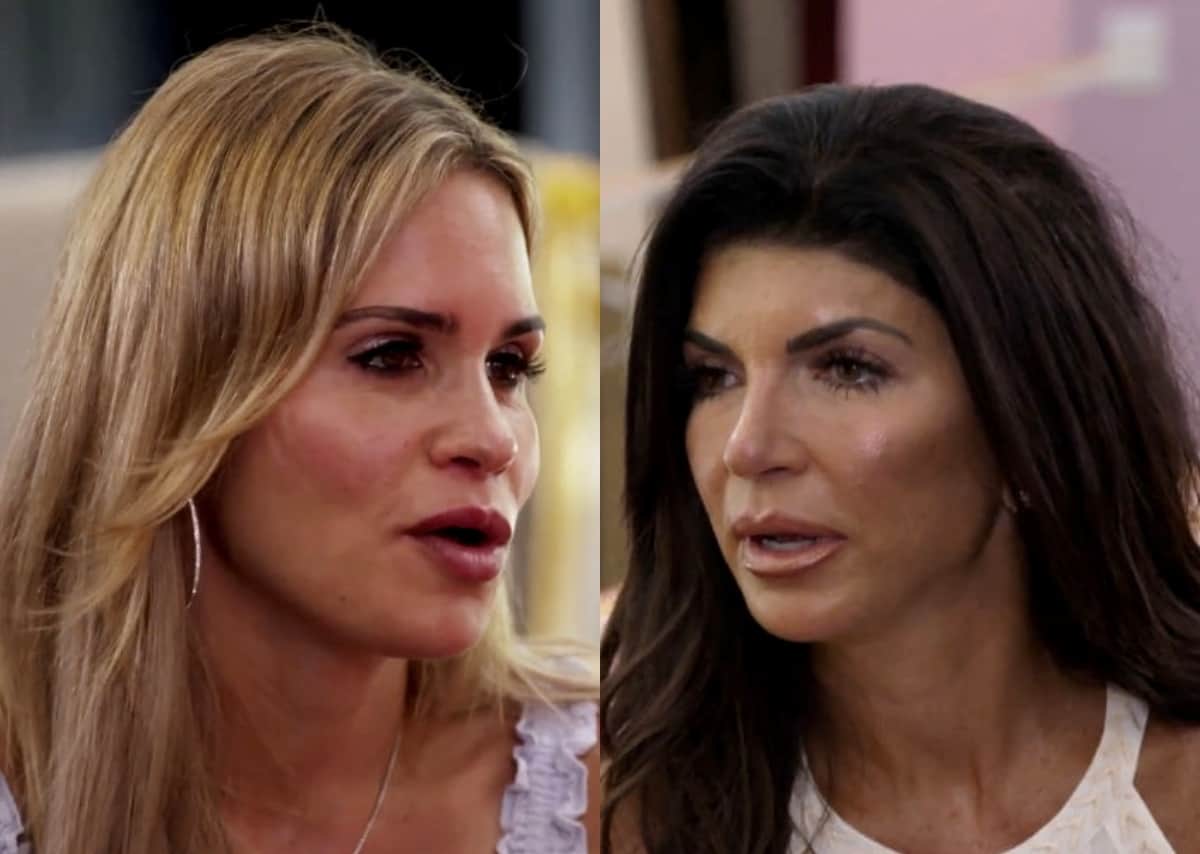 Welcome to the season 11 opener of The Real Housewives of New Jersey! Based upon the previews for this season, we are in for a wild ride with our Jersey broads!

Teresa has a new man and there are again cheating rumors again, but Joe Guidice isn’t the guilty party this time. Let’s find out what they have been up to since last season, shall we?

The episode starts with an explosive argument between Jackie and Teresa. Teresa is running away shouting, “Bleep, bleep, bleep!” We then go back three days to find out what is behind it. I guess we know who production has picked as their rumor soldier this season.

Jackie and Evan are chatting about a party for his birthday. She shares how they have fared during the pandemic. Jackie loved spending time with her family but could have done without cleaning toilets. I think we can all relate to that.

Dolores got a*s implants and Frank thinks she was floundered. She also got a tummy tuck, liposuction, and a butt lift for those new implants. I hate to say it but Frank is right about her a*s looking like it was fileted.

Margaret got a boob job and most definitely had too much work done on her face too. It seems like these ladies like to use the off-season to revamp their looks.

We now catch up with Teresa, and she shares how her dad suffered a stroke. She has now lost both of her parents. That is very sad to have lost both parents. Teresa is FaceTiming with Gia, who is in Cali? Is anyone following COVID restrictions in Jersey?

Our first get-together is for the very handsome Evan’s birthday. He is my favorite hubby on this franchise. Dolores shows up with her ex-ball-and-chain Frank in tow. David couldn’t make it so nothing much has changed from last season. I don’t agree with Margaret that Dolores is the catch of the century. The only reason she could be a catch is that she is a good cook and allows men to practice catch and release on her.

Jennifer, who is wearing a big bird-colored dress, and Bill arrive. It just goes to show having all of that money doesn’t necessarily mean you can buy style.

Margaret, with her perky nipples on display, wants to plan a trip to her Lake George house. What is wrong with her mouth? Margaret talked about trout mouth on Danielle and here she now has one of her own.

All of the house hubbies are gathered to do some shots. Bill, please be careful since you know you can’t hold your liquor! I do like to see him relax and enjoy the party vibe.

Jackie wants to set Teresa up with someone who is half Italian and Jewish. She will regret that act of kindness later. Teresa is already saying she has had too much to drink. It is almost a premonition for what is to come. Teresa will be able to defend the indefensible by crying, “I was drunk!”

While Jackie and Evan are making out, Teresa is green with envy. She is almost like a hammerhead shark swimming through the crowd spreading nasty rumors.

Teresa is asking everyone if they heard if Evan cheats at the gym. She just can’t help herself when she sees someone else happy. Melissa isn’t happy that Teresa is spreading this gossip at HIS birthday party. This is like the worst game of telephone. Teresa hasn’t changed one bit. She is just a miserable human being.

Margaret and Melissa are chatting in the bathroom, and they think that Teresa has just dropped a nuclear bomb. Yep, she sure did, and she is too stupid to realize that she pushed the panic button.

In her ITM, Jackie very naively reflects on what a great event this was. She thinks it was great since they were all in a good place. Just wait until she finds out the trash talk being done behind her back.

Now over to the renovation rehab house, Margaret and Marge Sr. are chatting about the home renovation that started several years ago. She has a husband who is a contractor and her house is still in shambles. Marge Sr. definitely likes f*cking with her face too. Poor Joe B. was overserved the night before and he is recuperating. Production caught him puking behind a tree the previous night. To be hungover and sick like that is the absolute worst!

Joe Gorga and Melissa are still trying to stop Antonia, who will be 15, from growing up. Good luck with that one. Antonia will be having a pool party at the shore house. Is anyone on this franchise following the COVID-19 protocol?

Ok now, we get to see Dr. David AT HIS HOUSE. Frankie Jr., who is just adorable, came home from school to study for his GMAT. He is living with David? Dolores comes over to David’s house that she was never going to live in. David is not happy that Dolores keeps having these nips and tucks. He doesn’t approve of cosmetic surgery. These two have the most awkward relationship and it is frankly cringeworthy.

Jennifer and Bill are having family over for dinner. She has her dad living with them now since her parents have been bickering a lot. Jennifer’s mom has been difficult lately and she had to rescue her dad from her abusive mom. She shares that she isn’t as combative and critical as her mom. The apple doesn’t fall far from the tree, Ms. Aydin. Jennifer admits that they have a very complicated relationship. I agree that Jennifer’s mom has a complicated relationship with her kids since she is in denial over Steven being gay as well.

Jackie calls Teresa and wants to clear the air about what she was saying about Evan. She wants to go to Margaret’s since it is neutral territory. I do think that Teresa stuck her finger in the wrong cage. Jackie is no shrinking violet and she is a wordsmith. Teresa is so out of her league picking a fight with her. She better have her receipts ready.

Jackie has been sick over the fact that someone she invited to her husband’s birthday came to trash him. She said Evan was pissed off over this accusation. I am too since I really like them together as a couple.

Margaret and her assistant Lexi are chatting about the current situation. I am sorry, but I am so distracted by Margaret’s face. Her face seems to be melting and is pooling around her mouth. I don’t recall seeing a facelift result in a look like this. Margaret should have left her face alone.

Margaret and Jackie chat about how hurtful this rumor is. He has a good reputation and doesn’t want it tarnished. Jackie replays, with production’s assistance, all of Teresa’s evil transgressions. There are so many instances where she has tried to destroy other relationships with her vicious tongue.

I hate to see Jackie cry and have to defend her husband to Teresa, of all people. Teresa hasn’t learned a darn thing. She defends her actions with the ridiculous defense that is it commonplace that married men hit on her all of the time. Yeah, I believe that — they just see her as a sure thing since she isn’t the brightest bulb in the box.

Jackie is going to use her mad lawyer skills to disassemble Teresa’s baseless assertion that the rumor is true. Teresa can’t remember or can’t disclose who shared it. She can’t remember if this person even knows Evan and Jackie. Teresa thinks where there is smoke there is fire. Where in her little story was there any smoking gun? The only smoke I see is the smoke Teresa is blowing up everyone’s a*s to start a very damaging rumor fire.

Okay, here comes the bomb! BOOM, Jackie says, “I heard a rumor that Gia snorts coke in the bathroom at parties!” Teresa is going to lose her sh*t over that little tidbit. How does it feel, Teresa? Jackie tries to get her to understand how damaging and hurtful spreading rumors are.  Teresa literally ignited when she heard that! Ms. Guidice, I think I might see some smoke coming from your very large head!

Jackie reminds Teresa she isn’t a stupid girl since she’s a lawyer. She should remind her since Teresa isn’t very bright and rather forgetful. In her ITM, Teresa says that Jackie isn’t in charge here. Is she suggesting that she is the boss around here?

Teresa calls Jackie a c*nt. Well, that didn’t end well, did it? Is the whole season going to be about cheaters? Well, I have to say at the conclusion of this episode that my Jersey girls haven’t disappointed. The first episode started with a bang and we are off to the races!

This season, we get to see Teresa’s new man and Melissa is now cheating? Jennifer face-plants because she STILL seems to be drinking to excess. Jackie is still troubled over the rumors of Evan ALLEGEDLY cheating. I hope everyone is having a good week so far! Be well and take care!

DO YOU BELIEVE THE RUMOR ABOUT EVAN? TELL US IN THE COMMENTS!