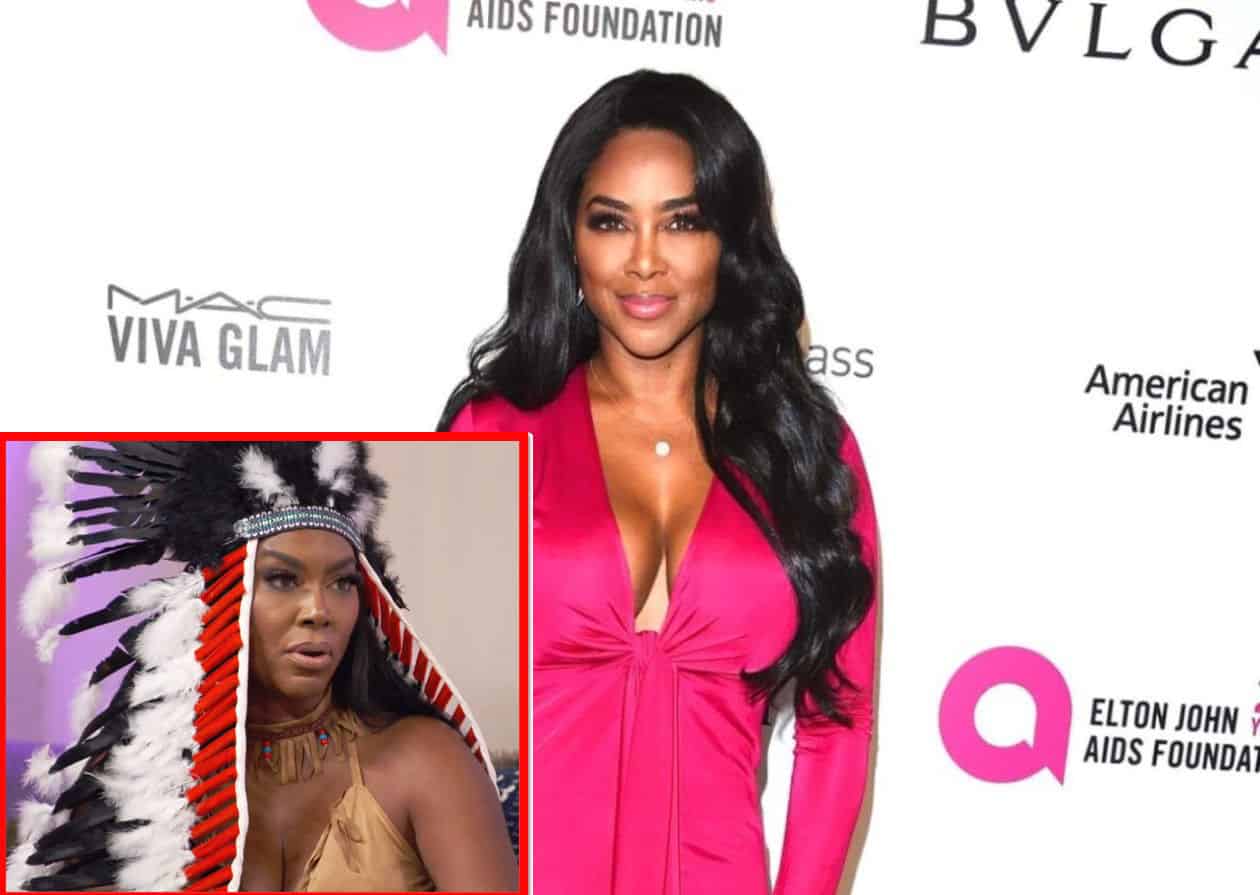 On Sunday’s episode of RHOA, the ladies celebrated Halloween with a costume party hosted by newcomer Falynn Guobadia. It was clear that a few of the cast members put a great deal of time and effort into their costumes, but Kenya Moore‘s choice drew attention from viewers and several of her co-stars.

The former pageant queen wore a feather headdress along with a brown fringe dress, and she called her look “Warrior Princess,” but Bravo wrote “Native American” in the graphic on the TV screen.

As the episode aired, people flocked to social media to accuse the star of appropriating Native American culture as many found the costume extremely offensive. But thankfully, both Kenya and Bravo are apologizing for the blunder with the network releasing a statement first.

“Bravo aims to have the highest standards of respect and inclusivity and we recognize that the recent episode of The Real Housewives of Atlanta, in which a cast member wears a Native American costume, did not uphold those values,” the network wrote and shared via Bravo TV. “We had hoped it would provide a teachable moment, however in retrospect it is clear that the network did not address this properly given the gravity of the situation. We apologize to both the Native American community and our audience as a whole.”

Kenya then followed their lead and claimed ignorance in a statement she shared via Twitter on March 23.

“I want to sincerely apologize for inappropriately wearing the Native American headdress as a costume,” she explained. “I now realize that this was both disrespectful and insensitive and would never have done it if I had that knowledge and understanding beforehand. I regret it.  When you know better, you do better. I am genuinely sorry.” 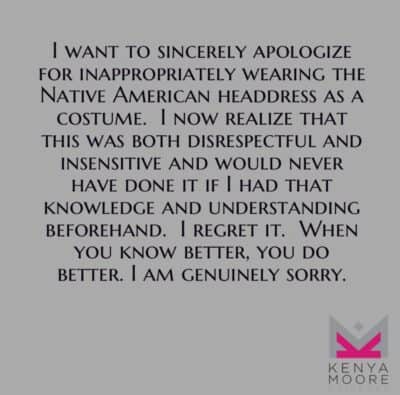 Though Kenya and Bravo have since apologized, Drew Sidora made it clear during the episode that she believed Kenya’s choice in costume was highly inappropriate.

“Kenya’s Native American costume is super problematic but I ain’t trying to ruffle no feathers for this girls trip. It seems like I’m the only one who sees the issues with Kenya Moore’s decisions,” the actress said in a confessional according to Hollywood Life.

Porsha Williams also criticized her co-star, stating, “Kenya is a Native American warrior. I thought we weren’t doing that no more. I knew that this girl was crazy, but add lame to the list. Add whack to the list,” Porsha said in her own confessional.

Kenya was also called out by numerous fans on Twitter, but she initially defended herself.

“I know Kenya didn’t shade Porsha all season about her work with the BLM movement then showing up with an indigenous people costume. 2 strikes,” the person tweeted, but Kenya explained it was ” also part of [her] heritage.” 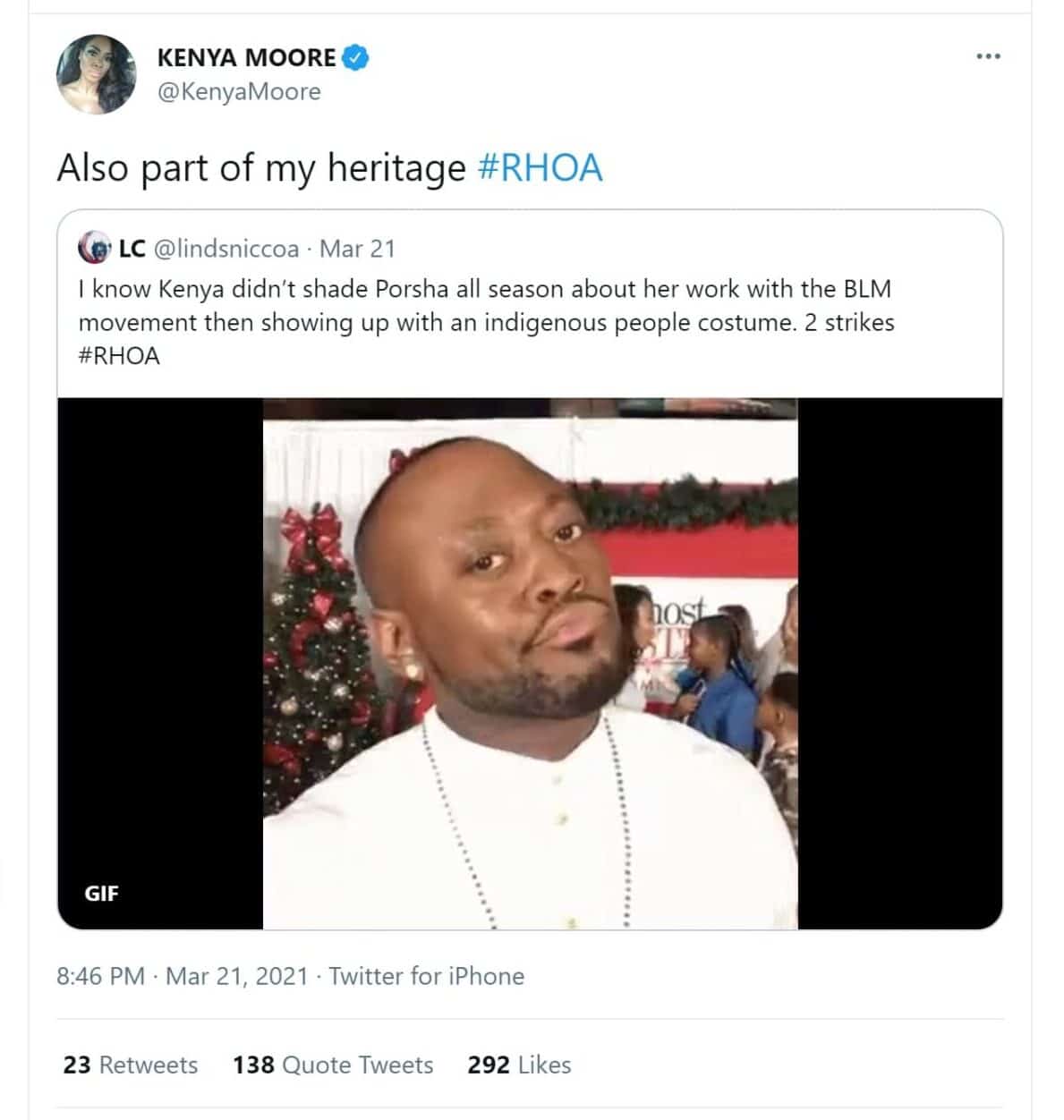 After sharing her explanation, fans attempted to help the star understand why the costume was offensive, which she finally seems to understand.

“Kenya, I identify as Native American and can tell you that our heritage and culture doesn’t mean we use it as a ‘costume’ for a Halloween party, even if it is apart of your heritage that doesn’t make it right,” one fan wrote.

“Whatever. I’ve got 16% German, but you don’t see me showing up for Halloween in a lederhosen,” tweeted another.