Home Real Housewives of New Jersey News RHONJ Recap: Teresa and Jackie Fight it Out Again and Dolores is Questioned on Her Relationship With David

RHONJ Recap: Teresa and Jackie Fight it Out Again and Dolores is Questioned on Her Relationship With David 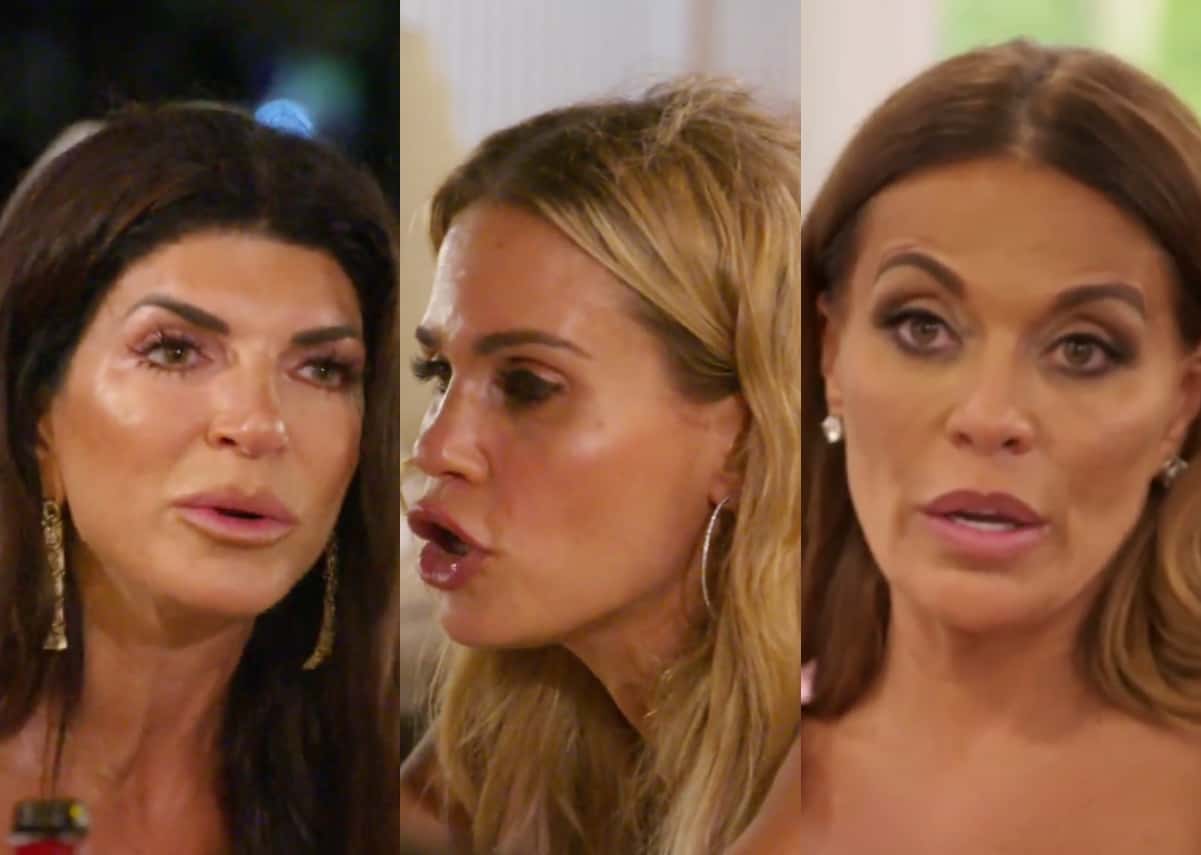 This week on The Real Housewives of New Jersey, Jackie is teasing that this episode is really explosive. How will Jackie and Teresa co-exist? Will there be combustion when these two divas enter the housewives mosh pit? Let’s watch and see!

This episode shows production is trying to change the narrative on Teresa by again incorporating the sad loss of both of her parents. They are trying to make us sympathize with her, but then she just blows our empathy out of the Jersey Shore water into smithereens. I must forewarn you all that it starts slow but it gets to what we all want to see: Teresa vs. Jackie.

Jennifer has to clean up her mess from the previous night. She puked in Bill’s car and it is all over her foyer. I think you missed a spot!

Dolores is home with Frank Sr. and Frank Jr. and her daughter Gabby is in town. Gabby is really doing well and finishing up vet school in Boston. She came home to see her mom receive the Ambassador of Hope award. Gabby is an impressive young woman. Side note: I feel sorry for Frank Jr. since he had to listen to his dad’s sex stories. Gross.

Teresa, Gia, Gabriella (my favorite kid of hers), Milania, and Audriana are hanging out in the kitchen. They call Joe Giudice to chat about his Rolls-Royce of massagers. Teresa shares that she got the house in the divorce but she paid off his debts. Who got the better deal here? Bravo, please tell me he is not getting a check for his FaceTime calls on camera.

Teresa shares how difficult it has been after losing Nono. He was suffering horribly and missed his wife so it was time for him to just let go. They were only able to have a small service for him due to COVID. Teresa feels like an orphan after losing both parents and that is really sad.

Dolores is having her celebratory party at David’s house. David comes home, and he apologizes that he couldn’t make it there when she got the award presented to her at home. He can’t stay for the party, but he will stay for just a few moments to prove he is a real person. Yep, David, we know to accept only the bare minimum from you.

Melissa arrives at the party and David is already leaving on his motorcycle. Jennifer can’t understand this relationship — neither can we. She doesn’t understand why they are having a party for her but her significant other can’t stay.

Jackie comes to the party and she is glad Teresa is not attending. She is relieved there will be no awkward interaction for now. Margaret arrives so the gang is all here. She mentions that she is still concerned over Jennifer face-planting on Teresa’s pool deck. Margaret still has PTSD over her mom’s drinking spells so she was triggered seeing that.

Jennifer shares that Bill had to carry her into the house. He put her in the shower and washed the throw-up out of her hair. Now that is a devoted husband, and he’s also a doctor, so it shows you can be attentive to your partner. Pay attention, David!

Melissa confronts Dolores about her living situation. Did she pull the short straw to ask that question? Dolores pretends like she wants it this way since she likes being independent. Melissa is right on if he had put a ring on it she would have moved in immediately. She hits the nail on the head that Dolores has coping mechanisms that help her deal with the men in her life who are basically emotionally unavailable.

Dolores will have to take her accolades from her charitable awards since she won’t be getting them from her personal relationships. She does have a gorgeous closet in David’s house full of beautiful “red carpet” clothes.

YIKES, in Marge’s ITM, her face is pooling around her mouth. I think by the end of the season it will be dipping down into her torso! Sorry, I digress…

Melissa asks Dolores about how many times a week she has sex with David. Dolores isn’t answering that question. She slyly evades the question by pretending she is Polly Purebread. Melissa then pivots according to production influence and shares that they are having a celebration of life for Papa Giacinto.

Jennifer and Bill are talking about the Evan rumor. Bill mentions that Joe B. shared he heard the rumor around town about Evan at guys’ night. He personally doesn’t think Evan cheated, but he is glad that Evan is coming to face it. Bill really is the most level-headed hubby on this show. Love Dr. Bill!

On the car ride to the shore with Frank Sr. driving, Teresa is reflecting on the end of her marriage. She spent many years with Joe and only wishes him the best. Teresa realizes that she needs a life of her own. Dolores agrees, and Jennifer thinks that she should have that for herself as well. She needs to recognize she deserves it too.

Teresa mentions that Jackie insulted her from the get-go. She mentioned the jail word and that triggered her. Teresa can sure hold a grudge when someone states the truth. She will be hearing that little “j” word later in the episode!

Jennifer tells Teresa and Dolores what Bill told her about Joe B. sharing the rumor. Teresa is glad that someone else is co-signing that rumor so that heat can be taken off her. Frank is disappointed that the guys are sharing their secrets from guys’ night. He thinks it is like a bomb now since Teresa got their super-secret intel from guys’ night.

They arrive at Dolores’ shore house, and it is on the water but not as nice as Melissa’s. Teresa reflects on staying here when she was a kid. Margaret and Jackie are staying at Melissa’s house so Jackie doesn’t have to sleep with one eye open. Joe Gorga has to carry Jackie’s super-heavy suitcase upstairs. What is so darn heavy in there? Did Jackie bring tactical gear to fight off Teresa?

Teresa gets a call from Chad the realtor, and she already has a showing of her monstrosity of a home. She gets emotional describing her girls’ reaction to selling the house. Teresa thinks it is time for a fresh start for the whole family. Me too.

Jennifer chats with her brother Michael in Turkey. Gabby, her sister, and her dad went to see baby John in Turkey. Jennifer worries that there will be drama since her mom didn’t want to go on the trip.

Dolores is having a party at her house and EVERYONE is invited. This should be interesting to see how Jackie and Teresa interact. Teresa makes her grand entrance wearing a Versace jumpsuit gifting everyone with $24k gold-plated vibrators? Margaret looks like she is giving hers a hand-job.

Teresa has to take the opportunity to suggest that Jackie might want to insert hers where the sun doesn’t shine. She won’t take the olive branch comment without retaliation. Teresa must not be aware that vibrators are not meant to be shoved up your a*s. You know she probably was up all night trying to figure out a way to get Jackie back.

Jackie doesn’t think the group text invitation could be classified as an olive branch. She is choosing to not engage with her. Jackie thinks Teresa has no remorse and just won’t go there with her.

Yum, that spread looks amazing. How long will it take for them to ruin this nice meal? Margaret asks Teresa about selling her house and the divorce being final. Teresa thinks everyone should take what they said about Joe being after her money and eat their words. Joe was a class act, huh? Production shows a glorious montage of his finest moments. Joe Gorga resents that she still defends her ex after he has come out publicly and bashed him. He is troubled that she didn’t stand up for him. Melissa tries to interject and Teresa tells her to shut up.

Margaret thinks that Teresa is the exorcist and is lashing out at everyone at the table. Who is the next victim, Marge? I will give you a hint: your loose-lipped hubby. Margaret talks about Teresa’s breakdowns and how she goes after everyone.

Teresa asks Margaret if she heard what Joe B. said at guys’ night. Jennifer is raising her hand, like, call on me, please! She shouts that Bill said it is true! Now Margaret and Jennifer are screaming shut up(s) at each other. Margaret is confronting Joe B. and he isn’t acknowledging that he said that. He frankly looks a little terrified of his wife. Margaret thinks he mixes up his words all of the time.

Jackie tells Teresa that she treats everyone like sh*t. Teresa questions everyone, and Margaret says, “You did tell someone to yank my ponytail.” Melissa recalls being called a stripper by Teresa. Teresa says that Jackie isn’t a confident person, and Jackie smugly asks, “Did you get that confidence in jail?” Frank Catania was right — there will be an explosion! Jackie went there, and I swear I could hear the ticking time bomb and see Teresa’s hair smoking!

Teresa calls Jackie a nasty b*tch and jumps up from the table. Watch out and hang on to that table full of delicious food. Now that would be a crime to waste all of this good food! We then get a to-be-continued.

We will have to wait and see what happens after this disastrous dinner! I hope everyone is having a good week so far! See you all next week for the continuation of the dinner from hell!

WHO WILL WIN THIS BATTLE: JACKIE OR TERESA? TELL US IN THE COMMENTS!