Home Real Housewives of Dallas News RHOD Recap: Brandi Confronts D’Andra For Talking To Press About Her Racism Scandal, Kameron Gets The Surprise Of A Lifetime And Tiffany Struggles With Mom Issues

RHOD Recap: Brandi Confronts D’Andra For Talking To Press About Her Racism Scandal, Kameron Gets The Surprise Of A Lifetime And Tiffany Struggles With Mom Issues 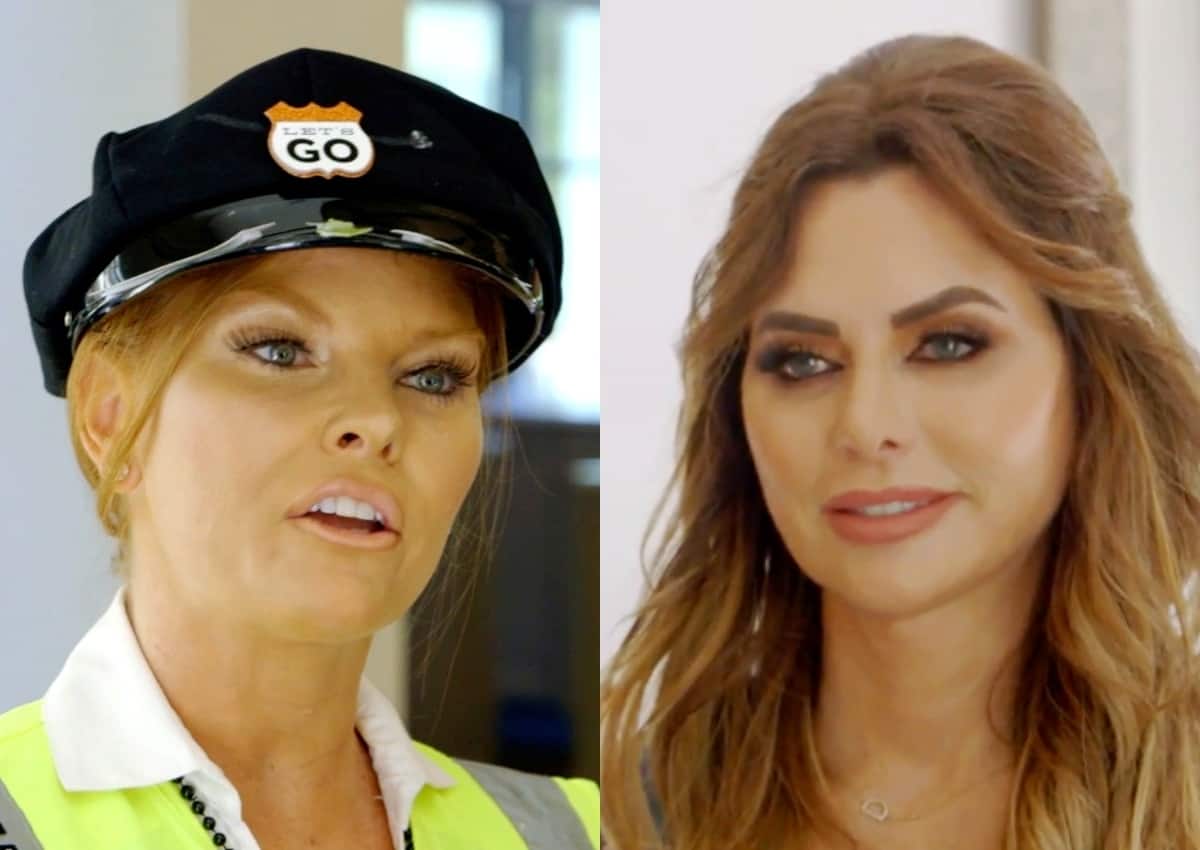 On this episode of The Real Housewives of Dallas, an upcoming trip forces all of the women to get in a good place with one another. A reminder of Brandi’s past and an unresolved beef with D’Andra is going to make for a rocky go…

Stephanie is taking the girls to Broken Bow, Oklahoma (her hometown!) and is planning quite the adventure. I mean, she’s even set up a Big Foot Hunter to take them out searching for the elusive beast. Stephanie asks the appropriate questions whilst on the phone with said hunter, like what should the women wear on such a hunt? Valid. Stephanie is CONVINCED that the women are “gonna become my Oklahomies and that is a life-long commitment.”

It’s Tiffany’s twins’ birthday and she gets to celebrate with them because of her new work schedule. Apparently, Tiffany’s six-year-olds have a GLAM SQUAD. I am confused about a lot of his, but I am mainly interested in why hair and makeup need to be involved AT ALL for a six-year-old birthday. Tiffany’s mom joins the crew for the tea party in their family hotel (what a life). Happy to see that Tiffany admits this party is mainly for her, although she managed to order some caviar for her kid since it’s her favorite. If only she treated her mother as nicely. What’s with all the mom bad-mouthing off-camera? Tiffany’s mother DOES seem like a very nice lady…I think Tiffany is just uber-sensitive about her…you know like teenagers are.

D’Andra FaceTimes Brandi and they set up a date to clear the air before the Oklahoma trip. Although they seemed pretty friendly toward each other on this phone call, they agree that things must get smoothed over in order to have the best time. I mean, calling someone a “cafeteria Christian” or essentially a devil worshipper shouldn’t be swept under the rug… The only problem is, they both think the other owes her an apology, so this should end well…

Over at Westcott Academy, Kameron is busy treating her son “survival skills,” like making a PB&J. Her husband, Court, steps outside to phone the realtor. He is holding back a secret: he has Kam’s dream house UNDER CONTRACT and she has NO idea. Surprise! Court suggests Kam go back and look at the dream house, but it’s hard to hide this surprise from Kam. Even Court refers to her as “the blonde detective.”  Kam is in the dark and worried about getting her hopes up with this house, but boy is she gonna be thrilled!

Mom of the year, Kary, schools her daughter on jello shots. Leave it to Olivia to make Kary look dumb, yet again. “I don’t think people your age really do jello shots.” Touché.  Olivia further makes *me* feel old because she just taught me a hip new phrase: “darty.” That’s slang for a daytime party… as the kids say.

D’Andra’s cooking just translates to a fire alarm going off over and over again. We get a glimpse at her never-ending, borderline gross flirting with her husband, Jeremy, but we also get the chance to see a softer side of D’Andra. Jeremy is her number one cheerleader, but D’Andra hopes to have her “friends” see the good sides of her, too.  The dinner ends with some sexy pool time, Jeremy’s words, not mine, but you know what’s not sexy? Wet. Jeans.

Court and Kam are off to make Kam’s dreams come true…but she doesn’t quite know it yet. Court explains, “A huge part of our relationship is messing with each other,” but it seems like the joke is on him when Kam begins to refuse the tour.  You see, Court lies and tells Kam the contract on their house is falling through, so, therefore, it may not be possible to get the dream house. Court is backpedaling his lies, trying to keep Kam calm enough to remain in the car for the entirety of the ride to the dream house.

When they finally get out front, Court has to practically DRAG Kam out of the Mercedes truck. He begins to cry as he explains his whole scheme and ends by letting Kam know that the 7.5 million dollar dream house is, actually, THEIRS! Kam basically kisses the top of his head (mainly because she towers over him) and bounds for the house.  Court promises no more secrets- now they are a team.

Of course, Tiffany makes a visit to Mama Dee’s. It is so apparent that Mama Dee loves Tiffany (almost more than she loves D’Andra) and it’s interesting to hear the two ladies chat about mommy issues. Tiffany shares her current work situation and her mother’s reaction and makes her own mother sound extremely cold.

Mama Dee feels as though Tiffany needs to solve her problems with her mom. Isn’t it ironic that she can give all this advice to Tiffany, yet has trouble with her own daughter? Tiffany claims she wants to have a relationship with her mother and Mama Dee cheers her on, especially when Tiffany shares her feelings of rejection.  It is apparent that Tiffany would bode well in therapy. While we are at it, sign Mama Dee and D’Andra up for that, too.

Right before heading out to meet D’Andra to smooth things over, Brandi chooses to skip the date. She feels betrayed by D’Andra. “This was not her place to openly talk about” Brandi’s racist videos, so when Brandi opens her email and sees that D’Andra was talking about her to the press, all her emotions that she buried in therapy get brought back up again. Brandi shoots D’Andra a text telling her she is “disgusted” by her actions regarding the “racist videos.” What I want to know is, why the quotes around the words racist videos in the text Brandi sent to D’Andra? Let’s call it what it is…

D’Andra, meanwhile, can’t understand how she became the bad guy. She reminds us that she only talked about the racist video to the press. She did not MAKE the video. D’Andra is sick and tired of the way Brandi twists all the drama to make her look like the victim. D’Andra is so p*ssed that she breaks the fourth wall and tells her crew that what is currently happening to her is not right.

Oh goodie! A girls’ trip kicking off with some unresolved drama. Stephanie’s house is the meeting place and Brandi enters in costume, of course, to be the RV driver. Absolutely ridiculous.  And yes.  An RV. Because let’s be serious, since they’re going to the country, they need a “country girl limousine.”

D’Andra is the last of the group to arrive, but Brandi wastes no time jumping all over her before anyone takes a step on that RV. Brandi brings it up in front of all the women and D’Andra attempts to explain herself by saying she was trying to have Brandi’s back.

Brandi lashes out and tells her, “You took that away from me, D’Andra. I became clickbait, once again.” Brandi believes that D’Andra mentioned her to promote herself. Huh? Brandi’s voice cracks and D’Andra apologizes (mainly to just shut up the crap Brandi is spitting out). Kary inserts herself in the midst of this fight and D’Andra lets them all know that she feels judged a lot in the group. Everyone calls her selfish and she feels like everyone is ganging up on her. Yes, D’Andra is a bit self-absorbed, but Brandi is, and WAS, in the wrong here… Brandi has to stop wishing that her racist comments could be buried because that’s never gonna happen. Kary yelling at D’Andra is not helping anything, either. I mean, doesn’t she realize that the longer she drags out this fight, the longer she has to wait to have those jello shots?!