Home Real Housewives of Dallas News RHOD Recap: D’Andra Reveals An Email From Her Stepmother, Kary Apologizes To Bigfoot Hunter, And Tiffany Confronts Her Mother About Her Feelings 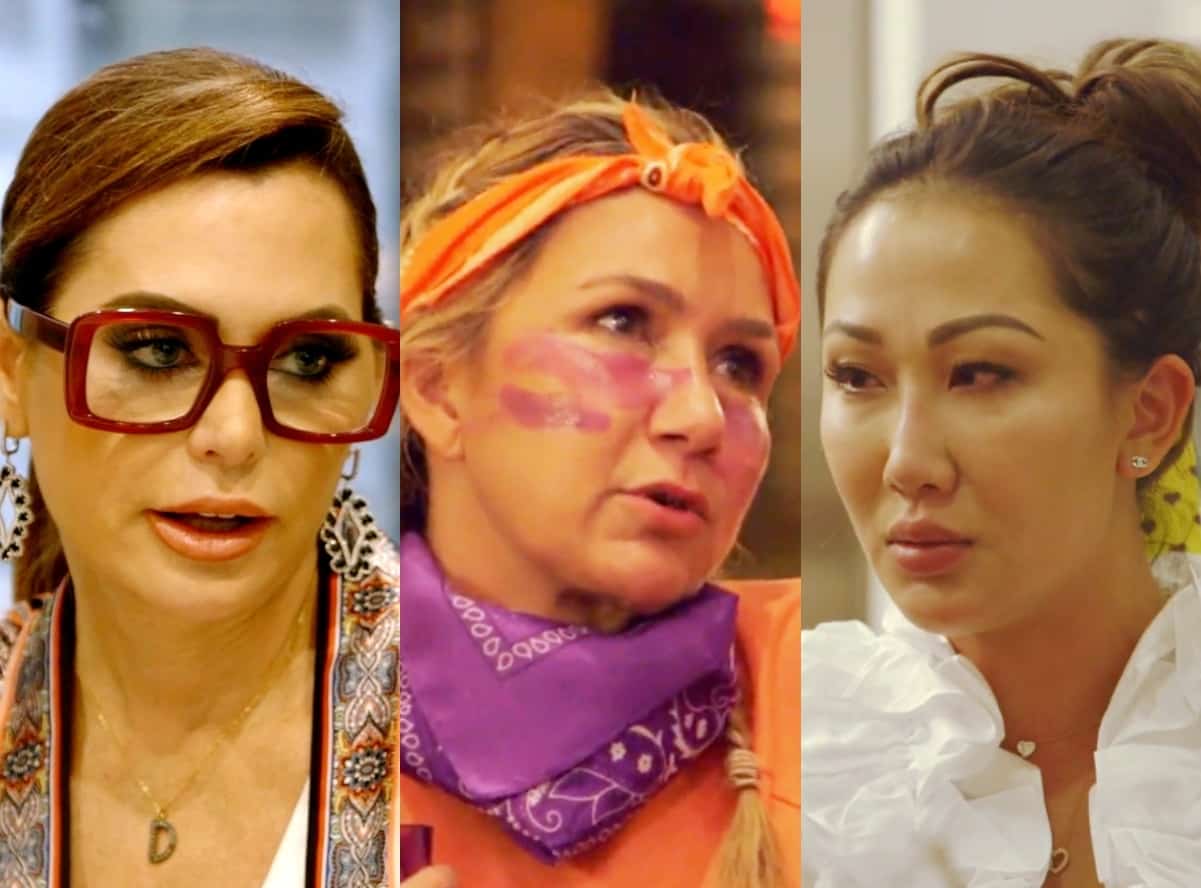 With Kary‘s apology accepted by Stephanie, it’s time for some fun on this episode of The Real Housewives of Dallas. A relay race + some pranks… what could possibly go wrong?

As Stephanie preps the ladies for the redneck relay race, Tiffany, playing it smart, asks, “Is redneck culturally appropriate or are we gonna offend someone?” Good point… Yet, Stephanie proudly states that she considers herself a redneck, so it should be cool for everyone else to say it, too.

After dividing up into two teams and receiving team bandanas, team Pink Posse and team Jim-Bob’s Babes are all ready to take on the games. Kameron stretches and preps to kick some a*s, but it’s all interrupted by Charles, the Big Foot Hunter. Stephanie has set up this reunion so Kary can be sure to apologize to poor Charles after her rude behavior toward him the night before. Miraculously, after a few excuses, Kary apologizes. Luckily, Charles accepts and apologizes to Kary (for what I am unclear). Looks like Charles and Kary are on a fast track to friendship now.

Charles gets roped in to serve as the referee for these games, and as Stephanie walks the women through them, it just seems more and more ridiculous. Swing your ding-a-ling? Plunger toilet paper game? Tug-of-war Oklahoma-style?  Stephanie claims these are all church camp games, but it really leaves me wondering about what kind of church she attended.

Surprisingly, all of the women really become competitive. Charles looks on (rather closely, if you ask me) as they swing balls and plunge TP rolls. In the midst of her excitement, Kam free-dives into the tug-of-war pit o’ shaving cream & whipped cream, slip n’ slide style. I actually LOLed at the gusto she exhibited. In the end, team Jim-Bob’s Babes wins the games and gets awarded with golden toilets. Good, clean, fun.

Post relay, it’s pig roast time (and Kary, Miss I-love-animals, is chowing down). As it pours during dinner, Brandi and Stephanie attempt to get Kam back for scaring them on the last trip. The ladies don their Big Foot suits and sneak up on the table. Interestingly enough, Kam doesn’t flinch and the prank is a total flop. But that’s not the end of the pranks for the trip… not even close.

Later that night, Tiffany has decided to play yet another prank on the ladies by dropping a fart bomb into Kary’s bedroom. Kary, being Kary, goes a step too far with her retaliation. She wastes a totally good jar of salsa by pouring it allllll over Kam and Tiffany’s beds. Last I checked, dumping salsa on a bed is not funny, and clearly, Kam thinks the way I do. Needless to say, Kam is p*ssed off. She has completely reached her limit because, as D’Andra puts it, Kary seems to lose all sense of boundaries after a night of drinking. Not okay.

At least Kary spent her entire night doing the laundry and cleaning up the mess she created. However, the rest of the house looks like a total disaster. Brandi, always screaming for attention, cleans and hops in the hot tub with her Big Foot costume on, and Kary (once again) apologizes for her “shanandeegans.” Although Kary knows how to push buttons, her one-liners are a hoot.

As Tiffany and D’Andra clean up the kitchen, they discuss mother-daughter bonds. Tiffany shares that her own mother is not affectionate, and D’Andra listens as Tiffany opens up to her. D’Andra understands where she is coming from as she is still trying to repair her relationship with Momma Dee. It’s time Tiffany brings up her issues with her mom TO her mom and not to everyone else.

SOMEHOW, this house looks sparkling clean, which is quite impressive considering the way these women abused it over the weekend. They all thank Stephanie for putting together the trip, board the RV, and head back home as new-found Oklahomies.

So wait, Kam got stung by a scorpion? It’s a good thing it wasn’t a poisonous one because then we would def not be able to meet Sandra, the animal communicator. Kam fears that her late dog Louis may not be able to “come with them” to the new house and Kam needs answers. Therefore, there are some weird things going on in the Westcott house because of their “blonde leader,” according to Court. Sandra promises that Louis will follow the fam to the dream house and Kam breathes a sigh of relief.

D’Andra and Jeremy talk about the girls’ trip, but then things take a turn. D’Andra explains she got an email from her stepmother and shares the contents of it with Jeremy. It doesn’t seem like a terrible email, and so Jeremy breaks it down for D’Andra before she breaks down. D’Andra doesn’t like the tone of the email and begins to discuss her family dynamic.

D’Andra’s father committed suicide a few days after she returned home from her honeymoon. His will was left in her childhood bedroom and this will cut D’Andra out of his inheritance completely.  It turns out that Momma Dee had a different will that trumped the newer will and everything wound up going to D’Andra. Man, we def need a separate spinoff explaining more of this family drama. D’Andra claims that growing up, her late father would pay no child support to Momma Dee so that his inheritance would go entirely to D’Andra upon his death. That was the deal. D’Andra explains she offered to split the inheritance with her step-brother, but her step-mother wanted all of it. Hence the court. Hence the bad blood. Now it’s all making much more sense why this stepmom is leery of D’Andra.

With only three more nights left in their house, Kam is running around like a chicken without a head trying to pack. Kam attempts to clean out Louis’ closet (which, BTW, probably costs more than my entire family’s wardrobe), and after hearing the animal communicator’s advice, Kam knows that things will turn out just fine for Fanci, Louis, and the whole family in the new place.

It’s Tiffany’s mom’s birthday, and because of COVID, the girls are making dumplings together at Tiffany’s house. Tiffany continues to beat herself up as a “sh*tty dumpling maker” and becomes baffled that her mother will not stay for dinner. Luckily, her mom does stay for a little while and Tiffany reminisces about her childhood.  Wow — hearing about Tiffany’s life (sleeping on the floor of the library) really puts into perspective just how hard her parents worked to try and give their children a better life.

Tiffany steers the conversation to missing out on a mother-daughter connection, but her mom gets defensive. She states they spent time together and plays down Tiffany’s “academic advancement” at such a young age. Tiffany wants her mom to say a certain something that she concocts in her own mind, but nothing her mom is saying is making things better for Tiffany. Tiffany cries about work and then it spirals into how she always feels like she’s letting her mother down. Her mom hugs her and even tells Tiffany all the things she has always wanted to hear: I love you. I am proud of you. And let’s set up some mother-daughter time. Life is short. Stay for the dumplings, mend the relationship.