Home Real Housewives of New Jersey News RHONJ Recap: Joe Gorga Calls Dolores a “Broken Woman” as She Storms Out of Michelle’s Party After Everyone Attacks Her Relationship With David

RHONJ Recap: Joe Gorga Calls Dolores a “Broken Woman” as She Storms Out of Michelle’s Party After Everyone Attacks Her Relationship With David 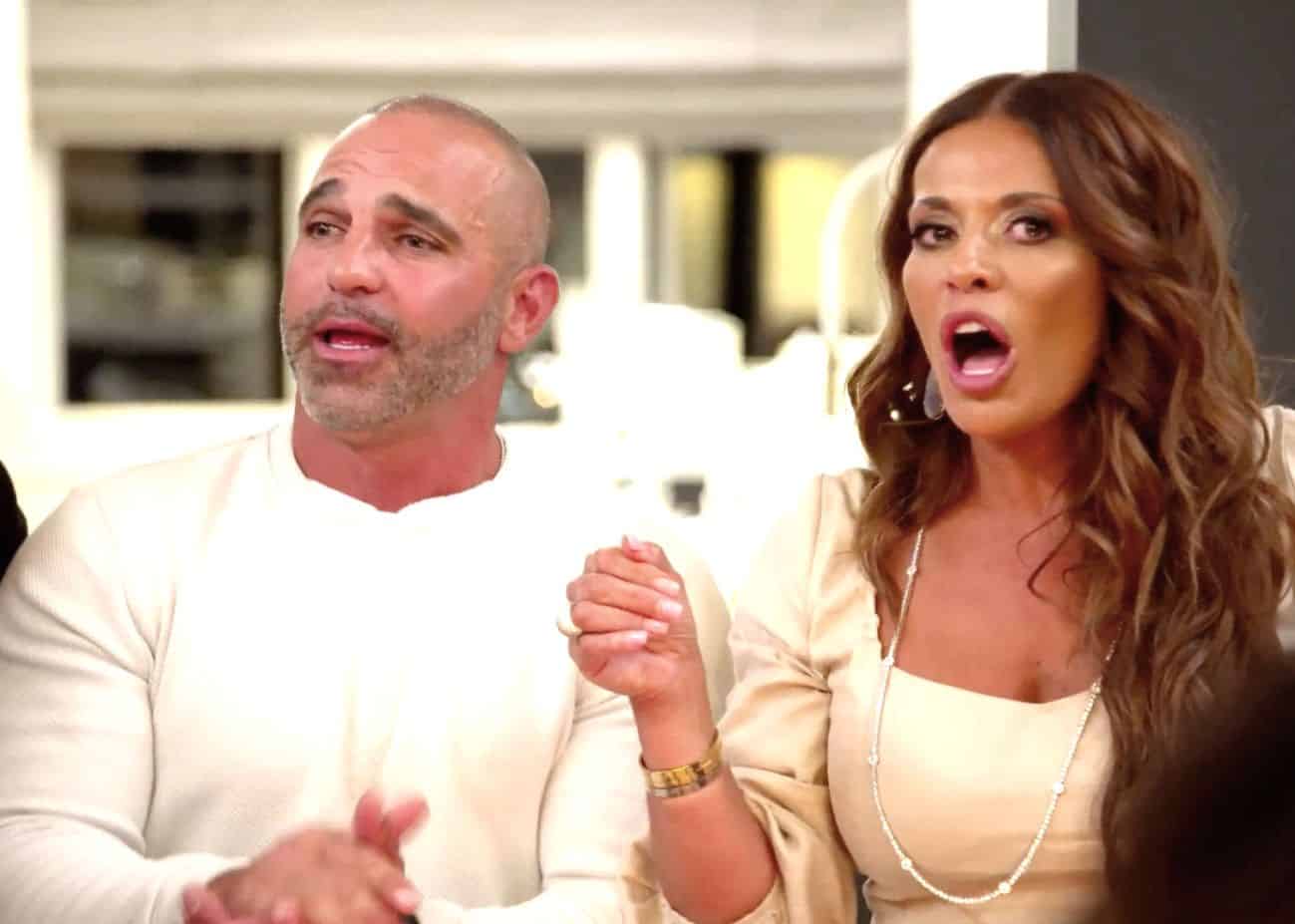 This week on The Real Housewives of New Jersey, we return to the Turkish tea party when Teresa left upset over her mom. We will also attend a cocktail party where Joe Gorga and Dolores get a little heated over David. Let’s spill the tea on this episode, shall we?

I must forewarn you that the episode is really slow-moving. Please be patient since the last five minutes are worth the watch.

We now re-join the ladies at the tea party after an upset Teresa left reminiscing about her mom. Dolores thinks that Teresa lost her mom too young and the loss is almost too painful to bear at times. I agree. You just don’t ever get over the loss of a mother.

Jennifer discusses how her mom used to commute two hours to see her family. She bought a home for her so she could be closer since Josephine used to fall asleep at the wheel!

Jackie asks Dolores about David’s house. Dolores, of course, still hasn’t moved in. Valerie is then asked whether or not she likes David. She says, “He is an amazing doctor.” READ BETWEEN THE LINES HERE! Valerie knows her daughter is in a one-sided relationship, but maybe she rationalizes that anyone is better than Frank Catania?

Dolores is in the hot seat when Jennifer asks her if she told her mom what the psychic said. She doesn’t like that the ladies love to dissect her relationship. Dolores doesn’t like Jennifer telling her mom what should come from her.

Dolores thinks since David basically gives her the bare minimum and doesn’t curse or cheat, that makes him a keeper. She claims that she is getting all that she needs. Dolores, you really need to up your standards here! She thinks the moms are being supportive and her friends aren’t being supportive. Dolores thinks you can’t fight the DNA and she will remain in an untraditional relationship just like her mom. How about trying to break the cycle?

I love when the moms talk about not living with their husbands and how it works for them. Josephine mentions she is unhappy, but she is relieved that they don’t live under the same roof. She is “old school” and is embarrassed they live separately. It was endearing when she noticed she was being ganged up on and said, “Why did all of the stories turn on to me?”

Frank, Evan, Joe B., and Joe G. go golfing at Valley Brook Golf Course since the girls are having their Turkish tea. This should be a good time since the guys tend to have more fun than the ladies. Bill isn’t able to join them, bummer. Joe G. gives Frank, aka the Guido, sh*t over wearing a polo so he can stylishly fit in on the golf course. He wants to have a golf challenge and everything involves a*s kissing or full-frontal nudity if you lose the bet. Joe G. likes to goose the other guys, especially Frank. He has an obsession with seeing sex parts. Frank loses so he has to plant his greasy lips on Joe’s a*s. YUCK, I can’t imagine having to kiss Joe G.’s a*s.

I find it amusing that the guys at lunch all commiserate over their aches and pains from golfing. Joe. B. is complaining about all of the renovation projects that Marge keeps giving him. Joe G. is whining about Melissa’s obsession with Envy. He gets grilled by the guys about Teresa’s guy. Joe shares that they are in love and Joe likes him for his sister. He must see some similarities between himself and Luis. Perhaps since they are both macho sex addicts?

Michelle shows Teresa a home to consider when she sells her current tacky monstrosity. Teresa wants a more modern home. She FaceTimes Gia to show her the basement apartment and Gia is all in for this option. Teresa admits her old home was too much to maintain. She thinks her marble gaudy palace needs to be sold to close that chapter of her life. The house price is $2.195 million, and Gia asks her mom, “What is your budget?” Gia, that is a very logical question. Thankfully someone in this family asks these very important questions.

Michelle is extending an invitation to Teresa for a cocktail party. She wants to introduce her to a guy named David. Teresa will meet him just to shut Michelle up about it. She doesn’t want everyone to know she has been banging Luis on the regular and has a fully stocked fridge of pineapple to prove it.

Melissa and Joe are meeting Margaret and Joe B. for lunch. She watches the video of her husband getting his a*s kissed by Frank. Melissa is correct that Joe is like the everlasting frat boy.

I am noticing Joe B. is like the bone collector. He is collecting the rumors and sharing them with everyone. Maybe he has Sheree from RHOA on speed dial for proper bone collector protocol? Melissa can’t believe that her husband shared the info on Teresa’s guy. She knows Teresa is going to blow a “casket” over this. Margaret surmises that Teresa is getting some serious action based upon all of the pineapple juice she has been drinking.

Dolores is scared of going to the doctor by herself for her biopsy results. She acts like she wants her life the way it is. Dolores purports that she is financially independent of Frank Catania? She thankfully got her results back and they were benign.

Dolores tells Frank about her biopsy results. Frank is relieved that she got good news. He is now worried about having too many cocktails with the little troublemaker Gorga at the party.

I find it amusing that both Jackie and Dolores are talking to their guys about Joe Gorga getting the guys wasted on shots. They both reflect on how they become blubbering idiots after spending time with Gorga. Evan claims this is nothing for him since he used to be a frat boy and his liver can take it.

Teresa and Gia chat about the potential guys at the cocktail party. She isn’t interested since she has already met someone and is in luv.

We now arrive at Michelle’s beautiful home for the cocktail party. She is wearing a dress that has serious side boob, and then there is serious boob spillage in the front as well. Michelle attributes it to postpartum, but I think maybe a bigger size dress might hold those milk jugs in better?

Margaret is wearing her bright red lipstick, which accentuates her trout mouth.  She actually looks like a madam and should be running a brothel. The video from the golf game keeps getting shown and it is so gross.

Margaret tells Teresa that “Joey” is telling everyone that she is in love. She isn’t happy her brother has been running his mouth. Teresa says, “Family is supposed to keep your mouth shut.” Joe tries to cover and says he didn’t say anything, but the guys aren’t letting him off that easy. He creepily changes the subject by telling Teresa she is stunningly beautiful. Joe and Teresa as brother and sister have a weird flirtation with each other and it is uncomfortable to watch.

Margaret loves to bring attention to the days when she used to bang Joe when they were married to others. She said Joe used to have to shower after they had sex so his wife wouldn’t smell her on him. I can’t even fathom how foul of a smell that had to be. Joe had to loofah that stench off of his body before going home.

Dr. Bill arrives and I am so happy to see him. Michelle has her friend Dave come to meet Teresa and she isn’t interested. Doesn’t he look like Carl from Summer House?

Dr. David bought Dolores a Porsche for her birthday. Everyone debates why the car came before the ring. David is dragging his feet and he WILL NEVER propose to her.

The awful video keeps playing on loop. Frank, with his greasy face, says, “He has eaten better a*s than Joe Gorga’s.” He is so vulgar, but I tend to agree that pig probably can make that claim. Sorry, I just threw up in my mouth.

Teresa is rapid texting with her guy. She acts like she has to go home for her girls. Teresa is leaving pantyless to have a booty call with her sex addict. Dolores is getting fired up when David is brought up and thinks this judgmental crowd needs to mind their business. Joe thinks that Dolores is settling for David. Dolores says she can walk away if she is unhappy just like she did when she was nine months pregnant.

Jennifer thinks Joe is right since Bill is a doctor too, but he makes her and their family a priority. Joe tells Frank that he broke Dolores. Jackie thinks this little monologue is really directed at Melissa. Dolores claims she is loved by David. Joe thinks she has a scarred heart. Margaret is getting annoyed that Joe insinuates that a woman needs a man and without them they break. Misogyny at its best!

Melissa makes an inquiry about the gift of a car instead of a ring. Dolores is fervently defending David and his expensive gifts. She is furious they are talking behind her back about the Porsche. Jackie acts like there was no transition between wanting a ring and accepting very expensive pity gifts. Dolores wants all of them to go f*ck themselves and she leaves. She orders her greasy ex Frank to the car and tells him not to talk in the car. Well, this episode was mundane but there is always hope for next week!

Next week, we meet Luis, and Dolores is still getting questioned about David. Jennifer and Josephine aren’t speaking since they had a disagreement. I will see you all next week, and take care!

WHAT DO YOU THINK ABOUT THE GIFT OF A CAR IN LIEU OF A RING? TELL US IN THE COMMENTS!