by Julia May 5, 2021 161 comments
ShareTweetWhatsappPinterestRedditTumblrMailFlipboard 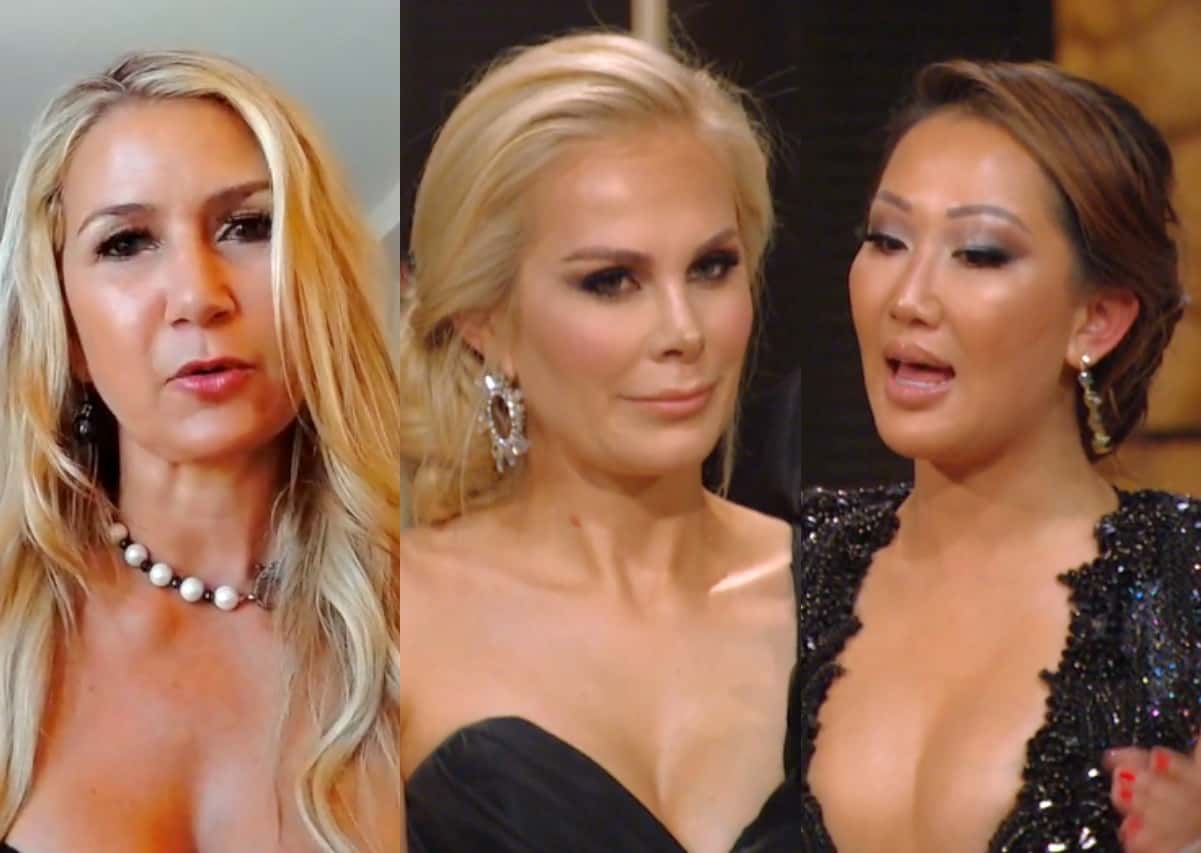 Based on this “special” timeslot for the Real Housewives of Dallas reunion, one can only wonder if this is a demotion… Dallas is, according to Ramona during WWHL, the least popular Housewives franchise. Nevertheless, the ladies of Texas brought it for this reunion — with the drama, and of course, the receipts (um, can we discuss Kameron‘s pink evidence box?!). And a shocker was also dropped when Kary announced her divorce.

During the RHOD reunion, Kary is taken to task over her behavior this season. She laughs through the jokes but states that although it looked like she was having lots of fun, she was struggling, and her marriage was falling apart. This shouldn’t come as a surprise to anyone, but Kary confirms that she is divorcing Eduardo.

She tells the world that she was trying to “mask” what she was going through and is embarrassed by her behavior. Kary did not want to admit how bad things were with her husband during filming, but she further states that despite the prenup, she still has to work and make her own money to support herself post-divorce. All the women offer their support to Kary and it seems pretty legit…

In fact, Kary took to her Instagram page just moments before the reunion aired last night to confirm her split from Eduardo, her husband of 12 years.

Back to the start of the RHOD reunion as Andy greets the women on set and then explains that Brandi and Kary are not attending the reunion in person. This is because Kary tested positive for COVID and Brandi sat next to her on the airplane. Kary is Zooming in, which is great cuz that means she won’t be able to ruin anything on the reunion set. Brandi is also joining in on Zoom, but that’s absolutely no excuse for her current “I Dream of Genie” look. Brandi explains that she has her baby with her at the hotel (ya know, the one she was pregnant with for the majority of the season), and she warns there may be some crying…

Something tells me that baby isn’t going to be the only person crying. I mean, Kam is essentially looking to fight with her Elle Woods pink briefcase full of evidence. Watching the season back, we are reminded that the ladies did have some fun despite all of their issues. Stephanie with the charcuterie board, Tiffany and her fear shart. Wow. There’s really no holding back here. We even find out that Tiffany actually went to the hospital after her birthday party courtesy of one too many tequila shots — homegirl just can’t hang!

The first topic to be covered is the crumbling friendship between D’Andra and Kary during most of the season. Kary gets put in the hot seat when Andy asks if she brought up her daughter’s mental health issues to shut down D’Andra. Kary explains, through tears, that she would never use her daughter as an excuse. D’Andra reminds Kary that a friendship goes both ways and Kary still denies she ever bullied D’Andra.

D’Andra brings up the famous “COVID girl” name-calling and she feels as though the group is “afraid” of Kary. That would explain why the rest of the group will not admit she is a bully — they don’t want to be Kary’s next victim. D’Andra is annoyed that no one stuck up for her throughout the season and points out that the other ladies finally confronted Kary only when it affected them. Currently, D’Andra and Kary are not speaking due to some social media jabs (and something that only Kary can share). D’Andra explodes on Stephanie when she gets blamed for egging the bullying storyline on through an Instagram post. She states, “I fight with my hands out… I’m not milk toast.”

Next up: reminding Kary of all the messed-up stuff she did this season. Regarding Charles, the Bigfoot hunter, Kary states that she was in a bad place (due to marital issues) and took her anger out on the poor guy. Regarding her pushing Tiffany (who cannot swim) into the pool, Kary claims she forgot that important tidbit of info… but she apologizes again. Regarding the binge drinking conversation Kary had with her daughters, Andy asks the other ladies if they believe Kary has a drinking problem. Stephanie and Kam brush that alcoholic topic off and Kary explains she has been drinking less and is focusing more on her future.

Andy switches gears and begins asking Kam about her (Barbie) dream house. Louis’ spirit is alive and well in the new house and she is so excited to begin the decorating process. Despite what some may think, Kam is with Court because he is her best friend, not because he has oodles of money (although I am sure that helps).

When Tiffany is asked if her first year of residency or her first year of the show was harder, she states that she cried more during Housewives. That’s probably cuz an Excel spreadsheet couldn’t help prepare her for all of these personalities! Andy finds out that many people called it career suicide when Tiffany joined the show, and Tiffany admits that she is “hypersensitive” to her mother and her behavior. This would explain why her mom didn’t seem all that bad to the viewers. Tiffany states that her dad has expressed some dissatisfaction with her doing the show. She also says her mother probably regrets coming on the show in the first place, especially because she has become such a negative part of her storyline.

Today, Tiffany says her relationship with her mom is still weird due to COVID, but not because of her Asian mother stereotype TikToks. Apparently, those TikToks “disturbed” Kam, and when she tries to butt in and call stereotyping racism, Tiffany claps back. “Explain to me how I’m being racist about my own race again, I didn’t quite catch that.” She tells Kam to unfollow her and stop watching. Boom.

Kary believes that she could have had a good friendship with Tiffany as they were both immigrants with mother issues. However, Tiffany feels as though the way she started off with Kary made it difficult. She did not appreciate being picked on, but she realizes now that Kary had good intentions. Tiffany has a hard time getting her point across because Kam keeps interrupting her. Something tells me that she is about to explode on Kam…

Ah, chicken feet gate. It’s been a minute since we were reminded of this drama and of Tiffany’s bossiness. Tiffany gets a bad rep for always correcting people, but she explains that her corrections always come from a good place. Kam then whips out printed tweets and asks if anyone on the set signed up for the “Tiffany Moon grammar class.” She is coming for Tiffany HARD and Tiffany’s face just reads ‘over it.’ Kameron demands to know why Tiffany posts about her intelligence on social media. Even Andy calls Tiffany out for being a little mean on a particular tweet…

For a girl who just wanted to fit in and make girlfriends, Tiffany sure is rocking the boat. Tiffany did not appreciate being hazed but doesn’t really answer the question if she stands by her use of the word ‘bully’ to describe Kary. Kary tries to defend herself and Kam calls Tiffany “three-faced.” Apparently, Tiffany is different every day according to Kam.

It is brought up that Kam is not an angel in this chicken feet social media battle. However, Kam apologizes for the post (the one where she said she would rather eat dog treats) and claims she did not post it… although it was on her account. Furthermore, Kam believes that Tiffany set her up with the chicken feet because she KNEW Kam was a picky eater. Wow. Tiffany does NOT accept Kam’s ownership/apology for her nasty post and threatens that they are not done hashing it out… New girl, what?!

TELL US — THOUGHTS ON THE REUNION OF RHOD?