by Elizabeth May 5, 2021 400 comments
ShareTweetWhatsappPinterestRedditTumblrMailFlipboard 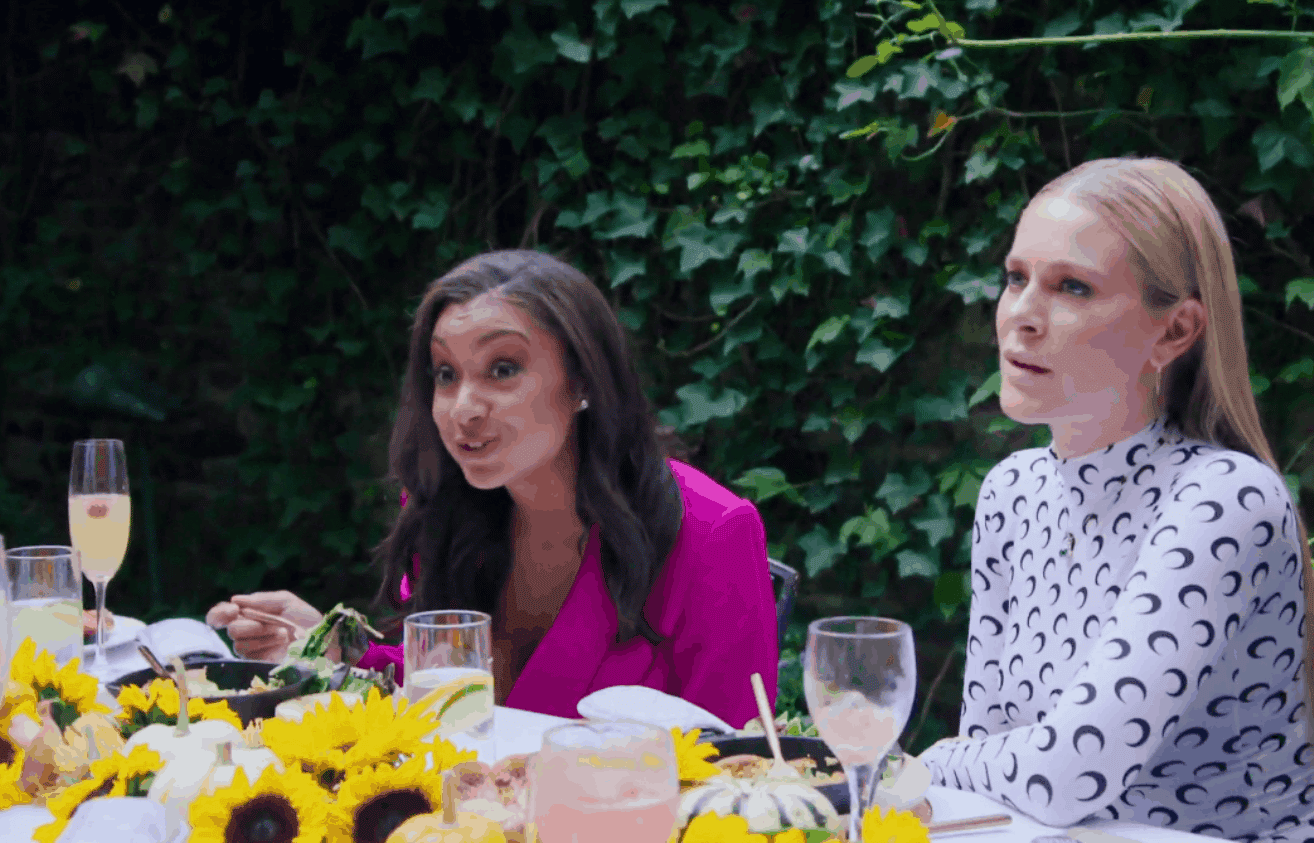 Welcome back to the Real Housewives of New York City for season 13! Let’s see how Eboni, our new cast member, meshes with this feisty group of New York ladies! I am excited to check in with this group!

We open with a glimpse of where things were on October 1, 2020, and the streets are virtually empty for once in NYC. Here is a quick recap of what the Housewives are up to. We first visit Leah and Martin at the gym. He is still her trainer advisor and can give out tough-love advice like a pro. Leah tells him she has a new nose, a new wardrobe, and a new apartment. She REALLY just saw herself on TV for a full year and thought those were the only things that needed to be changed about herself.

Ramona, Mario, and Avery were shacking up in Florida during the shutdown. Luann thinks the masks are a fashion faux pas and is ignoring the fact that they are lifesaving. Sonja is enjoying the cray vibe she gets when she is isolated — it’s basically just another day for her.

Leah has upgraded her apartment and adopted a new dog. She is planning on converting to Judaism, and we are still subjected to her cloying sister, Sarah, who is on the phone. Leah has felt very disconnected from God during the shutdown and NOW wants to be an Orthodox Jew. She will have to change a lot more than her attire but she claims to want a challenge.

Leah’s dad, Bryan, calls, and she is asking for his forgiveness. She mistakenly believes that Yom Kippur is a day of forgiveness. Leah, darling, it is a day of atonement. Bryan thinks she needs to do penance before there is forgiveness. She really is the one that isn’t taking this seriously since she doesn’t even know what the holiday signifies. I can’t believe production allowed this bullsh*t storyline to progress and didn’t at least vet it.

Ramona is on her way to visit Luann’s new digs and she is beating the ear of her poor dog. Luann’s new place looks good and she unloaded her other home. She is not drinking and looks really fabulous. Luann is one of those people that manages to look good even when she has really partied hard in her life. She also hasn’t messed with her face and body like the rest of them.

Luann thinks she has had an allergic reaction to alcohol and doesn’t remember how she got home — more than once?! Not good, Lu. I can’t believe Luann bought a place near Tom’s apartment — actually, yes I can. That was probably a planned purchase and that is something that hasn’t changed. It is still all about Tom and she can now determine when he is headed to the Regency.

Luann thinks Sonja has gone MIA. She ran into her daughter and she said her mom doesn’t have time for her. Sonja has always claimed to be a hands-on mom. I wonder what is going on with her this time?

Leah meets her “friend” Eboni in the park. She met Eboni through mutual friends really recently. So this is how she is going to be introduced to the group when they really just met each other?  Bravo, whatever happened to organic relationships? Leah calls Eboni “Black Girl Magic.” She has respect for her since she even took on the president and she is an AKA (a member of the Alpha Kappa Alpha Sorority — the first historically African American sorority).

Leah tells Eboni she is still dating “Pita Chip.” She likes her f*ck boy. Leah acts like she isn’t pressed but she does want to fall into bed with anyone she fancies in love.

Leah and Eboni discuss dating someone new and restroom etiquette. She is worried about having to go number two when he is around. Leah broke up with a guy since he farted around her. Eboni is like, “I just ate,” so a person has to do what they have to do.

Sonja is back at the townhome since she hasn’t sold it yet, and she is “schooling” her new intern, Zoe. She is wearing her pajamas since all of her clothes are still in storage. Sonja is showing Zoe where to find her “deforesting pu*sy clipper” and how to run her bubble bath to wash off all the biological scourge she has collected during the day. She thinks her program is rather magical. Yeah, it is magical that she convinces these poor kids that she is actually giving them work experience. Sonja calls Leah, who is also in the tub, to invite her to brunch. Leah wants to bring her new BFF Eboni too.

We visit Eboni in her apartment, and we get to meet her sister, Natalie. Eboni is a lawyer, a broadcaster, and the host of a show called Revolt Black News. She also just started hosting a new podcast, of course, since that is the side gig for all of these Housewives.

Eboni shares that she tried to buy a new home and she got a rude awakening when she got her FICO score. She made some very irresponsible decisions with her spending and messed up her finances. Eboni even had her car repossessed. Wow, I didn’t know she used to be a public defender? I give mad props to anyone who works in that field since I know firsthand how tough it is. Eboni has got the mortgage situation settled and her score is now $Excellent$. She will be purchasing a one-bedroom place, so good for her.

Sonja is cleaning up her algae-covered outdoor patio wearing an outfit with a tag. She does this just in case she decides not to keep it. Who is surprised she does that?

Leah in her ugly pink vinyl-looking jacket literally has nothing on that remotely matches. She and Eboni ride together in the car. Leah just hopes that this raucous group will behave themselves. Eboni has rubbed elbows with Luann at charity events so she knows her. Leah is already insinuating that this group isn’t used to socializing with Black women. She is already stirring the pot. That sure didn’t take long. Eboni only cares that the food is tasty. Hopefully, Sonja ordered in so she won’t have to be subjected to food cooked in her toaster oven.

Eboni sees Sonja’s outdoor area as an enchanted garden covered in algae, but she is being too kind. I did catch her wrinkled tablecloth, and the pond looks like it is a bug-infested hole. Eboni notices that Sonja was trying to be inclusive by showing her biracial fish in her pond. She acknowledges that she is trying to connect showing her fish and proving she is racially inclusive.

Eboni tells Sonja that she needs to check the books on her 54% partnership. She advises her — since you know she is a LAWYER — that you need to protect your interests. Eboni has no idea who she is dealing with. Sonja has more startups than anyone, and they have produced basically no revenues so those books are a blank ledger.

Eboni admits she was on the Oprah track, but she now has decided that she missed out on babies. She made a choice and has sacrificed her life. Eboni was planning a wedding and it has been called off since he doesn’t want kids since he already has them. Sonja shares that she had her daughter with a much older man basically by trapping the old very rich guy.

Ramona and Luann arrive, and you know it won’t take long for Ramona to stick her foot in her mouth. Luann shares that she is dating a 6’6″ personal trainer named Garth who is blond and blue-eyed. She actually met him on a dating app. Ramona gets called out since she doesn’t even remember her guys’ names. UGH, do we have to hear about pervy Harry Dubin? He is like herpes — you can’t get rid of him.

Eboni mentions her new guy, who is a minority owner of a football team. She shares that he has three older kids. Sonja predicts that she will get pregnant right away with this guy. She tells her to go off birth control like she did. Eboni isn’t interested in trapping a guy. She advises Leah to shoot for the owner, not the players.

Luann and Leah chat alone about the fact that she needs a sober wingman. She really needs to get a legit sponsor instead of relying on this hot mess for guidance. We then get to see a glorious montage of all the bad behavior when this group drinks.

Sonja defends where she has been lately since they thought she has been MIA. She claims she was aimlessly wandering around the desert. You know, I could see her doing that. Sonja admits the Century 21 deal has really shaken her up. She is dealing with a lot and hasn’t unloaded her moldy townhome. Ramona tries to tell Eboni that she felt an immediate bond with her. She wants her to join them in the Hamptons. Leah doesn’t want Eboni to get stung by the Singer Stinger. Ramona always pulls the newbies in close at first and then basically pretends that they don’t exist. Remember Elyse?

Eboni mentions how Sag Harbor is special to her. She likes that it was one of the first places that allowed Black people to own homes there. We then get to see a fast forward where things don’t go too smoothly in Sag Harbor. Heather is also there so this must be the beginning of the end…

Next week, we get to learn more about Eboni, and Ramona puts her foot in her mouth with her “help” comment. Garth, who is Lu’s guy, makes an appearance. I hope you are all having a spectacular week!

What do you all think about the addition of Eboni? Is she a good fit for this group?