Home Recaps RHONJ Recap: Dolores Confronts the Ladies for Talking About Her Relationship With David, and Teresa’s Boyfriend Luis Makes His Debut

by Elizabeth May 6, 2021 130 comments
ShareTweetWhatsappPinterestRedditTumblrMailFlipboard 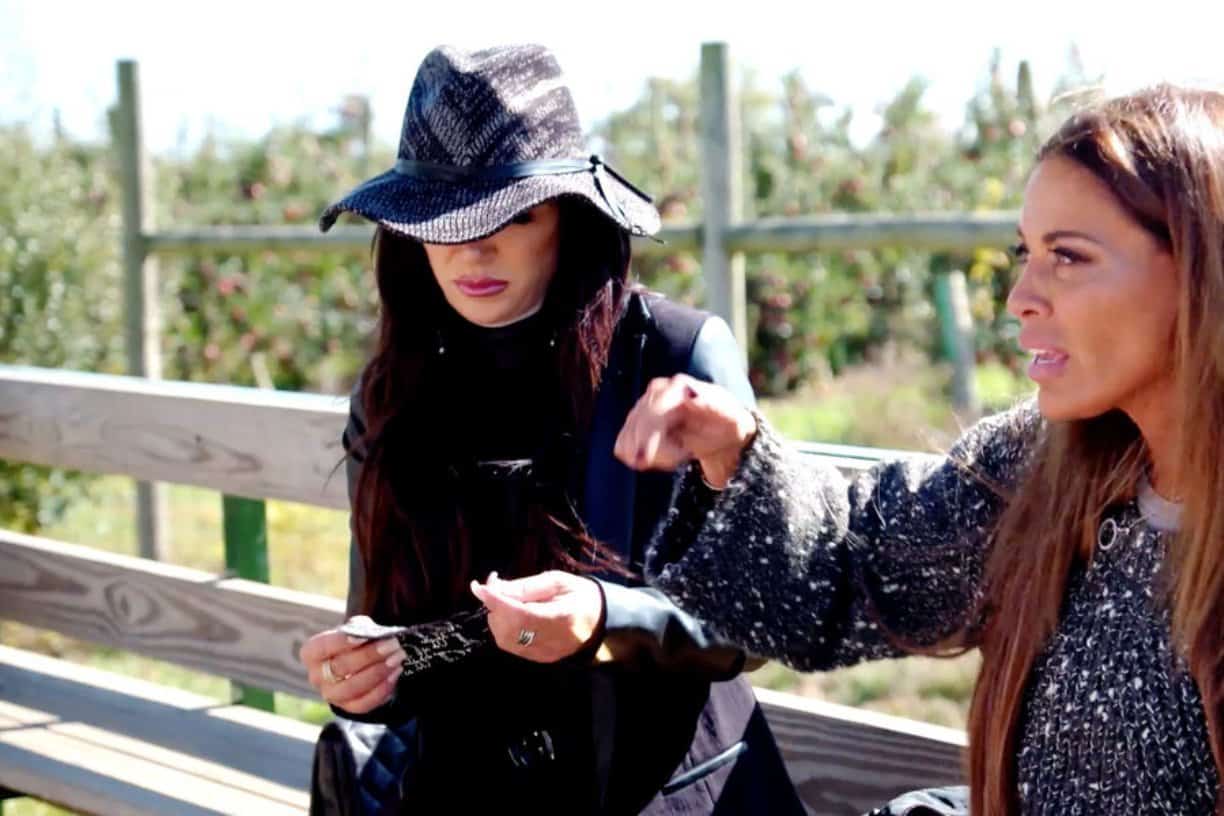 This week on The Real Housewives of New Jersey, will we meet the ever-elusive Louie? Can Dolores forgive Joe for trashing her relationship with her imaginary boyfriend David? Let’s check in with our Jersey wives and see what kind of trouble they can stir up this week, shall we?

This episode is called “Teresa’s Mystery Lover” and last week it was “Teresa In Love.” Well, all you get this week is a tease and everyone pontificating about him. We get a glimpse of Louie carrying flowers in the last second of the show to her front door. Bravo is milking this crap to the very end. They might as well call this franchise Teresa and the Other Real Housewives of New Jersey. Okay, let’s get started!

Jackie is having a birthday celebration at an apple orchard. She is giving Evan instructions on what needs to be done with the kids and their virtual schooling. Really, Jackie wants him to stay away from the gym and be hyperfocused on a full schedule with their kids. Dolores calls Jackie and lets her know that she has a doctor’s appointment and will be late for the apple picking. Jackie is concerned that Dolores might be hurt over the party at Michelle’s house.

Jennifer is getting new furniture to fill up her massive house. She hired an interior decorator to change it from Bill’s style. Jennifer hated their previous style with ornate fixtures and thrones on steroids. She tells her dad, John, that she is going to invite her mom over. John basically just shrugs and just seems to not be interested in anything involving his wife. Very sad.

Jennifer then calls Josephine to invite her over. Josephine is furious and starts speaking in Turkish and you know then it is really troublesome. When a parent starts speaking in their native tongue you are in BIG trouble! Josephine is irate that they were talking about her relationship and basically made a fool of her. She is embarrassed that her personal living situation was discussed at the tea party and she is done. John tells Jennifer to ignore it and that is probably why Josephine didn’t feel happy in their relationship. He ignored her discontent and chose to do nothing about it. Sad, very sad.

Teresa and Milania are chatting in the kitchen. She is growing up from that incorrigible little girl. Joe comes over to organize the garage and basically have a manufactured conversation. He thinks she needs a man in her house to help her with this manual labor. Teresa confronts Joe about oversharing about her guy. She gets all giggly when Joe talks about how he loves seeing her so happy around him.

Teresa admits he is the most amazing guy she ever met. She says he is smart. Hmm, I don’t know if she is qualified to determine intelligence. We are all well aware that she is severely challenged in the grammar department. Joe wants her to have someone better than that meatball Joe Giudice.

Margaret is having the cover of her book shot at her house. She put Joe B. to work to get her house in order. Joe claims he put eight years of work into that house? Marge Sr. is going to be photographed for the book as well. Margaret is wearing a green silky plunging gown with binder clips on the back of it. She and Marge Sr. will be shooting a photo for the back of the book. Margaret has way too much makeup on and she really needs to watch it since the face is sliding down as we speak. She needs to be wearing boulder holders to keep those boobs from tumbling down, and she needs to keep her bright red pout from ending up on her chin when her face melts.

Dolores and Frank are having a joint birthday party for Gabby and Frank Jr. Their birthdays are a week apart. Frank comments on their kids and how successful they are. He is right — they are both good kids despite big Frank’s influence. David shows up, which is a shocker! It is pretty sad that the kids aren’t sure who David is actually dating.

Dolores tells them she lost her sh*t at the party over the Porsche vs. Ring debate. David could care less about what her friends think about their relationship. Dolores claims David shows up when it matters to her. I don’t recall him being there for her when she had her cancer scare? Sorry, I digress. I love when Dolores said she has a beautiful monogamous relationship. Gabby chimes in with, “That is a foreign concept to her, Dad!” BOOM, love it, call that aging player out.

Margaret — with her tight leather pants that look like pork casing — and Melissa arrive at Jackie’s house. They are meeting for breakfast before their road trip. Margaret discusses how Joe spoke to Dolores at the party and found his behavior chauvinistic. Dolores told Margaret that the fact that they took a poll was a scumbag move. She loves that word, remember Danielle? Melissa tells Marge and Jackie that Teresa is dating her future husband. Jennifer arrives and looks fabulous wearing a cute hat for their day trip. The ladies give Jackie earrings for her birthday.

Jennifer tells the ladies that Josephine felt ambushed at the party. She shares that they are presently not talking. Melissa gets a text from Gino that Joe fell on the floor. She calls Joe and finds out he must go to the hospital. Melissa has to leave since Joe thinks he has a kidney stone and is in excruciating pain.

Margaret finds it ironic that David might need to save the day by treating Joe Gorga. Joe was just slamming him. Margaret also spills that Melissa told her that Teresa is gaga over this guy. Teresa is reluctant to admit this to the ladies. She admits he is amazing, but she wants to take her time before he meets this crew. Dolores makes it to the Warwick Valley orchard winery just in time. The winery guide describes the orchard as the “Disney World of Alcohol.” Yes, please!

Dolores thinks Joe is going through something. She thinks Melissa should have told him to shut his very little mouth. Teresa acknowledges that he has been going through a lot. Dolores lets the ladies know in no certain terms that she is miffed that they took a poll. The ladies are now picking apples and the orchard looks really pretty. Margaret probably won’t be able to partake in eating the apples since they might cause her to lose her veneered chompers. Dolores asks Margaret how the other ladies would feel if their relationships were being voted upon. She feels they are not respecting her choices and essentially judging her. Dolores thinks that friends shouldn’t do that.

The ladies head to the luncheon where they will be doing the wine tasting. They order truffle fries, YUM. Teresa mentions that she heard Joe definitely had a kidney stone. Margaret announces that she is having a birthday/Halloween party for Joe’s 65th birthday. Jennifer asks, “Is David going to grace us with his presence?” She thinks he should appear at least once since he literally has been ghosting Dolores all season.

Dolores loses it and resents her friends questioning her relationship. Jennifer wants Dolores to pick a lane with David. Dolores likes the commitment that she has now. I am not buying it that this is all she wants. Dolores probably loves getting expensive gifts, but she is a traditional girl at heart. Margaret wants Teresa to bring her new guy to the party, so that is when this shady dude is going to appear?

Joe got treated by David at the hospital. David took good care of him in the hospital despite Joe bashing him. Melissa tells Joe that Margaret thinks he is chauvinistic. Joe takes offense to Melissa not defending him. He wants the old Melissa back. Joe puts her on a pedestal, and he has given her everything she wants. He thinks she is not fulfilling her end of the deal they made when they got married. Melissa thinks Joe is trying to hold her back. Joe tells her to go do her own thing, but you can tell he isn’t being sincere about it. He stomps out of the room to go pout. That didn’t go well.

Teresa is getting ready to go on a date with Louie. She wears a top that pretty much leaves nothing to the imagination. In her ITM, Teresa shares that they talk all night long. Can you imagine the gibberish that comes out of her mouth? Milania thinks her mom is pretty smitten over him. She has really grown up from the little tomboy days. Louie arrives with flowers in hand to pick her up and we have a to-be-continued…

Next week, we must have the Halloween party and Louie finally materializes — I think. Side note: I have to mention the transition into WWHL as we get the guys’ taglines, which was actually pretty funny. I usually don’t watch that show, unless I am interested in the guests, but this was well done.

DO YOU THINK DOLORES SHOULD BE ANGRY OVER THE POLL?

TELL US IN THE COMMENTS!