Home Real Housewives of Dallas News RHOD Reunion Recap 2: Kameron and Tiffany Clash and D’Andra Sets the Record Straight About Her Last Name, Plus Brandi Shares if She Will Stay With Bryan After Cheating Scandal

RHOD Reunion Recap 2: Kameron and Tiffany Clash and D’Andra Sets the Record Straight About Her Last Name, Plus Brandi Shares if She Will Stay With Bryan After Cheating Scandal

by Julia May 12, 2021 171 comments
ShareTweetWhatsappPinterestRedditTumblrMailFlipboard 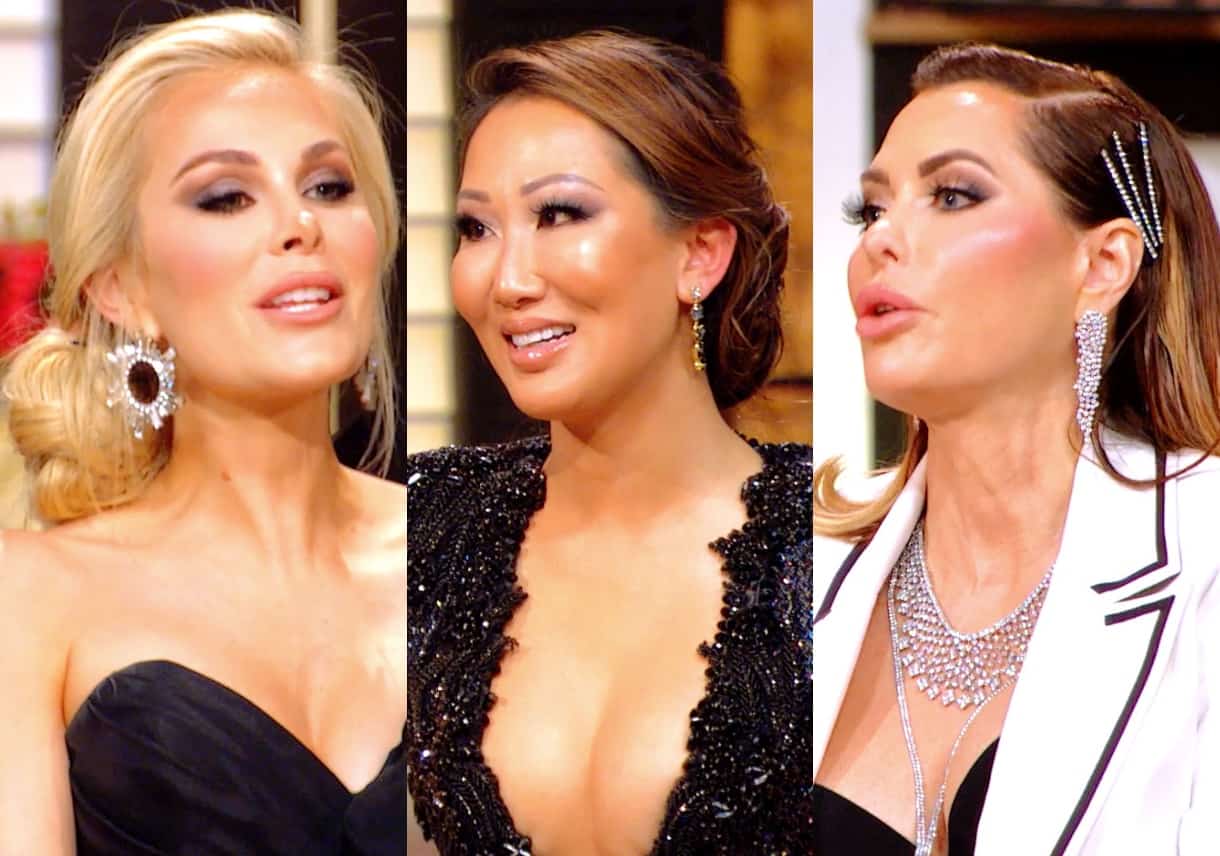 On part two of the Real Housewives of Dallas reunion, there’s no holding back. Tiffany makes it clear that although she was the new girl this season, she isn’t going to get pushed around, and the women finally understand that maybe a little support could have gone a long way…

Kameron is still coming in hot with the receipts. She’s got an answer to everything Tiffany says and isn’t afraid to sift through her pink evidence box to prove her case. While Kam tries to make Tiffany out as the bad guy, Tiffany reminds us that Kam’s Sparkle Dog Treat Tweet was very offensive. Kameron believes this feud is personal and Tiffany calls her “privileged and ignorant.”

LOL at Tiffany’s merch. Girl has to be careful calling Kam out for attempting to promote her dog treats while feuding with Tiffany when she’s walking around pushing tees that say “taste like chicken.” Kam gets accused of “whitesplaining” and of explaining Tiffany’s own culture to Tiffany. And let me tell you, Tiffany does not appreciate it…

Kam is being pretty hard-headed as she continues to attempt to defend herself, and she goes as far as throwing Stephanie under the chicken feet bus, too. As if rehashing chicken feet gate was not enough, the infamous cricket pizza gets thrown in the mix. Listen, I understand Tiffany was trying to pull a prank on her new friend group (albeit a lousy prank), but she is certainly not a criminal, Kam. Kameron goes ahead and quotes a law that Tiffany broke by hiding the crickets in her guests’ food, and when Tiffany calls her “lawyer Barbie,” there are shots fired.

Brandi blames being in her first trimester for her barf reaction to the cricket pizza prank. Remember — she didn’t know she was pregnant (gasp!). Also, cracking up at Brandi trying to defend Tiffany — someone is trying to remain on everyone’s good side.

Loving that D’Andra steps up and essentially tells Kam to start remembering stuff and stop whipping out receipts. Tiffany gets reminded (through a printed text message exchange) that Kam actually did attempt to play nice with her, but Kam states that Tiffany’s cyberbullying as of late has really put a bad taste in her mouth. Despite all of the drama, Tiffany is optimistic about moving forward, yet Kam can’t quite stop talking about the past. Tiffany calls for a reset, Kam embraces her, and I am pretty sure they just broke quite a few COVID restrictions with that half-a*sed hug.

We are treated with a light segment — apparently, Tiffany Moon’s grammar classes did nothing for these women. A “typhoon shot,” “nine commandments,” and come again with those seven natural wonders of the world??? Kam should have def practiced her pronunciation of dim sum, especially after just making up with Tiffany…

D’Andra does a damn good job of singing her shaman blues on set. Clearly, her shaman/hairdresser has impacted more than just her extensions. Brandi gets called out for being a hypocrite… how can a shaman be against her Christianity yet she can see ghosts? Brandi clearly picks and chooses situations where she can be a good Christian, and to that, Kam suggests Brandi be a “buffet Christian” over a “cafeteria Christian.”

Andy Cohen reviews D’Andra’s past and allows her to retell her parental story. D’Andra becomes emotional talking about Glenn Simmons and why she ultimately chose to change her last name to his. D’Andra claims it was not an opportunistic thing (yea riiiiight), but Mama Dee told a different story. Kam jumps in and debunks the rumors that D’Andra changed her name to get further in life. Sure wish she had a receipt to prove this.

D’Andra further states she never received any child support from her biological father and the deal was that upon his death, she would be awarded his (incredibly large) estate. D’Andra now owns three-fourths of her father’s inheritance and her brother has one-fourth of it. Makes you wonder why she was upset about having NO money last season, huh?

D’Andra beats herself up over calling her mom a b*tch on camera… probably because she is afraid of getting cut off. Despite the nasty words she used while at Tiffany’s party, Mama Dee has forgiven her. Ka-ching!

Brandi’s new baby girl makes her debut through the video call, and Andy probes to know the timeline of her pregnancy during filming. Brandi states that, years ago, she was told she was pre-menopausal, and that would explain her shock upon hearing she was out of her first trimester during her annual gynecological visit. Luckily, the baby is in great health, despite all of the boozing Brandi did during the season.

On top of her unexpected pregnancy, Brandi tells about her mother-in-law’s tragic death. She explains that her daughter was in the car with her mother-in-law when she died after a terrible car accident. It is painful to hear and absolutely upsetting to think about what that family must’ve gone through.

Andy changes gears from the tragedy to the cheating… not an exceptionally smooth transition, but he is getting the 411 on the stuff we all are dying to know. He wants answers about Bryan’s alleged cheating and the video that has recently leaked. Brandi tearfully states how disappointed she is in her husband, but despite any of the hardships, she plans on staying with him. Brandi is doing her best to protect her children and explains that a fan sent the cheating video to her daughter’s Instagram.

Stephanie‘s tears are flowing and she lets Andy know that there was one point she feared Brandi was going to hurt herself. Brandi insinuates that LeeAnne Locken leaked the video, and Stephanie explains how intentional the timing of the video leak was. Even Kam (who is LeeAnne’s friend) could not deny or confirm LeeAnne was the mastermind behind it.

Regarding the Asian eye video Brandi made, Brandi states that if she was actually on set for the reunion, she would have pulled a chair out for herself to be held accountable, much like she did to LeeAnne at the previous reunion. Tiffany reiterates that she has never thought Brandi was a racist and states that she doesn’t know how many more times she has to say it.

Brandi feels as if she went above and beyond to be a good friend to Tiffany this season, but Tiffany disagrees. She does not believe Brandi was incredibly welcoming. She also did not appreciate how Brandi claimed she couldn’t be herself in front of Tiffany. Translation: She couldn’t trust herself not to say something potentially offensive. That sounds like a Brandi problem… Tiffany claps back and reminds Brandi that she was being veryyyyy comfortable with Tiffany all season long (hello, well-endowed blow-up dolls and farts).

Kary apologizes for not sticking up for Tiffany as she was the “victim” last season, and she understands how Tiffany must have felt. D’Andra explains that all of the women “missed a huge opportunity to learn” and they have “let her down.” Brandi gives a canned response about grace and empathy, but it’s definitely eye-roll-worthy. Tiffany was not brought on the show to teach the women how to behave…

Kary wishes she took a closer look at her own personal issues and communicated more.

Brandi wishes she did not go into JR’s property, but man, did she wish she took a pregnancy test!

D’Andra cries over speaking to her mother the way that she did and wishes she would have helped Tiffany more throughout the season.

Stephanie wishes she never made fun of Tiffany’s closet and also wishes she supported Tiffany more.

Tiffany becomes emotional again as she explains she felt alone a lot of the season. She wishes she could take back the crickets and the trying so hard to be fast friends with the girls. She also wishes she could have forged relationships with the women earlier on. The poor girl becomes so upset that she gets a nosebleed! Well, that’s a reunion first!

Finally, Kam wishes she never offended Tiffany (and fake cries), and she wishes she tried to understand Tiffany better (whatever that means).

Seems like all of these ladies desperately do not want to be canceled… Cheers to pickle shots!

TELL US — THOUGHTS ON THE REUNION OF RHOD?