by Elizabeth May 13, 2021 280 comments
ShareTweetWhatsappPinterestRedditTumblrMailFlipboard 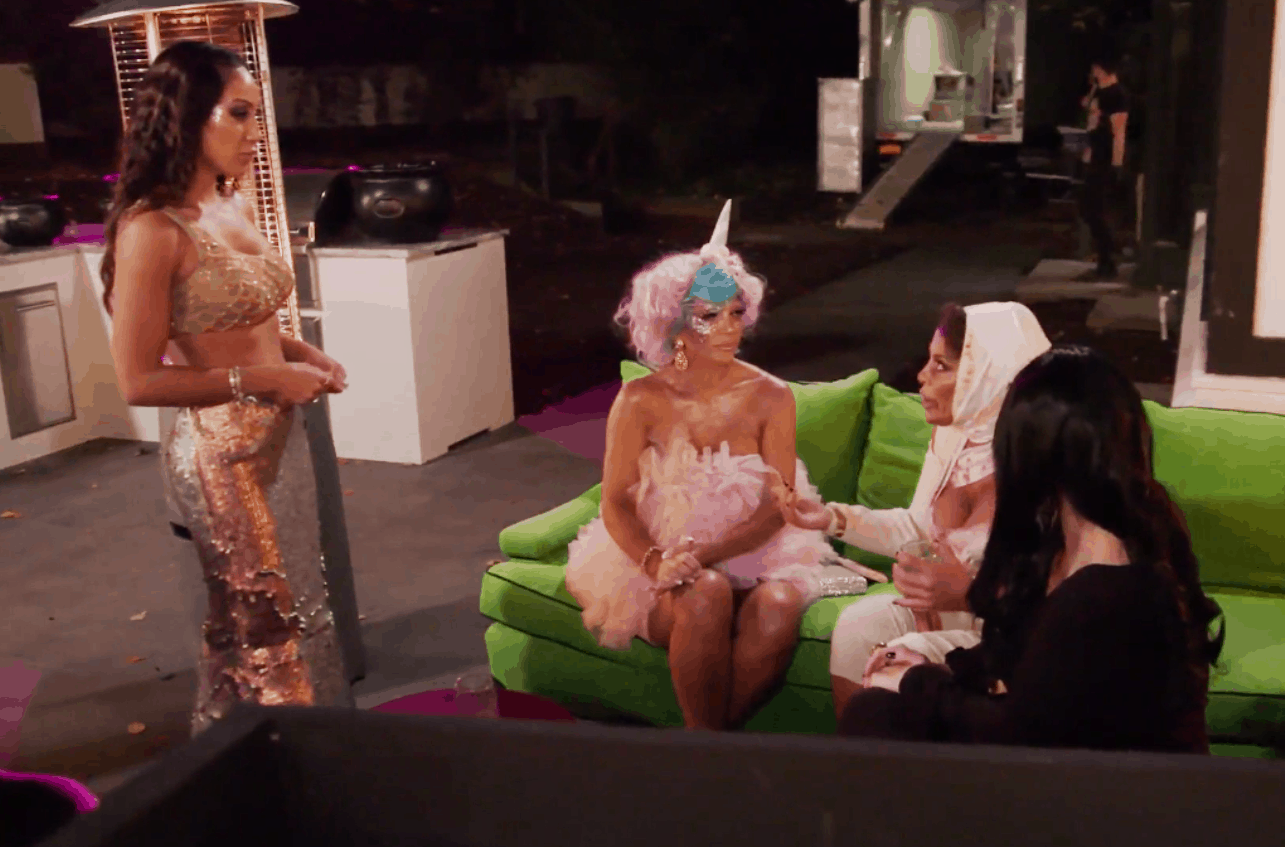 The Real Housewives of New Jersey have arrived at the season finale! Let’s get dressed up for the Halloween/birthday party and celebrate the end of Season 11, shall we?

The season started with that awful analogy and a battle between Jackie and Teresa that was a little tiresome. Jackie can say it was an analogy all she wants, but her argument loses credibility when she knows Teresa is challenged with the English language. We have been strung along all season about Teresa’s guy only to get a little dinner scene plopped into this episode, so that was rather anticlimactic.

We FINALLY get to meet Teresa’s guy, Luis Ruelas. He has a player vibe, and the way he is looking her up and down in the car and salivating is nauseating. Teresa, who is always oblivious, sees this as adoration and she gets little butterflies in her stomach. She should be getting sick to her stomach.

Teresa shares that Luis is a father to two boys. She reflects on how Joe didn’t know how to act and show love. Luis is a prize since he hasn’t called her his b*tch wife — yet. He is 46 and is actually younger than Teresa. Luis comments on her giant eyelashes. Does this fool think those spider-lashes are natural? He must be into PDA since he gives her a big wet-smooch at the table. I have to say I have never seen Teresa this happy, but this guy seems to have ulterior motives. We will have to wait until next season to see his true colors.

Margaret is getting her house ready for Joe’s party. She is holding off on birthday sex if Joe doesn’t complete the tasks she assigned him 10 years ago. Marge gives him four days or no birthday sex. Is that a promise or a threat?

Melissa and Joe are discussing how they have been fighting with each other. Joe wants her to invest the same amount of time that she spends at work into him. Melissa doesn’t need him anymore and that bugs him. She used to include him with the photoshoots and events and now she goes on her own. Melissa took care of the kids so he could build his empire? Hmm, isn’t that a bit of a stretch?

Jennifer and Bill are having an anniversary dinner planned by Olivia (mini-me of Jen). She knows their union created their family. Jennifer wants the kids to be a part of it since they were the gifts created by their love. They share how they got engaged. The elder in the family proposes the engagement. Bill came to the party with no ring since he was a broke medical student.

Bill shares that he has a little something and gets down on one knee. He gives Jennifer a SPECTACULAR NINE-CARAT yellow diamond. I just love Dr. Bill, and Jen definitely has a good picker. Jennifer is sad that her mom never got to have this kind of love or marriage for herself.

Dolores is having Frank remodel her home. She reminisces about when he used to order her around like he does to his crew. Dolores wasn’t financially independent then or probably now either, and she is now like a newborn baby who can swim. She insists she is at peace with her relationship with David.

Dolores didn’t like being called broken by Joe Gorga. Frank very hilariously states, “Joe Gorga was born broken and stopped growing at 5’2″!” OMG, that is freaking hilarious, and that is why Frank is better to have around to film with instead of David the bore.

Teresa and her girls are trying to make apple pie with the apples from the orchard. How is it that she has had BESTSELLER cookbooks and she doesn’t know how to bake an apple pie? Teresa gets a text from Joe Giudice just to check in. She is pissed at him since he talked about his girlfriend on The Wendy Williams Show.

Teresa keeps her “real moments” to herself. Darling Teresa, get off a reality show if that is the life you want! Gia and Milania are both okay with their mom and dad dating other people. Milania, whose voice has gotten so deep, wouldn’t have gone for it two years ago but she is at peace with it now.

Jackie and Evan are going as Sonny and Cher to the Halloween party. She tries to be funny with Evan and says she could go as the girl from the gym. Evan just laughs it off, but she might have his wheels turning on that great idea. He can always fantasize about it, right?

Jennifer is going as J-Lo. Bill has given her a two-shot limit for the party. Jennifer wants to get “turnt up” and party like a rock star.

Frank is dressing as the very flamboyant Joe Exotic. He looks good in that costume. Frank is over the top and not afraid to embarrass himself.

Melissa and Joe are going to be a mermaid and a merman. She convinces him that mermen are cool and like to chase the mermaids. Melissa doesn’t want him to bring up to Margaret the fact she called him a chauvinistic pig. You know he is going to definitely seek her out to get screen time.

Margaret is Morticia Adams and Joe will be Gomez from the Addams Family. I guess Joe is getting some action since the house renovation is done. Margaret can finally stop nagging him to finish her tacky home.

I have to say I LOVE Halloween parties. Margaret’s party décor is awesome, and the event planner, Larry, did a great job. Marge Sr. is a jacked-up Marilyn Monroe. How fitting is that?

Jackie and Evan arrive as Sonny and Cher. Jennifer as J-Lo and Bill as Prince look great. Dolores is an accident victim, and I just don’t get her costume choice. Gorga has called her a broken woman and she shows up in a costume to prove that point!

Jennifer has bellied up to the bar already. She is showing off her lack of body hair from her nooks and crannies. Frank is proud of his hairless butt cheeks. I could have done without the visuals in this scene.

Dolores asks, “Where is Melissa and Joe?” She wants to talk to them and let them both know she is still upset about the poll they took on her relationship.

Teresa’s costume is allegedly cotton candy. She looks more like a jacked-up “My Little Pony” with a unicorn horn attached very securely to her block head. I am surprised she allowed herself to be made up like this. Teresa didn’t bring Luis with her so the girls are bummed.

Jennifer is sloppy eating and is drunk off her a*s. She is dropping plates of food and speaking in a shrill voice. Dolores is trying to get Jennifer to hydrate so she doesn’t get sick — again.

Margaret is giving Joe a sweet shoutout for his birthday. She thanks him for allowing her to be herself. Marge doesn’t even look like the same person he married since she keeps changing her looks.

Joe, the caveman, talks to Margaret about the whole chauvinistic comment. Margaret doesn’t want Joe to hold Melissa back. She thinks he is still living in 1985.

Teresa and Dolores commiserate over being questioned about bringing a date. At this point, they both have to take the good with the bad. Dolores advises Teresa to not let them be involved in their relationship.

Melissa talks to Dolores and Teresa about Joe. Dolores resents the whole poll and Melissa is taking all the blame for it from Dolores. She said the group had the same question.

Dolores pivots the conversation to Melissa and Joe’s marriage then. Melissa says, “Whatever you think I am going through is worse than you think.” She wants them to back off and let her handle it on her own.

Bill makes a great comment: “Doesn’t he have insight when he is insulting women?” Bill wants the guys to just learn to listen. Joe tells MY PRECIOUS BILL to, “Shut the f*ck up!” Oh no he didn’t!!!

Dolores thinks Joe has to realize he can lose Melissa before he will change. Merman Gorga approaches and he is asked to apologize for his broken comment. Dolores suggests he gets insecure when Melissa gets more independent.

Melissa won’t answer Joe when he asks her if he is okay with change. She does make a wise move and refuses to discuss their personal business with the ladies. Melissa lives an old-school life and she doesn’t want that anymore.

Melissa and Joe talk off to the side and she reminds him that he is very lucky. She wants to be fulfilled as more than just a mom and a wife. In her ITM, Melissa is exhausted dealing with this. Joe wants her to shut up and they decide to go home early.

The ladies decide to dance and enjoy themselves. Jackie reminds me of Elaine from Seinfeld when she dances all herky-jerky. Bill with his bushy hair and Jennifer are just adorable together and seem really happy. Teresa and Dolores’ costumes are not working for them at all.

Melissa is expanding her brand by launching a new workout line. She maintains her hardest job is still the work she must put into her marriage.

Margaret’s renovation is done. They are now looking for another project to bicker over.

Jackie had a double bar mitzvah for her boys and the party was perfect. She didn’t allow any rumors or analogies to complicate it.

Jennifer is still not speaking to her mom. She can’t find a housekeeper yet who can deal with her tone.

Dolores is still independently with David. She got a thigh lift (didn’t know that was a thing) and we find out at the reunion that she also got a vaginal rejuvenation.

Teresa is still madly in love with Luis. They bought an investment property together, and it’s stocked full of pineapple juice. Who is advising Teresa? Why would she get involved financially with a guy she just met? She will just never learn.

See you all next week for the two-part reunion, and be well!

WHAT DID YOU THINK OF THE FINALE? TELL US IN THE COMMENTS!