RHOBH Premiere Recap: Garcelle Confronts Lisa Over Treatment of Denise, Erika Opens Up About Taking Anti-Depressant, Plus Kathy And Crystal Make Their Debut

by Julia May 20, 2021 488 comments
ShareTweetWhatsappPinterestRedditTumblrMailFlipboard 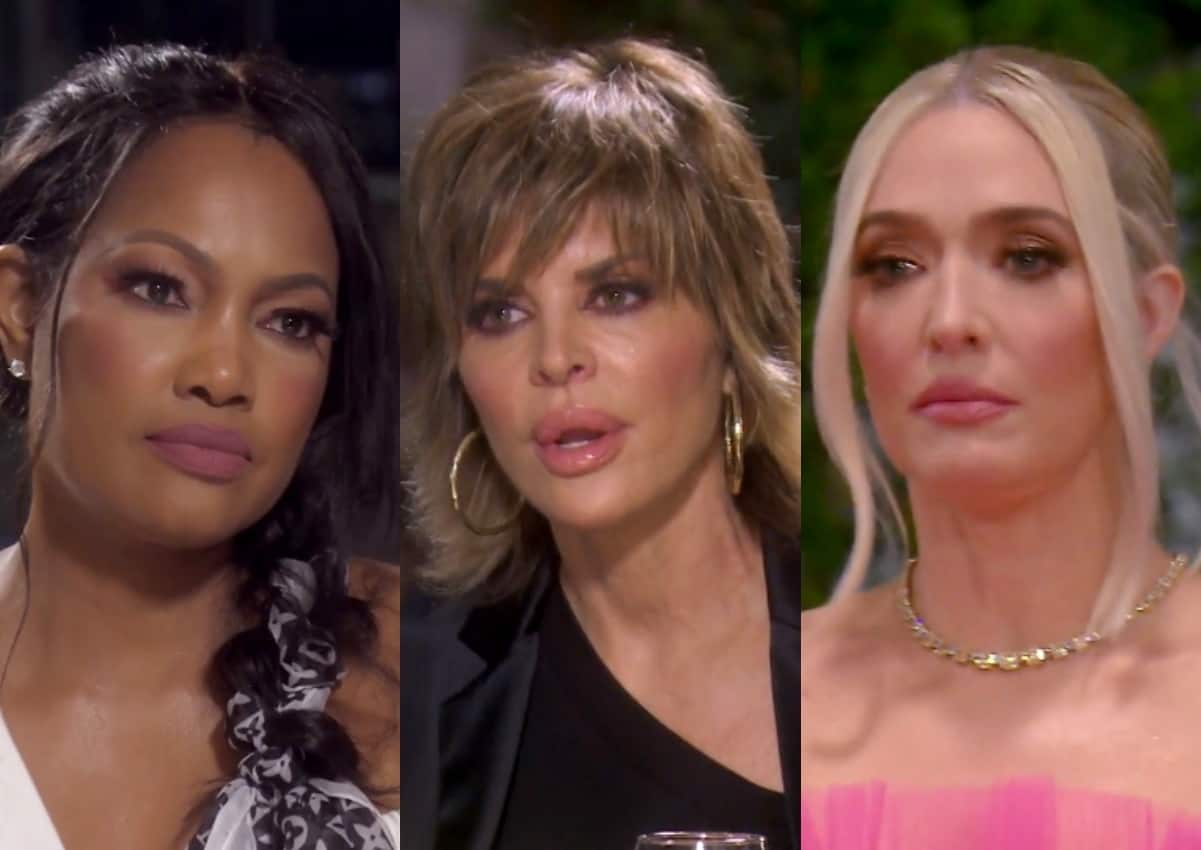 It’s a brand new season of the Real Housewives of Beverly Hills with some brand new faces (and I’m not just talking about Kyle’s nose job). The foreshadowing is top-notch and some haunting questions linger, leaving everyone wondering, “What is the lie? And who is being played?”

The premiere kicks off with a glimpse into Kyle’s current world. When did Portia become 12 and WTF happened to Kyle?! Apparently, she “broke” her nose during filming, and shabam, girlfriend gets a new nose out of the deal. Rinna pops over to catch up with Kyle and they discuss how excited they are to FINALLY hang with the ladies. It. Has. Been. A. Year. And they have really tried to stick to their pods for safety and cautionary purposes during the pandemic. For Kyle, that means traveling to Mexico with Dorit and PK, but I digress…

Kyle mentions that maybe she should reach out to Garcelle, and even though Garcelle unfollowed Kyle on social media, she really wants to smooth things over with her. Rinna mentions that she is going out for drinks with Garcelle and you can tell Kyle is annoyed she will get to Garcelle first. Interesting how desperate Kyle and Rinna are to get back on Garcelle’s good side, isn’t it?

Enter Erika and Dorit cruising around town in Dorit’s hot new whip. They are on their way to Kyle’s for a mini-reunion and they could not be more excited. They pontificate about how nice it was being in their bubbles for a little bit. Erika reflects on how good it was to spend time with her husband, Tom, and she reminds us of her life nine months earlier. In case ya’ll forgot, she was on Broadway!

Look at Sutton throwing back shots with Garcelle! New year, new lady! Garcelle explains that she has spent a lot of time with Sutton this past year, and I am here for this friendship. Garcelle appears to have NO time for the Rinna/Kyle bullsh*t, but she will entertain the apology tour that she is about to be a part of.

Can we talk about Dorit’s mismatched shoes? Clearly, it’s a lewk, but COME ON. Erika and Dorit plop down on Kyle’s bed alongside Rinna and they all lie and tell Kyle how great her (bandaged) nose looks. Dorit explains that she is desperate for a dress-up night, so she has decided to host a backyard barbecue. The only caveat is the women must get decked. Hello, glam squad?

Ah, to be rich during a pandemic… Dorit’s kids legit have a SCHOOL in her house, and Sutton is renting Kyle’s Bel Air house for $20,000 A MONTH. Kyle shares that she gave Sutton a friend and family discount, but Sutton better hope the renovations on her new house happen ASAP or else she is gonna be stuck writing a check to Kyle for too long!

Later, Garcelle meets up with Rinna. Rinna is (terrified of Garcelle) feeling guilty for the way things went down with Garcelle last season and hopes she can fix their relationship. Garcelle wants Rinna to understand why she was upset with the way she treated Denise last season, but she doesn’t have high hopes.

Rinna tries to do some small talk with Garcelle, and she claims that through some self-reflection, she is sorry for everything she did and said. She never meant to hurt Garcelle and admits she was harder on Denise than she needed to be (well, duh). It seems like Rinna is praying that her quick apology can save her from the wrath of Garcelle.

But let’s get real — Rinna cannot quite stop herself. She goes on and on about Denise’s relationship with Brandi, and Garcelle smells her BS. Why does Rinna always feel the need to hold everyone accountable?! Mind your business. Garcelle does not give Rinna a break and reminds her of exactly why she sucks. Rinna repeats over and over again that she was a real C-word (cringe), and Garcelle decides she will move forward with Rinna, although she knows she cannot trust her one bit.

Yas. Mikey, Erika’s Creative Director, is back and helping her sort through her overflow closet. Who has one of those — an overflow closet AND a Creative Director?! Erika shares that quarantine has taught her that “on a dime, life can change.” She insists that Tom is “busy” despite courts being closed, and he is hurting for business to return to normal. Holy foreshadowing…

Wait… so Garcelle named her fish after Dorit and Kyle? Talk about throwing shade. Kyle’s the goldfish, cuz ya know, she is “ordinary.” Garcelle gives Dorit a tour of her new place and fills her in about how it went with Rinna. Dorit hesitantly claims she can trust Rinna now, although she also got off to a rocky start with her (hello, coke in the bathroom!!).

Kyle has always worked with the Children’s Hospital of Los Angeles, and so her sister, Kathy, has hooked her up with Crystal, one of her friends who is collecting for a toy drive. This seems like a stretch of a connection, which only becomes more apparent once Kyle and Rinna arrive at Crystal’s beautiful home.

They are greeted by Crystal’s husband, Rob, the guy behind THE LION KING! Crystal is in the kitchen cooking and Kyle attempts to make connections with the couple so she can feel cool and fit in. Typical. Crystal gives Rinna and Kyle a tour, shows off the original casts from The Lion King, and Rinna scoffs at all of Crystal’s name-dropping. Hello, pot. Meet kettle.

As the ladies sit down and get to know each other a little more, Crystal talks about Chinese traditions and culture — the importance of having a son and the number eight — and Kyle feels connected to her type-A personality. She gets an invite to Dorit’s “barbecue” because she passed Kyle’s test.

It’s the day of Dorit’s barbecue, and Erika has decided to dress as though she is an “expensive hooker.” Normal attire, for sure. LOL @ Dorit’s kids judging her ensemble. TBH, Dorit has had better looks. Guess a few months off made her a little rusty. All of the ladies bring in hair and makeup and break out the extravagant gowns. Everyone is decked to the nines. However, the newbies, Kathy and Crystal, are a bit perplexed to see the clothing taste and the lack of food in this group. WHERE ARE THE BURGERS?

YOU GUYS. Garcelle in her purple suit… and Kathy thinking Garcelle was Kyle walking in. Of alllll people to confuse Garcelle with! Kyle, her nemesis. Speaking of Kyle, Dorit calls her out for coming late because of glam (remember the fight last season), or maybe it was because Kyle was trying to squeeze into that teeny tiny dress! Side note: Sutton calling Mauricio “landlord” is everything.

Rinna invites all of the ladies on a trip to Lake Tahoe (yes, even Kathy and her dental tools… evidently Kathy enjoyed playing dentist as a little girl and went to extremes when she forced neighborhood kids to play along). But Garcelle shares with Sutton that things with Rinna aren’t 100% better, despite what Rinna may think. Someone better give Rinna that memo and have her focus on getting “better, not bitter” even faster…

Cracking up at the way Kathy pronounces Dorit: Door-it. Can we all agree Kathy is hilarious… maybe without trying to be? Leave it to Rinna to make the ladies play a game: the best and the worst part of COVID. Sutton didn’t get out of bed for eight weeks, Kyle loved spending time with her family, Crystal enjoyed having her kids around, and Garcelle wished she had her kids more so she could make TikTok videos. Where’s the lie, though?

Erika says that she went through a very dark time during the quarantine. She felt dread and went on an anti-depressant. Erika hints that she has problems in her personal life: “The bigger your life is, the bigger the problems are.” In her confessional, she shares that there is a lot the ladies don’t know about her, but honey, everyone is about to know EVERYTHING…

TELL US – WHAT ARE YOUR THOUGHTS ON THE RHOBH PREMIERE EPISODE?