RHONJ Reunion 2 Recap: Jackie Slams Teresa For ‘Trying to Ruin Her Marriage’ as Margaret and Jennifer Continue to Throw Jabs, Plus Luis Joins the Reunion Stage

by Elizabeth May 27, 2021 158 comments
ShareTweetWhatsappPinterestRedditTumblrMailFlipboard 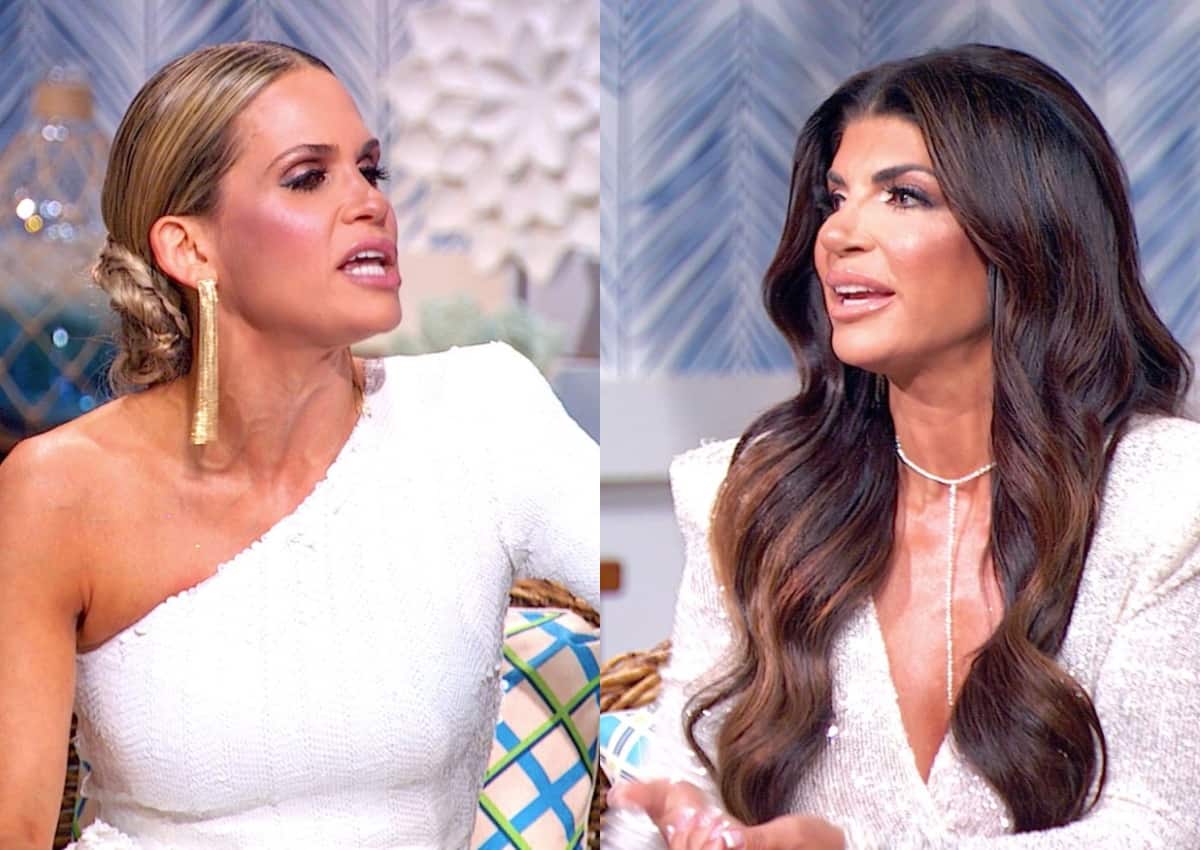 We are now back for the intense conclusion of The Real Housewives of New Jersey reunion. I hate to disappoint you all, but there is no meat or intensity in this final reunion episode. Let’s watch and dissect the drama, shall we?

Jackie calls Jennifer out on rumors about her too. She never says what those rumors are, which is pretty anticlimactic. Margaret acts like she was concerned for Jennifer and her drinking. Jennifer doesn’t want to be called a sloppy drunk. She said her kids found it comical that she acted like that. Jennifer thinks a sloppy drunk means someone who takes a stranger home for sex. Nope, honey, you can be sloppy without dragging a stranger home with you from a bar.

Teresa wishes Margaret would have a drink so she can loosen up. I can understand Margaret being turned off from drinking after being raised by her partying crypt keeper mom.

Why is Jennifer constantly bringing Teresa into conversations and asking for her corroboration? Teresa acts like women who get sexually harassed are weak because they couldn’t stop it. She is victim shaming. Teresa won’t allow anyone to put their hands on her. She can’t possibly understand this concept since she has never had a real job and her boss now is a gay man.

Margaret left a bottle of champagne and her book in Jennifer and Teresa’s rooms. Jennifer didn’t acknowledge the gifts. She acts like she didn’t know the book was from Margaret. Teresa didn’t acknowledge the gift since Marge called her the exorcist. Marge doesn’t think Teresa is as dumb as she seems. I strongly disagree. She doesn’t play stupid — she is most definitely a big dumb-dumb.

Dolores says David is upset over the vaginal rejuvenation surgery. She gets called out on her relationship with David. Dolores is getting her season tossed in her face, and they’re illustrating how David treated her basically like a high-paid escort. She is still with David and hasn’t moved in with him. Dolores is renovating her house to ding him for not living together. She only sees him once a week.

Dolores thinks David doesn’t know how to be in a relationship. Wow, David has four kids and has been married. Andy super-shadily asks, “Does David want to get married to anyone or just not you?” Dolores says he doesn’t want to be married to anyone. She would accept a marriage proposal if he asked.

Teresa distracts Andy with her plumped-out lips. She has to share that Luis likes to suck on them. BLECK! Melissa says Luis is really personable and they like him. She is really quiet this entire episode. Joe must have hit the mute button on his subservient wife.

Teresa’s clips showing how she was always hyper-sexual are brought up. Luis likes when she dresses so out there. Yeah, so all of her sexual parts are easily accessible. Andy asks, “Are there wedding bells in the future?” Crickets on that one.

Teresa claims that Joe never admitted that he cheated during their marriage. She says when Joe was “away” she was faithful to him. Teresa says if he put his pee-pee in someone else she wouldn’t be with him. Oh, that pee-pee was in and out of all kinds of tricks throughout Jersey.

Teresa says that Joe and Luis have met in the Bahamas. YIKES, that picture of Luis in the Bahamas is horrible! Luis looks like he just ate a lemon or a lot of pineapple! The kids wanted no PDA or TMI during dinner. Teresa claims Joe’s heart was broken into a million pieces when he saw Teresa with Luis.

Teresa, Gia, and hopefully Milania will see a therapist. Gabriella and Audriana have adjusted well to this separation. Teresa always thinks that being strong is the advice that you should incorporate into parenting. Yeah, look how that mindset has served you SO well throughout your life.

Luis has watched all of the seasons and wants to treat her better than she has ever been treated. Teresa doesn’t seem worried about the story about Luis’ sexual behavior. Kim D. has even weighed in on this issue. She claims he has emotionally abused past girlfriends and damaged their property. Teresa thinks his exes are thirsty. She won’t listen to a sewer rat.

Teresa and Jackie go at it now over the rumors. She thinks that Jackie took it the wrong way. Jackie said that Teresa tried to ruin her marriage by spreading that rumor. Teresa accurately says, “You just don’t understand me.” Yeah, because you are grammatically and morally challenged.

Joe B, Evan, Frank, Joe G., and my favorite, Dr. Bill, join the group. Bill says that Jennifer deserved the ring since she gave him five kids and 18 years of marriage. He is a keeper and looks very dapper.

Evan is asked about how the rumor has affected him. He was concerned it would affect his reputation at work. Evan isn’t happy that his kids have heard these rumors. He thought the blow job issue was a problem, but now he has the cheating rumors, which are worse.

We get to see the montage of clips of our Jersey guys having fun. YUCK, we have to see Gorga’s little baby a*s again. Frank thought he would have been able to beat the guys. He thinks they played better when they heard about the prize.

Bill doesn’t care if Jennifer lets her hair down. He just wants Jennifer to not puke in the Ferrari. That is a reasonable request.

Joe B. gets asked if he is submissive in the relationship. He claims his wife boss sometimes gets angry. Margaret thinks Jennifer dragged Joe into the rumor mill. Joe finally has to answer the question that we all want to know. Where did he hear the cheating rumor about Evan? Joe claims he heard it from the cackling hens at his house the next day. He was trashed the night before and he was too busy puking in the bushes to hear it at the party.

Joe B. thinks that having an affair is their business. It isn’t his place to share that information, and it violates guy code.

Teresa thinks that hearing a rumor and repeating it isn’t spreading it. How has this woman got through life with her reasoning skills? Teresa didn’t want to tell Jackie at the party, but it was okay to tell her good friends at the party. Jackie thinks Teresa saw her happy at the party and she wanted to upset her.

Teresa says that she didn’t go ballistic when Kim D. brought up Joe’s cheating rumors. She doesn’t think throwing a chair at Kim D. was going ballistic. Dolores tries to reason with Teresa that she has to understand why Jackie got upset. Andy is absolutely correct that Teresa gleefully spread that rumor at the party.

Teresa hates the jail thing being brought up. Jackie tries to get her to understand she had to respond to Teresa’s attack. She might as well give it up since Teresa is way too arrogant — and frankly, stupid — to understand that actions have consequences. If she understood that concept she would have never ended up in JAIL. I am announcing it to all Blurbers, TERESA WAS IN JAIL!

Jackie is talking about Teresa’s confident woman comment, and she needed to retaliate. Teresa, with her mouth wide-open dripping with lip gloss, is trying to process this conversation. She has her little wheels turning in her head trying to comprehend why someone would strike back when you say hurtful things.

Danielle Staub is even allowed to weigh in on the rumor. She thinks that Margaret is the source of the rumor. Jennifer had a theory that it was Margaret too.

Evan weighs in on the rumor and Teresa can’t even look at him. She just can’t take accountability for her actions. Gia had complaints from her sorority. What does that mean that Gia was almost put into a meeting to see if she was okay? Was she going to be tossed from her sorority?

Joe Gorga refuses to say that his dear sister wife shouldn’t have said the rumor. He has been forced to show complete alliance to his sister, and they have to drag it out of him that she shouldn’t have done it.

Teresa apologizes very insincerely to Evan and Jackie. She finally admits there was no substance to the rumor. Teresa says it will never happen again .

Jackie is sorry that Gia was hurt by the analogy. It wasn’t her intention to hurt her daughter. Teresa decides to offer an olive branch, and she wants Luis to go golfing with the guys. Evan goes over to Teresa and gives her a kiss and they agree to talk later.

Andy decides then to do a pineapple cocktail toast to the end of the season. Luis, wearing a purple coat and smacking his gum, comes out and brings Teresa her pineapple drink. He likes that Teresa is open, real, and genuine. Luis obviously doesn’t want an intelligent woman or someone who is self-aware.

Luis proposes a toast to next season having no drama. Little Andy doesn’t like that at all! Teresa doesn’t want Luis out of her sight. He gets added to the wolfpack backstage, and the guys toast to their relationships, which are obviously more fun.

WOW, this season started off being about a “bang” and closed with some feuds being resolved and others being swept under the carpet. Thank you to everyone who rode out the season with me!

TELL US — THOUGHTS ON THE REUNION OF RHONJ?