by Ashlee Mason May 30, 2021 583 comments
ShareTweetWhatsappPinterestRedditTumblrMailFlipboard 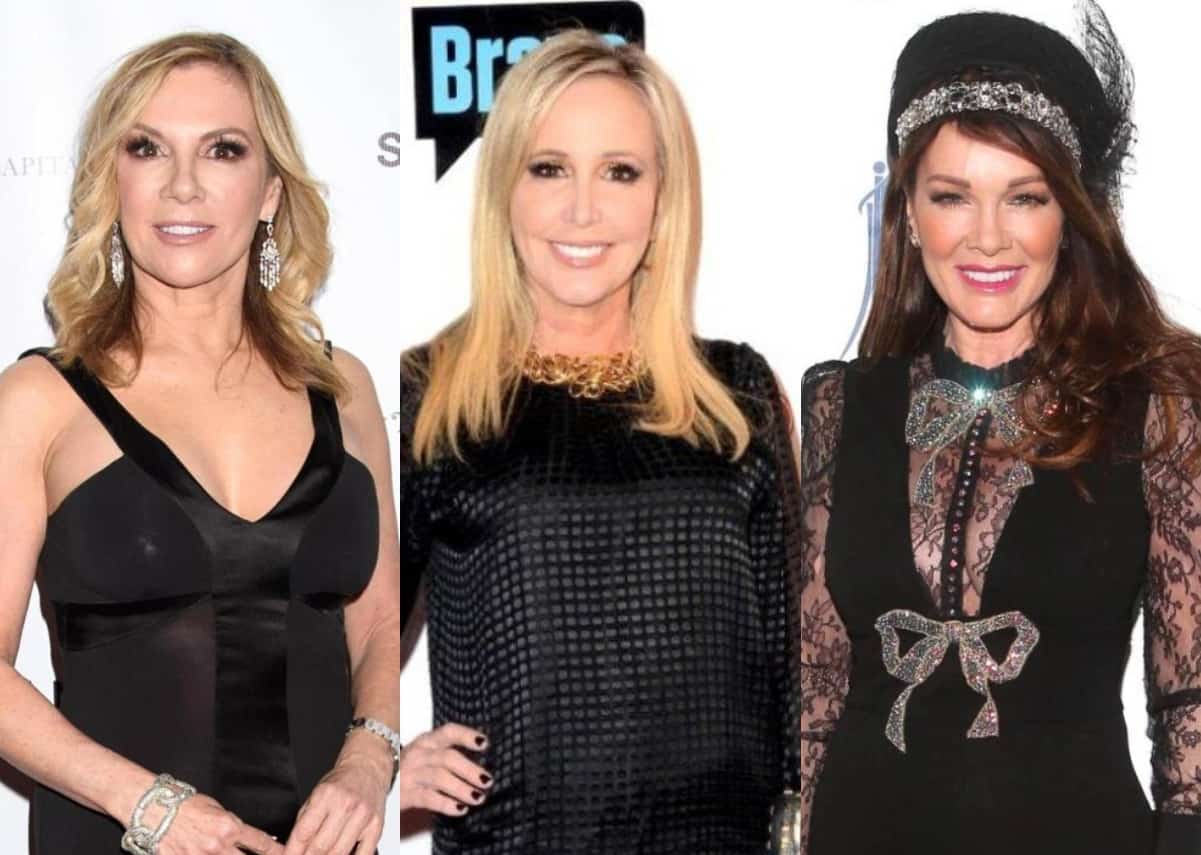 Happy Memorial Day Weekend, Blurbers! And welcome back to Open Post. Summer is just around the corner, people are getting Covid-19 vaccinations, and the world is… maybe coming back to normal? Maybe? Whatever ‘normal’ is considered to be these days? Who knows. Anyways! Every Sunday afternoon, Reality Blurb brings you Open Post, a place to let your hair down and talk about whatever you want! This includes shows we don’t normally cover here (shout out to Blurber LOLicious for bringing us 90 Day Fiancé recaps on this very thread for the last several weeks), and, well, like I said… whatever you want. The only rule is to be respectful of other posters, and not get into any stupid arguments.

This week, we’re doing a very light-hearted Top Ten list (since most of you are probably camping anyway), and if you’re an animal person at all, THIS ONE’S FOR YOU. Per Blurber 4/20’s request, we’re doing the Top Ten Real Housewives Pets! Hooray! Also, I think it’d be really fun if the Blurbers post pics of their animal companions in the comment section below, so we can all ‘oooh’ and ‘ahhh’ at the cuteness. So, get your chew toys out, and quit chasing your tail, because it’s time to get to it!

Ramona Singer’s dog Coco from RHONY – “Coco? COCO?!?” Ramona’s elderly pooch is a walking example of “like owner, like dog”, especially considering how often they both have accidents on the floor. They also kind of look alike. Coco is pretty loyal to Ramona, but if you were ever a dog with a screechy-voiced human in a past life, you probably utilized the old ‘selective listening’ trick when your human got too needy.

Kyle Richards’ dog Storm from RHOBH – Can you blame him for trying to make a run for it all the time? (Okay, that was admittedly MEAN, and I don’t actually want anyone to go through the devastating experience of losing an animal, but… Kyle is easy to make fun of, so that’s that.) Here’s a clip of Storm escaping from Alcatraz amid the chaos of Kyle’s family Christmas card photoshoot:

Kameron Westcott’s dog Louis Vuitton from RHOD – All I can think about when I see Kameron’s dogs is that they probably take pink sh*ts from all that Sparkle Dog. After Louis flew up to doggie heaven in 2020, Kameron adopted Pomeranian Fanci, and hired dog behaviorist, Brad Bevill, to give her some tough love on how to properly train her new puppy. Kameron’s not my favorite person in the world, but I did enjoy this clip of her interviewing Louis:

Sonja Morgan’s dog Millou from RHONY – I’m pretty sure Sonja was the first Housewife to hold an on-camera funeral for her fallen pooch, Millou. If you recall, this is right around the time when Sonja really started embracing her Miss Havisham persona. She hired a Swami priest to conduct the ceremony by the banks of the East River, and in typical messy-Morgan fashion, she pulled a Walter Sobchak from The Big Lebowski and inadvertently blew Millou’s ashes all over herself and the priest.

Lisa Vanderpump’s battle swans Hanky and Panky from RHOBH – They’re big, they’re bad, they know taekwondo, and aren’t about to let any backstabbing fedora’d trick cross their waters without a fight. Lisa has a lonnnng history of naming her pets after sexual innuendos, and I think Hanky and Panky are my favorites of the bunch. Nestled in a moat in front of Lisa’s grand Villa Rosa, H & P dutifully guard the SUR restaurant owner’s home from evil spirits. 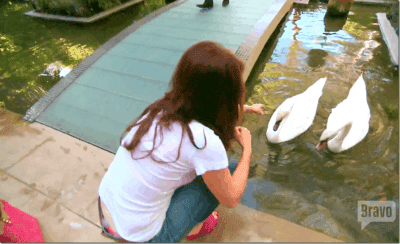 Carole Radziwill’s cats that are all named ‘Baby’ from RHONY – This list needs some kitteh representation BADLY! Help me out, Blurbers: were/are there any other cat people on Housewives besides Carole? I can’t think of any off the top of my head. Anyways, here are Carole’s two cats living the highlife in her walk-in closet that I WOULD KILL FOR.

Shannon Beador’s Golden Retriever Archie from RHOC – Yay, it’s Archie! I have a soft spot for Golden Retrievers because my parents have had two of them in the last twenty years. They’re such gentle, sweet-natured giants. Shannon is 100% the type that throws full-blown birthday parties for her dog (I usually just get mine special treats and call it a day). I thought it was hilarious when she informed us that Archie was raised at the Four Seasons in San Francisco. MUST BE NICE.

Bethenny Frankel’s dogs Biggie and Smallz from RHONY – Gosh, I didn’t realize how many New York pets made the list until I finished this post! Oh wells. I don’t know if any of you watched Bethenny’s new HBO show The Big Shot with Bethenny (it was terribly dated, in my opinion… neurotic, over-demanding “work is life and life is work” bosses are people that many of us are actively running away from in this day and age), but in the first episode, she remarks of her two rescue pooches, “They’re talent; they don’t do anything, but they have 37,000 followers.” That is the most Bethenny Frankel statement ever uttered. 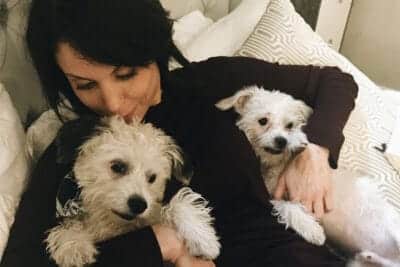 Monique Samuels’ parrot T’Challa from RHOP – The bird that stole the hearts of all Americans! Or maybe just some Housewives fans. Regardless, what’s not to love about T’Challa? He’s Monique’s emotional support bird, could talk sh*t on other cast members, and returned home by all himself after he flew away for a few days! Last season of Real Housewives of Potomac was marred by the ugly fight between Monique and Candiace Dillard Bassett, and it’s a shame we won’t get to see anymore of our beloved Chris Samuels now that Monique is leaving the show. The REAL tragedy, though, is that we won’t have T’Challa, who is more than willing to check Dr. Wendy Osefo when she drones on about her four degrees. I couldn’t find a short video of T’Challa flapping in Wendy’s face, but this screenshot is as good as gold, so enjoy. 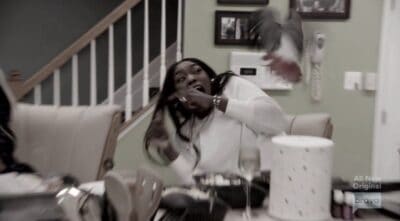 Lisa Vanderpump’s dog Giggy from RHOBH – Yes, LVP’s pets get TWO entries on this list, which should be no surprise since we’re dealing with one of the biggest animal lovers on the planet. Giggy was truly the breakout star of Real Housewives of Beverly Hills when it first aired, and EVERYONE wanted a seat at the little sex monster’s VIP table. Even though Giggy is up in heaven with an immaculate mane of hair now, back on earth, he had alopecia, a skin disease that gave Lisa an excuse to dress him up in as many dog tuxedos as she pleased. My favorite Giggy moment was when Adrienne Maloof’s bitchy chef got annoyed at him drinking out of their fine crystal stemware. (Well, anytime Adrienne’s chef got annoyed was a good time, to be honest.) Here’s an older video of Lisa fawning over her precious Giggy. RIP, little fellah.

SHOW US – Your pet pics!