Home Real Housewives of Beverly Hills News RHOBH Recap: Sutton Suffers Meltdown Over Being Left Out of Drink Prank and Continues to Butt Heads With Crystal

RHOBH Recap: Sutton Suffers Meltdown Over Being Left Out of Drink Prank and Continues to Butt Heads With Crystal 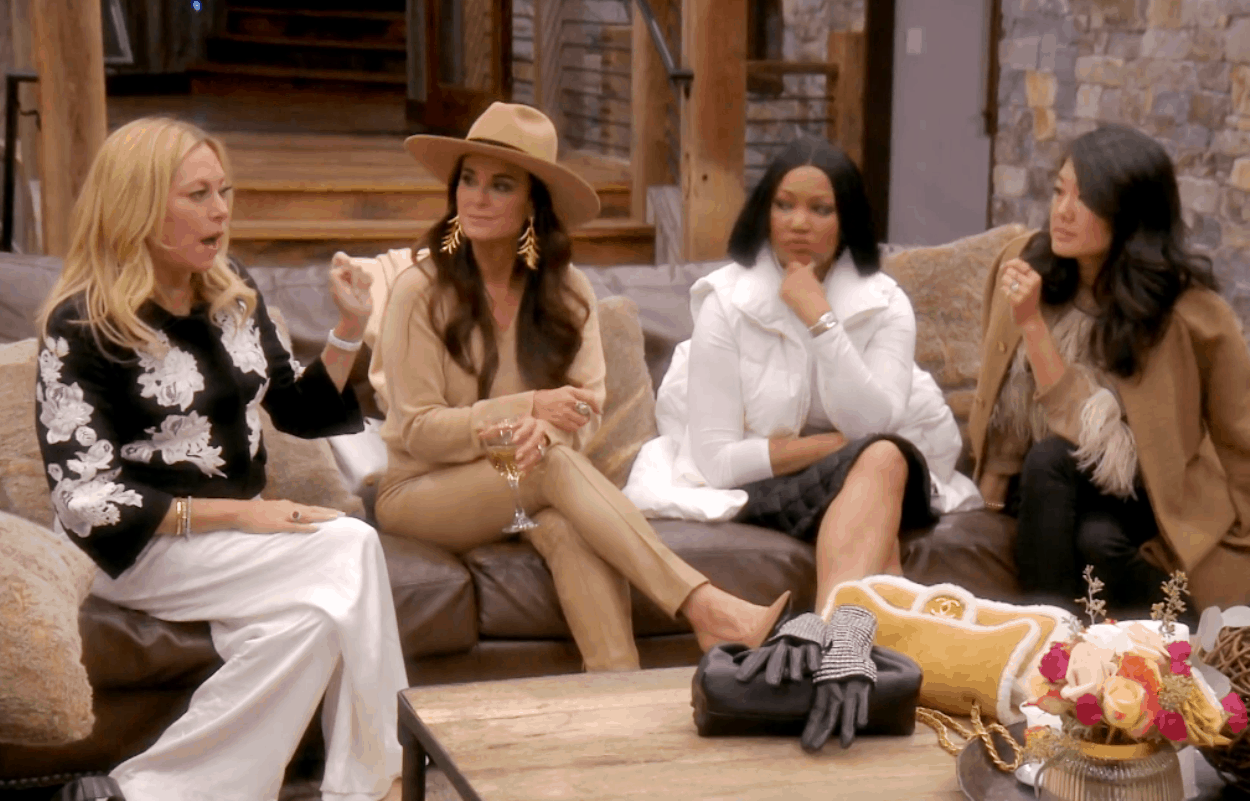 The Sutton/Crystal feud starts with a small spark, but as time wears on during this Tahoe trip, an explosion between the two women occurs. On this episode of the Real Housewives of Beverly Hills, a practical joke goes much, much deeper.

Sutton and Crystal: Phase one of the feud. They are locked into the topic of race during a late-night hang in Tahoe. Crystal becomes so perplexed by Sutton’s outrage regarding race that she straight-up asks Sutton, “Are you that girl? I don’t see color?” Sutton becomes emotional about this, and to Crystal, that means Sutton is just brushing racist remarks under the rug. Sutton tries to explain that she is worked up because she sees people as people, not as races. She asks Kyle and Crystal to “give me a f*cking break,” but Crystal lets her know that Sutton is not off the hook.

After Crystal disses Sutton’s age in her confessional (Sutton is *not* 20 years older… she is 12 years older), Crystal realizes that trying to reason with Sutton is like talking to a brick (crying) wall. She decides to just agree to disagree, and Kyle butts in to suggest they all just go to bed — considering how hot tempers are.

The next morning, Erika strolls into breakfast with her shades on as if she is some sort of celeb, and the rest of the ladies get to hear about Kathy and Kyle’s bed-sharing. I am here for Kathy and all her wild antics — even if she doesn’t know what Red Bull is. Since girlfriend was up snacking and downing energy drinks at 1:30 a.m., Kathy chose to sleep rather than hang with the women. It all kinda makes sense now why Paris is the way she is, no?

The breakfast is awkward between the Sutton/Crystal tension and the election 2020 talk. Rinna takes this as an opportunity to name-drop (OF COURSE — because how else would she stay relevant?!). She reminds the ladies that the guy on The Apprentice is not the guy she sees in office. Translation: She knows Trump.

While everyone gets ready for the day’s outing, Sutton pulls Crystal aside to talk about the race discussion that was held the night before. Sutton felt insulted by Crystal’s comments about not seeing color. Sutton gets an apology from Crystal, and Crystal makes this a teachable moment for Sutton. She explains that she has seen racism firsthand growing up. Crystal states the importance of color in the world and how she feels like she needs to educate Sutton. Sutton tries to relate to Crystal being Asian by talking about how people in New York made fun of her Southern accent and asked her if she was a racist. Um, not the same.

After leaving Kathy (aka Sleeping Beauty) home to rest, the ladies pile into vans and make their way to the bike track. Whilst passing through the town, Erika hits them with a fun fact: Gardnerville is where the most fugitives live in America. Hmmm… why does Erika know that? And looks like she just outted where she is heading once the sh*t hits the fan… #noted.

The bike track activity is less than thrilling, but it does look a bit frightening. Being stuck with Sutton during this ride sounds absolutely terrible since all she does is complain and cry about using the break. Totally team fast bike for this one…

On the way back to the house, Garcelle lays down in the van to snooze (cuz let’s face it, these b*tches are boring), so Sutton and Crystal have a bit of a heart to heart about their families. Sutton shares that her father committed suicide 18 years ago and Crystal tells of how her father passed slowly. Are they having a friendship breakthrough??

Once back at the house, the good news is Kathy is awake, but the bad news is she appears to have put glue in her eyes. Can’t make this stuff up with these people. Everyone lounges around pre-dinner, and they discuss Sutton’s $2,000 slippers and other interesting things, like Paris Hilton. Kathy explains that Paris is a little more confident nowadays, but Garcelle does a good job of knocking her down a few pegs. Garcelle had a hard time with Paris always being on the phone at fashion shows, but Kyle explains that Paris is so shy that she would pretend to be on her phone instead of talking to people. Kyle warns, don’t judge a book by its cover…

Garcelle and Rinna being the first ones ready while the rest of the ladies glam up is cringey. Their situation is not 100% better at this point, but luckily the rest of the women break up the awkwardness. They head out to dinner, and I can’t help but laugh at Kathy’s outfit next to Dorit’s. Kathy attempts to be a part of the group and makes a toast to Rinna for planning the weekend. This dinner seems like it’s headed in a good direction.

So Rinna is launching a lip line? I guess it’s better than the diaper and the duster, amiright? Over dinner, Sutton explains her “sitch” with Crystal to Rinna and Erika. Sutton tries to pretend that because she is from the South, she has to prove she is not racist. Erika shuts down that chatter with a simple “no” because she, too, is a Southern woman, but she doesn’t comprehend what Sutton is attempting to explain. Erika’s face basically says “do not compare racism with being Southern.”

Dorit, “a child of the world,” inserts herself into the conversation and explains that she wasn’t even aware that one would assume people from the South could be considered racist. Also — is Dorit making fun of Sutton’s Southern accent? You are from Connecticut, girlfriend. When Dorit explains that maybe Erika does not have to feel defensive regarding her Southern roots because she has lived in a very multicultural world, Sutton freaks OUT. Dorit wants to know why Sutton is being so defensive. Even Garcelle, Sutton’s friend, believes that things are off with Sutton.

Dinner appears to be too calm for well-rested Kathy, so she decides to pull a bottoms-up prank. It goes a little something like this: Kathy pretends to chug an entire martini, but the truth is, there is water in her glass. Kathy rallies Dorit to play along, and the rest of the women look on with a mix of admiration and disgust.

Kathy keeps the prank going, and unbeknownst to her, so does Dorit. Dorit sneakily texts a few of the other women to partake in the bottoms-up game, but Kathy did not know they were in on the water secret. Talk about confusion and laughs… that is until Sutton pulls a major killjoy. Sutton can tell that something is up with this game and becomes hypersensitive to all of the ladies texting in secret. Her paranoia has got her thinking she is the only one left out of the joke and that freaks her out.

Post dinner, Sutton explains to the women in the van how upset she was during the game. When Crystal kicks Sutton to try and stop her from ruining the prank, Sutton takes it way too personally. She can’t understand why Crystal would kick her “skinny legs,” and she carries on about the whole situation.

Once back at the house, Garcelle (being the good friend that she is) asks the women if they were texting about Sutton over dinner. The truth is, they were texting about water martinis, but Sutton completely unravels. She becomes an emotional wreck and gets embarrassed when she has to sit down and talk through the issue. Sutton cries out, “I am a grown woman,” to which Kyle retorts, “Then act like one.” Yay Kyle for saying what everyone else is thinking.

Why are they having to unpack the practical joke that occurred at the table? Garcelle tries to break it down and figures out that everyone was punking each other, but this is getting complicated. No one looks as confused as Kathy. It is exhausting, and when Sutton tries to make Crystal look like the bad guy for kicking her, it gets ugly. Crystal has had it with Sutton’s antics and tells her, “Move on, I said I’m sorry.”

After everyone turns in for the night, Crystal phones a friend and talks to her about how “batsh*t crazy” Sutton is behaving. In the meantime, Sutton realizes Crystal forgot to bring her coat into her room, so being a good *friend,* she brings it to her. Uh-oh. Let’s just all agree that Sutton and Crystal are just not vibing and it doesn’t look like they will be forming a friendship any time soon… especially after Sutton gets a load of Crystal’s phone convo.