RHONY Recap: Eboni Confronts Luann for Calling Her an “Angry Woman” as Leah Calls Heather a “Karen” and Almost Come to Blows During Heated Argument 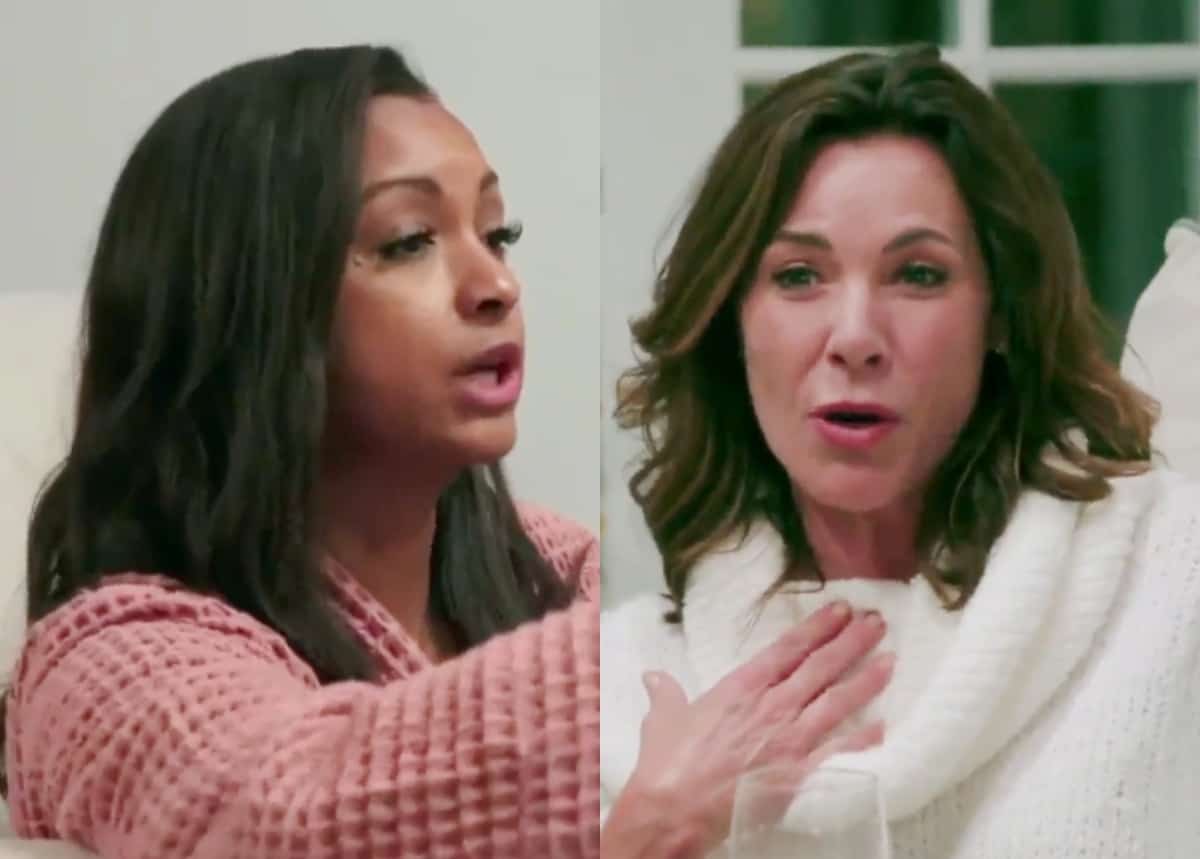 We are still in the Hamptons watching the train wreck that is called The Real Housewives of New York City. Leah is still stirring her cauldron and putting spells on the other women to convince them to banish Heather for good. Let’s RELUCTANTLY watch Leah stir the pot and cause more drama, shall we?

Eboni storms out of Lu’s house with Heather and Sonja trailing behind trying to show some solidarity with her. She wants to remove herself from this scene, and she throws her hands up in the air and says, “Bye, Queens!”

Eboni goes back to Ramona’s house and tells Leah that she was kicked out of Luann’s house. She tells Leah that Luann called her an angry Black woman. It is always interesting to see a story told back and to see how it’s shared based on how the person perceived it. Leah, of course, acts like she is appalled that her supposed friend Luann conducted herself with such racial undertones.

Heather tries to talk to the other ladies about racial conversations and how sensitive they are. She thinks it is about understanding someone else’s perspective. Heather has appointed herself to be the sensitivity monitor. She will soon regret appointing herself to that position.

In her ITM, Leah says very proudly that she would have burned the house down if that had happened to her. Eboni thinks that Luann has gotten used to being the etiquette queen. She believes her Countess title has elevated her to a level where she views everyone else as the commoners she used to preside over.

LONG side note: I don’t believe Luann had the INTENT to insinuate that Eboni was a stereotypical angry Black woman. Luann and Eboni were having parallel arguments that honestly had nothing to do with each other. Eboni heard the word angry and saw red. Luann heard an insult to her intelligence and couldn’t convey to Eboni that she was referring to RELIGIOUS education, not academic. What makes me the most upset is the heated argument started over our surly teenager, Leah, who had already departed the scene and left her carnage behind her for others to clean up.

Heather visits the room where Eboni and Leah are talking. She tries to relate to Eboni by saying she is affiliated with Black culture. Heather tries to show she has street cred. Heather, my “Holla Queen,” please just stop pandering to Eboni at this point. We get it — you’re woke and you have hung with Puffy.

Leah annoys the sh*t out of me in her ITMs. She portrays herself as so “woke.” Leah thinks that her issues with Ramona are insignificant when you have race issues. She realizes that her little storyline has been trumped by the current issues at hand. Leah is now going to interject her nasty self into the more important story so she can remain relevant. Leah is literally ruining this season and it is making me so upset since I love RHONY.

Heather tries to talk to Luann about trying to bridge the gap with Eboni. Luann wants to fix the situation and isn’t comfortable knowing she has hurt someone. AGAIN, I don’t think Luann had any ill intent — she literally has cabaret music playing in her head on loop and she isn’t thinking of social issues.

Eboni and Luann decide to sit down and talk it out. She shares that calling a Black woman “angry” triggers her and she found it hurtful… which is very understandable. Luann tries to say that calling her angry wasn’t anything that she said to hurt her or stereotype her. She wants an apology from Eboni since she insinuated that she was uneducated. Eboni resents how Leah got a pass acting like a total jacka*s. I agree with Eboni on this point. Let’s just vote Leah off of the island! Crisis adverted and problem solved!

Luann wasn’t trying to belittle Eboni by calling her angry. She didn’t understand that historically Black women weren’t allowed to show emotions without being called aggressive. Eboni doesn’t want to apologize for her reaction to the label of angry. She will admit that she did yell and raise her voice but won’t apologize for being triggered by the word angry.

In her ITM, Sonja really has amazing clarity explaining the situation. She understands that we need to learn as privileged white women that our experiences are different from Black women. Sonja must be taking her medication since she has actually been making some sense in this episode.

In her ITM, Leah wears a pink top and her Flocks of Seagulls-style swooped over hair, and she looks ridiculous. She actually thinks that Heather left this show since she couldn’t bond with the other ladies. Leah wants Heather to shut her mouth and learn to listen. Oh, dear Leah, that is what we want YOU to do!

Eboni decides to not eat with the group and order some comfort food. She is going to allow herself a minute to calm herself down and enjoy some good junk food.

Eboni tries to build up Sonja by saying her friends undervalue her. She wants Sonja to know she is bada*s and wants to empower her. Sonja does refer to the Black community as “our Black people,” and I see Eboni literally cringe at that comment. Eboni is going to let that one pass for now.

Eboni and Leah are talking, and Heather walks in and tells Eboni how articulate she is. Eboni thinks that was a microaggression.

Eboni calls her friend Devyn to try to find her “dear friend Sonja” a good match. When did they become best buds?

Ramona is planning a day of fishing and lunch at the beach. Leah looks like a total clown with three pairs of pants on. She looks like she just went to the Gap and layered a bunch of clothes on in the dressing room so she could shoplift them.

Luann planned a ’70s beauty pageant-themed Halloween party for the last night. Luann and Eboni both have a beauty pageant past and she is hopeful that they can bond over that.

The ladies meet up with the fisherman Mark. Luann and Leah decide to sit this one out. They decide to have a hula hoop contest. Sonja really wants to catch the fisherman’s d*ck. She is attached to Mark’s hip since she is attracted to men with a dad bod.

Luann gets teary-eyed when she tells Eboni that she is truly sorry that she hurt her. Eboni thinks that they both can learn to be better communicators. I agree, ladies, the two of you were having parallel monologues where NEITHER was truly listening to the other.

The ladies decide to have their picnic lunch. Eboni wants Sonja to know that she has a matchmaker for her. Sonja is perplexed since she can bag a d*ck anytime she wants it. Luann wants to have a talent contest that evening. Ramona is going to be an exercising beauty queen. Sonja is going to be a mime. Eboni is going to do spoken word, and Heather is going to do some cheerleading routine. Leah is going to hula hoop for her supposed talent.

Eboni invites the ladies to an election-watching party. Leah announces that she is dissatisfied with both choices and she will reluctantly default to Biden. Heather wants to weigh in and Leah is shutting her down. Leah doesn’t want Heather’s self-righteous input. She sees her input as being morally superior.

Back at Ramona’s house, Leah keeps bursting into tears over her grandma while getting her makeup done. She CLAIMS if her grandma was responsive, she would rush out the door. I find it really insensitive that she wants everyone to give her a pass for her behavior, but I haven’t seen her acknowledge Eboni, who is losing a grandma as well. Leah is the worst kind of friend to have. She just takes and takes and manipulates every situation to suit her.

Leah’s mom calls and she tells her that her grandma is suffering. Eboni, who looks ’70s fabulous, is consoling Leah since that is what a real friend does. Leah is going to leave in the morning to go visit her grandma.

Heather tells Sonja that Leah has been really rude to her. Sonja is remaining mum on this one. She doesn’t want the Leah-a-saurus to come after her next.

Leah tells Eboni that she hates that Heather is the authority on everything. Eboni makes things worse by sharing that Heather was concerned about Leah not voting in the election. She totally glosses over how she is concerned about the same thing herself!  Leah decides to confront Heather over what she said to Eboni and totally ignores that Eboni felt the same way.

Leah is now yelling at Heather over the balcony. She calls Heather a “Karen.” Leah obviously doesn’t know what a Karen is. Heather thinks that Leah sounds like a dingbat. Leah calls Heather “White Feminism 101.” I love when Heather tells Leah she doesn’t understand what she is saying.

Leah doesn’t want to be near Heather in the limo and she acts like a total jerk-off to her. She throws flowers at her in the van. The anger that she has just doesn’t compute. Leah thought Heather was trying to take her crown literally and she does anything to shift the attention. YIKES, we now have a to-be-continued…

Next week, Leah leaves the Hamptons and Heather tries to talk it out with the group. Eboni has her election-watching party so that should be interesting! Take care, everyone, and see you next week!