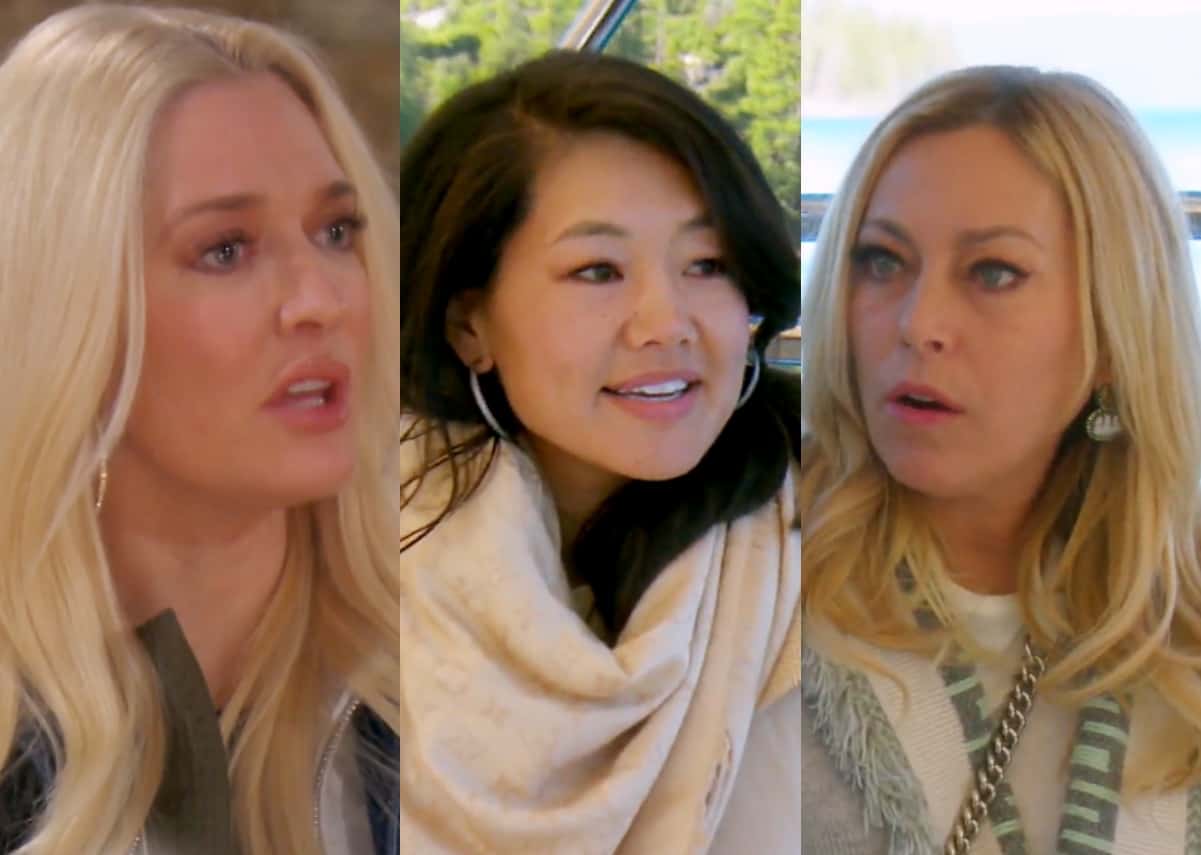 Sutton and Crystal take one step forward only to take two steps back. Can those two ever just agree to disagree? On this episode of the Real Housewives of Beverly Hills, we learn that emotions are powerful, and that, according to Erika, “Nothing is what it seems in life and you don’t know everything about anyone and that’s really the truth.”

The morning after the infamous “bottoms up” incident, Erika wants to know how Crystal is feeling about being in the hot seat with Sutton. Garcelle reminds the women that Sutton has a lot going on in her life, but she admits it is not an excuse to lash out at Crystal. During breakfast, Rinna goes to check in on Sutton. Sutton shares that she is a “little angry” about what went down the night before, thus igniting her paranoia. Rinna claims she doesn’t want any of the women to feel alone and that it’s okay to cry.

Sutton seems to be spiraling. She is keeping a list of the names the ladies have called her on this trip and is feverishly using her face roller to stop crying. The lady needs to get a hold of her emotions and try to think with a clear mind. Otherwise, things will never get cleared up between her and Crystal.

Crystal and Garcelle have decided to escape the craziness of the house and grab a cup of coffee in town. Crystal explains the race conversation she had with Sutton and how it was the catalyst for the current status of their relationship. Garcelle agrees that Sutton was out of line when she said everyone was equal regardless of their color, but Sutton doesn’t see it that way. She refuses to apologize to Crystal (“Why do I have to apologize? For what? What am I sorry for?”), and she holds back her tears.

Once back at the house, the ladies get ready for the afternoon boat ride. Hilarious how Kathy turns to Kyle for fashion advice on her look. Sisters! The women board the boat and prepare for what they hope will be a fun trip. Erika shares that her husband, Tom, has dedicated his life to being a lawyer and she explains how much he loves it (the foreshadowing is kiiiiiilling me), and Sutton sits with a puss on while the rest of the ladies soak up the beauty of the water.

When Erika calls Sutton out for being miserable, Sutton claims that she is okay and that she is just being quiet. Sutton states that she has her tail between her legs, and although she’s nervous, she decides to have a conversation with Crystal. Crystal simply okays Sutton to death, because how can one really take a person who self-soothes with a face roller seriously?

Crystal reminds Sutton that she has, “Showed me nothing but that you are an untrustworthy person. It feels kind of manic.” Crystal further tells Sutton that she cannot deal with crazy people, and you guessed it, Sutton takes offense. It does not help that Sutton and Crystal have polar opposite personalities. I am getting some serious “let the mouse go” vibes here with Sutton…

Sutton admits that she is difficult to get to know because she is shy. She tells Crystal that it takes her a while to warm up to people and states that she was going to leave because she feels so uncomfortable due to the current situation. Sutton blames her erratic behavior on leaving her forever home, and then suddenly, the face roller can’t hold back the tears anymore. Sutton apologizes for projecting her emotions on Crystal, and although Crystal accepts the apology, it does not seem very genuine.

The women return home to baked goods from the private chef and I am surprised to see them all stuff their faces. As the afternoon turns into evening, it’s dinner time and the women are decked. I mean, Dorit even has her PURSE for dinner in the house. Speaking of Dorit, ya’ll KNOW she had a nose job, right??? I mean, that before and after pic Bravo whipped out was classic. Hello, 1995!

Crystal texts that she won’t be joining the women for dinner… which is a bit curious considering she essentially made good with Sutton earlier in the day. When Sutton hears the women discussing this, she admits that she was a bit “strange” the night before and wants to apologize for her behavior. She states that she has had a “meditative day” and the group is understanding and accepting, especially after realizing Sutton has left her Barbie dream home.

Rinna talks about the importance of having friendships with women and how she values each one of them as a friend.  She looks Garcelle right in the eyes and admits that even though she has been called a bad friend in the past, there was a reason behind her behavior.

Rinna then goes into a seemingly unrelated, horrible story about one of Harry Hamlin’s friends. She nurses the story to add to the effect and shares that this friend raped a woman and was sent to jail. Harry Hamlin has since cut off the friendship and support of this person. Rinna tries to link the two stories by stating that, like Harry, she couldn’t blindly support Denise… but really, this story is no comparison. Rinna cannot actually be comparing Denise to a rapist. Also, how did they even get back on this topic?! Am I the only one wishing the Denise stuff was left in last season?

Erika jumps to Rinna’s defense and lets Garcelle know that Rinna actually knows a lot more about the Denise situation than she has shared. To this, Rinna calls herself a steel trap (EL OH EL), and Garcelle makes a good point and suggests that sometimes it’s better just to say nothing. Rinna claims that she was “trying to reach” Denise, but she did not do it the right way. That may be the only thing Garcelle can agree with Rinna on.

Post dinner, the women lounge, drink, and play. Erika says weird things that allude to the future of her relationship, and no one wants to join Rinna in the pool because she is annoying. Eventually, Sutton hops in with Rinna because she is clearly trying to redeem herself, and while some of the group plays Jenga, Sutton and Rinna “perform” a synchronized swim dance. WTF is happening here?? And to think Crystal missed out on this!

Near bedtime, Crystal debuts and shares with Kyle why she was overwhelmed/skipped out on dinner. Evidently, when Sutton walked into her room the night before to bring Crystal her coat, Crystal was naked. Crystal felt awkward and claimed she was too tired to deal. Kyle can’t really fathom why Crystal didn’t bring that up with Sutton during their talk earlier in the day. Although a bit violating, Crystal chose not to rock the boat with Sutton any more than she already did, especially after they have just sort of smoothed things over.

Luckily, the trip is wrapping up and everyone is prepping to head back home in the morning. Of course, Sutton wants to end on a good note with Crystal. Crystal reminds Sutton that when she walked in on her naked, she found Sutton’s behavior “creepy and weird.” She can’t understand why Sutton didn’t immediately turn to leave or why Sutton joked about what Crystal was doing naked and alone.

Although Crystal claims it’s not a big deal, she cries through her explanation to Sutton. Sutton does a good job of trying to make things better with Crystal… I mean, she almost overcompensates, but at least she is trying to be less psycho. A bit ironic that Crystal is now having the meltdown, huh? Bet she wishes she never called Sutton manic…

Four days later, the sh*t hits the fan. Not only is it election day, but Erika drops a bombshell. She sends a text to the ladies telling them all she is going to be filing for divorce from Tom. No one can believe that after 22 years the couple is splitting. It is knocking the busybodies for a loop — how could they not know???

But just wait until the WHOLE truth comes out about Tom… (Side note, did Sutton get *the* text? We all know how she feels about being left out of things…) 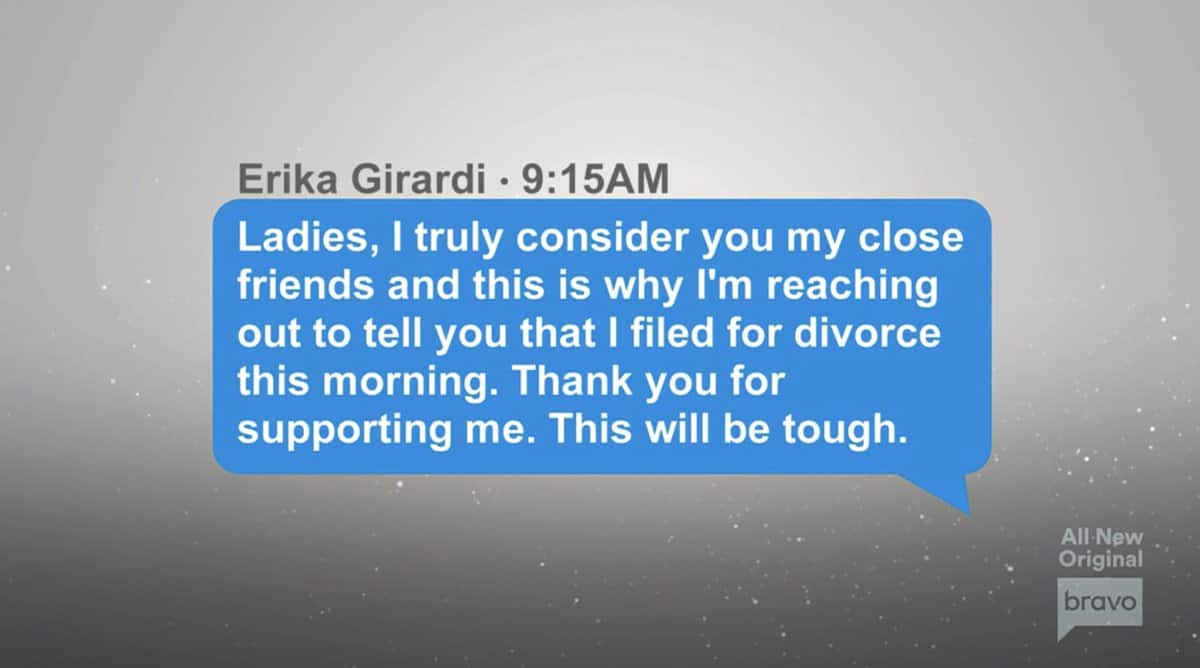 Madison LeCroy Discusess A-Rod and J-Lo Split and Jokingly Takes Credit for “Bennifer,” Reveals How She Met Boyfriend, and Teases A-Rod Drama on ...