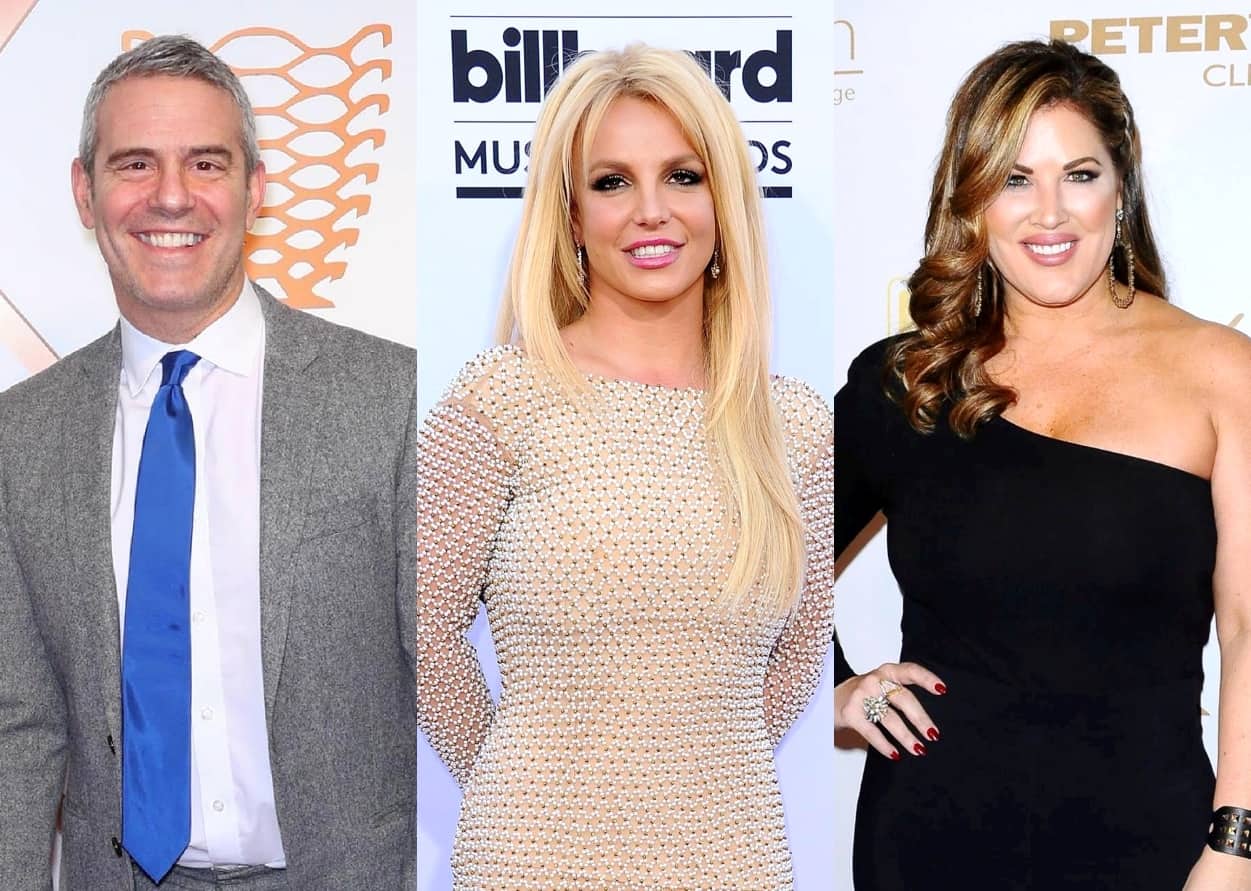 The Bravo world is up in arms over the ongoing controversy surrounding Britney Spears and the mortifying conservatorship she’s been living under for the past 13 years.

After Britney broke her silence about the shockingly strict rules she’s been living under, many of which sound flat-out inhumane, a number of Bravolebrities, including Andy Cohen, Caroline Manzo, and Lisa Rinna, spoke out in support of the singer.

“How about we all start listening to Britney Spears. Britney Spears is not a girl. She is a woman,” Andy declared on the June 23 episode of Watch What Happens Live as he named Britney’s father, Jamie Spears, who is in control of her estate, as his “Jackhole of the Day.”

“She certainly deserves a hell of a lot more than a low-rent mommy dearest in a boxy suit,” he continued. “Britney, after the courage you showed today, you are 100 percent stronger than yesterday. And Jamie, if you want to make money in the future, I suggest you better work, b-tch!”

Also on Andy’s late-night show, The Real Housewives of Beverly Hills star Kathy Hilton and her daughter, Nicky Hilton, weighed in on the situation.

“[She’s] such a sweet girl, and a good girl,” Kathy said on the WWHL: After Show.

“You should know we believe her,” Nicky added. “Free Britney!”

Meanwhile, on Instagram, Real Housewives of Orange County star Emily Simpson, an attorney, shared several messages in regard to the legal drama on her Story.

“I read the entire transcript of her statement to the judge. I have many questions. First of all, it doesn’t sound like she had independent representation helping her prepare her statement. Why is she not represented by her own independent counsel? And why does she not know that she can petition the court to end her conservatorship?!” she asked.

“It’s extremely sad that this woman has no one to truly advocate for her and her best interests. She clearly doesn’t understand her basic legal and fundamental rights as a human and she’s tormented, bullied, traumatized into submission,” Emily continued. “The right to marry and have children are constitutionally protected ‘fundamental rights’ so it’s concerning to me that these rights have been denied her for years.” 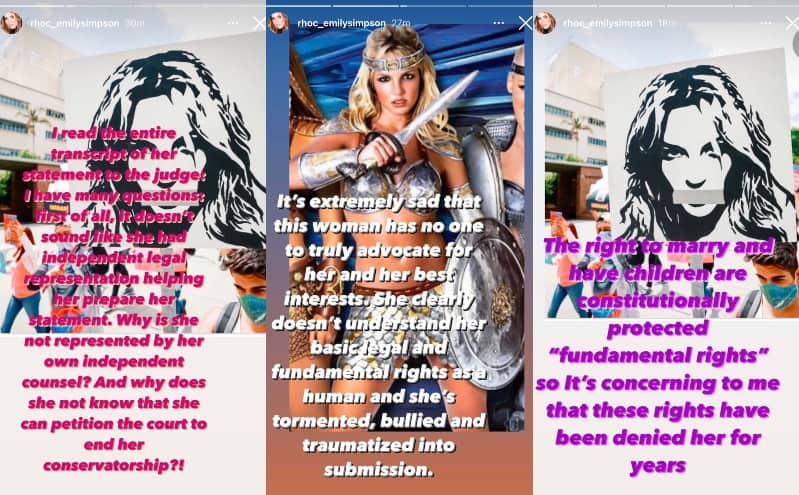 Caroline Manzo, of The Real Housewives of New Jersey, told her fans and followers, “This is a tragedy and she should be heard.” She also included several quotes from Britney’s statement.

Meredith Marks, of The Real Housewives of Salt Lake City, posted a similar comment on her Story. 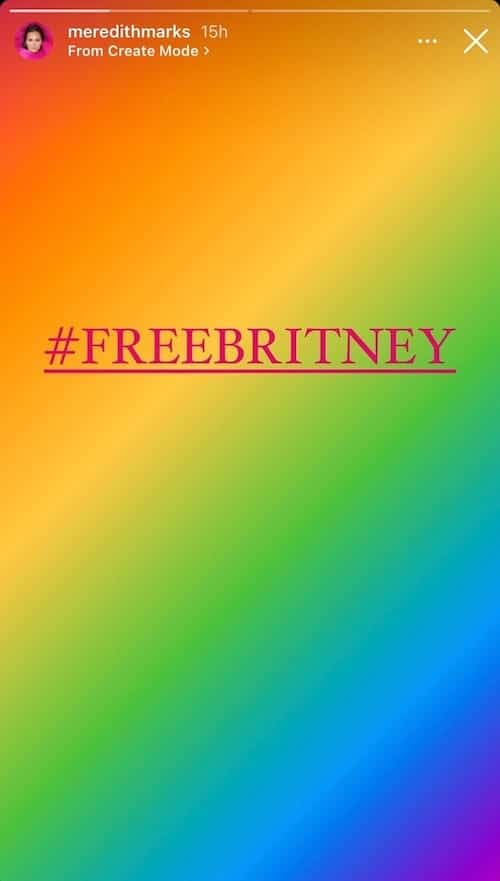 The Real Housewives of New York City star Leah McSweeney spotlighted Britney’s claims regarding her inability to have her IUD removed and encouraged her to sue her rulers.

“FREE BRITNEY ALL DAY EVERY DAY!!!!! They won’t let her take her IUD out WTF. So glad she is speaking up. Let her live her life. Sue the sh-t out of all of them @britneyspears #freebritney,” she wrote.

“We hear you @britneyspears !!! We love you. Stay Strong *FREEBRITNEY,” Heather Gay, of RHOSLC, wrote in the caption of a photo of herself in a Britney Spears T-shirt.

Heather also shared a series of posts on her Instagram Story, one of which featured Britney discussing her conservatorship, and another of which featured a quote from the musician, who accused Jamie and those working alongside him of exploiting her life. 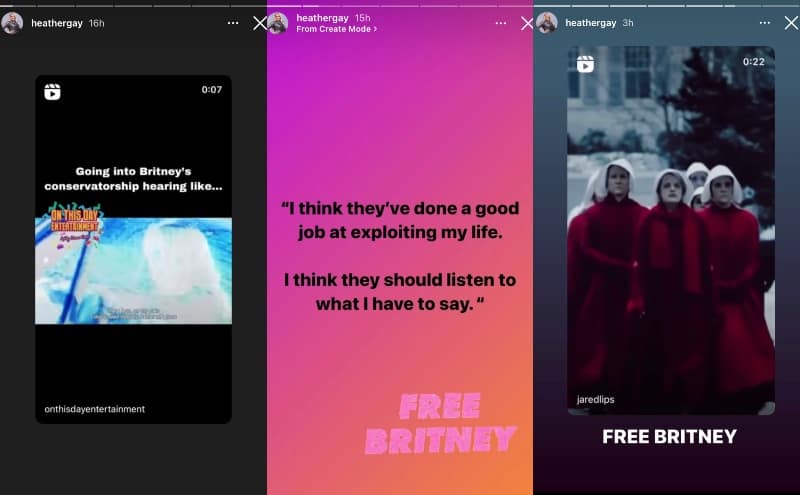