Home Recaps RHOP Recap: Mia Admits She Was a Stripper as ‘Zen Wen’ Continues to Feud With Her; Karen and Candiace Attempt to Mend Their Friendship

RHOP Recap: Mia Admits She Was a Stripper as ‘Zen Wen’ Continues to Feud With Her; Karen and Candiace Attempt to Mend Their Friendship 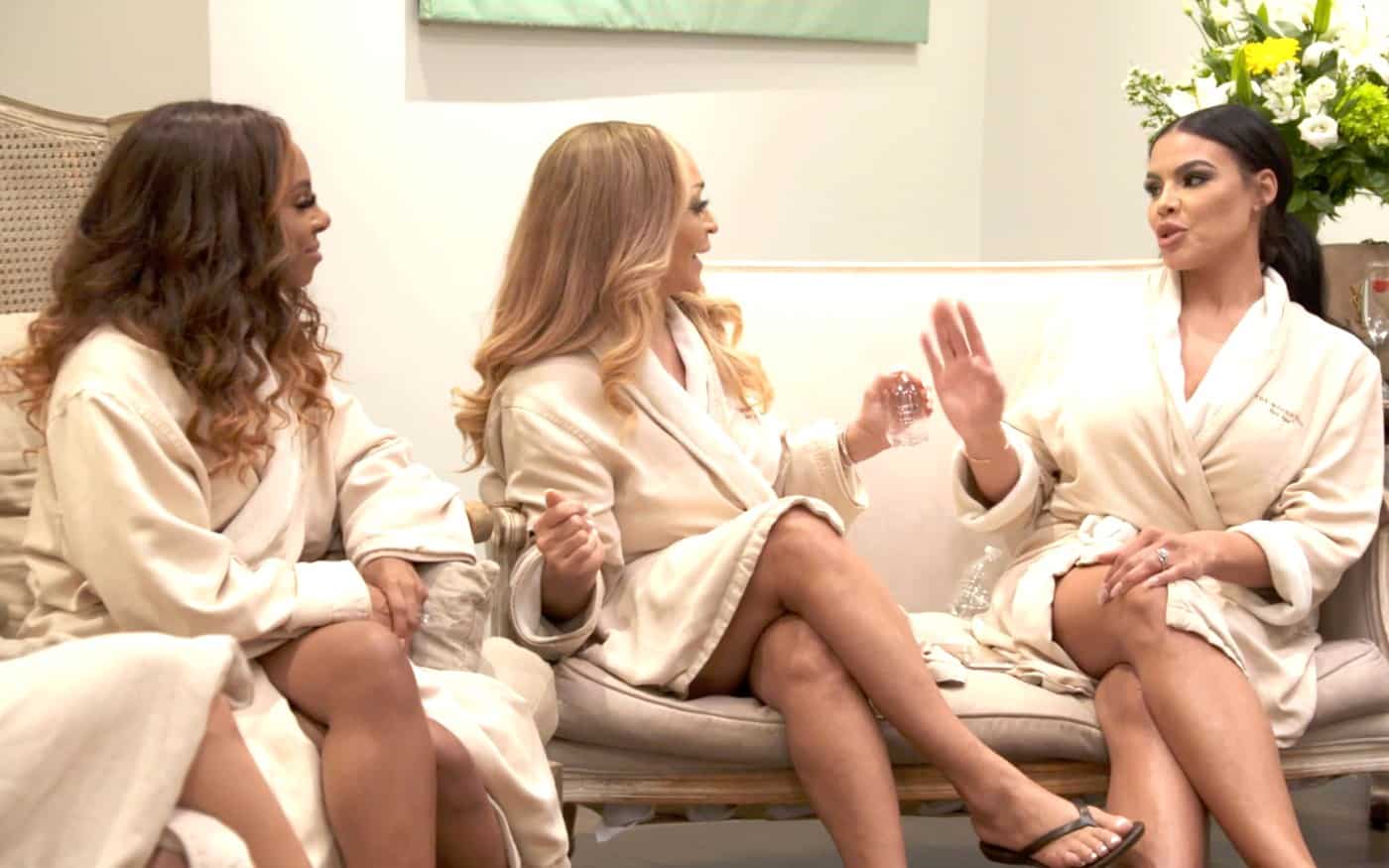 This week on the Real Housewives of Potomac, we will meet the lovely Askale, and Ashley will get some extra pampering. Let’s sit back, relax, and enjoy this relatively tame episode, shall we?

Robyn is showing how she is being a total lazy bone and there is definitely some sort of depression going on. We all know how dreadful the pandemic was, especially for those who had children, but I am not quite sure that is all that is going on here. Robyn doesn’t even want to get out of bed to get the boys up for virtual school? She reluctantly gets up and wakes up one son. Robyn then goes back to bed, which further irritates Juan, who sees this behavior as being lazy.

Robyn is still blindsided by the pandemic and she is burnt out. She lacks motivation and can’t properly take care of the boys. Robyn can adeptly order some Chick-fil-A much to Juan’s chagrin. Juan wants Robyn to do better, and he seems really disgusted with her right now and is over her excuses. It is pretty bad that the teacher has to tell Carter to have their mom wake them up.

Ray is helping Karen set up her La’ Dame Zoom meeting with her “customers.” He is giving Karen some moral support and learning how to give his queen proper lighting. Karen LOVES having Ray’s support to build her “Beauty Empire.” She now has a glue-less wig line and has named them Kim and Queen. Ray is feeling the Queen look, and he is treating his lady like the queen she is.

Ashley and Gizelle are meeting up for some breakfast. She is excited to get some good comfort food and she looks like she is going to pop. Gizelle has to bring up that she is concerned about Michael’s fidelity. She knows a lot about men who cheat and totally misrepresent what their relationship is to others. Ashley is still concerned, but she thinks since Michael is so good with Dean he will do the right thing. My personal advice would be to install some nanny cams to watch Michael, the nanny, and Baby Dean.

Ashley tells Gizelle the story about Mia having clitoral surgery despite having no vaginal births. She has concluded that “Mia’s sheets must have been flapping in the wind.” Ashley then spills to Gizelle that Mia is concerned about what she said about wishing Ray dead. Gizelle doesn’t want any part of that conversation. She then dives right into inviting Ashley to a “pamper party,”  but there will NOT be an invite to our Grande Dame. Ashley asks for her to reconsider Karen and Gizelle very reluctantly relents.

We then meet Askale Davis, who is allegedly Robyn’s friend at her mom’s warehouse. Robyn claims that Embellished has taken off and she is behind on orders. Who is buying this stuff and how can she get anything done when she sleeps till noon? Wendy joins them and tells Robyn that she wants to start a home essential line. Robyn wants to know how she went from a professor to a candlemaker. I guess all of her side-gigs aren’t very lucrative are they?

We now have dueling conversations at different locations about Wendy and Mia’s interpretation of events. Mia gets an invite from Gizelle to Ashley’s party, and she tells Gordon what happened at the party. She thinks that Eddie is p*ssy whipped by Wendy. Mia thinks that Eddie needs to be freed from Wendy’s claws. Wendy thinks that Mia should consider herself lucky that she didn’t pop off.

Candiace thinks that she is getting some experience being a bonus mom by coexisting with kids. She thinks living under the same roof with them makes her mama material. Candiace, there is so much more involved than that.

Candiace and Chris, in his lavender tracksuit, are talking about the full bar they have and how Dorothy wouldn’t approve. Dorothy then very conveniently calls during this conversation and catches Chris day drinking. Candiace tells her mom that she will be seeing Karen but she is wary. She tells Dorothy about Chris managing her music career, and she isn’t too optimistic. Neither are we. Dorothy thinks that Chris is trying to take Candiace’s money and wants to control her life. She thinks he is going to not have a job outside of working for Candiace. Yep, that is some truth there.

Wendy visits Karen, and they seem to be much more friendly than last season. She wants Karen to teach her about the business world. Wendy wants to be the Black Martha Stewart, but she doesn’t have a business plan or sufficient cash for this endeavor. Karen has some good advice on what she needs to do for marketing and how she needs to differentiate her product from others. Wendy is obviously ill-prepared for this undertaking and will need another cash infusion from Eddie.

Mia and Gordon talk about her dysfunctional upbringing. Her mom had a drug problem, which resulted in Mia being put in foster care. Mia tells a sad story about being deserted by her mom at the age of six. She has a nonexistent relationship with her mom. Mia can’t seem to get past that her mom gave up on her family. I personally like that Mia is sharing this part of her life with us. Gordon is being very supportive of Mia and I am liking him — so far.

Karen has arrived at Candiace’s new home. She is impressed with her new home and finds it to be a happy abode. Candiace thinks they can move forward, but in which direction will their friendship be heading? Karen acknowledges that she upset Candiace by remaining neutral. She thought the other ladies — specifically the green-eyed bandits — iced her out . Karen doesn’t want anyone taking cash from her purse and doesn’t have a Dorothy to provide extra cash when needed.

Candiace pulls out her triangle of tissue when Karen won’t change how she reacted to the situation. She doesn’t trust Karen because she won’t apologize for not supporting her. Candiace is resolved to keeping it cute. Karen really needs to be her friend and tell her to get rid of that horrific eye makeup in her ITM. Candiace must not have any real friends since who would tell her that ITM look is a good one?

We now have arrived at the sunshine-themed Pamper Ashley party at the spa. Candiace is willing to behave herself since Ashley is with child — for now. Wendy is wearing her new boobies out and proud and shakes her moneymakers on demand. She has more in common with Mia than she thinks! Askale joins the party and brings a bottle of champagne. Our Grande Dame arrives and it is insanely awkward with Gizelle’s lips in full pucker.

Mia strides confidently into the room, and Dr. Wendy is side-eyeing the younger version. How funny is all of the side-eyeing going on? They play a game showing pictures of the ladies’ bellies when they were pregnant and they have to identify the mama. Wendy, of course, has contributed a picture where she is in full glam pregnant with her daughter. Candiace, who can’t miss an opportunity to shine, even throws in a picture, but she is only pregnant with possibilities.

Wendy and Mia very passive-aggressively chat about the tiff they had. She doesn’t want anyone’s hand in her face and she won’t tolerate a flip-flopper. Zen Wen isn’t so Zen right now. She is allowing Mia to get under her skin. Tick-tock and Wendy has time today to put the newbie in her place. Mia, you are summarily dismissed by our housewife Rhode Scholar. Wendy can now understand why she needed her clit rebuilt. These two powerful divas are still going at it in real-time so they obviously haven’t resolved their issues.

Wendy can’t believe Gizelle and Robyn aren’t backing her up. Is Wendy naïve to believe that the bandits would be loyal to anyone? Darling Wendy, you are so much smarter than that!

Candiace thinks that Wendy needs to slow down since she may pop a titty. We then get into what is probably going to be another storyline about Karen’s drinking. Side note: I personally would love the Grande Dame to call me when she is trashed and spill all of the Potomac secrets. Wouldn’t you?

Mia tells the truth about how she starting bartending, but there was no pole action. She claims that the ladies wore long gowns. This was a gentleman’s club where the men didn’t want them to take off their clothes? NOBODY IS BUYING THIS! Karen is going to hit up Mia for some pole action skills. Ashley correctly thinks you have to flaunt your money maker(s) in order to thrive in a club like that. She didn’t score Gordon with just her conversational skills. They now decide to take it down a notch and say a prayer for a healthy delivery for Ashley. Now, that is a great way to pamper the pregnant mama instead of all of the in-fighting for the HBIC crown!

Next week, Mia is torn between the friend groups, and Ashley’s water breaks. Have a fabulous week everyone!