Home Real Housewives of New York City News RHONY Recap: Sonja Accused of Lying About Tryst With Dylan as Luann Opens Up About Split From Garth, Plus Eboni Gets Her DNA Results

RHONY Recap: Sonja Accused of Lying About Tryst With Dylan as Luann Opens Up About Split From Garth, Plus Eboni Gets Her DNA Results 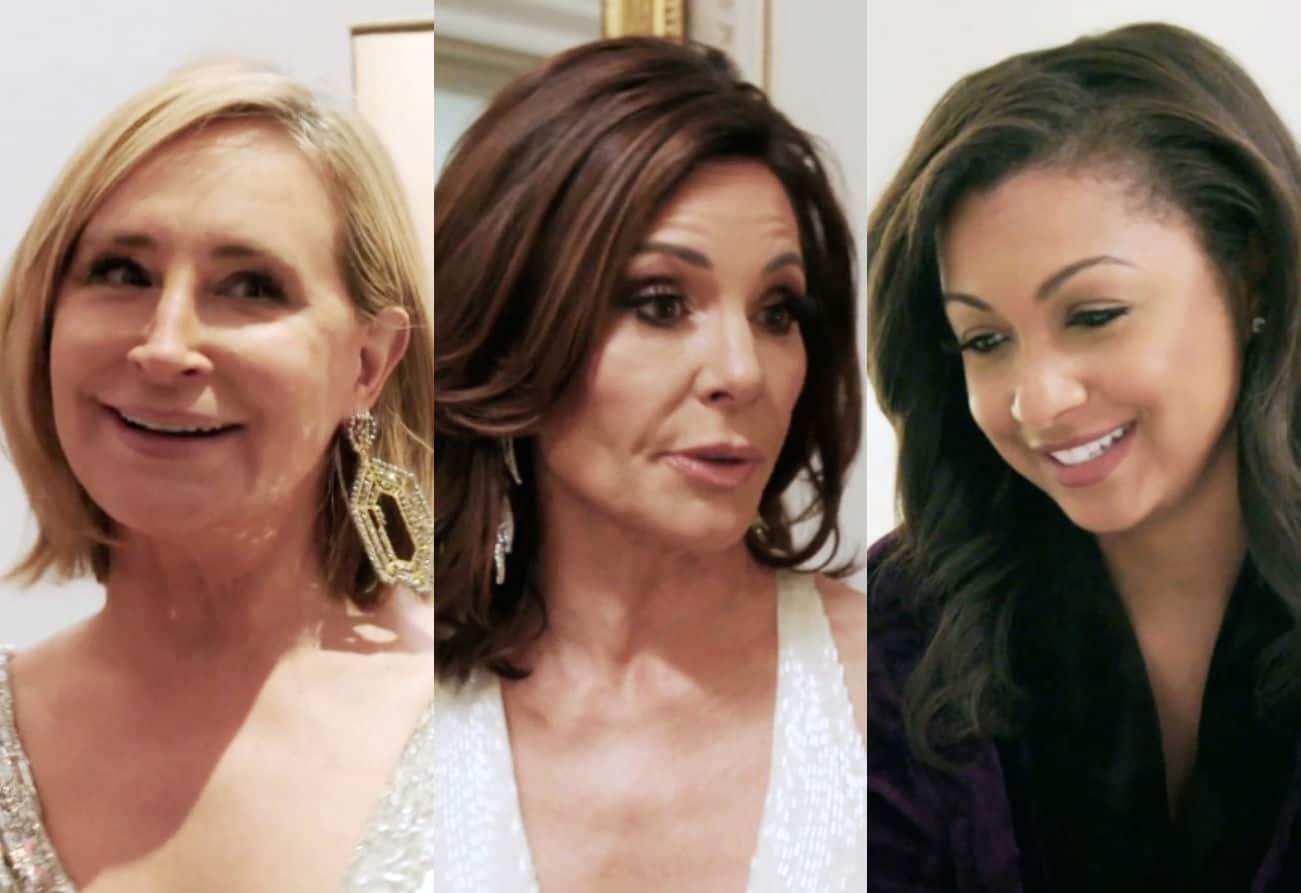 The Real Housewives of New York City  have gifted us this week with an episode titled “Ho-Ho Holidays!” Let’s see what presents are to be unwrapped and what silly nonsense they can get into, shall we?

This episode is rather tame in the Housewives’ universe, but we get glimpses of how beautiful NYC is during the holidays. Luann tries hard to get everyone in the holiday spirit with her music video, and Eboni continues her search for her siblings.

Sonja, aka the meat magnet, and Luann meet up for dinner. She couldn’t resist herself and allegedly rode the handsome Dylan. Sonja can barely walk again from all the pounding she was subjected to. Ramona arrives and hears about Dylan sampling Sonja’s sloppy millions.

Sonja then spills Eboni’s secret that her Jewish boyfriend kicked her to the curb since she wasn’t Jewish. This guy doesn’t want a relationship with her even if she converts to Judaism. Ramona thinks that Eboni’s guy betrayed her. I think this sounds really sketchy since this guy knew from the beginning Eboni wasn’t Jewish, but he decided to dump her so randomly now? Sonja must have missed an integral part of this story since it doesn’t pass the smell test.

Luann is feeling her groove in this episode. You can see our Countess just lighting up with all the excitement to get another chance to perform. Luann lives for the adulation that she gets from her cabaret shows and it is literally her lifeblood.

Since they keep mentioning Sarah, she arrives just like Beetlejuice! Leah tells her she looks good, and she credits it to puking. She mentions how their mom thinks she looks like Fidel Castro in her army green jumpsuit. Sarah thinks she could be pregnant? My biggest fear has happened in RHONY — they are reproducing!

Leah tells Sarah and Daniel about her new storyline involving spiritual awakening to save her sorry a*s rabbi. She sounds kind of lecherous describing him to her brother. Leah really likes the rabbi since he is the spiritual version of her. Daniel can see Leah being like Carmela from The Sopranos and ravaging her rabbi. I think I am just like Bunny; Daniel is my favorite child of this family, too!

Sonja talks about the safety measures that she has implemented in her home. She has her healer Aleta coming over to “chakras out her daddy issues.” WTF is Sonja wearing in her ITM! She looks like a combination of a Holly Hobbie doll infused with Dr. Quinn the medicine woman! Sonja was made to feel not good enough, and the men in her life abandoned her. Sonja remembers her stepdad showing favoritism for his kids and excluding her.

Eboni has finally received the DNA test results. She is anxious to find out if Ashley is her sibling or not. Eboni calls Ashley and tells her that they are not biological siblings. Ashley gets emotional hearing they aren’t related. I was really hoping that Ashley was her sibling since she seemed like a nice person. Well, Eboni, keep on swabbing and find your long-lost family!

Sonja has Gaurav over to discuss the Century 21 deal. Darling delusional Sonja, when a company that sold your clothes goes out of business, you are done. Sonja wants to see the books since she thinks that she has been shortchanged. My concern is can Sonja even decipher what is in those books if she does receive them? Gaurav mentions they will be reaching the Martha Stewart level. What I want to know is what is this man on? I want it so I can live in this insane fantasy world they are in right now!

Sonja has Ramona come over to give some moral support. Gaurav gets a little agitated when Ramona starts giving out business advice. He basically tells her if she can do a better job managing this dodo-bird Sonja to feel free to try. Ramona wants to help her get her payday. She is trying to find out where her money is. Ramona doesn’t know the costs involved in website design and the marketing involved when Gaurav questions her knowledge.

Mystery solved! Sonja has a $10,000 check that hasn’t been cashed yet. Gaurav shows them the company revenues. Gaurav shows the proceeds were $82k, and $60k went to lawyers. This is a total sh*tshow, and Sonja is a freaking clown. Why would Sonja throw away a $2,000 check?

LOVE the Christmas decorations! Luann is getting ready to do her holiday music video. She feels like she is Judy Garland and is beside herself with happiness.

Leah picks up Eboni at her building. She is fortunate this time to have a Jovani dress and not be required to wear sweats from the bottom of Sonja’s dirty clothes hamper. Eboni shares with Leah that Ashley isn’t her biological sister. She is going to utilize a geneticist to find out who her dad is.

Luann is filming her music video and is literally walking on air right now. Ramona arrives like a whirling dervish dancing around and already spilling her champagne. Luann looks amazing in her white sparkly gown, and I have got to hand it to her — she looks radiant. She is having trouble getting her cue, though, to enter the room. Ramona decides that she could be the video director and takes over. She loves getting the role of the director and the chance to prance and preen in her gold gown. She doesn’t do the prancing too well since she tends to walk like she has a corncob up her butt, though.

Luann is trying to shoot her video and Leah’s dog runs outside. Leah thinks this is Luann’s dream of heaven where she is a shining star. Eboni looks beautiful and very festive in her red dress. LOL, Ramona cracked me up when she says men don’t want to be in a relationship with her because they end up in the press. I am positive that there is a lot more to do with it than just that. Ramona must be exhausting to date and be around. Can you imagine the monologue that you would have to listen to at dinner with Ramona on each date???

Ramona tells Luann the real story about the previous night. Sonja went back to the hotel with Dylan and his girlfriend. She ended up passed out in his bed, and Lu’s friend Hank had to get her. Sonja was proving that she can still get a young dude, but she ends up looking desperate instead. She was bragging it was the best sex ever! Ramona thinks that Sonja is jealous that Luann had Garth and he wasn’t willing to come to her moldy townhome for a quickie.

Luann knows that Sonja lives vicariously through her. She thinks that Sonja gets her validation from sex and men. Luann wants to change the topic back to her since she is the star here, remember? She wants the ladies to know how much work is involved in being a cabaret star.

Sonja arrives with her silver dress and a white pimp coat. She then gets questioned on what her side of the story with Dylan is. Sonja acts like she didn’t know that Dylan’s girlfriend was in the room.

Eboni thinks Sonja feels like she must sing for her supper and serve as an RH storyteller that shares scandalous stories for everyone. Sonja is truly like the court jester in this group and thinks that she has been appointed the party maker. Side note: I went to Jamaica several times and they had an employee who was called the “party maker.” He was a blast to hang out with and went to great lengths to keep us entertained. Maybe Sonja should investigate that position if Sandals is hiring? Sorry, I digress, just trying to help!

Next week, Sonja meets up with a matchmaker and Eboni has her Black Shabbat dinner. Leah was exposed to the virus and luckily can’t attend. I am wondering as I type this blog will there ever be a reunion filmed this season? Let me know your thoughts on all the current news with Ramona and Eboni breaking bread! Be well, everyone, and see you next week in NYC!