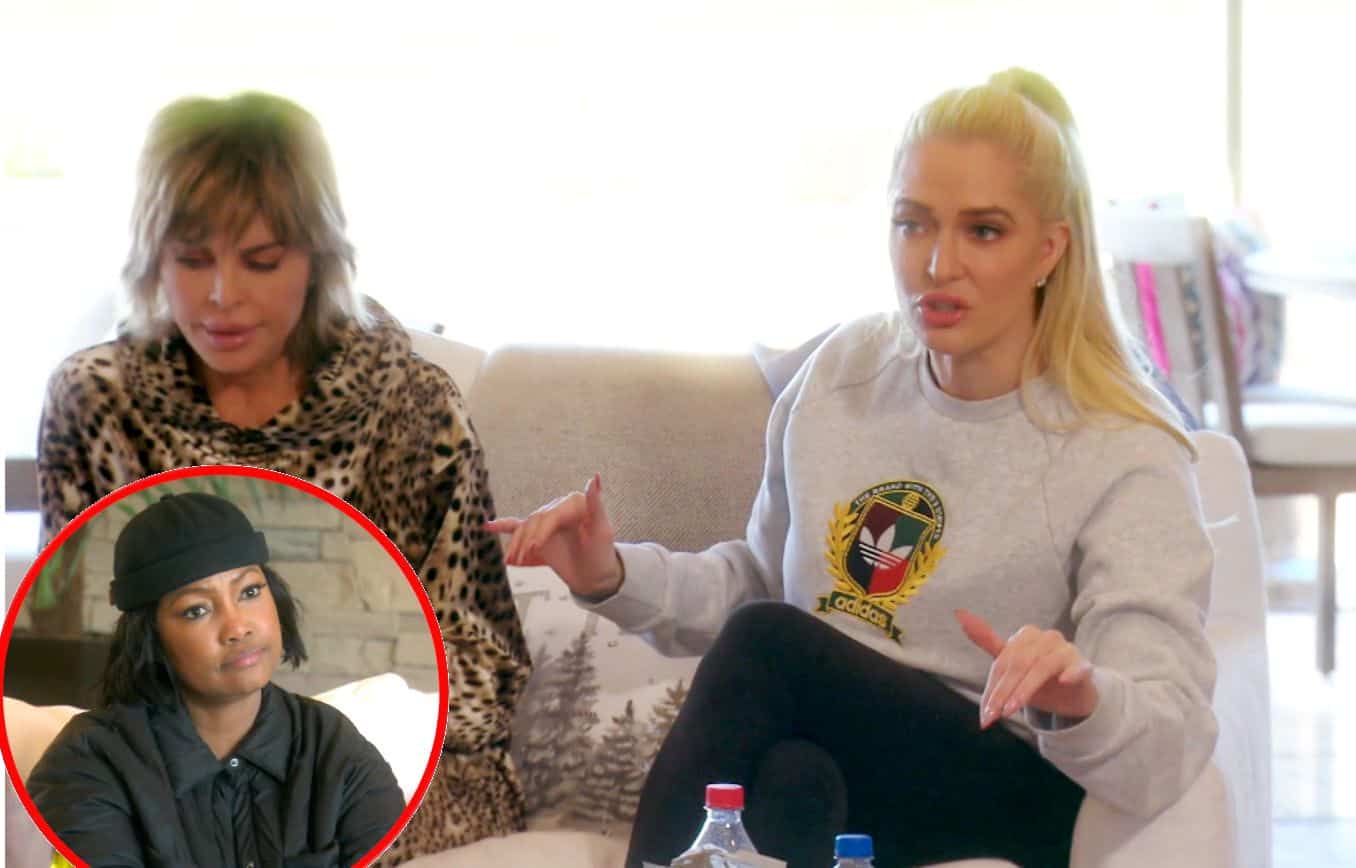 “The divorce. The affairs. How do you process all of this?” That is certainly the question on this episode of Real Housewives of Beverly Hills as Erika continues to open up more and more about her divorce and legal troubles.

It’s the next morning at Kyle‘s La Quinta house and it seems like a frat party took place the night before. The place is an absolute disaster full of dirty dishes and half-eaten food. Apparently, after Erika went back to her hotel, there was a “heavy conversation” about her situation that then led to a dance party — basically, so Kyle could have an excuse to do splits, I am sure.

The women seem to enjoy getting daily updates about the unraveling life of Tom Girardi, and when they hear that he was hospitalized for serious illness, they question if the illness happened in the past or if it’s a present ailment. Seems as if this illness is being used to explain away Tom’s behavior these past few years.

Crystal and Erika make it back to Kyle’s house in the morning after spending the evening in a hotel, and the ladies break into groups for the day’s activities. Rinna, Kyle, Crystal, and Dorit (omg her biker outfit is incredible — those shades are everything) head out on electric bikes while Kathy, Sutton, and Erika hang back.

While having coffee and breakfast, Kathy phones her assistant, er, I mean Kyle, and asks her to bring her back a straw and chia seeds. Talk about a classic big sister/little sister relationship. The women agree that they are straight jealous of Kathy’s lifestyle (hello — she used to LIVE in the Waldorf Astoria!!). But of course, Kyle states that she would rather be self-sufficient, which is just another way of saying that she is also jealous of her sister’s lifestyle.

Before making their way back to the house, Kyle switches the topic to Erika and Tom. Dorit is baffled about why Erika is still trying to protect Tom since he certainly is not going to be looking out for her. They all agree that they think there is no money to get, which is a pretty bleak realization considering the life they once led.

Later, all of the women are reunited and Kathy gets her straw (yet, doesn’t see it and doesn’t use it LOL). Erika reminds the women that Tom has a house in La Quinta actually not far from Kyle’s, yet she has never been in it nor does she know exactly where it is. How do you own a home and not know any of the details about it?! Interesting how, at one point, Erika thought it was cool to have soo many houses that she lost track of them, but now Erika infers that “somebody” has to be in that house (cough cough, Tom’s mistress… or second family??). Don’t worry — Kyle texts the general manager for Tom’s house address because she is ultra-nosey.

Kathy also experiences the life of being too rich to care when she blurts out, “I just remembered we have a house around here.” KATHY! Also, I love how she just dances to the beat of her own drum. She legit wants to finish her shake prior to playing croquet with the ladies — although, I don’t blame her. Who wants to play croquet anyway?!

Kyle has organized this croquet game yet none of the women know how to play/can play. This game lasts about 11 seconds and Kathy finally strolls up as they finish up. They discuss how Garcelle is joining them tonight but will be staying in a hotel because of COVID… or because of Rinna. LOL. The two have made up (kinda), but it’s great to know that Rinna understands the relationship is still on thin ice.

Post croquet, Garcelle comes to Kyle’s house in a full-on hazmat suit. TBH, I don’t blame her: “These b*tches had COVID, I’m not walking in there without being prepared.” Also, how good is it that she comes in like that and then makes a quick exit for the hotel to get ready for dinner?

Because Crystal and Garcelle are staying at the same hotel, Garcelle pays her a visit to get filled in on the deets from last night. Garcelle is baffled by the Erika information she hears and is def gonna get some answers during dinner.

The whole group gathers for dinner in Erika’s “hotel room,” which actually looks bigger than some people’s apartments. Over room service, Erika shares that she learned how to go into a bank in March and claims she never used a debit card. Of course, Kathy doesn’t know how to use a debit machine either. Where do these people come from?

As the topic of Erika’s divorce takes center stage, Kyle lets Erika know that she Googled the address for the La Quinta house and breaks the news that the house was sold. Erika is confused as to how that can happen when she didn’t know about it. Sutton explains that Erika needs a forensics team to find out if there is deep, deep money. Erika sits quietly, stuffing her face, not nodding in agreement. Must be hard to pretend like you don’t know where to look when you know *exactly* where all that money went…#itsexpensivetobeme.

It’s suggested they play a game and come up with one word to describe themselves. This is hilar as Kyle calls herself honest and Crystal can’t even think of a word. Let’s help Crystal out here — how ‘bout violated? It also comes out that Crystal is a descendant of Confucius, and she has the longest family tree in the world. Who knew?!

The next morning, Erika, Crystal, and Garcelle go “hiking”– I use that word loosely because Erika carries a purse and the ladies are decked. Garcelle talks about her family and attempts to remember all six of her siblings’ names, unsuccessfully, and it seems like they are going to really bond during this time.

In the meantime, the rest of the crew is off to shop. Translation: Drink champagne and make fun of Kathy’s outfit. Kathy reminds Kyle she is not at a fashion show, “Who are we trying to impress?” Truth.

The three hikers look like they are about to shoot a cover for a CD as they sit atop a mountain and pontificate about Erika’s future. Erika does a good job of playing dumb and Garcelle really tries to poke holes in her story. Erika APPARENTLY had no debit card, no allowance, so Garcelle is dying to know how Erika funded her lifestyle.

Garcelle asks Erika, “Did you have a heads up? Is that why you got divorced?” Yas Garcelle asking the questions we all need. Erika claims that this divorce was a long time coming, particularly after Tom’s severe head injury three years ago and the decline Tom experienced because of it. Erika tells Garcelle and Crystal about Tom’s rage and frustration and explains that Tom was showing signs of dementia. Erika states, “Part of true brain trauma is making decisions you wouldn’t normally make.”

As they descend down the mountain, Erika whispers that Tom calls her every day. He’s not supposed to be doing that and Erika knows that she cannot be in contact with him. She tells Garcelle and Crystal that he lets her know that he loves her and wants her to come home. I thought she said Tom didn’t care about her… mixed messages much?

Now all together at the house and over some tacos (thanks, Kathy!), the ladies listen for the latest development in Tom’s case. Erika knows that she has to stay mum regarding the details, and during a lull in the conversation, Garcelle blurts out, “Erika shared, if you don’t mind me saying, that Tom calls her.”

Holy can of worms. Erika snaps back, “Well I do mind you saying that because I feel like you’re betraying my friendship.” Not sure that piece of info was Garcelle’s place to share, as it is incredibly tumultuous between lawyers and no-contact orders. But really, Erika JUST talked about it mic’d up and on camera soooo… relax, girl.

Erika becomes next level triggered and Garcelle is perplexed about why that would set Erika off. Erika states, “Sometimes not everything is up for discussion,” and she sobs about being open and honest. She calls Garcelle’s move “dirty,” and Garcelle owns it as she did not mean to upset Erika. When Erika excuses herself, Garcelle becomes upset. Crystal tries to smooth over the situation and lets Garcelle know that Erika actually said she didn’t want to talk about it with the other women. The problem is, Garcelle did not hear Erika say that. Total miscommunication. 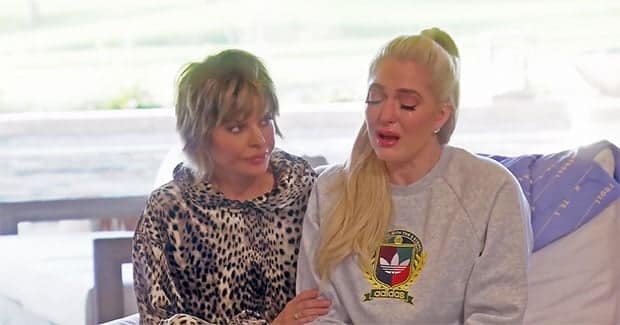 Erika hyperventilates in the bathroom and repeats, “I’m trying to be open and honest,” but I thought Tom never reached out to her since she left him. Damn, it’s gotta be exhausting trying to keep up with all those stories, Erika…