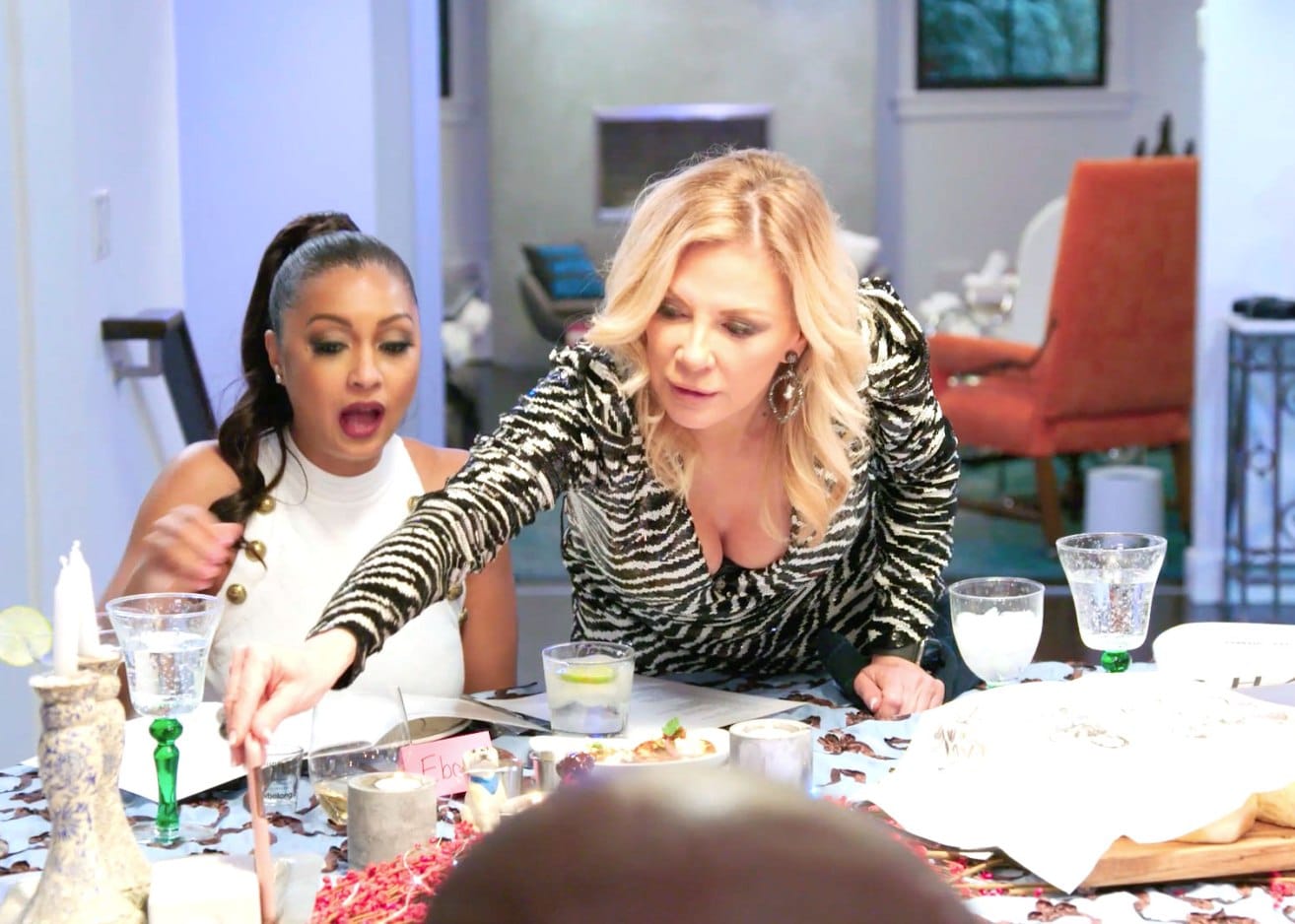 The Real Housewives of New York City are heading this week to the Black Shabbat dinner. Ramona is going to give everyone indigestion before the night is over. Let’s watch and see how it unfolds, shall we?

Hello, Blurbers! First going to address how Leah shared my employment location with her Instagram followers, which led to a man calling my office. He tried to file a complaint against me for cyberbullying, but his attempt was thwarted since he was obviously not credible.

Leah also posted on her Instagram that I was a “nutjob” who writes for “low level sh*t Reality Blurb.” She also called out my employer for not doing their “due diligence” in hiring ME in the first place! Isn’t that ironic how Leah’s storyline has been her bipolar disorder and expected empathy, but she found it acceptable to call me a “nutjob?” Leah has claimed that I was a cyberbully, but who in this case was the aggrieved party? She could have indirectly made me lose my main source of income with her reckless behavior.

I never imagined that a side job blogging could potentially affect my main source of income where I had worked for 34 years. I thought this was important to share with all of you since she portrays herself on the show as such a strong independent woman. Leah has clearly shown that she DOES care what is written and said about her. She will go after anyone, even little old me, over what she sees as an attack. Yes, I write with snark and sarcasm, but I capture what is going on in the episode. Leah has given me so much material to work with and is just like a gift that keeps on giving. She has proven herself to be extremely vindictive, especially to a viewer/blogger who is just trying to honestly make a living and survive in the crazy world we live in. Can you imagine what she does to the other ladies (Ramona firing rumors) behind the scenes?

I want to thank my editor Moni, my fellow writer Ashlee, and all the commenters who came out and so strongly defended and supported me. Eternally grateful to all of you. Okay, now that nasty nonsense is off my chest, let us get on with the episode, shall we?

Leah calls Eboni and they are chatting about the Hebrew language. She is struggling with the pronunciation and the enunciation of the Hebrew language. Leah is also of the belief that bigger is better, so she scored herself a huge mezuzah that demonstrates to her at least that she is all in on converting to Judaism. Eboni is excited that Leah is joining her Shabbat dinner and getting the chance to practice her new religion. But hold that horse, she won’t be going — at least in person — since she was exposed to COVID.

Ramona is collaborating with realtor Michael Lorber. She is rather directionally challenged, and that could be a serious stumbling block when you can’t identify what direction you are looking at. Ramona still doesn’t have her license yet either, so this seems to be another faux storyline. Michael has his client hapless victim Jordan come to view the apartment. Wow, this place is 17.9 million dollars and those views are spectacular, but the lack of square footage is shocking.

Eboni meets with a genetic investigator named Linda Doyle who’s assisting her in finding her biological siblings. She is an only child and wants to make a connection to her family. Eboni shares what happened with Ashley and how she wasn’t a match. She can’t take any more disappointment and has decided to hire someone (or Bravo did) who is more specialized.

Linda, the genetic expert, is going to do a family tree clustering exercise kind of like CeCe Moore (check out her must-see show Genetic Detective) did. CeCe’s work has solved a lot of cold cases. She is using this new science by utilizing family trees and DNA to help Eboni get the answers she so desires. Hopefully, Eboni has hit a home run with Linda and she will have a final resolution.

Sonja is meeting her new match Bradley that Eboni’s friend Devyn set her up with. She didn’t remember much about his photos other than his loafers. Sonja recalled him being taller and fitter, and then her eyes shot down very slowly to his loafers so she could linger on his package. She isn’t drinking on this date which is very wise on her part. They are now bonding over food, and what better way to connect?

Bradley leases retail space and his business closed in March, and he discusses how he has back issues. Did you just hear a screeching tires sound coming from Sonja’s head? Bradley totally grosses Sonja out when he describes his jelly oozing from his spine. Sonja feels like she can be honest with him when she passes gas now, so they have some common ground there — the ability to gross each other out.

Sonja is disappointed that he no longer has a home in France. She is trying to find her groove and admits she might be a little rusty. They part nicely and she hopes to see him again, but when a man won’t stay for dessert you know you might have a problem.

Ramona and Luann chat about the upcoming Shabbat dinner. They both hope that it isn’t another teaching moment for Eboni, but they are going to roll with it. Sonja is of the belief that they are attending a Black Sabbath concert so she will be in for a huge surprise there.

Leah was exposed to someone who has COVID, and she has to self-quarantine for five days. Eboni is concerned that she will be left alone with these b*tches. She tells Leah that she will let her experience it through Zoom. Leah has worked SOOO hard on her conversion and Eboni doesn’t want her to miss out.

Eboni (LOVE her white dress) picks up Luann, Ramona, and Sonja to attend the Shabbat dinner. Our Countess arrives in a Jovani-esque blue dress, and Ramona is wearing zebra print with her tatas hanging out. Sonja has a silvery dress that I recall seeing before since I see tags hanging on it still. Ramona doesn’t think Leah Zooming in will be a wise way to participate in the dinner. Hmm, that statement couldn’t be a truer one!

Luann spies the snow and decides to use this opportunity to throw some snowballs at Sonja and Ramona. It then becomes a full-blown snowball fight. Now, this is the RHONY we all love, these truly spontaneous moments where they belt each other with snowballs while dressed in their finest designer best!

Archie, Eboni’s friend, greets the ladies for the Shabbat dinner. Eboni introduces her other friends Brian, Dionne, and Linara, who, according to her, represent Black excellence.

Ramona is already being Ramona and criticizing Archie’s table setting. She is picking up her homemade napkins and tossing them around. Ramona is trying too hard to be all “Jewish woke.” Sonja thinks Ramona is going down a road where she is going to get herself in trouble. Yep, it is like a car wreck. You just can’t look away.

Sonja is disappointed that Archie is a lady since she already envisioned herself as his new “Betty.” HOLD UP, Eboni thinks that she and Sonja are introverts? Luann hears this and says, “I am a freaking donkey if you are an introvert!” OMG, I just busted out laughing at Lu. Production shows some great examples to dispel that myth of Sonja!

Leah is joining the Black Shabbat dinner on FaceTime. Archie describes why she created her group Jew Belong. Leah gets cut off, so she has to call in and interrupts Archie, again. She is concerned that the gefilte fish is in her line of vision. Leah can’t be heard over Ramona and that is causing a disruption to the dinner. Archie decides to do a Shabbat shot. Leah is still droning on, and I HATE to agree with Ramona, but this distraction is totally inappropriate for a Shabbat dinner.

Ramona finds Leah’s image on the table to be very distracting. Leah reminds me of the disembodied head of a witch trapped in a crystal ball named Madame Leota from the Haunted Mansion in Disney World. Ms. McSweeney gets special treatment and obviously wants some coin to film this scene. Ramona, who is trying to make herself relevant, recalls being hated by Jewish people in college. I am sure THAT wasn’t the only reason she was despised.

Eboni explains the meaning behind Shabbat. It is a time to take a break and a day of rest from work. Leah is singing the prayer in Hebrew and Eboni’s friends are laughing at her or with her. They might be laughing at the absurdity of this whole dinner. Sonja then grabs the phone and gushes to Leah that the prayer was beautiful and she was moved. Luann is secretly jealous that she didn’t brush up on her Hebrew so she could break out into song. She would have started belting out “Li-La-Lo” from the Jewish Cabaret show!

Archie mentions how concerned she became over the relationship between the Black and Jewish communities. Ramona keeps interjecting how Italians and Jewish people have issues as well. Would someone shove some challah in her mouth to silence her, please?

Eboni and Ramona have a disagreement over who are the oppressed people. She thinks she is the only one who has paid the price for the oppression. Eboni asserts that Ramona’s denial of Black oppression is hurtful in itself. Luann can’t believe how wrong this dinner went.

Ramona storms away from the dinner table, but she just needed to pee this time! She apologizes if she offended them. Sonja blurts out that Ramona likes to have sex with Jewish men. Ramona would prefer that she had been born Jewish. Eboni refuses to let Ramona make this about her white isolation. Brian, who has more tolerance than anyone I know, needs another cocktail after watching this sh*tshow. He might not be taking Eboni’s calls for any more filming opportunities.

Leah is chiming in on the FaceTime call and trying to shut Ramona down. Eboni yanks the phone with Leah inside of it and moves into the other room to vent about Ramona acting up. Ramona is ransacking the kitchen looking for some chicken or something healthier than the potato latkes. We then get a to-be-continued and NOW I need to have a cocktail. Call me, Brian!

Next week, the dinner continues, and Eboni finally gets some answers about her family. Be well, everyone, and see you next week!