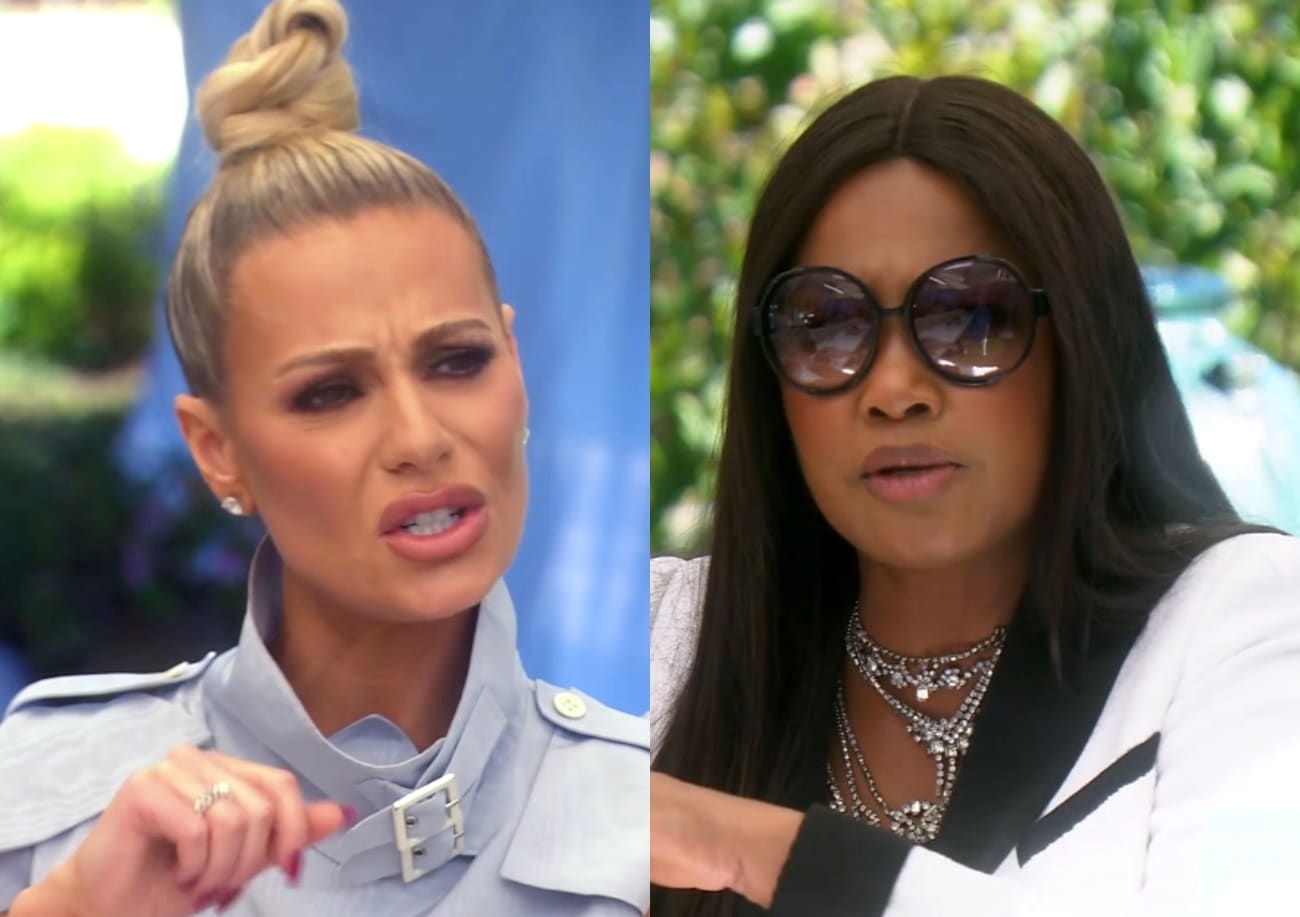 On this episode of the Real Housewives of Beverly Hills, Dorit is tired of Garcelle, but in the end, it’s Dorit’s big mouth that gets her in trouble… once again.

Rinna is experiencing empty nest syndrome big time and is thrilled to have her daughters, Delilah and Amelia, come over for a visit. She is even happier to see Delilah’s boyfriend, Eyal, as she has big dreams of him marrying her daughter one day. In fact, Rinna wastes no time taking them all down to the garage, which houses her beloved gowns, including her wedding dress (hint hint)! Rinna becomes emotional watching her daughters turn into women, and she talks of how proud she is of them as they had to overcome a lot to get where they are today.

Speaking of pride, Rinna is also thrilled to be celebrating her new lip kit launch at an upcoming party, which will be held at Crystal’s house. Rinna muses that Crystal must have volunteered to host at her home since she still has PTSD about Rinna’s house — never forget “ugly leather pants.”

Later, Crystal has Dorit over. Crystal discusses how much she loves hosting events and says, “In normal times I am probably hosting two to three parties a week. It feeds my intense control-scheduling personality.” The ladies discuss the conversation at Kyle’s house three weeks ago and they agree that it’s a difficult situation for Erika. There’s no right way to bring questions up to Erika, but they both think attacking her was not the way to go.

Dorit shares that now she is concerned because Garcelle seems to be coming for HER and it’s “starting to p*ss” her off. Dorit claims that she has no idea where this is coming from and believes that Garcelle does not have the guts to say it to her face. On the contrary, Dorit, I feel like you’re gonna be taking those words back. The thing is, Garcelle isn’t throwing jabs — she is just the first one to call Dorit out on her crap and Dorit does not like that one bit.

So apparently to help Erika get through her quiet, alone time, she vacuums and cleans. Find it kinda hard to believe that’s how she copes with it all… eye roll. Erika is hosting Kyle and Rinna to celebrate Kyle’s birthday. Some party. Rosé is popped and champagne is poured in fancy glasses that “they’ll probably try to take away from me, but I don’t give a f*ck at this point.” Oh, Erika. Poor taste…

Rinna and Erika gift Kyle a faux fur jacket for her birthday and the ladies sit around chatting. Rinna states that the women are a little nervous being around Erika. Kyle tells Erika that Sutton doesn’t want any legal problems or reputation problems. Erika has a big fat problem with that, especially since nothing has to do with Sutton, AT ALL.

It’s time for Erika to spin another dramatic tale about Tom, and Kyle and Rinna eat it out of the palm of her hand. The ladies find out how Erika came across Tom’s affair. Erika claims that she picked up Tom’s phone while he was sleeping and saw it alllll right there. Isn’t it funny that Erika is busy calling everyone cowards, yet she claims to have been too scared to leave her own marriage? Because of the fear, Erika explains that she worked SO hard so that she would be able to “stand on her own two feet.” And that even though she still does not have a prenup, Erika has no money at all from Tom (er, that’s because he HAS NONE!). Seems like quite a lonely life. Interesting — if Tom was in such mental decline, how was he powerful enough to make Erika feel trapped…??

Rinna’s lip launch party is fabulous, and Crystal did not disappoint in hosting the event. Rinna is stoked to be once again promoting a product and refers to herself as a cockroach. She just keeps coming back even when you think she’s dead (in the showbiz world). #true. Rinna is super excited to have a reason to celebrate *her,* and the rest of the girls are thrilled to be donning designer clothing during the daylight hours.

Ironic that Erika chooses “No Apologies” as her drink of choice and incredible that Sutton drinks vodka in her champagne. The girl ain’t playing. A toast is made to Rinna for killing her launch despite it being a pandemic, and the ladies sit down for lunch. Garcelle talks about The Real, and Dorit interrupts, yet again.

Dorit can hardly wait another minute and comes right out saying how Garcelle has been making a lot of jabs at her the last couple of months. Dorit states, “It doesn’t sit well with me. It’s like a bully.” Funny how suddenly Dorit finds her voice but remained mute during the Erika confrontation. Also, being honest and straightforward does not mean one is a bully, Dorit.

Garcelle’s lean back and stare are killer. Dorit attempts to tell Garcelle that her tone is “rude and obnoxious,” and as she rattles off things that Garcelle has done to her recently, Garcelle does not back down. Garcelle remembers everything and even goes as far as saying she’s not wrong about it. Garcelle tells Dorit to “stop it right now.” She explains, “A bully picks the fight. I was reacting to what she was doing.” Garcelle makes it clear that she is tired of Dorit hijacking the moment and wants to be sure everyone has the chance to say how they feel. Translation: Dorit, you talk too damn much!

Dorit questions if Garcelle feels as if they are friends, and Garcelle explains that, in a way, she feels a bit like an outsider and is unsure where she fits in this group of women. Dorit wants Garcelle to be more honest, but the reality is that Dorit just doesn’t like what’s she’s hearing. Garcelle lets Dorit know something that she has heard time and time again: She talks too much. The rest of the women state, “It’s not like you haven’t heard it before.”

In an attempt to defend herself, Dorit makes observations about what Garcelle does to the other girls. Dorit goes low and brings up the Palm Springs disaster where Garcelle shared with the group that Tom still calls Erika. Not nice. Erika and Garcelle were moving past it, and then Dorit (once again) talks too much and throws it in Garcelle’s face.

Garcelle is not having it. “F*ck you with that.” Garcelle is p*ssed off. Dorit plays dumb, but it does nothing but fuel Garcelle’s anger. Dorit was JUST asking Garcelle if she thought they were friends, but now it is crystal clear they certainly are not.

As Garcelle removes herself from the sh*tshow, Dorit shouts out, “Is that the easy way or do you wanna talk it out?” DANG, Dorit got some balls. Seems like the producers told Dorit to step up her game or get out… so, she did just that. Garcelle will only talk with Dorit if she plays fair, but it seems like Dorit bringing this up again is an example of her looking for trouble.

Crystal sticks up for Garcelle and reminds Dorit that she did not know that information was to be kept private, and when Sutton attempts to interject, Erika snaps at her and all Sutton can do is laugh. That sets Erika off: “You can laugh all you want, girl, but I can go all day with you.” Sutton tells Erika not to take her problems out on her because that is very clearly what is occurring: misdirected anger. Erika further snarls, “That small-town sh*t is so wack.” Seems like someone doesn’t care about her reputation…

When Dorit continues, Garcelle ponders, “Do we need to call PETA because she is beating this dead horse!” Garcelle says, “Heard you, it’ll be different” to Dorit, and Rinna jumps in to say how happy she is that the ladies are actually talking about their issues. Typical Rinna.

Kathy has Kyle over to discuss her upcoming dinner party, which she explains takes four days to prepare for. Cracking up that Kathy eats her food on TV trays. Just reminds us all that she is human. Plus, she doesn’t even remember the fight between Garcelle and Dorit cuz she was fixing her lip gloss during the F-bomb drops. Shows you just how petty that fight was, huh?

Speaking of petty… the sisters talk about the setbacks in their relationship: Mauricio’s Agency, American Woman, etc., etc. Kyle walks on thin ice with Kathy, especially while discussing American Woman. Kathy is clearly still hurt by that show, but Kyle insists it was a “love letter to mom.” Kathy did not like how many people believed that whatever was depicted on the show actually happened in their childhood, and they talk about how they wish they were not a fractured sister group.

No one likes being an outsider in each other’s lives, and there is hope that one day, Kathy, Kim, and Kyle will be normal together again. Kyle is grateful to have made amends with Kathy after 10 years and is hopeful that she will get the chance to be with Kim again, too. Kathy trying to cry with all that work done is a bit humorous, but ya gotta love her. Now let’s get those sisters their own show… or at least one starring Kathy!