RHONY Finale Recap: Leah Cries Over Relationship With Rob, Ramona Encourages Ladies to Go Topless, Plus They Enjoy a Night of Identity Swap 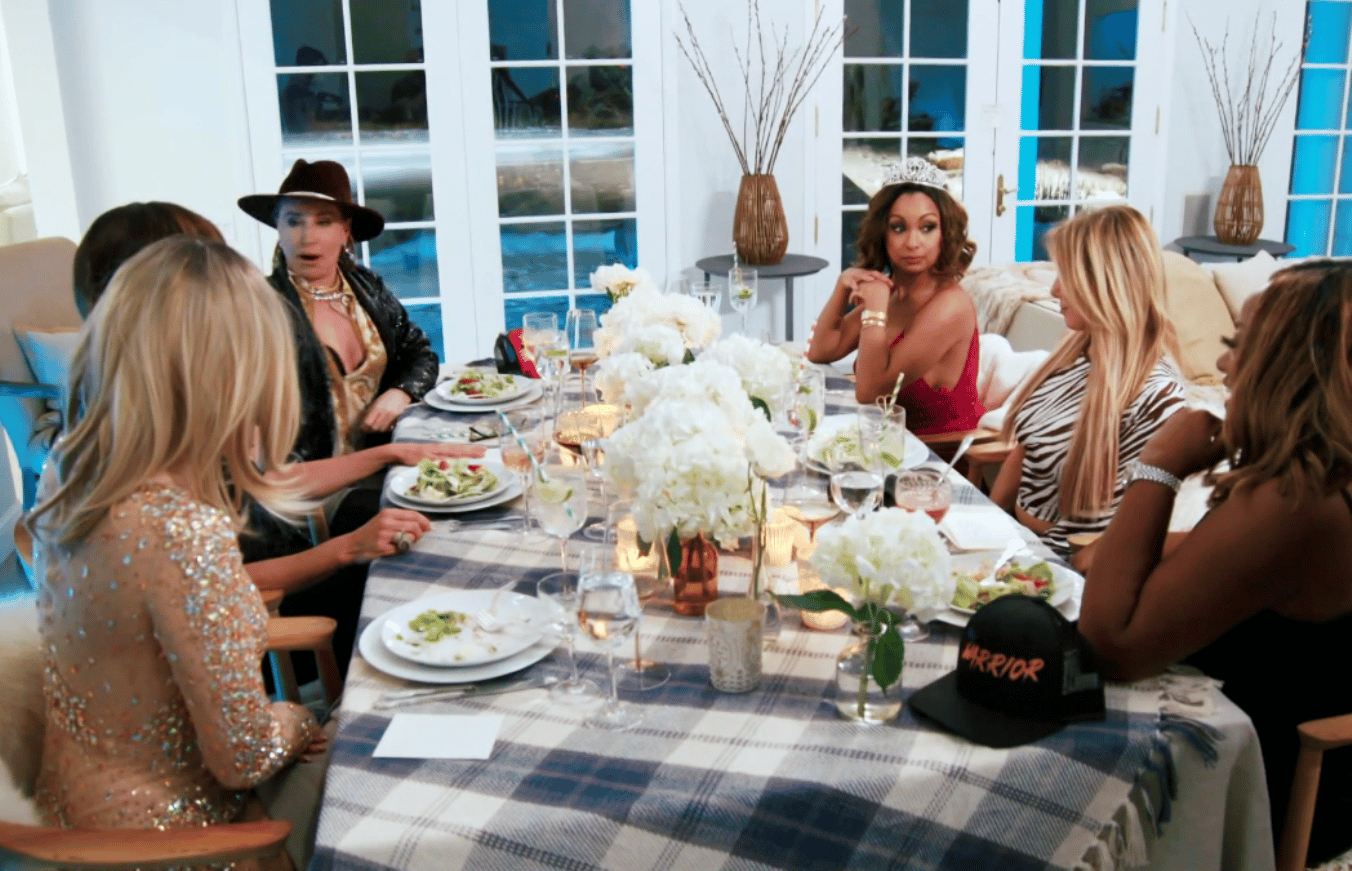 Do you want the good news or the bad news? The good news is that The Real Housewives of New York City season 13 has mercifully come to an end. The bad news is that I must recap this steaming last pile of poop from last night. Can you help me make it through, Blurbers?

We are back from our to-be-continued with Harry Dubin calling Ramona. Luann answers the phone and he thinks he is talking to Ramona. He probably drunk dials on his phone each night until he gets someone to answer. It is sad that he doesn’t even recognize that Luann answered the phone. Luann sounds nothing like Ramona.

Eboni and Leah sit off to the side and commiserate over Harry being a glorified f*ckboy. Sonja shouts out to Harry that she doesn’t want to be around him since he is a toxic cheater. Luann, in her ITM, isn’t buying that Harry and Ramona aren’t f*ck buddies. Me either.

Leah decides to ask everyone about their best and worst sexual experiences. Ramona mentions how she was dating a guy in college, and she cheated on him with a guy with a thumb-sized member. I guess Ramona learned the hard way to stick with what you got.

Eboni shares how she had some dude come back to her room in New Orleans, and he was a wham bam thank you ma’am. Well, we can all relate to sexual experiences like that one, can’t we?

Sonja just likes to feel them up and see if they have a hard bod. She likes sex on a plane and up against the wall. Sonja didn’t come up with anything original to share since she was most likely in an alcoholic stupor and has no memory. Side note: I was expecting something like she had sex with John-John while Diddy watched.

Ramona wants to know if Leah has shown off her new boobs. She decides to go topless and flashes everyone. Sonja can’t believe she went from granny panties to pasties on her boobs. Did production’s sense of desperation show when they talked ALL these ladies into showing off their boobs? Eboni even was shocked that she was pretty much peer pressured into doing that. I don’t know about you all, but I have been on many girls’ trips, and we have NEVER taken our tops off to show off to each other, but others, maybe. Mind you, I am not the least bit of a prude, but I have no interest in seeing my friends’ tatas.

Ramona wants to make it a competition and see who has bought the best boobs. Leah, of course, must show her new additions as well. She is showing off everything that basically Bunny has found to be overkill. Eboni is clearly going au natural, and that is a tough place to be amongst all this silicone. Luann looks awesome, and I would have expected nothing less from her. As far as Sonja, we have been seeing all her sexual parts since basically season one.

The next morning, the house is a mess, and I feel sorry for the “help” who must clean this disaster up. Ramona and Sonja are shocked that Eboni let it all hang out. They can’t believe how carefree and fun she was the previous night.

Eboni is excited to go full throttle with her Countess identity swap. She has got her props and her Jovani gown to reinvent herself as the Countess of NYC Cabaret.

The ladies head out to Calissa for a Grecian experience. Now, this sounds fun, we have a place where I live called Taverna Opa. I have been to girls’ parties there and we had such a blast dancing on tables and doing shots of Ouzo. #goodtimes

Leah reflects on her best Valentine’s Day with Rob. She isn’t exactly a romantic. Did she really need to tell us that? Leah starts crying since she is still in love with Rob she gets emotional when she is tired. She shares that Rob disappointed her by not marrying her #dodgedabullet. Leah is afraid to officially move on since she still wants what she can’t have. She doesn’t want to ruin a chance of reuniting her family.

Ramona likes how Mario used to buy romantic cards and add his own script. She is obviously still very much in love with this man.

Ramona shares with the proprietor that she wants to bare her breasts and break some dishes. The ladies decide to ward off evil energy and release some anger by breaking plates. Can’t they see where all that evil energy is coming from in this group?

Leah says, “F*ck you, haters, I know exactly who I am!” Phew! I am so relieved to know that you have come to your senses and recognized what an obnoxious vindictive human being you are! I can finally sleep at night.

Sonja wants freedom from asset management. No surprise there. Side note: I found it to be a fun scene, but I don’t remember napkins being tossed about when you break the dishes? I need some clarification from the Greek Blurbers on that one.

Bershan finally arrives and I couldn’t be happier! It would have been the icing on my housewife cake if Heather arrived so she could do an identity swap with Leah. Now THAT would have been entertaining.

Luann is channeling Eboni K. Williams, and she is holding court! I am not sure where you can practice law in a courtroom without a valid bar license? Eboni is the cabaret star Luann and does a good job playing her part. Bershan is Sonja of the Morgan family dynasty, and she is doing a pretty good job of it even though they really haven’t spent much time together. How funny would it have been if Bershan came wearing clown makeup and a wig, donning pieces from her Sonja Morgan line?

While chomping on her gum, Ramona resembles an awkward teenage girl, and she nails how Leah is perceived by them. She wants to portray Leah to be as vulgar as possible. Ramona starts practicing saying, “I want hot cock.” Sonja thinks Ramona is enjoying this transformation too much since it gives her the opportunity to let loose a little.

Leah is portraying Ramona pulling around a plasma bag on a cart. I am sorry, I think it is too soon to mock anything that remotely relates to COVID. Bershan comes out as Sonja, and she is decked out in Century 21 attire. She is doing a great job of it.

Ramona is coming downstairs in her Leah attire, which isn’t difficult to emulate: tacky, cheap, and offensive. She nailed it! Sonja comes down as Bershan, and she is all decked out in Versace. Eboni decides to do a little ditty and sings “Happy Birthday” to Leah as Ramona.

The ladies sit down to dinner and answer questions as if they were truly the other person. Leah impersonates Ramona in such a nice way. Ramona wishes she showed her softer side more often, and she appreciates the way Leah answered the question as her. Leah as Ramona hugs it out, just like the BFFs Sonja and Ramona are.

Eboni acts like Luann, who deems herself a triple threat. She also doesn’t say anything that is unkind about our Countess. Sonja as Bershan calls them grandmas and f*cking clowns. She was funny, but she is very clearly channeling herself too. Bershan as Sonja had a life filled with yachts, but she is really about friendship.

Ramona/Leah describes how Leah wants things shoved up her a*s. She starts throwing flowers at her and Leah takes a dive under the table. Luann/Eboni likes using her full name since she earned the right to use the full entirety of her name. She worked hard to get where she is, and she is the hardest working and smartest woman here. Eboni likes Luann’s version of her since she is right on with it. Luann makes for a pretty Eboni as well.

We now thankfully get our ending notes for this disastrous season…

Luann will get to shake her booty in her cabaret show resuming in the fall. She has created a non-alcoholic rosé as well to add to all the other wine products that housewives have tried to force upon the consumers. Bethenny has been the only successful housewife to my knowledge with that endeavor.

Ramona aced her test and is now officially a real estate salesperson! She also bought a waterfront condo in Palm Beach, which is conspicuously close to her platonic friend Harry. Wink, wink.

Eboni has been in constant contact with her half-sisters, but she hasn’t met her dad yet — very odd. She’s dating with the help of a matchmaker. Eboni is also a guest host on The View, and that might be a good fit for her instead of this train wreck of a show.

Sonya has FINALLY rented her townhouse for two years. She also has a comedic caburlesque show, which debuts in New York City this fall.

Leah will finalize her conversion to Judaism in the fall. Bunny gets her wish to have her granddaughter in a top all girl’s high school.

We then get a rambling message from Leah about this “Beautiful intense time of my life where there was political issues and racial issues during a pandemic.” Leah then states how we can have different views and still manage to coexist.

Well, let’s put this dusty chapter on the back of the shelf and hope Bravo never runs it on reruns so we have to endure it again! Thank you, Blurbers, for being there for me each week and I couldn’t have gotten through this season without you! The support and encouragement you gave me while Leah was targeting me was what helped me get through the end of this season! Sending love and best wishes to all of you, and let’s hope to have a better RHONY Season 14!