RHOP Recap: Candiace Calls Ashley a H*e and Slams Her for Ruining Girls’ Trip, Mia Seeks Answers From Her Estranged Mom, Plus Eddie Reacts to Gizelle Bringing Up Cheating Rumors 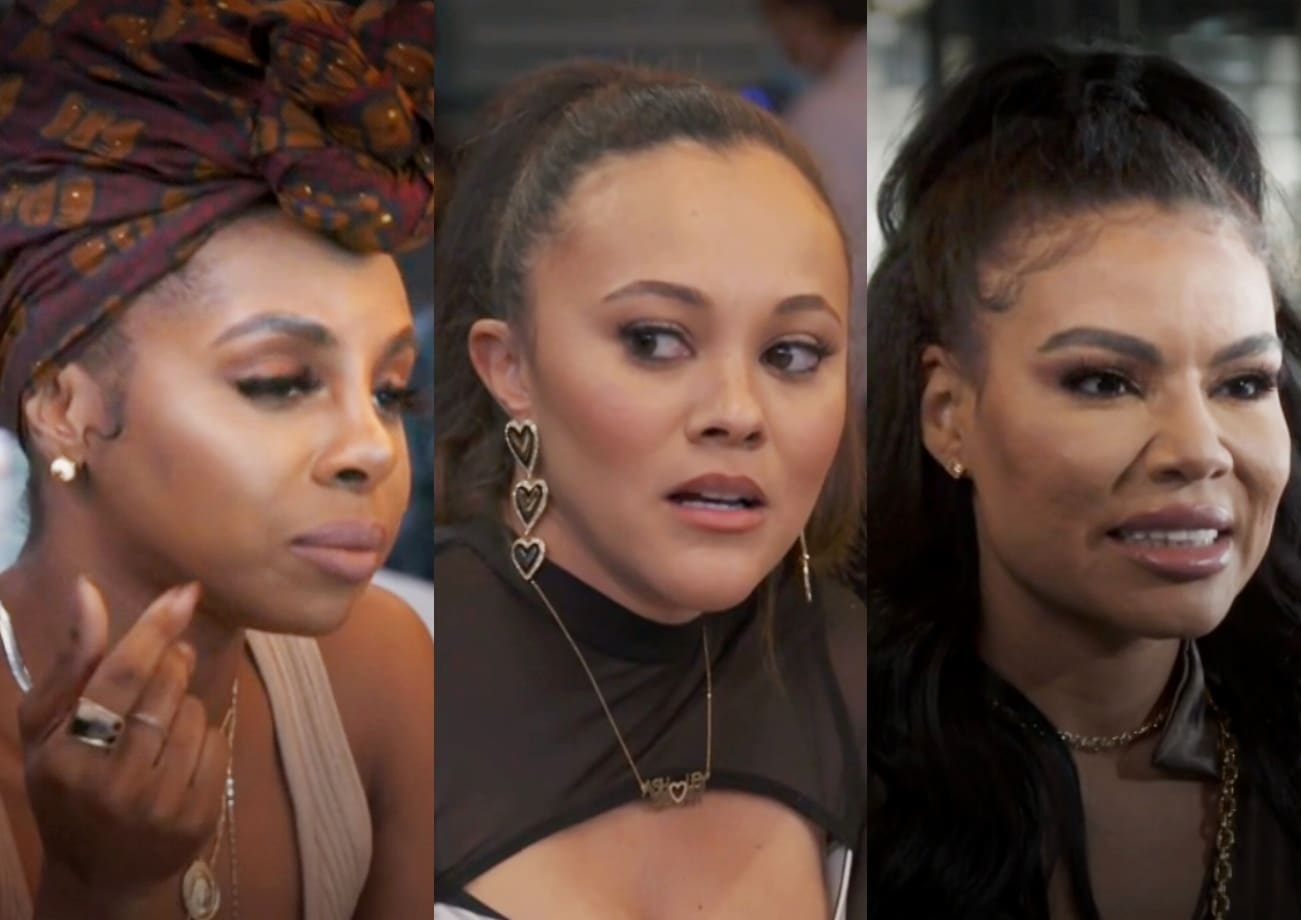 We are back with The Real Housewives of Potomac for Robyn’s birthday and to meet Mia’s mom. I caution you all that you will hear about a very painful chapter from Mia’s past. Candiace is still gunning for Ashley, who she perceives as a wide-a*s milkmaid. Let’s see how these three events come together on RHOP this week, shall we?

Karen is getting a foot massage from Ray. She is so lucky that he is willing to touch her feet. Side note: I am repulsed by feet, and I would never ask my guy to touch my feet. YUCK, just saying. Karen wants to discuss their vow renewal and she wants two gowns. Ray is all, hmm, I didn’t expect you to go all out like that for a vow renewal.

Mia is getting ready to go have lunch with her mom. She asks Gordon for some input on what to wear. Mia is concerned about her mom’s sobriety, and she is proud that she is on this journey. She doesn’t want to disrupt her mom’s progress to a life of sobriety. Side note: Be prepared — they will be having some very tough conversations. #tragic

Wendy, who is sulking in their bedroom, chats with Eddie about what transpired when she was away. She is upset that Gizelle, who has had the most volatile relationship, is causing them the most trouble. Eddie is upset that he was drawn into this nastiness, and he claims it is all lies. He is troubled that he got exposed to this drama since they know what he went through with his family to show his commitment to Wendy. In her ITM, Wendy mentions these “old rumors,” and that struck me as very odd. She thinks they are being hateful since they never experienced the love they have had.

Robyn has arrived at Gizelle’s “West Wing” and is trying to pry open Gizelle’s wonky slider. She has a broken-down door just like her broken-down self. Gizelle wishes Robyn a “happy almost birthday!” She is excited over the launch of their podcast, “Reasonably Shady.” The topic is breakup or makeup, which is about relationships and cheating. These two are the authority on these topics, and if they provide any advice, it should be what not to do.

Gizelle did a little survey of her girlfriends, and they said there was a 350% chance of reoffending. Okay, first off, where did she get her absurd statistics? Did Jamal tell her this to absolve his cheating self? They don’t need to look up statistics — these two are authorities on this crap. Gizelle gets questioned about Jamal by a producer, and she is all nonchalant about her precious Jamal. She thinks poor Pastor Holy Whore is an easy target. Because Jamal walks the walk, darling Gizelle, that bullseye is permanently affixed to him.

Robyn, in her ITM, isn’t surprised that they aren’t together anymore. She wouldn’t share that to Gizelle’s face. Robyn darling, we are surprised you and Juan are still perpetuating this fraud on us too.

Candiace and Chris discuss her “singing path to become the next Bey” career, and she shares how they had a dance-off for the music video for her song. She tells Chris that Gizelle thinks he is riding her coattails. Chris believes his support is payback to Candiace for helping him with his alleged restaurant business.

Candiace has such a burning desire to destroy Ashley this season. Maybe she is hoping she can send her to the Housewife Island of Lost Toys where Monique and Charisse reside? Candiace tells Chris how Ashley was gleefully getting her titty milk out of the fridge. She thinks “No Forehead” is just a messy little girl and resents her intrusion on their trip.

Ashley and Michael are meeting with a massage therapist named Keri to help little Dylan with his nursing issues. Michael is grilling this poor lady on her credentials. Keri massages key areas on little Dylan in hopes of stimulating him so he will be able to properly latch on while taking a bottle. Keri thinks the baby will be much better now. They are hopeful that this will work so they don’t have to resort to anything surgical.

Ashley and Michael discuss their intimacy issues, and I don’t know about you all, but it grosses me the f*ck out. She is concerned that he changed his view of her after witnessing the vaginal birth. Michael assures her is still attracted to her , and his focus was only on his baby boy and not on her overextended vagina. All I can say is some conversations are better to be had off-camera since this one has repulsed me on so many levels.

Robyn is talking with her son Carter about how she has been laying around a lot. She tells him that she is going to see a life coach since it is not a good look for a mom to be a couch potato. Speaking of not a good look, that atrocity of an outfit in Robyn’s ITM is NOT a good look. Robyn decides to call a life coach, and she discusses what she has been feeling. She blatantly lies to her and says she is in a stable, happy life. Robyn truly lives in some sort of la-la land where Juan is still in love with her.

Mia and her mom Veronica sit down for lunch to chat. She has a lot of questions for her mom since she got out of rehab. Veronica shares how Mia acts just like her dad, and I don’t gather that is a compliment. She is at first reluctant to discuss Mia’s dad. Veronica then relents and blames him for introducing her to drugs.

Mia was burnt badly with oatmeal when she was under the care of her dad. Veronica was called at work and had to go home to attend to her badly injured little girl. Mia’s dad was in the basement having sex with another woman instead of taking care of Mia. Veronica attempted suicide over her feelings with her dad. Mia thanks her mom for sharing these uncomfortable conversations. Side note: That was a tough scene to watch, and there was honestly a part of me that felt guilty hearing them describe something so sensitive regarding the neglect Mia had to endure.

Karen is meeting up with Mia and Wendy to help her pick the second dress. She already went over her budget with a $10k dress. Wendy tells Mia she felt like she was hit by a Mack truck in Williamsburg. Yeah, that truck was driven by the green-eyed bandits with Ashley riding shotgun. Karen decides to show them her first dress, and I am rather perplexed about her choice. #toomuch

Wendy shares with Mia that the event is being held in the dress venue. They don’t seem too impressed with this venue. Production shadily shows that the outdoor view of the parking lot basically in an industrial strip mall.

Mia shares with Wendy and Karen that she got an invite to a birthday party for Robyn. They weren’t invited to this party, and neither of them is bothered by this. Karen attributes this diss as loneliness and bitterness make for a nasty woman. She is holding firm on waiting on Gizelle to take back her alleged death wish on Ray.

Candiace with her purple turban and Chris are out for a bite to eat. She is going into music video week, and they have spent a lot of money to make this happen. They are not on the same page to support each other. Chris hasn’t been available at her sessions since he has some cooking classes. Production shows how her husbandger hasn’t been available.

Chris explains that he can’t always be available, and he only volunteered for this . He wants an allowance if she has these expectations. Chris claims to have other responsibilities. He has more important things to do like — play golf. Candiace wants to cuss him out, and she demands while she stomps her little feet for him to check his attitude. She did thankfully find a little triangle of napkin to blot those little tears. Candiace has literally become her mother since Chris is sticking his hand in her purse. Chris better watch out or he will get clocked with that bag too. He is already working toward that by leaving Candiace with the check.

We then go forward three hours for Robyn’s celebration. WTF is Gizelle is wearing, and why is her hair ashy colored? Candiace arrives, and she is still upset over her unnecessary foolishness with Chris. She did find time to change her turban to a brilliant shade of orange for this get-together. Robyn arrives late, of course, since she is Robyn. I hope someone bought this woman a watch for her birthday.

Robyn discusses how Wendy trashed her relationship with Juan. She doesn’t appreciate that she had been condescending and wasn’t contrite with her apology. Dear delusional Robyn, she can’t be remorseful for stating the obvious. Gizelle asks Ashley if she added hot sauce to the conversation with Wendy. She claims she just asked if she and Eddie were having intimacy issues like her and Michael.

Candiace is now fired up and is clearly provoked by the milkmaid Ashley. She believes Ashley brought her shady self to Williamsburg to disrupt their girls’ trip. Candiace wishes that Ashley and her milk jugs stayed home. She thinks Ashley was body-shaming herself by showing off her wide a*s and her hyper-extended forehead. I have to say this: No matter what you think of Ashley, nobody should be shaming a woman who just gave birth. I do believe there is some projection going on here, and maybe Miss Candiace is afraid of losing her perfect little pageant bod if brown d*ck impregnates her? We then get another to-be-continued…

Next week, Candiace and Chris are still having challenges. Karen and Gizelle are still demanding apologies from each other. I hope everyone is having a wonderful Labor Day weekend, and see you all next week!