Home Real Housewives of Potomac News RHOP Recap: Gizelle Opens Up About Jamal’s Cheating Rumors and Karen Apologizes to Gizelle for Hurting Her and Her Kids at Mia’s Goddess Party

RHOP Recap: Gizelle Opens Up About Jamal’s Cheating Rumors and Karen Apologizes to Gizelle for Hurting Her and Her Kids at Mia’s Goddess Party 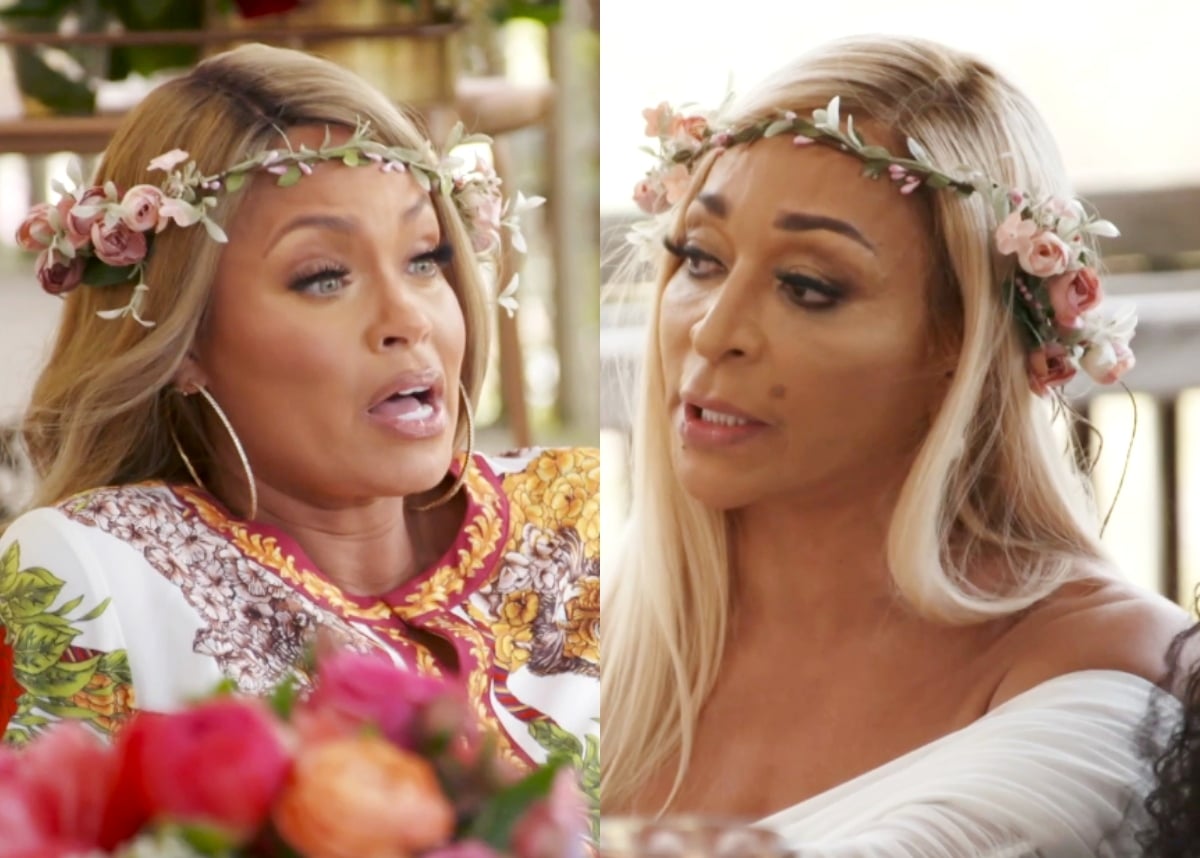 Let’s join our Real Housewives of Potomac whilst Candiace and Ashley are desperately fighting for the RHOP pageant crown. Can Karen and Gizelle ever be able to coexist without setting shady fires on each other’s bushes? We shall need to watch and see!

I first must let you all know that this episode is a total snore, but I promise you that we might have some cease-fires —for the moment anyway. We are now returning to the school lunch table where two grown-a*s women are behaving like total mean girls.

Candiace and Ashley are still going in hard on each other. She was insulting her body out of anger and claims she wasn’t body shaming Ashley’s wide-bodied a*s. Candiace won’t take back the lack of forehead comment, though, since it is rather accurate.

Ashley forewarns Candiace that she doesn’t want her to open a door she can’t close. Poor Askale is stuck in the middle of these two beauty queens who are basically spitting and snarling at each other. Would someone please give Askale a spit shield to protect her?  Ashley then delivers some hair shade, which can make a lot of women feel very sensitive. She thinks Candiace is sporting all these turbans to cover up her dry a*s hair. Side note: I can speak from experience that a great way to moisturize dry hair is to use some good dry oil spray and wear it up in a bun or a good “turbie twist”!

Gizelle decides to give a toast for Robyn’s birthday because that is why we are allegedly here. She tells her how much she loves her and appreciates that she is a ride-or-die friend without a backbone. Gizelle loves that Robyn always sees the best in everyone — even those who the rest of us can’t find a darn nice thing to say about.

Mia then pivots and wants to invite everyone to a Goddess lunch, which will basically be a picnic at a park. She hopes that some of the ladies can be able to make amends and production has urged her to host an all-cast event.

Mia, who obviously has been appointed the shit-stirrer this episode, delivers the news that Karen is still awaiting an apology from Gizelle. She thinks that most arguments are just a miscommunication, which I agree with, BUT this disagreement goes back so far it is impossible to determine the root of the issue. Production provides countless examples where these two ladies have been yanking the HBIC crown off each other for the last six seasons. Gizelle scoffs at the suggestion and assures her that Karen and Ray will be dead in the ground before that happens. She knows the word “dead” is a trigger for Karen. Why would she keep poking our Grande Dame?

Karen is now checking out a location for her tourist video for Surry. The producer asks, “Why are they are filming the Surry tourism video in Potomac instead of Surry County?” Karen, in her ITM, hesitates since she wasn’t prepared for that question and comes up with wherever she goes Surry is. Production continues to be super shady to Karen by showing scenes titles, such as not Surry County. Karen struggles with highlighting everything Surry has to offer a tourist.  She misstates that they have a Trader Joe’s instead of Farmer Joes. Karen is trying her hardest to promote her beloved hometown, but it isn’t a well-kept secret that peanuts do come in a shell. Also, why the heck would you go down a slide in a dress?

Gizelle is talking with her girls about her marrying again. She claims she doesn’t want to get married again, but why did we have to be subjected to the greasy Sherman from past seasons? Gizelle pretends that now she has decided that it is no longer acceptable for her to depend on a man or answer to them. She was afraid of her losing her financial independence after her divorce from Jamal. Gizelle wants them to learn from her mistakes. She doesn’t want them to lose themselves in a relationship, and THAT is some sage advice for these mature young women.

Candiace arrives home after her rehearsal, and I sense a little tension between her and Chris. She is acting perturbed that he wasn’t there. Candiace eyeballs that cocktail that Chris is drinking at 4:50 p.m., and you can clearly tell she doesn’t appreciate his day drinking while she is trying to launch her popstar career. Chris reminds her that he has a job, and he claims to be working but the camera pans to his cocktail. He has a little meltdown over his very important job managing his wannabe pop star wife. Chris is whining about the responsibilities involved, and Candiace pretends that she is appreciative of the sacrifices he is making for her.

Wendy and Eddie take their kids out for some fresh air. She mentions that the kids have been asking about what is going on in the media now regarding the police. We now get a clip where Wendy is weighing in on the Derek Chauvin case. Wendy asks Eddie about how the conversation was covered within his family, and he tells her that his family had those tough conversations with him.

Wendy starts talking with Karter about the BLM movement and the police’s relationship with the Black community. Karter, who seems to be a very mature young boy, asks some very good questions about how to navigate this current world we live in. He has hopes of being the next Martin Luther King, and this world could use a current-day version of that very inspirational man. Bravo, Karter, dream big!

Karen is meeting up with Ashley, and baby Dylan joins them. She is so excited to finally meet him. Karen is determined to win him over since little Dean is literally terrified of her. Karen tells Ashley that she missed her on the trip. Ashley wants Gizelle and Karen to make amends and so she can be a part of their Venn diagram.

Robyn is meeting with her life coach, Denise. She describes what she has been feeling, and she claims her business has really taken off. Robyn shares how a close friend scammed them and she hasn’t recovered from it. Denise thinks she has been affected by her past and wants to help her to move forward.

Denise then oddly asks Robyn about her wedding plans. She tells Denise how Juan isn’t enjoying this Robyn who isn’t engaging with her family. Robyn expects Juan to be there for her since she stood by him in the past. Side note: I have been to a life coach before, and I don’t remember talking to them about my personal relationships. It involved my career direction. Sorry, I digress, but this woman needs a professional doctor to deal with her issues.

Mia has planned an event that will hopefully empower them. The ladies are all coming in their best Goddess fashion. Candiace, aka Diana Ross, arrives with her short wig, which is rather flattering and covers up her dry hair issue. Robyn arrives looking pretty, but as expected, she’s very late. Petty Candiace must of course remind everyone that Ashley is the only one excluded from her music video.

Mia decides for everyone to do a round-robin of positive comments. Ashley respects that Candiace is following her dreams. Candiace appreciates Ashley walking in her motherhood journey. She had to really dig to find something nice to say about Ashley, and she wore her shovel down to a nub.

Robyn loves how Karen can laugh about herself. She also loves Wendy’s passion for her family. Askale admires how confident fake Gizelle is and appreciates Karen’s wisdom. Gizelle can’t come up with anything nice to say about Karen. Wendy thinks if Gizelle was a true friend to her she would have approached her first instead of using Ashley to deliver the rumor to the group. She is only giving Gizelle a temporary reprieve, but Dr. Wendy will be very closely watching her back in the future and won’t allow herself to be embarrassed again.

Candiace then delves into what happened when Gizelle’s dirty laundry was aired on national television about Jamal. Gizelle asserts that this wasn’t breaking news for her, and she and Jamal had already talked it through. She says they amicably decided to not go different ways over the other woman. Gizelle acts like she knew all about the binder. She pretends that Jamal told her about the contents of the binder.

Karen says that Gizelle brought a “whole-lie relationship” to the group. Candiace is happy that Gizelle expressed her true feelings, but did she really? Karen then acknowledges the hurt that Gizelle’s daughters suffered and apologizes first just to them for what she said. With some prodding, she also throws in an apology to Gizelle as well.

Robyn just wants them to wipe the slate clean. Gizelle wants to move forward on a path to respect. Ashley was hoping she and Candiace can reset, but she isn’t terribly hopeful that will ever happen between these warring pageant queens.

Next week, Ashley tells her family that Michael wants to get into the movie business. Candiace has her music video shoot, and it seems to be poorly produced. Dorothy also has an open mic moment with Karen claiming Chris signed up to be a house husband. I wish everyone a wonderful week!