Home Below Deck Mediterranean Below Deck Med Recap: Chef Mathew and Lexi Hurl Insults at Each Other, David Sustains Brutal Injury and Mzi Reveals His Feelings for Courtney

Below Deck Med Recap: Chef Mathew and Lexi Hurl Insults at Each Other, David Sustains Brutal Injury and Mzi Reveals His Feelings for Courtney 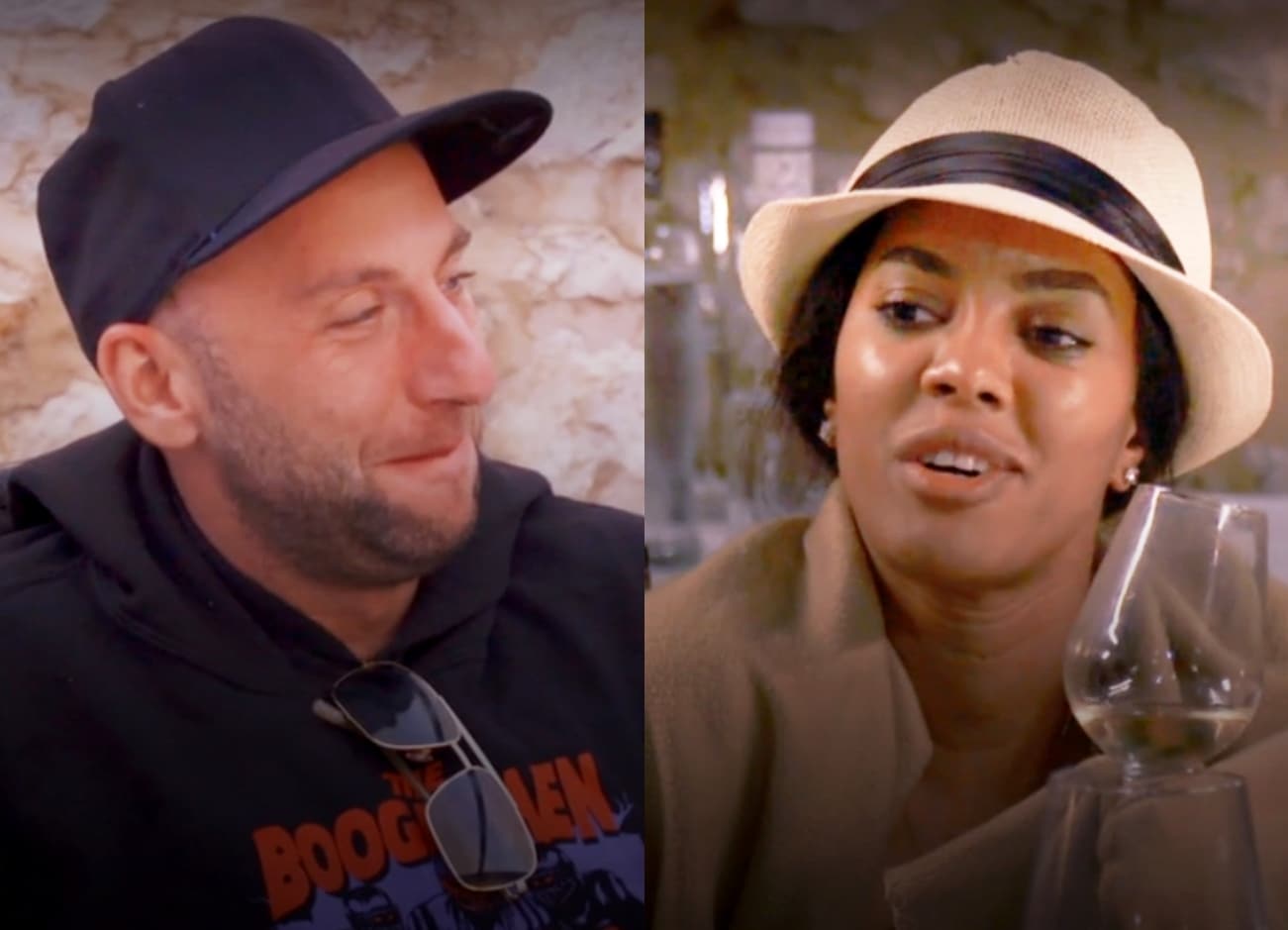 On this episode of Below Deck Mediterranean, Katie is still trying to delicately break up with Deloni, aka Delaney, while Chef Mathew and Lexi continue to butt heads. When does it go too far and will they ever get along?

On the last day of the charter, Katie attempts to let Delaney down gently, and Delaney is perplexed. Katie tells Delaney this is the end of her line, yet Delaney is not taking no for an answer. Delaney calls Katie “the queen” and justifies how she has done a good job. And despite being let go, she decides to join the crew (that she was once a part of) for a final night out.

Chef Mathew is THRILLED that the extra stew is packing her things and going; however, he feels that it should be Lexi who should be sent home. Lexi looks disappointed that Delaney will not be staying — who else will she boss around?? And now Lexi will actually have to work. Imagine! Lexi claims she “feels bad” for Delaney since Katie made a big deal about being “stressed out”…no thanks to you, Lexi!

Mathew throws together a great breakfast for the guests, David brings the boat in, and Delaney gets invited to join the deck crew, since she is, after all, a “true” deckhand. She is apparently more comfortable outside — besides, she needs a break from all that ironing.

When Delaney is set up to throw the docking line, she misses multiple times, causing stress on Malia and not impressing ANYONE with her work on the ropes. Doesn’t Delaney have allll this deck crew experience?  At least that’s what her CV says… Curious watching her in action now, messing it all up. Eventually, she gives a good heave and the yacht can dock, but not before an alarm goes off, causing Captain Sandy to prep Malia for an underwater dive to check for problems.

The crew bids farewell to the guests, and they prep to meet in the main salon for the tip meeting. Before everyone gathers, Delaney thanks Captain Sandy for the opportunity, and Sandy thanks Delaney for her positive attitude (buuuut she’s still firing you, Delaney). While at the meeting, Captain Sandy explains that the owner of the yacht has arranged for the whole crew (including Delaney) to go out and have a day off tomorrow. Everyone is in it to win it. Courtney is even teaching Captain Sandy how to twerk — well, kinda.

Over some cabin clean-up, Lexi and Delaney chat about the crew and Lexi calls Mat socially awkward. She further tells Delaney, “If he was the last man on Earth, I would rather die.” OMG, Lexi! We all know you hate him, but damn!

When Captain Sandy pulls Malia aside to reprimand her for causing the alarm to go off while docking, it is hard to stomach. Um, Sandy? Wasn’t it your idea to let Delaney work on the deck for the docking? I can’t with her “leadership,” especially when things go badly.

Side note: If I were Delaney, I would NOT be making the beds. She just got FIRED. Go drink a drink. Put your feet up. After all, Katie doesn’t think she needs Delaney soooo.

Malia heads down in her scuba gear to check and see if anything is caught. Luckily, it was cleared, and the crew is officially down to party. On the way to dinner, Delaney is trying to learn the group, despite having to say goodbye to them tomorrow. If only she didn’t befriend the most hated person on the boat: Lexi.

Over dinner, Mat explains he is nonmonogamous, and Delaney shares that she has been to sex parties in the past. Too bad Mat pushed so hard to get rid of Delaney. They would have been a (non) match made in heaven!

Everyone is getting pretty drunk. Delaney tells Lexi that they are friends (so cute of her to think they have a relationship deeper than Delaney doing Lexi’s dirty work), and Mathew reminds Katie that she is his favorite chief stew. Courtney jumps on the “we love Katie” bandwagon and David stands to make a speech. He proceeds to go around the table highlighting everyone’s best characteristics, and when he gets to Mathew, leave it to Lexi to talk smack. She mumbles to Delaney under her breath that Mathew quit the first day on the job (which he did), buuut, not the time.

Malia calls Delaney out for dropping the heaving line and Malia gives some advice: “Don’t be afraid to be great” as a woman deckhand, and essentially, don’t lie on your CV. It seems as though Delaney doesn’t enjoy getting advice, but Malia, she’s leaving. Who cares at this point?!

After dinner, everyone heads back to the yacht for a late-night party in the hot tub… well, everyone but Lexi, who is “over it” and is hungry, yet again. Tapeworm, perhaps? Lexi is missing out on a full-on hot tub rager.  David has high hopes of taking Delaney to a guest room and is just going to go for it since he has nothing to lose… except maybe his teeth. While attempting to follow Delaney, David eats it HARD. He jumps and hurts everything from the knee down. If David can’t walk, Delaney may be sticking around as a deckhand after all.

While late-night snacking, Mat calls Lexi clueless because she keeps calling Delaney Deloni, and when Mzi jumps to Mat’s defends, Lexi snaps, “I don’t know why Mzi is coming in now like Captain Save a Ho.” This is just not going to end well, especially when Delaney throws on a skin-tight cheetah suit and makes crew members practice superman moves with her. WTF is happening?! Despite a potential connection, Dave goes to bed alone with his bruised leg and ego.

The next morning, Dave has an incredible bruise on his upper thigh. It does not look good, but he is pushing through it since it’s a day off. Lexi chooses to sleep rather than join the group, and to be honest, I don’t think she will be missed.

The crew def needed this day off.  They play on water toys and let loose. Lloyd has a heart-to-heart with Courtney and tries to find out if she has true feelings for Mzi. Courtney admits that although she has been giving Mzi vibes, she explains that they are more friends than couple material, but yikes. The night before, a drunk Mzi decided to order Courtney a bouquet of roses, and now what is Lloyd to do? Tell Mzi the bad news or just let it unfold naturally?

As the group returns to the yacht, they all begin to get ready for their big day out to the waterfalls. There is plenty of alcohol flowing (particularly for Mzi — likely to make his flower debut more bearable), and after a tour of the beautiful views, they sit down to have a picnic.

Everyone is pretty drunk right now, and Mathew outright says, “Hey, Lexi, you leave and she stays,” pointing at Delaney. Mathew doesn’t stop and states, “I’ve never disliked someone more in my life.” To that, Lexi retorts, “You’re a nobody.  You’re a low life.” It goes back and forth like this for far too long, and I think it’s safe to say Mat and Lexi can get pretty ugly, pretty fast. Even the stray cat that was hanging around the picnic took off when Lexi’s voice went up six octaves. Courtney does her best to separate and deescalate, but the bickering crewmates can’t seem to stop themselves. Lexi yells, “My bank account is still fat,” and I am confused about what that point has to do with anything. Lexi believes Mat is bitter because no one wants to join his sex orgy.  Woah. Woah.  It’s time to bring it in here.

After a tense picnic, Mzi is very, very drunk. The guy can’t even stand on his own to tie his shoe! What an absolute disaster. There is a very clear divide in the group, and Lexi is the only one on the “not fun” spectrum.  She falls asleep on the van ride to dinner and chooses to sleep in the van rather than head in for dinner. Even Delaney tries to get her up, but Lexi refuses.

Two hours and 55 minutes later, Lexi makes her entrance. And so do Courtney’s roses from Mzi. The delivery gets made, and despite being wasted, Mzi wants to curl up in a ball and disappear when the roses arrive. Courtney does a wonderful job of making light of the situation, but that’s about where the light banter ends.

The Lexi/Mat battle ensues once again, and things take a turn when Mat tells Lexi, “No one here likes you.” Lexi fights back, but this time she goes too far when she uses the R-word. Mat lets Lexi know that is unacceptable to use and that perhaps Lexi has bad parents if she thinks she can throw that word around freely.

Lexi, not one to back down, stands up and snarls to Mat, “Your parents should have aborted you.” WHAT IN THE… I bet at this moment, Delaney is thrilled to be exiting! To be continued…