Home Below Deck Mediterranean Below Deck Med Recap: Lexi Gets Fired and Captain Sandy Lashes Out at Malia For Not Reporting Dave’s Injuries

Below Deck Med Recap: Lexi Gets Fired and Captain Sandy Lashes Out at Malia For Not Reporting Dave’s Injuries 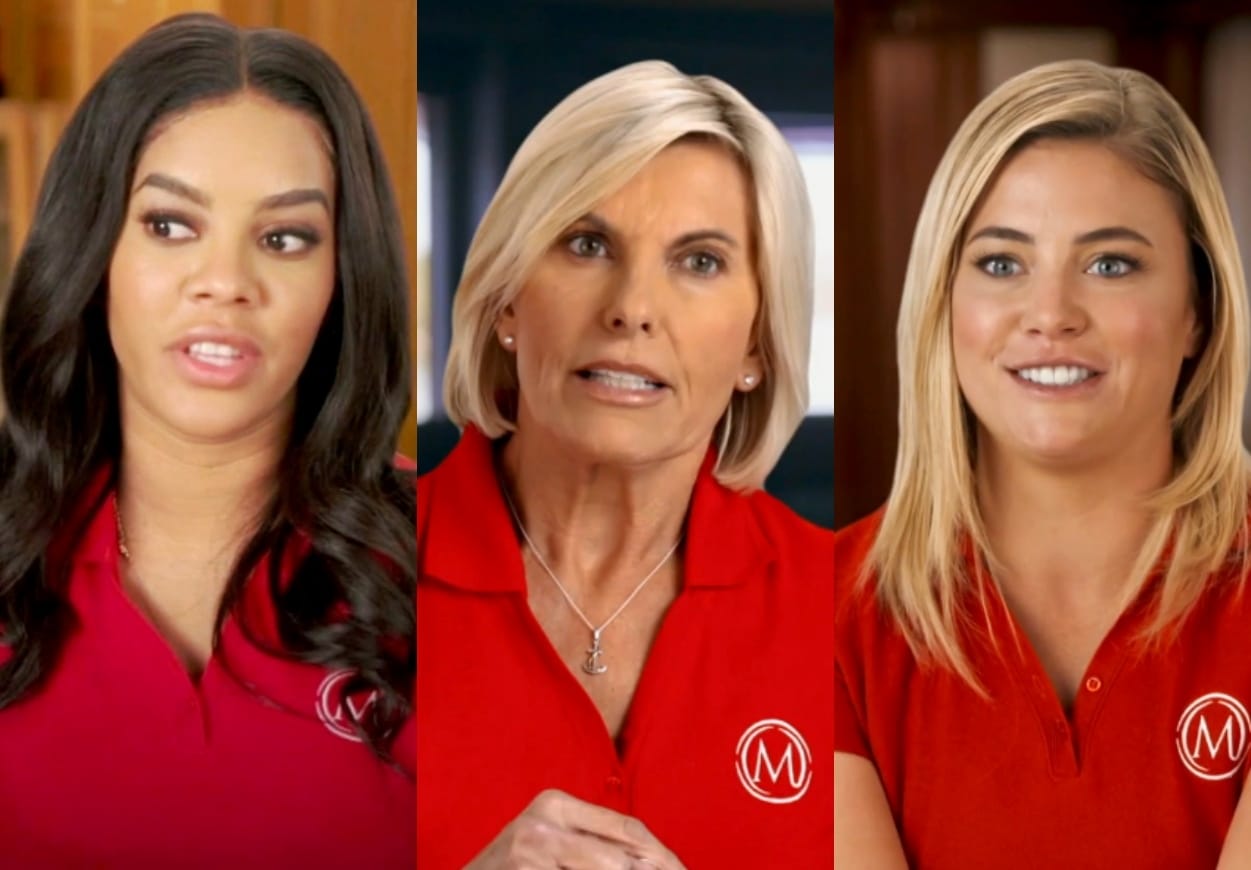 This episode of Below Deck Mediterranean picks up right where it left off: Lexi and Mathew slinging digs at one another and embarrassing the whole crew on their night off at dinner. #Typical.

Lexi and Mathew cannot seem to stop. Both parties are in the wrong (Mathew seems to instigate the situation by repeating things like, “Welcome back, the worst person in the world,” while Lexi continuously repeats how large her bank account is), but Lexi said Mathew should have been aborted, and instead of owning it, she claims that Mathew deserves it.

Courtney decides to jump into the ring and calls Lexi the C-word. Even Lloyd gets in on the action when he states, “Lexi, sit back and shut up.” Lexi doesn’t handle criticism well, and she clearly believes in ‘an eye for an eye,’ and so she spews back to Courtney, “You can’t f*cking twerk. You’re wack.” WHAT JUST HAPPENED.

Malia attempts to be the voice of reason on the van ride home. She does agree that when Mathew gets drunk, he tends to be fresh toward Lexi. HOWEVER, Lexi goes way below the belt. Malia suggests that Lexi drop the whole money schtick and just try to be nice in general.

Everyone piles back onto the boat post WWIII, and I am just wondering if Lexi is a psychopath? Phoning her friend after a night like that, chatting about the events that unraveled so casually. Does she have emotions Feelings? A heart? Taken from that exact convo: “Every time I have a friend that’s like, not rich, they try to ruin me.” Is that what the issue is, Lexi?

Even though Mathew and Lexi were out of line during their fight, Katie and Malia believe that Mathew is more valuable right now since a chef is harder to replace. Mat’s drunken ultimatum that he threatened to give to Captain Sandy (either Lexi goes or he goes) could really rock this crew, and let’s be serious, there’s no way that duo could work together onboard.

When Katie turns into the bunk she shares with Lexi, Lexi beelines out and calls her mom. Lexi tells her mom that the chef is a weak person and she can make him cry. She feels as though everyone should be fired for insubordination, and she makes it clear that there will be no apologies made on her end, so Mathew better prepare himself.

The next morning, Delaney is packing her things to go and David can hardly walk after his drunken injury. Delaney exits the boat after saying farewell to the crew and being told she is a great asset (but goodbye, we no longer need you). Something tells me they’ll be wishing they kept her for the next charter…

Katie finds Captain Sandy and asks to speak with her, and in the meantime, Malia and Mathew discuss the night before. Malia lets Mat know that slinging insults back and forth at each other is not the best way to communicate. Mathew states he will not apologize to Lexi, since he meant exactly what he meant. Ouch.

Things are a bit unstable within the group, and so Malia tries to feel out her deck crew. She states that her crew never has to be okay with things that make them feel uncomfortable, and she really tries to make it a safe place for everyone in her crew. To be honest, she is being a great leader here.

Katie sits down with Captain Sandy to fill her in on the drama from the night before. The first thing Sandy asks is who started the fight. Conveniently, Katie cannot recall, but she is able to rattle off a long list of things Lexi said to Mathew… AND Courtney.

Captain Sandy decides to call a meeting with Mathew, Katie, and Lexi in the main salon and she is p*ssed. Lexi claims, “Mathew has been attacking me since the second charter.” Lexi states that Mathew started the argument. Lexi says that Mathew keeps getting a pass for his behavior, and that’s part of why her behavior was justified. Mathew makes it clear that he finds it difficult to work with Lexi, and Lexi throws him under the bus. She tells Captain Sandy that Mathew made an ultimatum: Either Lexi goes or he goes… and Captain Sandy is less than thrilled to hear this news.

She is too busy playing clean-up. Sandy calls for Courtney and Malia and hears their side of the story, including Courtney calling Lexi a c*nt. Malia and Courtney explain that Lexi and Mathew both stooped pretty low, but the real issue is that Lexi goes too far. Malia states that she feels as though Mathew instigated last night, but Lexi kept going.

Captain Sandy gathers all the evidence and makes a “hard” decision. She tells Lexi, “From what I see, you’re a terrific human being.” WHAT. That certainly shows this captain knows nothing about her crew. Captain Sandy has decided to… fire Lexi. Now quick! Call Delaney back! Love how Sandy tries to give Lexi advice on how to behave in the future and then they hug it out.

How awkward when Katie goes in to talk to Lexi, per Captain Sandy’s orders. Lexi legit shuts the door in her face. Lexi also does that to Malia. “If you don’t mind, I kinda want to be alone.” And although Lexi is doing the packing, Mathew is not off the hook yet. Captain Sandy meets with him and reminds him that he is replaceable, so he better start owning his BS. She also threatens him to never do an ultimatum again.

Lexi refuses to say goodbye to the crew that was being “extremely mean and evil” (this is coming from the girl who referred to herself as Satan). Off Lexi goes, and I am here to tell ya, she will not be missed. Captain Sandy holds a meeting with the remaining crew. She has a few reminders: No name-calling. Provide for the client. And she asks the group to move forward and do their best.

Charter number six is just around the corner, and during the preference sheet meeting, we learn, “These guests are looking for a mix of adventure and time to stop and smell the roses.” The primary does not drink, which is a nice change of pace from the last group on board.

OF COURSE Katie can’t make a call about getting Delaney back. She tells Malia she isn’t sure if Delaney is that helpful, but Malia is doubtful. Katie claims she would rather work harder and longer than having the “emotional stress” of bringing someone else on to join the interior. Katie meets with Courtney and lets her know that they are going to go hard, just the two of them. Captain Sandy is even a bit hesitant of Katie’s decision and lies through her teeth that she trusts Katie’s choice. According to Katie, no help is better than bad help.

Captain Sandy, being Captain Sandy, lurks around and sees Dave limping about carrying provisions. She asks Malia to come talk to her and questions Dave about his injury. Captain Sandy calls Dave’s bruise a major injury and flips out on Malia for not reporting the incident. Sandy freaks out and berates Malia for “minimizing” the situation. You know Captain Sandy and her rule-following. Sandy snaps, “I don’t give a f*ck. Stop making excuses about it. You call me when someone’s hurt. I made it very clear.” Who would have ever thought Captain Sandy would turn on her favorite? Goes to show you that stress makes you do crazy things, huh?