Home Real Housewives of Beverly Hills News RHOBH Recap: Erika Says She Has Zero Dollars and Apologizes to Sutton; Garcelle Shades Erika With “Never Have I Ever” Game?

RHOBH Recap: Erika Says She Has Zero Dollars and Apologizes to Sutton; Garcelle Shades Erika With “Never Have I Ever” Game? 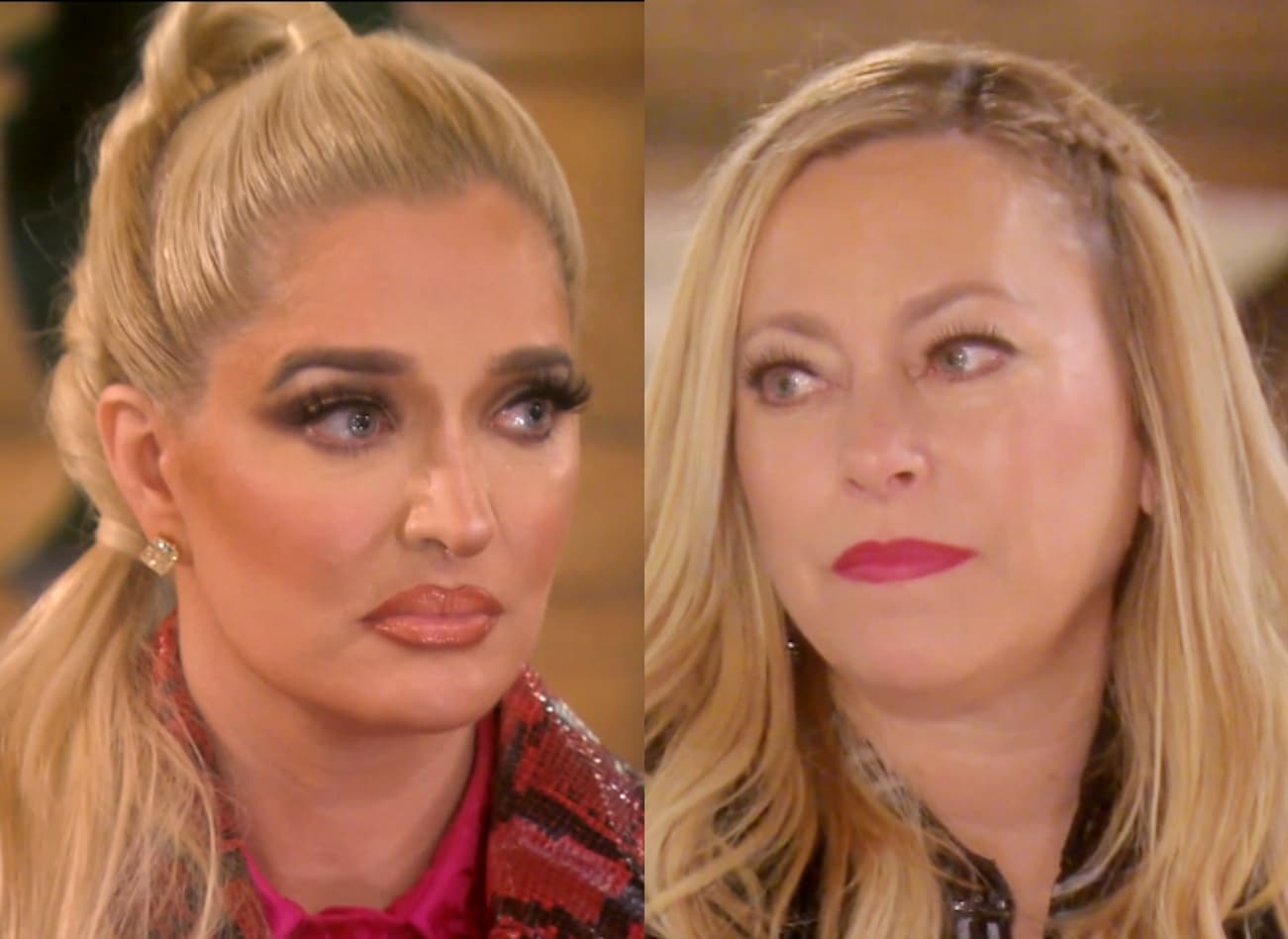 Kathy’s girls’ trip is impeccably planned, and despite some hiccups, all of the women are still down for a good time. Does Erika make amends with Sutton or is that door to their friendship shut and locked? Find out on this episode of the Real Housewives of Beverly Hills.

It’s time for wine tasting in Temecula, and Kathy, the wine expert, does a lousy job of practicing the five S’s for proper wine tasting execution. You see, she could only remember four of the five… and not even in the right order (for reference, it’s see, swirl, sniff, sip, and savor — or swallow, according to Kathy). The ladies travel via cable car to vineyard after vineyard, and they are having a grand old time tasting all of the wines.

It doesn’t take long for the conversation to turn to Erika since she has decided to skip today’s activity. The discussion highlights Tom’s burglary and how he was still in his home when he was burglarized. Curious that’s the case considering it seemed as though all his assets (including his home) were taken from him when this all went down.

Rinna loves telling the tale to the ladies, and Garcelle actually says, “you cannot make this up,” when they hear about Erika’s son’s five flip car crash… in the snow… in LA. These stories are incredibly hard to believe, and when Sutton asks how Erika knows all these details, Rinna tries to find a way to defend Erika and her bizarro web of lies. Sutton stays mute and has decided to hang up her detective hat since it only seems to get her into trouble. Sutton states, “I’m letting Scooby and Scooby’s friends figure it out.” LOL.

Mid wine tasting, Kathy interrupts the girls to explain her head-neck-ache is bothering her, and so she will be leaving the crew for a massage. Are we just going to pretend she didn’t say she got hit in the head with a golf ball while filming a Barbie commercial years ago? There is so much to unpack here. It almost sounds like an Erika injury… except Kathy didn’t flip her car.

ALSO, when they all start mocking Erika, it really leaves you scratching your head. Some “true friends” they are, huh? Rinna laughing like that — sure hope she *OWNS IT* later on.

Later, Sutton refers to herself as a mall cop as she wheels into Kyle’s room on her scooter. Kyle explains to Sutton and Dorit that Kathy doesn’t feel great, so she is going to stay home for the evening. They begin to analyze Erika’s story about Tom “allegedly” being unconscious for 12 hours, and it just simply does not add up. Sutton can’t help but be Nancy Drew. These women are just too dumb, and they allow Erika to spin tale after tale, almost out of fear!

She may be overwhelmed, but Erika has her latex on for dinner. And according to Rinna, “It’s a good day if you have your latex on!” Erika laments to the group that she wishes people would step up and help Tom (yes, he may have done SOME good in his life, but hot damn, as of late, he is a monster). These women are dead set on proving that Erika is innocent, but it seems totally phony. Sutton, thank you for pointing out that they treated Denise like absolute garbage last season, yet now here there are, fake laughing and a*s kissing criminal Erika. I mean, telling her son that “mommy’s broke and is paying the bills” when asked about her risqué Instagram posts is not NEARLY as funny as Kyle, Dorit, and Rinna make it out to be with their shrieks of laughter.

Kyle, Kyle, Kyle. Why does she need to point out that Sutton is quiet this evening? Rinna tells Erika she is so fun tonight, and Kyle and Dorit pump Erika up full of BS. Kyle goes as far as discussing Erika’s stint on Broadway as if Erika “I’m the best one in this group” Girardi needs a pep talk. She seems in good spirits considering what a sh*tshow her life is. Hell, Erika even chatted with Sutton. Yes, you read that right.

The next morning, we see why Kathy could not be a full-time Housewife. She could never be up in time for call time. Garcelle joins Sutton for a morning chat, and Sutton shares how shocked she felt when Erika talked to her (normally) the night before. Garcelle warns Sutton to be careful and see how the day goes with Erika since Erika’s emotions are all over the map… just like Tom’s hidden stolen money.

Rinna calls the ladies, and they talk about how great Erika was the night before. The same Erika who has a glam squad and is complaining about needing plastic surgery is also evidently so broke that she needs to pose for almost nude pics on Insta. From her room, Erika hears the ladies loudly talking and warns them by shouting over the balcony. Talk about getting shook, Sutton.

It’s time for some float-fit yoga for Crystal and Rinna. Garcelle and Sutton heckle the ladies as they attempt to engage their cores and eventually fall into the pool. Kyle and Erika are busy playing pickleball, and both groups are equally terrible at the activities, but it’s nothing that some booze can’t fix.

When Crystal and Rinna emerge from the water, Sutton explains she isn’t sure if Erika’s trying to make amends with her. Crystal mentions that her birthday is the next day, and Garcelle comes in with a segue from left field. She asks Crystal if she’s ever been with a girl, and to that, Crystal jumps on Garcelle. Talk about violating!

In the meantime, Erika shares with Kyle that there are plans to evict Tom, and Erika is out there rebuilding her life with zero dollars. Yet… there she is with a glam squad.  Erika is still more concerned about herself than the victims, and here she is calling herself brave.

Kathy is back and refreshed in time for the boat dinner. While making their way onto the boat, Erika, dressed as Elton John, apologizes to Sutton (kinda). Although Sutton really wants to accept it, she knows better than to walk in with open arms. Erika tells the other ladies that it’s not kumbaya, but it’s a step in the right direction. WTF is with Kyle pretending she knows how to handle Erika — telling Sutton to sip her drink and not say anything. Essentially, be grateful Erika has chosen to be your friend again. Who knew Kathy’s trip would be the thing all these women need to kiss up to each other — er, to feel better?

Garcelle suggests playing “never have I ever,” and her first statement is “never have I ever stolen anything.” The shade, Garcelle! Erika stares icy-eyed and later states, “No admission is no admission.” Turns out you learn something new every day with this group, and I can honestly say I feel awful for poor Captain Troy listening to talk about Kathy being a lady in the streets and a freak in the sheets.

When Erika starts taking a scary turn, Sutton attempts to steer the conversation in a different direction. But as Sutton states, “Honestly, I’d have a lot of rage if I lost all my money, too.” Buuurn. Sutton becomes emotional with Kathy as she discusses how Erika was a friend who so quickly became a foe. She further says that she can’t NOT ask questions and their relationship is still a bit rocky, despite the recent apology. It’s pretty symbolic that Sutton is there crying while Erika is out on that net having the time of her life. Typical. And so on-brand for Erika.