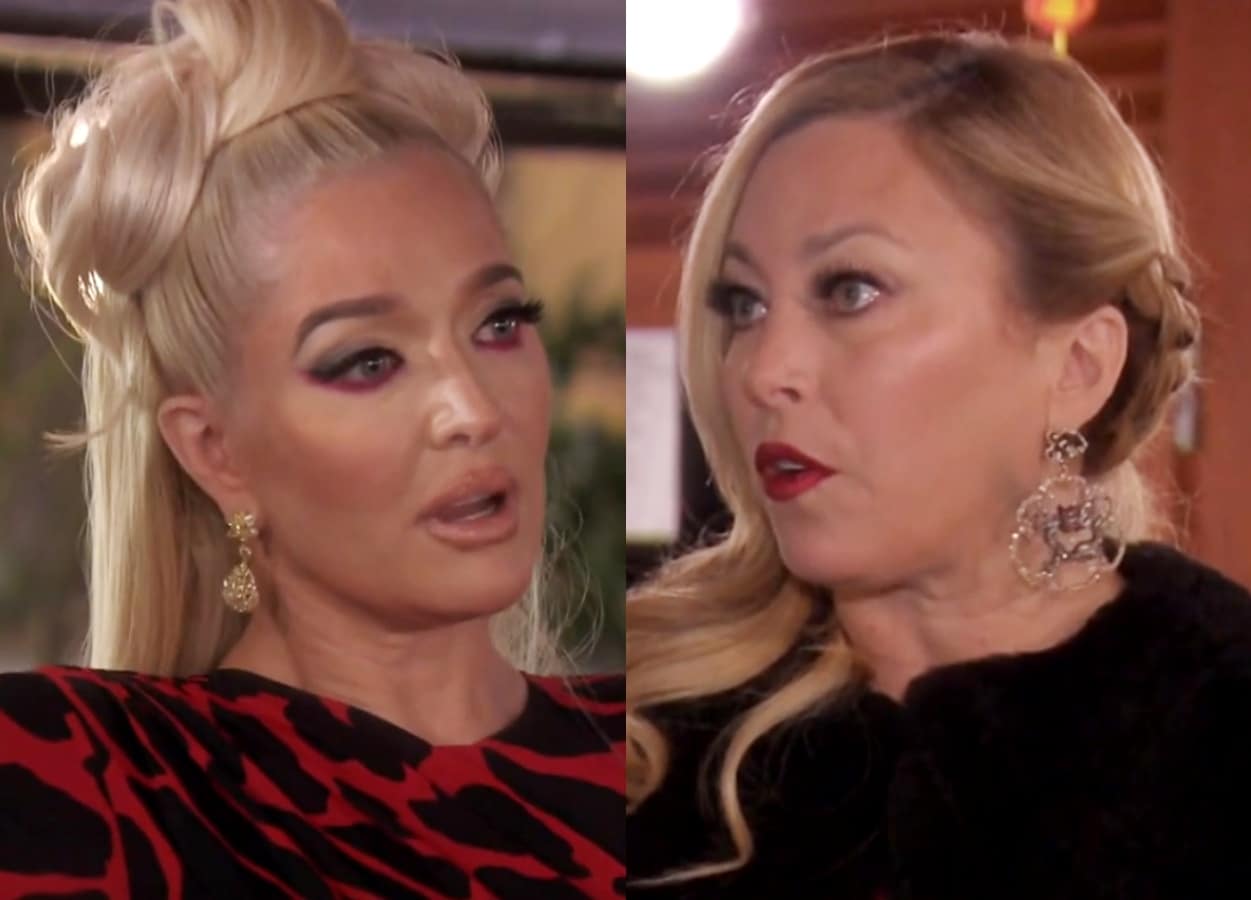 Crystal has decided to throw a huge celebration in honor of Chinese New Year on the season finale of the Real Housewives of Beverly Hills. Will the women put aside their differences and embrace the fresh start of the new year?

Because Crystal cannot take the women to China this year, she guesses that this restaurant should be a good enough taste of the culture. She brings Erika to the space she is holding the event in and casually mentions that movies have been filmed there — ya know, like Kill Bill, NBD. Erika muses about what she should wear (#priorities), and Crystal reminds Erika that one of the superstitions of Chinese New Year is to not fight. LOL at trying to get these women to behave.

Sutton hobbles on over to check out Kathy’s new build. This is one of Kathy’s “projects,” and she is building a brand-new construction that will probably go on the market for between $52-$53 million dollars. OMG — in the words of Sutton, “I don’t think I’ve ever felt so poor in my life.” Kathy pretends to care about Sutton’s run-down of how she thinks things went in Del Mar. Sutton has some apprehension about how things were left with Erika, as she does not fully trust Erika’s apology. Kathy makes it clear that Crystal’s party is certainly not the place to ruffle feathers, and Sutton heeds her warning.

Kyle, her $22,000 bag, Erika, Dorit, and Rinna (aka the mean girls) meet up for some fun. Erika plays the victim again (her favorite role) and wonders when she gets to punch back at the haters. Kyle can’t help but insert herself and stir the pot, and so she reminds Erika that Sutton is not buying Erika’s car accident saga.

Kyle, stay out of it. She has become the ultimate sh*t stirrer and is clearly using Sutton as a shield to ask the tough questions she wishes she could. Did anyone else catch Erika try and *REMEMBER* the story she told about the car accident, even though her “story never changes?” Erika drops quite a few “umms” while trying to think back to which version of the story she told this group. LOL. And when Erika begins to feel like she is losing control, she pulls her ultimate move and becomes the tough girl, threatening to ask Sutton, “B*tch, do you want to get socked in the f*cking mouth?”

Kyle wants to know about Erika’s Instagram posts, “as her friend,” and Rinna cackles about how sometimes it feels good to push the limit. Rinna and Erika toast to being damned if you do, damned if you don’t, and I can’t help but wonder where this sweet, supportive Rinna was last year when Denise was on the chopping block?

Garcelle shares that she went on a date with that super hottie, but he just wasn’t her type… since he actually wore a shirt and she couldn’t see his abs. Garcelle is thinking about ditching this dating coach and would simply rather wait around for Brad Pitt. A girl can dream.

How in the world does Erika keep Mikey, her creative director, AND her glam squad if she cries that she is so damn broke?! While everyone is busy getting ready for the new year party, Crystal calls Sutton to tell her she is having a good time with her lately (only on a Real Housewives franchise does a call like that exist). I guess Crystal is really hoping to channel good energy into this event.

Crystal explains that Chinese New Year is all about family. Although no one can replace her late father, she approves of her mother’s boyfriend and is happy that her mom is there to celebrate. Hope she warned this lovely couple about the rest of the people invited…

Kathy arrives with her fun dinner guest, Elliott. Rinna (donning a RIDICULOUS wig) recognizes Elliott right away. Rinna was left at the table with Elliott at Dorit’s infamous dinner party where Rinna accused everyone of doing coke. Ah, memories.

Garcelle cannot even recognize Rinna in that lewk, and Dorit realizes as soon as she sees Elliott that she better not make any trips to the bathroom so as to avoid any Rinna accusations.

Later, Garcelle pulls Rinna aside, and they make silly small talk until Garcelle brings it back to the important stuff. Rinna thinks they are “still walking” but have come a long way since their falling out. Garcelle has high hopes that Rinna will reach out to Denise at some point. I thought we’ve moved on from that! Rinna hesitates, but no one can tell Rinna what to do, and she states that she will (maybe) smooth things over if there ever comes a time. (Translation — never).

Wait — are Kyle and Erika rocking the same hairdo? When Erika sees Sutton arriving, Erika goes back to being cold as ice. Looks like this relationship is not progressing. It is clear that Erika is not talking to Sutton again because of what Kyle told Erika. Kyle plays dumb and cannot fathom why Erika is giving Sutton the silent treatment, but Kyle had no problem throwing Sutton under the bus the other night. Sutton promises to let things go in the new year, but she states, “I’m like Tom Petty.  I won’t back down.” Dead.

Crystal’s husband makes a fitting speech where he says, “A true friend is someone that does not disappear when the problems come,” and naturally, the camera pans over to Erika doing her best soap opera serious face.

Crystal informs the ladies about all things one should do in preparation for the new year, and Kyle jumps all over it when Crystal talks about sweeping problems under the rug.  She yells, “Sutton, this is not a metaphorical conversation of trying to sweep things under the rug.” Sutton kills Kyle with her eyes, but she uses that as a segue to let Erika know she does not want any ill will going into the Chinese New Year. There is the world’s most awkward silence, like five Mississippis, and Erika has “nothing to say.” What else is new?  Sutton really puts out an olive branch and then questions why in the world she is trying so hard with Erika.

PK tells Erika that her silence was “genius,” and when Erika tells PK she has bigger fish to fry, he replies, “Well, they’re all fish.” Whose side are you on, PK?

The girls gather around and try to get Sutton and Erika back on the same page. Erika claims she thought she was friends with Sutton, and Sutton asks for a one on one with her. Erika thinks she oversees this argument, but Sutton reminds her that she, too, had been hurt throughout their messy fights. Erika repeats that she needs a minute, and it looks like the door is back to being shut.

In the end, Sutton is stronger than she realizes… and I have noticed she has stopped using her beloved face roller, at least in public. It turns out that, six months later, she has finally moved out of Kyle’s rental and into her new place.

Kyle thinks about the friendships within the group this year, and she continues to stay true to Erika. Her relationships with her sisters are stronger than ever, and she even has Kim’s phone number now!

Dorit doesn’t like the confrontation within the group but believes that sometimes it is necessary. Also necessary is adding some ready-to-wear clothing to her line because who doesn’t want to wear an outfit named by PK?

Rinna claims she tries to be a better version of herself (that would explain the wig obsession — perhaps figuring out how she can be less of a snake?), and she has finally approved of Amelia and Scott Disick’s relationship now that it’s over…

Garcelle feels as though she made a breakthrough with the group and has been treated better because of it, but still is not back in the dating game… just yet.

According to Crystal, you can’t force forgiveness and she is grateful to have made it through the highs, lows, and bad fashion choices this season (hello, leather pants!).

Erika knows her fight is far from over and she is tired of explaining herself.  She claims she has been honest and STILL has not mentioned the victims who are owed tons of money. Classic.

WHAT ARE YOUR THOUGHTS ON THE RHOBH FINALE?