Home Real Housewives of Potomac News RHOP Recap: Ashley Feuds With Gordon as Mia Shades Her, Plus Gizelle is Dating Again, and Karen Shocks the Ladies With an Epic Invitation

RHOP Recap: Ashley Feuds With Gordon as Mia Shades Her, Plus Gizelle is Dating Again, and Karen Shocks the Ladies With an Epic Invitation 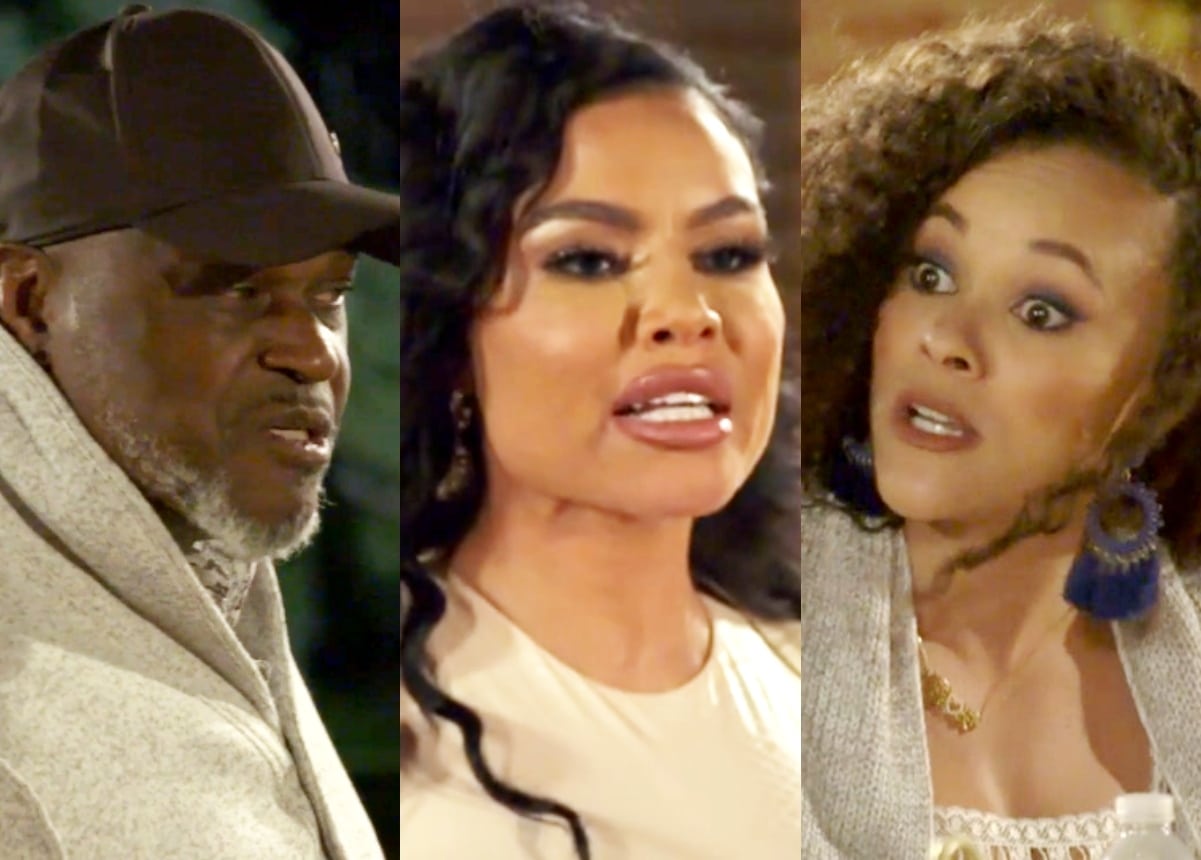 We are back this week for more of the GVO trip, which really should be titled GO (Get Out)! Let us watch and see what will boil over this episode on the Real Housewives of Potomac first — crabs or Ashley’s patience with Gordon?

Gordon and Ashley are still going back and forth in the van over him waking her up. She is exhausted from having three babies at home, and she just cannot engage with Gordon’s histrionics. How do you distract someone who is annoying someone else? Patrón!

Back at the house, Ashley shares with Wendy that she has lost patience with Gordon and his snide comments. She went on this trip to escape her insolent husband, not to have to deal with another husband who is getting in her crawl.

We are finally here for our Caribbean crab boil! Karen and Ray are going to enjoy every moment of this evening, and they decide to electric slide their way in. The table setting is lovely for this crab feast, and production must zoom in on the salad bowl as if to warn us of its power. Mia appreciates how fancy this crab boil is since she was expecting newspaper and bibs.

Askale thinks it is “romantical,” and Dre just kind of mumbles to himself, which I am translating to say, “When is this sh*tshow going to end?” Wendy, who is suffering from real delusion, plans to keep this final dinner cute since she knows where she stands with Gizelle and Robyn. She is thrilled that Eddie has remained on-script this trip and has been nothing but the doting husband.

Gordon gets chilly, and he heads inside to snag another cocktail and tells Mia to hang out with her friends. Karen then tells everyone to open their invites to their vow renewal while outside. Are there butterflies in these invites? I love the movie Bridesmaids and they do the same thing for the invite.

Ashley asks Eddie if he has had any conversations with his parents. Wendy claims to want him to make amends with his parents and is upset they missed their wedding. I am not so sure that is true since she would lose some control of her beloved husband. I agree that Eddie’s parents have missed so much since they have not been talking to their son, but I am sure it is more about their grandchildren than missing their wedding.

Gordon comes back outside, and Ashley is still peeved when he gave her crap about sleeping on the bus. Ashley asks Gordon if he has Alzheimer’s when he feigns innocence about picking on her. Mia does not think that Ashley should act ageist by suggesting Gordon has memory issues since she has an older husband as well. She then very shadily asks Ashley, “Where is your husband?” Ashley spits out that he is home with their children, then Mia snarkily says, “Are you sure?” BOOM, Ms. Mia is definitely up-to-date on Michael’s extracurricular activities.

Candiace is glad that for once she is not entangled in this mess. She is content to just keep her yapper shut by shoving some corn and potatoes in it. Side note: That is one of the things I love about these ladies — they like to eat. EXCEPT, I could forever do without watching Wendy eat.

Mia takes Ashley’s comment as wishing G has Alzheimer’s. My darling, that is such a stretch and just as bad as the assertion that Gizelle was wishing Ray death. Mia also throws in for good measure that Ashley just really needs a big black d*ck. She also thinks Ashley needs to take her tired a*s home to the troll under the bridge Michael.

Ray wants a bachelor party, which I find to be a little suspect or producer-driven. Wendy wants Karen to jump out of the cake to grant Ray’s wish. Ray looks a little disappointed that a naked woman did not jump out. Karen would not dare do that with G’s revolting tongue slithering around.

Wendy gets asked by a producer to give herself a grade for her hosting abilities. She gives herself a 10 since she believes she has put the green-eyed bandits in their place. Robyn, in her ITM, thinks that Wendy was a sucky host, and she would have been better off staying home keeping an eye on Juan and Michael.

We now have packages being delivered to all the ladies. Haven’t these ladies ever seen butterflies before? Gizelle and Robyn both think their boxes contain mothballs. No, ladies, mothballs are used to repel pests, not for party invites, but maybe Karen did stick mothballs in their boxes?

Mia and Gordon discuss how Valerie watched the kids when they went out to dinner for their anniversary. She kept calling Mia since she could not figure out what to make for dinner for the kids. Valerie got into an argument with Gordon over this. Mia is troubled that their kids witnessed the argument between Valerie and Gordon. I think this delicate relationship has been on television too soon since it is still in its infancy.

Gizelle talks to her girls about bringing a date to Karen’s vow renewal. She claims to be casually dating but will not share with whom when the producer inquires. Gizelle’s girls want her to have someone special — so she does not die alone. Side note: I loved when the girls said their house was a shack when they moved in. Gizelle thinks her chandeliers with her purple confections sprinkled in make her place an opulent palace.

Gizelle is having casual encounters with whom? Doesn’t that sound nefarious to you all? Grace admits she does not have anyone to look up to or aspire to in relationships. The girls do not even remember their parents being married. Grace compares Gizelle to a vampire. Vampires are undead creatures that can cause mischief or deaths in their neighborhoods. They wear shrouds and were often described as bloated. Hmm, Gizelle’s girls might be on to something here!

Ashley is meeting with her therapist, Dr. Donna, and she brought baby Dylan with her. She admits to having separation anxiety with her kids. Ashley shares that she was able to take a trip away with her friends. She shares that Michael is not interested in having sex right now. Michael claims he does not have a sex drive now. Darling Ashley, he is just not that into you, but others he is very much into…

Ashley is afraid that the past is repeating itself since she is at the same period when Michael cheated after Dean. She has reason to be concerned with that dirty Aussie dog Michael who cannot stay in his own yard.

Wendy’s mom Susan thinks her process created successful children. She would not change a darn thing in how she raised her kids. Wendy acts like her life would have been so different if she followed her dreams instead of her mom’s. Are we being led to believe that she would have been happier with a life that did not include four degrees and the accolades associated with it? Sorry, dear Wendy, there is no candle line that would give you the bragging rights that you constantly rely upon now with your doctorate title.

Susan gets offended that her daughter wants an apology for how she was raised. She throws on her sunglasses and wants to call an Uber. Susan does not appreciate her daughter trying to shame her for her parental influence. She thinks that Wendy should be glad she is a doctor. I am sorry — this scene was contrived and just fluff.

Ashley decides to get a hotel room to try to seduce Michael. My stomach is already churning just preparing myself for this scene. Michael used to own this Watergate hotel. Ashley discusses the trip, and Michael expresses how he does not want to talk to Candiace and that idiot (Chris). She tells him that Chris wants to try to develop a friendship.

We now get into this scene that is meant to be sexy but comes across as extremely forced and awkward. Ashley tries to give him a lap dance, and it does not appear that these two have any chemistry. Did Michael just mention the buttons on the toilet when they were headed to the bedroom? Michael expresses how he would rather hang out with Juan, and it is creepy how he is almost salivating! #YUCK

Gizelle is now seeing Dr. Ken to discuss what is going on in her life. She is like an emotionless robot. Dr. Ken asks Gizelle, “Why did you reconnect with your ex-husband?” Gizelle claims that Jamal looked at her with respect and drew her in again. Dr. Ken wants Gizelle to have honest conversations with her girls. It is an issue when your kids view you as being cold. He tells her he finally sees some vulnerability — not sure how he concluded with that!

Next week, it is the season finale, and we are attending Karen’s vow renewal. Robyn and Juan have another conversation about expanding their family, and it does not go over well. Have a wonderful week, and let me know your thoughts on the episode in the comments!