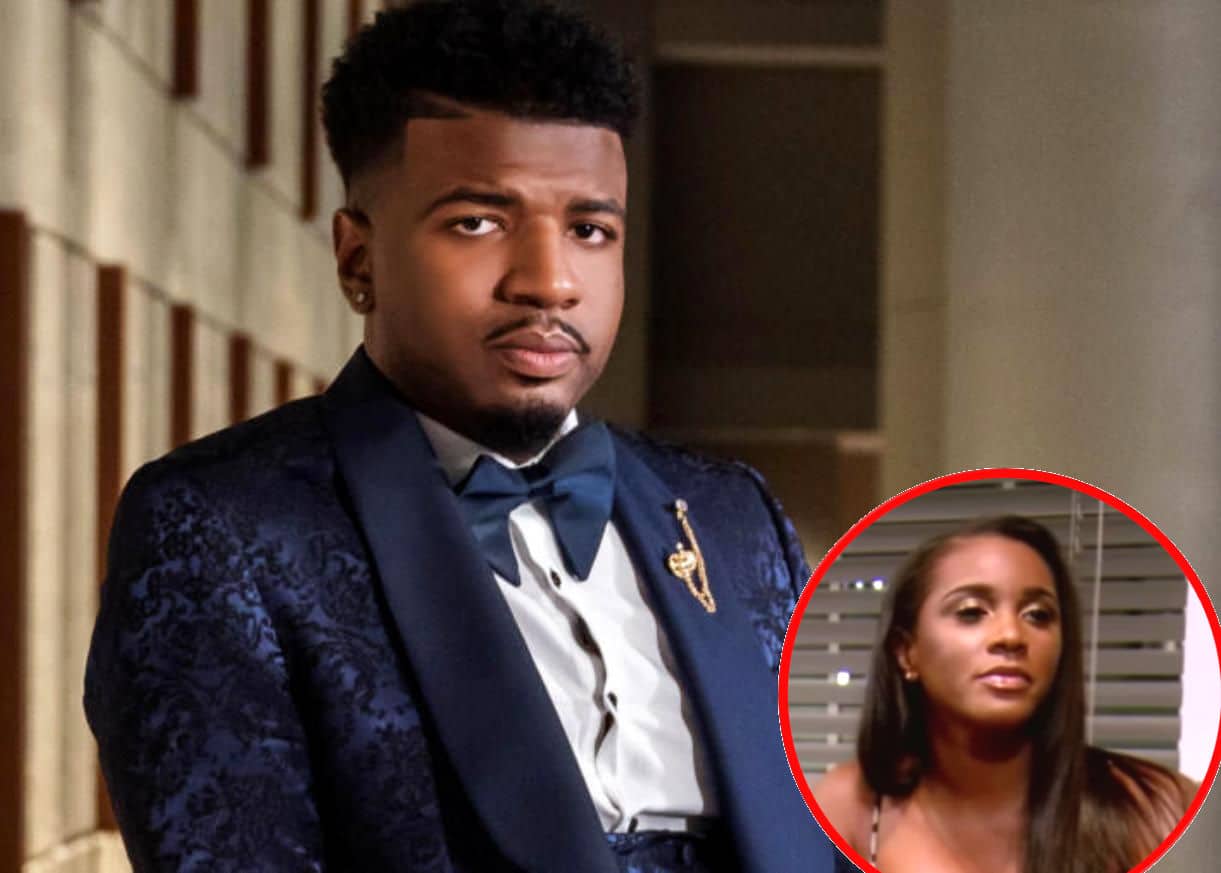 Married At First Sight season 12’s Chris Williams is at it again. While his season may have come and gone, this MAFS alum is far from finished with the spotlight.

In a shocking revelation posted to his Instagram, Chris dropped the bombshell that his ex-fiancée, Mercedes, was allegedly never really pregnant.

Chris claimed that he had been lied to and felt that it was an attempt by his ex to get back at him for going on the show. Chris revealed that the pregnancy test he had been sent as proof was actually a “dummy test,” or a test that would show a positive result no matter what.

Chris went on to say that in speaking to some of Mercedes’ exes, he had discovered this was not the first time she had allegedly done this type of thing.

By the end of the season, Mercedes had allegedly had a miscarriage, but Chris revealed that was a sham too. Chris stated that on the night he went to the emergency room to see his ex, all he saw on the doctor’s report was an account of high blood pressure, and nothing was said about a miscarriage.

Chris claimed he had spent over $10,000 to ensure Mercedes and the future baby would be comfortable, including a $2 million life insurance policy he allegedly had taken out.

The post was extensive and covered a range of accusations he lodged against his ex-fiancée, Mercedes. 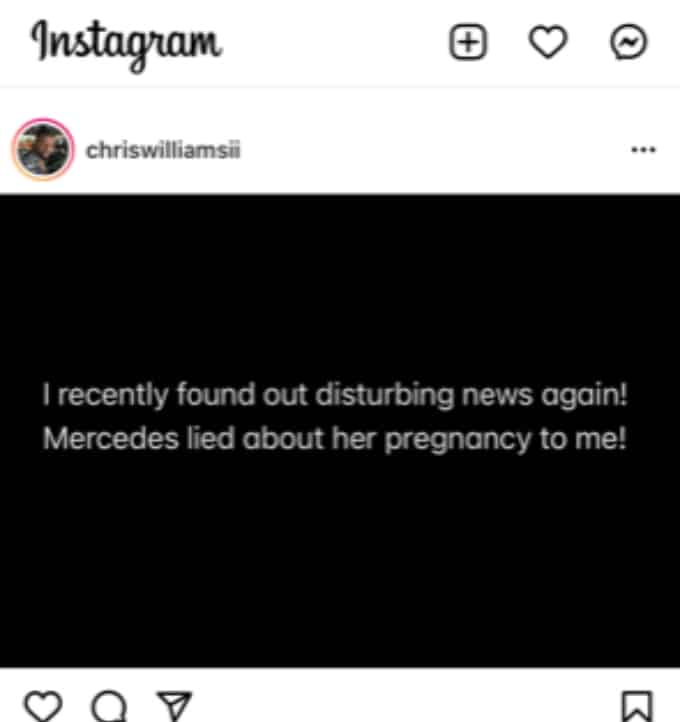 Chris posted the news and added a very lengthy caption going into full detail of the situation. 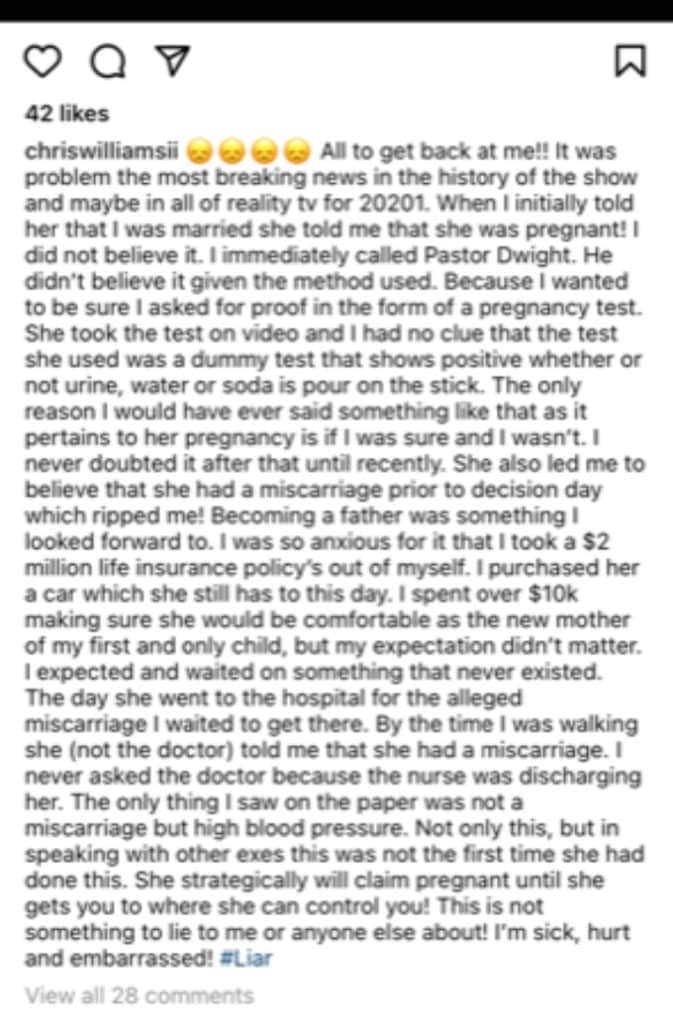 But Chris wasn’t finished yet. Not only did he reveal all of this sensitive information in an angry rant against his ex, but he then took it all back!

Not long after posting all of this juicy gossip, Chris went back in true Chris Williams fashion and deleted it all. He added a story to his page saying that he should never have revealed the intimate details of the situation, and he added that he has known Mercedes for a lot longer than he had known his MAFS wife, Paige Banks. 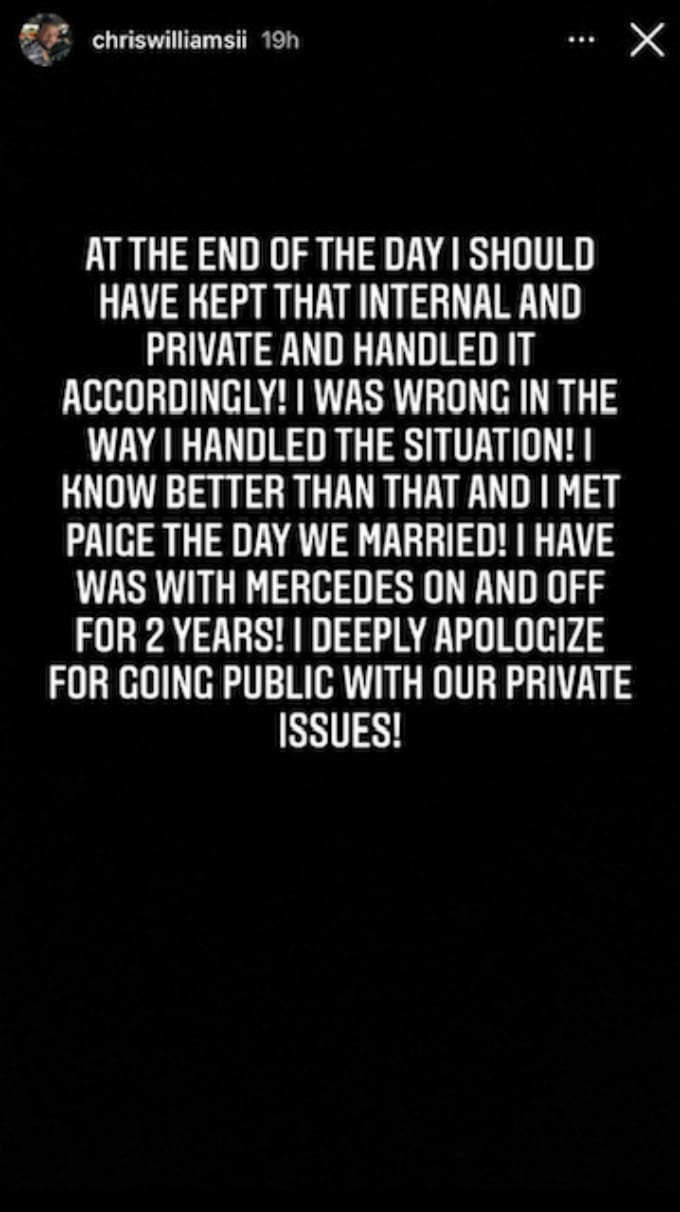 MAFS Chris Williams takes it all back. Credit:@chriswilliamsii/Instagram

Chris implied that he does not regret his decision to choose Mercedes over Paige during the Married At First Sight season.

During the season, Chris revealed his ex-fiancée was pregnant and that he would be leaving Paige to get back with her. Obviously, the couple was not one that was successful out of the season 12 crop of newlyweds.

But following his announcement, Chris ping-ponged back and forth between Paige and Mercedes, saying he wanted to be with Paige one day, then Mercedes the next. One day, he’d say Paige was wonderful and Mercedes was awful, then he’d flip the script the next day. It was hard to keep up. In fact, we hadn’t seen drama like this since season 10’s Brandon and Taylor, but once Chris arrived on the scene he was awarded the title of the “king of chaos” by fans.

So it is really no surprise that Chris once again made a big reveal via social media that he almost immediately changed his mind about.

We are sure we haven’t heard the last from the MAFS season 12’s “king of chaos.” The only question that does remain, though, is what will he do next?