Home Real Housewives Of Salt Lake City News RHOSLC Recap: Jen Lashes Out at Lisa Over Designer Drama, Plus Meredith Freaks Out After Mary’s Ex Church Member Warns Her to be Wary of Costar

RHOSLC Recap: Jen Lashes Out at Lisa Over Designer Drama, Plus Meredith Freaks Out After Mary’s Ex Church Member Warns Her to be Wary of Costar 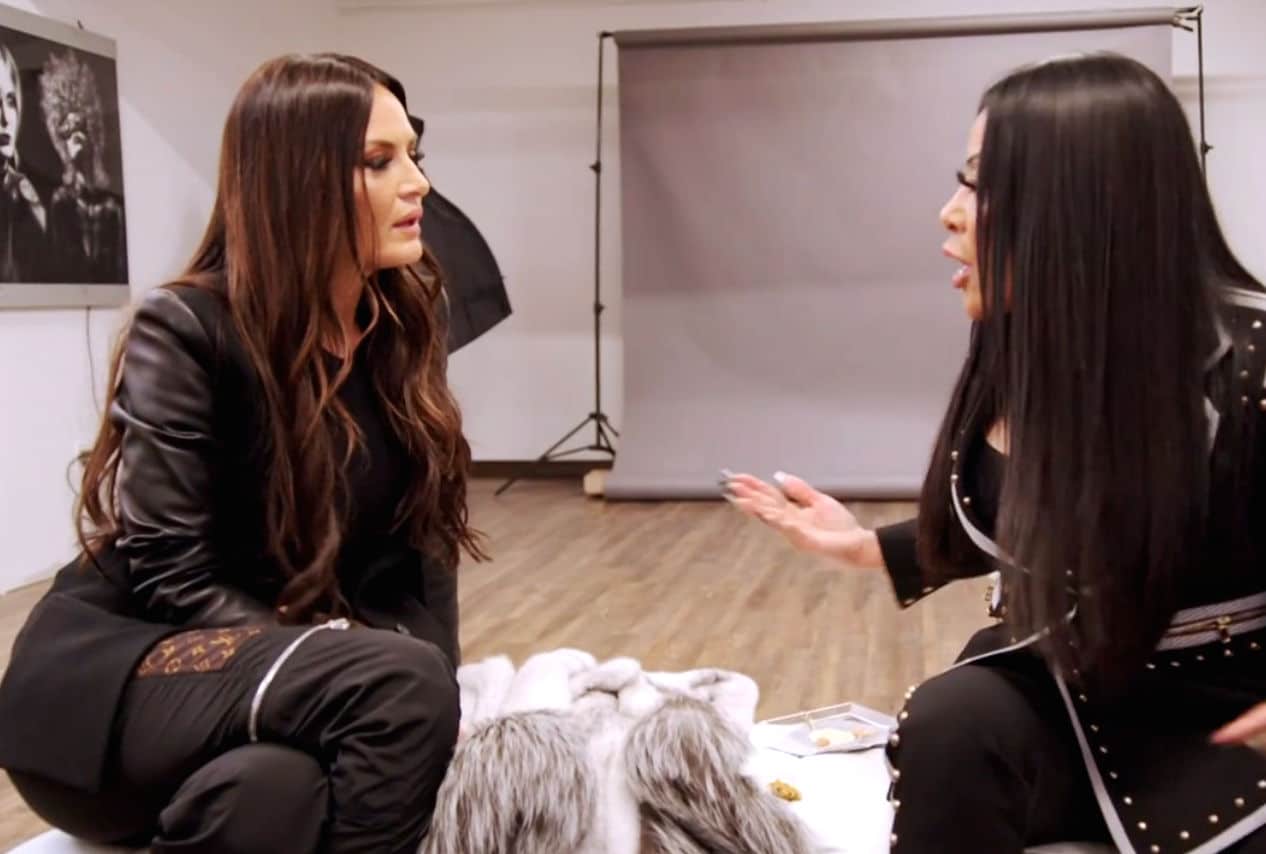 On this episode of The Real Housewives Of Salt Lake City, calculated and selective is the name of the game. One minute these women are friends, the next they are finding out questionable information and are left filling in the blanks…

Fresh Wolf is a men’s grooming line that Lisa and her husband created with their sons, Jack and Henry. Although Lisa never wanted another business, it has taken off. Jack has hopes to have this big event to help donate to foster care, and it’s a subject that hits close to home since Lisa’s husband was adopted at a young age. This intimate, 30-person event will be invite-only, and it’s for those who have supported and backed Fresh Wolf from the very beginning.

Ms. Mary is dining with Heather and Whitney. Mary admits that she snapped at Lisa first during snow tubing. She felt triggered by Lisa and becomes emotional when she remembers that Lisa questioned her. Mary goes deep and cries because her mother always questioned her and never okayed her marriage to Robert Sr… Mainly because her mom wanted to marry Robert Sr. for the security and lifestyle that he could provide. WTF — did mother and daughter fight over this man?! The step-grandfather to Mary… the stepfather to Mary’s mom — is this the twilight zone? Mary states that her mom did not believe her the way that Lisa did the other day. Although she was upset about the altercation, Mary explains that she moves on and won’t live in the past with Lisa.

I love how Lisa lets her son run the show during this photoshoot, although it seems like Lisa coached Jack on what to say. Lisa is such a proud mom and is bursting with how far Jack has taken the brand Fresh Wolf. Speaking of fresh wolves… “Auntie Jen” rolls up with the “fun.” Aka, she brought two wolf head hats to the photoshoot.

As the set breaks down, Lisa and Jen sit and chat. Lisa is concerned about Jen and her dysfunctional relationship with Heather. She is also worried about Jen and her stress level ever since audio got leaked from a designer deal gone bad. The name of the designer continues to get bleeped out (ugh), but if you remember, a few months back, Jen was caught verbally assaulting her employees and threatening to beat up a fashion designer because of miscommunication.

Jen has been trying to save face regarding this recording, and she claims she once again trusted someone deeply because he is from Hawaii and she felt connected to him. This designer evidently took Jen’s “kindness” and set her up. Jen freaks the hell out on Lisa, and Lisa takes this opportunity and runs with it. She tells Jen, “I see him getting gifts by Whitney on social media.” It’s weird that Whitney gave gifts to this designer, but Jen screams that she doesn’t “give a f*ck,” despite Lisa pressing that there should be accountability. Love how when Lisa breaks a nail mid-meltdown, both she and Jen break character for a moment. As soon as they acknowledge the nail break, Jen is back on her fake tears and yelling. One takeaway from this conversation: Lisa Barlow is a HUGE sh*t stirrer. Soo messy.

Bladders Club?! What is happening here? All I see is Whitney doing strange moves with her brother all whilst on rollerblades. Whitney finds out that her brother talks to their father once a week and that her dad is “keeping off the grid right now.” Whitney states that she has not talked to him for six months, but she is irked because she was the one who supported him through his sobriety. Whitney explains that something is gone with her dad, citing an incident where he babysat her children and lost it on a delivery man. Her brother tries to soothe her by telling Whitney that just because they “are blood, doesn’t mean they are family.”

Meredith and her daughter, Chloe, sit down for some lunch with Heather and her daughter, Ashley. They start talking about colleges, and Chloe fills Ashley in on some basics. Heather insists that she was not a good-time girl, but she did travel with a little person for a vacation. WHAT.

To change the subject from that incredibly questionable tale Heather has shared, Meredith explains that she has rented out a seven-bedroom house in Vail. Because Meredith’s family won’t be able to go, Heather has invited herself and the “usual suspects” for a mini vaca. Things between Jen and Meredith are still a bit rocky, particularly because they, as a family, have been hurt for over a year by Jen’s antics, but Meredith has decided that Jen can come… if Heather invites her.

It’s the night of Jack’s event, and the only familiar Housewives’ face is Meredith’s. Interesting considering Lisa has been so buddy-buddy with Jen lately, huh?

In the meantime, Jen pays a visit to Heather’s house. Heather shares that her dating life is boring right now, but luckily, Jen brought some gifts — and by gifts, I mean the lady raided a sex shop and went wild. Jen has high hopes of spicing things up for Heather, starting with “d*ckhead hoopla.”

After some fun and games, Heather invites Jen to Vail, on account of Meredith’s house. Jen is excited and wants to be able to get a chance to figure out what the hell is going on in her relationship with Meredith.

Jen explains that Lisa brought up the fact that Whitney sent products to the designer Jen butted heads with. Heather finds it “highly sus” that Lisa pointed out Whitney was not a good friend to Jen, and adding fuel to the fire, Heather shares that she just got off the phone with Whitney and Lisa made one helluva move. Whitney was invited to Jack’s Fresh Wolf event, but Jen was not. Jen did not know about the event hosted by her so-called friend Lisa. Perhaps Jen was not supportive OR did not donate to the foster charity… perhaps that’s why she did not get the invite to the event? When Jen finds out that this event is for foster care, she freaks out. Her aunt adopted two kids from foster care, so Jen feels like this is a calculated attack.

Over at the event, Jack is an eloquent speaker with his little Louis Vuitton crossbody. How old is this kid again? Lisa tells Meredith that Jen came to the photoshoot and that she upset Jen by asking about the designer blowout. As Meredith and Lisa talk, out of nowhere, this guy Cameron jumps into their convo to say goodbye. This also seems “highly sus,” amiright?

It turns out that Cameron is one of Lisa’s “very good friends” and is the connection to Mary. Meredith is left talking to this Cameron guy, who no longer attends Mary’s church because he feels as though Mary and her husband have done some awful things. He cryptically says he hopes for healing for everyone and that he once liked Mary, and he warns Meredith to “just be careful.”  Meredith is doubtful since her experience at Mary’s church was such a feel-good time, but Cameron explains that things change if you stick around for too long.  Cameron further states that the issue is Mary’s story to tell and leaves us on the edge of our seats, trying to figure out what exactly Cameron was insinuating.

How many times can Lisa ask Meredith if she is OK after her convo with Cameron? Meredith feels icky and Lisa tries to fill in the blanks. Cameron used to be a preacher at Mary’s church, but Meredith is confused by his cryptic conversation. Lisa believes that Cameron has experienced some “real trauma” and that she doesn’t want to speculate about Mary’s church, especially not at the big event. Seems like Cameron was a plant…