Home Real Housewives Of Salt Lake City News RHOSLC Recap: Jen is Back and Slams Lisa for Abandoning Her After Arrest, Plus Whitney Finds Out More Info to Take Down Mary

RHOSLC Recap: Jen is Back and Slams Lisa for Abandoning Her After Arrest, Plus Whitney Finds Out More Info to Take Down Mary 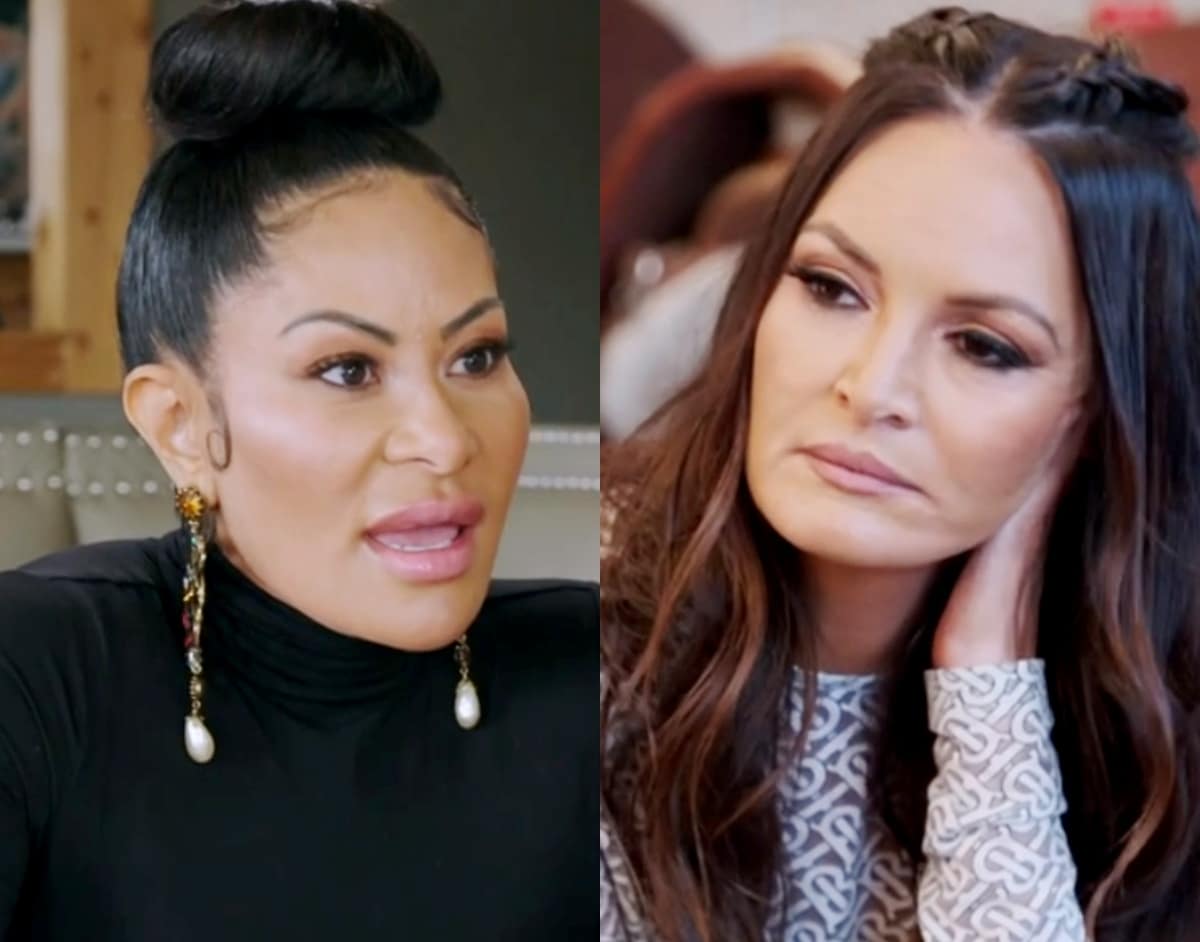 Whitney and her whisk, in the words of Lisa, had quite a good time stirring the pot in Vail, and Mary feels disrespected that she was put in the same category as Jen. On this episode of The Real Housewives Of Salt Lake City, Jen resurfaces and Whitney keeps digging for dirt on Mary…

Out of nowhere, Jen — and her new phone number — starts reaching out to all the ladies. Lisa avoids and ignores the texts and calls, whereas when Jen invites Heather out for a steakhouse lunch, Heather agrees wholeheartedly. Lisa explains that she is going to “tread lightly” when it comes to Jen as she is unsure if a friendship is there to be saved…

Heather embraces Jen and they sit down for lunch. Jen is grateful that Heather seems to be a “true friend,” and she is happy she has shown up for her when she needs it the most. Jen tells her story and explains that the voice on the call she received in the Beauty Lab parking lot was not Sharrieff’s. She started driving home until a white minivan and a black SUV pulled up. Naturally, Jen thought she was being kidnapped, but then she realized that after being handcuffed to a chair in a breakroom, she was in trouble with the law.

Jen claims she did not know the Feds were at her home and states that her son was held at gunpoint and handcuffed. Jen explains that she is sick just thinking about the fact that these officers went to her home with guns pointed, and she attempts to cry, although her face no longer allows for real emotions. Jen’s family is here from South Central to get away from the violence, and yet here they are in Park City, right smack in the middle of the violence, all because of Auntie Jen.

It would be nice if Jen took some accountability for all of this. Instead, she is deflecting and saying stuff like, “It’s really unfair the things that the government can do to you without having any real proof.” Jen tells Heather that when she saw Stuart arrested too, he said, “I’m sorry,” which seems odd and as if he is taking the responsibility.

Jen claims that Stuart’s businesses have nothing to do with her, but alas, just three weeks ago, Jen stated, “While you make me money, I’ll feed you.” Even Heather picks up that it seems like Jen is trying to distance herself from Stu for whatever reason…

Heather wastes no time throwing Lisa under the bus by telling Jen that Lisa was stressing upon hearing the news of Jen’s arrest. Heather tells Jen that Lisa was immediately on the phone with her SIX lawyers, and she seemed more concerned about her own reputation instead of Jen’s well-being. Heather further states that Meredith is officially through with Jen, and Jen can’t understand why Meredith would be done with her because she apologized. OMG, Jen… Jen expects Lisa and Meredith to apologize to HER when she is proven innocent, but time will tell.

Meanwhile, Whitney is busy buttering up her husband, Justin, over some Chipotle. She questions if Justin thinks her business is a hobby, and he puts the fire to Whitney’s a*s to make some money. Whitney is stressed about the launch of her rebrand, and she has applied for a million-dollar line of credit. Justin will have to co-sign, and you can tell the guy is p*ssed. Justin straight up says that with their age difference, he’s gonna be gone before Whitney. He wants to be sure he has enough to take care of his family when that time comes.  However, right now, Whitney admits she is bad with money.

Mary has hired a company called Nice and Neat Homes to help her get organized. We all know that Mary’s a bit of a… hoarder… and her closet is absolutely out of control. Mary wants to be clear that she doesn’t have nice things because she takes peoples’ money and that all the things she has, she has bonded with. Looks like this organizational company is gonna be mighty busy at Mary’s house…

Lisa explains that she has been riding horses since she was four years old and so she invites Meredith for a ride. After, the ladies have some tea and wind up spilling some, too. Lisa shares that she is unsure what she wants to do with Jen, especially now that she has reached out to her. Lisa makes it clear that she has seen inconsistencies with Jen and their “one-sided friendship,” and she is exhausted from giving all her energy to Jen. Seems like Meredith is engaging in THIS conversation… She understands why Lisa would need a break from Jen.

Lisa further states that she is tired of being Whitney and Heather’s punching bag. She is angry about being accused of everything, but Meredith tries to show Lisa she can’t place all the blame on Whitney and Heather. She reminds her that the group’s issues are everyone’s responsibility. Lisa is hot and bothered and refuses to take any responsibility for Heather and Whitney’s lies.

Jennie has decided to take her daughter, Karlyn, out for a Vietnamese food tasting since she is planning on having the ladies over for a nice meal. Jennie thinks it’s a great idea to invite the gang since the last time they were together was in Vail, and we all know how that ended. Jennie has hopes that this dinner will allow everyone to vent their issues and move on. LOL — such a newbie.

Sharrieff calls Jen a good wife because she got him some Popeye’s, and he doesn’t really seem to be stressing about the legal issues at hand. Jen tells Coach that she is upset that Lisa has yet to return her calls or texts, and she tries to cry to show her anger. Jen cannot believe Lisa is not there for her in this troubled time. Jen declares that she is innocent and claims she knows nothing about what she is accused of. The retainer for the lawyer is about one and a half million dollars and she is stressing and feeling very alone. Jen yells that she is scared and is more concerned about people showing up for her than about all the pain that is occurring. Coach assures her that his family loves her, and Jen cannot fathom why this is happening to her.

It’s the day of Whitney’s $20,000 photoshoot for her new brand Wild Rose Beauty, and of course, she invites a few of the ladies over to witness the magic. Heather is super proud of her cousin, and Jennie is just thrilled to be invited somewhere, so they are there to support her.

After a few pics that do not demonstrate the Wild Rose logo (what’s the point of this rebrand again?!), Jennie invites the ladies to her dinner and lets them know she plans on extending the invitation to everyone, even Jen. Heather jumps in to tell them she lunched with Jen, and she shares that she prays Jen is innocent.

Whitney explains that she is so tired of fighting with everyone, especially Lisa. Whitney believes that Lisa “drops little breadcrumbs around,” and she wants everyone else to get their hands dirty with the gossip. She is so fed up with this that she has decided to go right to the source. Whitney drops a bombshell: She called Cameron to find out the truth about Mary and her church. Based on the convo, Whitney explains that Mary is “bigger and badder” than the women could have ever dreamed.

Whitney has decided that she is going to share the information with Lisa because she is afraid of Mary in the hopes of getting the drama pinned on Lisa — the way that Lisa always does to the other women. Jennie tries to point out that Lisa would never make a grandiose plan, but one would argue that Lisa DOES in fact have the time to concoct a plan to take down Mary and Whitney.

Whitney finally states, “I do not think it is in my best interest to take Mary down alone.”  Whitney makes it clear that Mary’s congregation thinks she is God and Mary is not used to people standing up to her. Whitney needs the facts before taking the plunge away from the long friendship she has had with Mary… and is she ready for the repercussions of opening Pandora’s box with Cameron?

TELL US – WHAT DID YOU THINK OF THE  EPISODE?