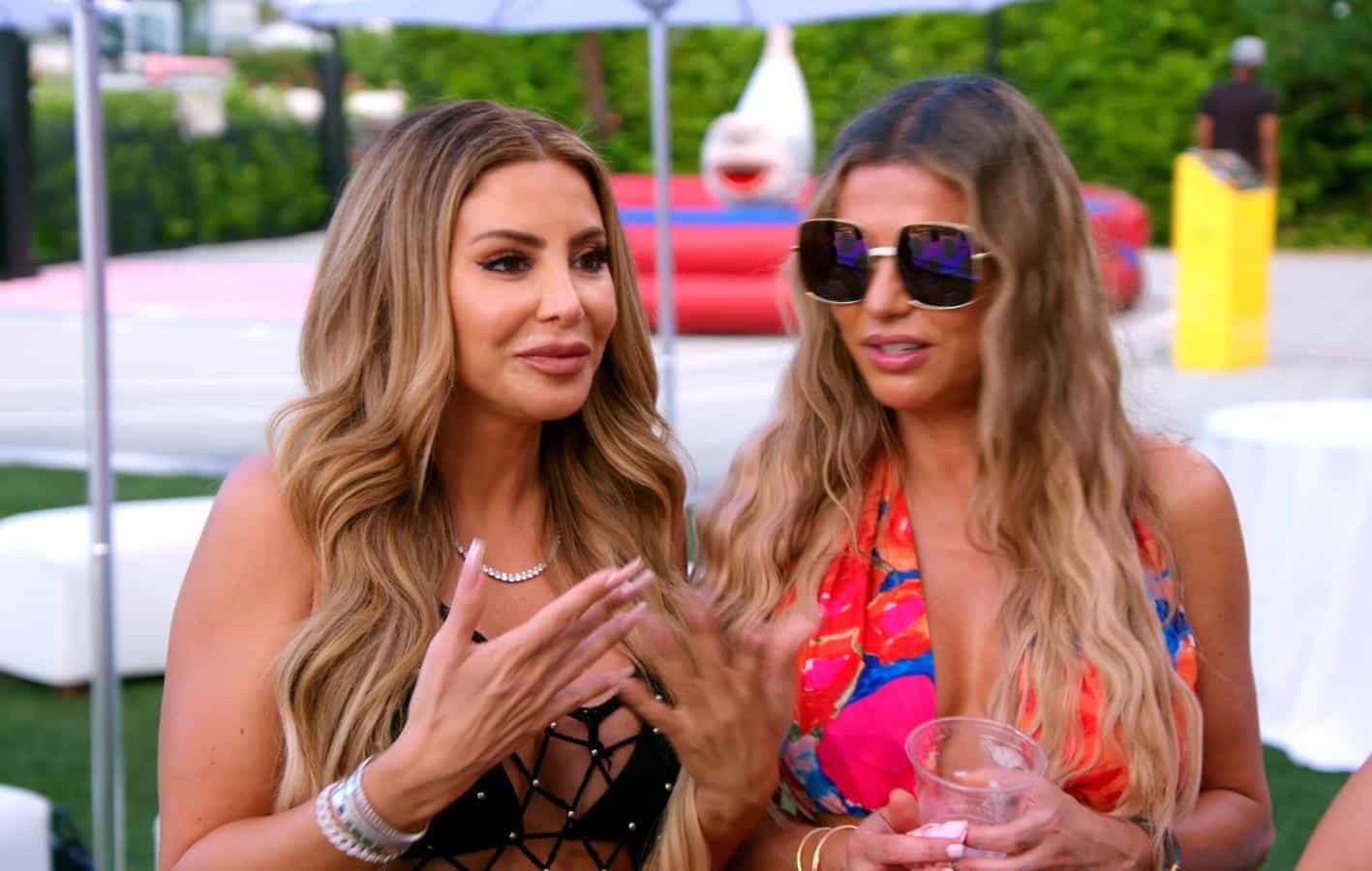 Finally, we reunite with our spicy ladies of the Real Housewives of Miami! There are fresh faces and some revamped ones that are melting in the Miami heat. Let us catch up and see what they have been up to, shall we?

Before I begin my recap, I just wanted to share a few things about my hometown of Miami. It has a lot to offer entertainment-wise, and the scenery is spectacular over Biscayne Bay. Downtown Miami is the heart of the city and offers a lot of things to do, and the Design District is a must-see. South Beach gets all the attention for the clubs and restaurants, but it is not one of the best beach locations unless you like to just people-watch! Sunny Isles has one of the prettiest beaches down south. I would advise you to check it out if you venture down there if sitting in the sun and sipping cocktails is your thing. Let us dive into the recap!

Mama Elsa’s voice narrates the opening sequence describing Miami’s vibrance and flair. Production gives us some flashbacks from the previous seasons. Mama Elsa was such a big part of this franchise so she will be missed. Lisa, who is an OG of this series, is meeting up with the other ladies. She is still married to Dr. Lenny Hochstein, who she likes to refer to as the “Boob God.” Adriana, another OG, joins the group with her lighter locks, but she still has the same saucy vibe. Lisa claims this core group has remained friends in hopes they will get back on the air partying in Miami.

Marysol, who claims her face is melting away from the heat not from all her surgeries, mentions Mama Elsa, who passed away, and how she misses her dearly. Mama Elsa was a memorable character on the show. She had some good one-liners, and you could not look away when she was on screen — literally. Marysol feels her mom sent her new love Steve since he is like her twin soul. Larsa, another OG from one season who looks super puffy, now joins the group. Adriana, in her ITM, thinks Larsa is a Kim Kardashian wannabe. She got divorced from her beloved Frederic during COVID, and I sense he ran from the hills. Remember she kept him waiting at the altar for hours? Adriana, along with Joanna Krupa, got married on this show, but they both have suffered from the Housewife curse.

Larsa talks about her children with Scottie Pippen and how they are co-parenting. She and Scottie seem to have managed to make this work since they have split up the kids and do not live in the same cities. Larsa invites the ladies to a hot girls summer party. Alexia asks about Larsa’s page on OnlyFans and how her kids feel about it. Larsa pretends that all she does is post her hot pics. She gets a lot of attention from the men from the Middle East and makes $10k a day for this? I agree with Alexia — you are showing more than a little skin when you are bringing in that kind of coin.

Alexia, the self-proclaimed Cuban Barbie, and her youngest son, Frankie, are driving around town. She gives us an update on her son Frankie, who had a serious car accident 10 years ago. I remember young Frankie back then, and he seems to be doing better after such a devastating car accident. Alexia mentions that she lost her husband Herman after they had divorced. She no longer has the magazine after Herman passed, but she owns a salon. Alexia drives into her parking garage, and how cool is her parking garage elevator for her 10,000-square-foot condominium?

On a happier note, Alexia has a new man in her life named Todd, and they are planning a wedding. Alexia shares that her other son, Peter, lives close by, but he does not have a good relationship with Todd. There will be some heated interactions between them according to the previews. Side note: For those of you who have not seen it, check out the documentary on Netflix called the Cocaine Cowboys. Alexia’s ex-husband, Pedro Rosello, is the father of her son Peter and one of the Kings of Miami. Alexia is interviewed throughout the documentary, and this was a time that made Miami the drug and murder capital of the US.

Lisa and Lenny have moved into their new 20,000-square-foot house on the exclusive Star Island. She cannot even count how many bedrooms she has, so I guess she has not gotten brighter with time. Lisa’s closet is insane — she can move the racks with a remote. There is some sick money on display with this franchise.

Lisa now has two new precious additions to her family. She has a son named Logan and a little girl named Elle, so Mazel Tov to her and Lenny. The journey that they had to go through to have their kids caused them marital strife, so they had to separate. Lenny had an emotional affair with a two-dollar ho according to Lisa. He still sees their relationship as a work-in-progress, but Lisa seems content with how things are. But there is trouble coming according to the previews.

We now meet the lovely Guerdy, who is from Haiti. She is friends with Alexia, so that is her connection to this group. Guerdy is also an event planner, so that will come in handy with Alexia’s storyline this season. She is planning a wedding at a venue in Coconut Grove, which is exquisite, and she wants to show Alexia the property for her wedding. Guerdy is married to a firefighter, who is very handsome, and she has two boys.

Larsa is having a party and has a hot lifeguard and a bartender. She looks ridiculous with her fishnet coverup. Larsa is really trying to show off her assets, and frankly, it comes across as desperate. She feels like she is winning since she is independent without Scottie Pippen and Kim Kardashian helping her.

We now meet Dr. Nicole Martin, who is an anesthesiologist and has a young son. She keeps reiterating that she is not married to Anthony, who is a lawyer, but she is in a happily committed relationship. The producer asks her if her boyfriend Anthony proposed, would she accept, and she would happily take that large ring.

Adriana arrives at Larsa’s home and is already being super shady just like the old days. She introduces Julia, who is touted as the first LGBTQIA+ Housewife even though Braunwyn from RHOC tries to make that claim to fame. Julia is married to tennis great Martina Navratilova, so that will be an interesting relationship to watch.

Adriana thinks that Larsa’s a*s could be seen from the moon since it is so large. She cannot stop herself from checking out her competition. Adriana cannot stop herself from showing off her triple-D boobs either. She is still an attention wh*re so not much has changed with her. Marysol feels a little out of place since they keep calling this party a hot girl summer party, but she is a hot flash type of girl. Girl, I can relate, and it is brutal when you live in the Sunshine State and are in menopause! Marysol does not trust Nicole since she hears her bashing the other ladies. She is giving us a warning that Nicole is going to be a little sh*t stirrer this season. 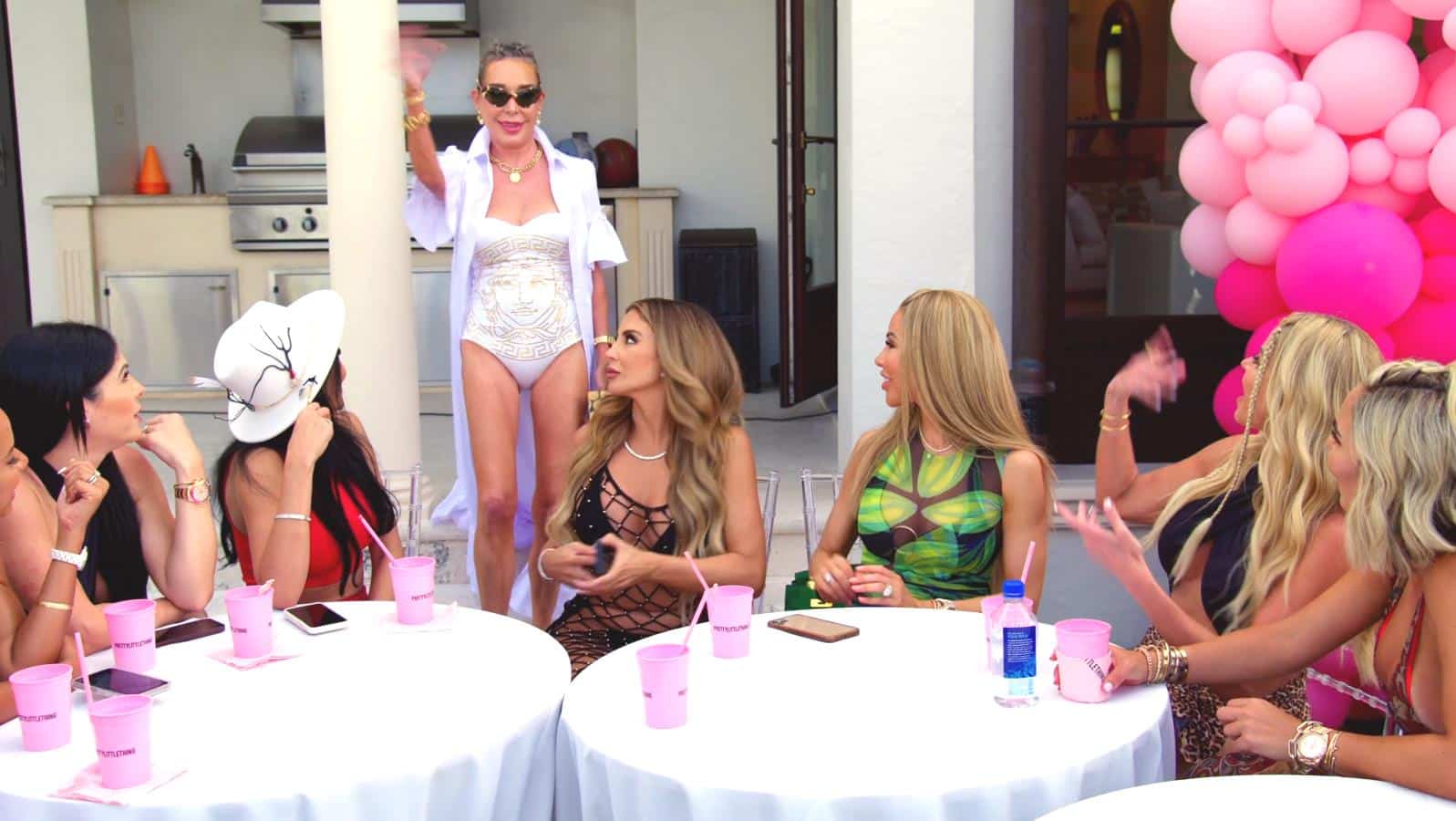 Alexia acts like she is old school and cannot relate to the OnlyFans business approach. She must have forgotten she was embroiled in the Cocaine Cowboys controversy. Once you watch the documentary, you will see the hypocrisy and ponder how she can act so holier than though now.

Julia has kids from another relationship and is happily married to Martina. Julia and Martina have two homes — one in Miami Beach and a farm in Fort Lauderdale. Julia was Russian-born and was Miss USSR back in the day.

Martina and Julia met at the U.S. Open and were making eyes at each other. They reunited at the French Open, and they have been together every day after multiple breakfasts. Hmm, that would suggest they must have had some adult sleepovers as well! Julia has become more open with her sexuality and feels extremely comfortable in Miami with Martina.

Alexia and Marysol discuss Herman and the rumors swirling about him being gay and being in a relationship with another man. She leads us to believe that she saw no evidence of that while she was married to him. Alexia does want to reach out to the man with whom Herman had a relationship since he was present at Herman’s funeral. We now have a to-be-continued after they check out his ex-lover’s d*ck pics….

Next episode, we see some cracks and not just in their faces but in the surfaces of the relationships amongst the Housewives. What did you all think of the reboot of RHOM? Please let me know in the comments! I hope your week is going well!