Home Real Housewives of Miami News RHOM Recap: Julia Flirts With Lisa and Adriana is Jealous, Plus Alexia Breaks Down After Finding Out Another Wedding Venue Has Fallen Through

RHOM Recap: Julia Flirts With Lisa and Adriana is Jealous, Plus Alexia Breaks Down After Finding Out Another Wedding Venue Has Fallen Through 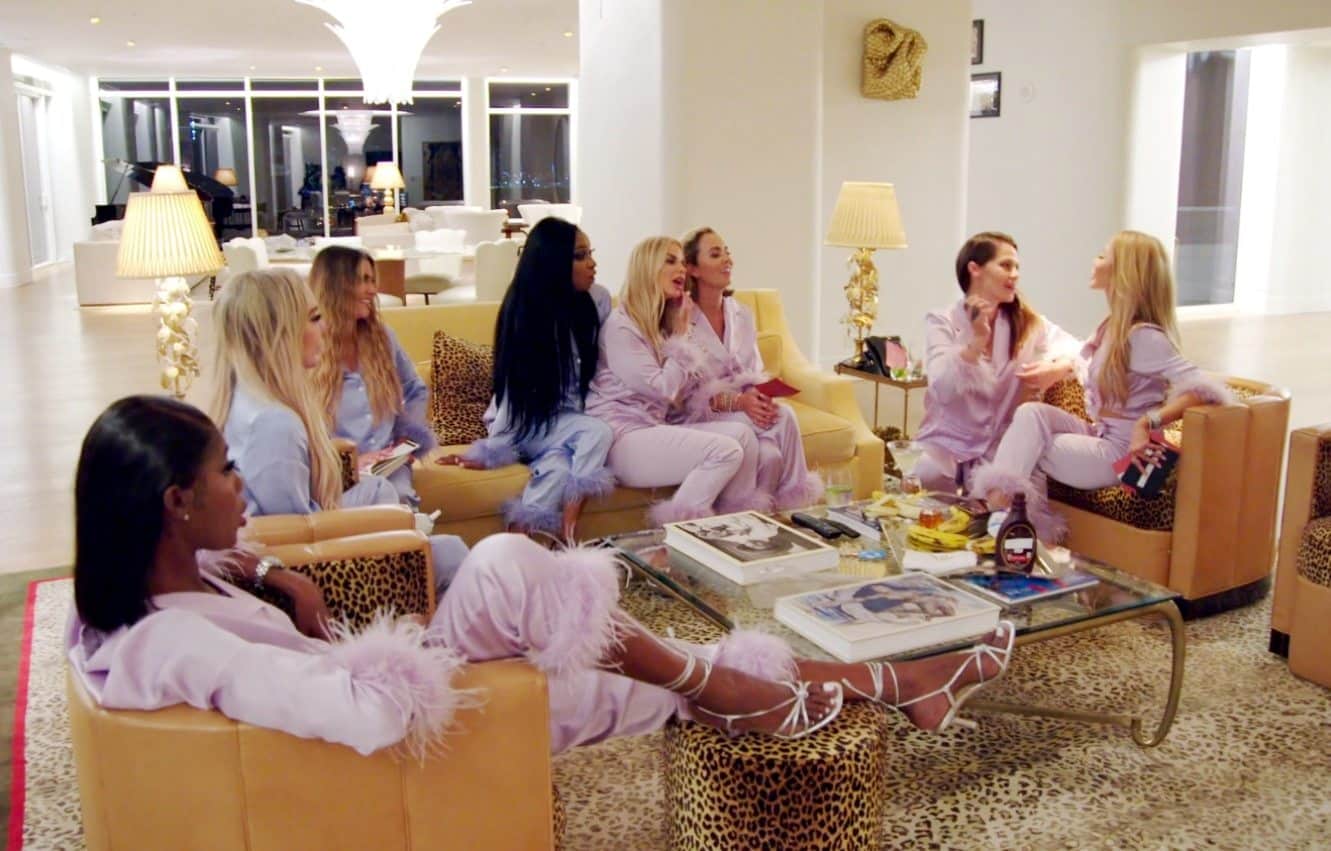 We will be experiencing another hot and spicy night with our Real Housewives of Miami. How will Alexia take the news that there is another hiccup in the wedding plans? Will she go all Bridezilla on Guerdy? Grab a mojito or two and let us watch!

Nicole and Anthony, who is a pilot, are taking Julia and Martina on a plane ride to a restaurant named Tavern N Town. They are going on a double date in the air to Key West. How cool is that to just hop on a plane to go out to eat in the Keys? The restaurant is Mediterranean-infused, and if you have never been to the Florida Keys, make some plans for some harmless debauchery and good eats! Julia is reflecting on how thankful she is that she has Martina. She supports her and loves her children as well. Production shows a clip of Julia, who is crying into her romaine at a grocery store because her daughter is going away to school. Side note: Did you all see on WWHL that Nicole and Anthony are now engaged? Is Nicole trying to get the wedding storyline next season just like Alexia has this season?

Lisa is bravely stupidly taking her kids to the infamous Sugar Factory. This place is awesome, but if you cannot watch your own kids without help this sugar-infused restaurant is not the place to go. Lisa looks like a fish out of water with her kids, and she is struggling as she tries to manage them. The producer asks Lisa, “Is being a mom everything it is cracked up to be?” Lisa mentions that the nanny quit so she must handle this on her own. Lenny is still of the belief that she does not have much to do at home and can handle this responsibility. I agree with Lenny that she wanted them desperately and now she has them. Put down the selfie stick and cancel the salon appointments. Lisa should pull out her hair extensions and throw her remaining hair in a bun. Chase those little sugar-infused tykes around your mansion — it would be like going to the gym. Am I right or not?

Marysol is having Alexia over to catch up on the Todd and Peter situation. Alexia describes how things went out of control. She is still defending Peter, but then production shows the “real Peter” and how he can be nasty. Alexia is in the middle of two people she loves. Marysol says Peter has a “soft soul,” and I could not stop myself from laughing aloud at that. Alexia thinks that Peter struggles since he wonders what Frankie could have been. She is in an alternate universe if she thinks that is all that is wrong with Peter.

Alexia is going to fight to have Todd and her family united. She is determined to make it work and thinks this is her forever relationship. Alexia needs to open her eyes and get her family some needed help. We know Peter is still getting himself into trouble to this day.

Guerdy is meeting up with an event planning team to talk about her charity. She is organizing an event to honor the victims of the Haitian earthquake. Guerdy wants to honor her brother, who lost his life and spent his career working for the United Nations. She is giving the proceeds to help the children in Haiti to get an education. Bravo to you, Guerdy, for doing something to help your impoverished country. Guerdy then gets a call from Alexia, and she has decided on an outdoor venue for her wedding. Hallelujah, we have a wedding venue — for now.

Larsa is getting glammed up for her jewelry shoot for her line called Larsa Marie. Kiki arrives, and she wants her to model her designs. Larsa is having Harper’s Bazaar shoot her jewelry line at the Hamptons. I agree with Larsa that Kiki is a gorgeous model and will look great in her shots. I think Kiki brings more to this show than Larsa, who is just promoting her daughter’s modeling and jewelry line. What do you all think?

Lisa is meeting up with Nicole, and they are comparing their amazing “sick” bodies. She is planning a pajama party for the girls. Nicole is telling Lisa about her mom pushing her to have a relationship with her dad. She wants her dad to become a part of Greyson’s life. Lisa mentions that Alexia has been super snippy with her. Alexia happens to call when Lisa is doing her ITM. Lisa compares her to the devil with the face of a Cuban Barbie Doll.

Lisa is having her event at the Faena Hotel, which looks spectacular. She has a cabaret show planned for everyone and then they are staying over. The Faena has the largest penthouse in the U.S. and the views are to die for. The penthouse costs $50k a night, and Lenny the boob God is getting the bill. There are a lot of boobs here, literally and figuratively!

Lisa puts Adriana and Julia together in one room. Adriana claims she is leaning on her friends since she has been lonely. She does not want to lose Julia as her support . Julia does not care what others think about their relationship and will allow Adriana to use her for a storyline. Guerdy arrives in a sensational black dress, which does not disappoint. She will not engage in stupidity with Adriana and just breezes around the room ignoring her. Side note: Adriana in her ITM looks ridiculous in her lavender dress with her fake blonde braid.

Adriana has now pretty much mounted Julia and is force-feeding her. She demands she go deeper and deeper. Adriana, you are going to make her choke and you are coming across as foolish and desperate.

Guerdy and Nicole are discussing Alexia’s wedding, and she shares with her that another venue is backing out of the wedding. She has all the other vendors lined up and has been working feverishly. Guerdy is going to tell Alexia tonight that it fell through. Nicole does not think it is a clever idea to unleash that news on the group. Alexia is inside discussing with Marysol about how she is stressing over the wedding planning. She does not think that things are not progressing like she and Todd thought they would.

Guerdy gets saved by the Larsa bell before she blows Alexia’s Barbie doll head off her body mind. Larsa is busy with her Larsa Marie brand and invites them all to the Hamptons. Marysol wants to know if they will be getting a private jet. Larsa is working on it so these pampered princesses do not have to fly commercial.

The ladies are now at the burlesque show, which looks super sexy. The show looks provocative and sensual while the semi-nude artists spin around the bed. Lisa, aka Tits McGee, gets called up to the stage to perform. She is asked to describe a fetish to the crowd. Lisa is laying on the stage and proclaims that she has a fetish for Julia. Adriana is a little jelly when Lisa claims to have a crush on Julia. Lisa clearly has no idea what the word fetish means. She is looking to “turn” for Julia.

Marysol questions Guerdy about Alexia’s wedding plans. Guerdy must tell Alexia that her big scaled production cannot be accommodated. Alexia is so self-centered wanting to have this big production for a THIRD WEDDING during COVID. Todd would marry her anywhere, and she thinks the universe is telling her not to get married. You should listen to what it is telling you!

Marysol thinks that Alexia is broken down from all the Peter drama. Lisa tries to break up the sadness by playing a game of truth or dare. She is trying to warm them up for Alexia’s bachelorette party. Julia chooses a dare and must feed Lisa almonds with just her mouth. Adriana gets jealous that Julia kissed Lisa while doing this. Julia, the ever so flirtatious one, claims it is harmless fun. She has a carefree attitude and just likes to have an enjoyable time. Julia gets asked if she would cheat on Martina and she insists that will never happen. Do NOT break Martina’s heart!

Nicole is getting ready in her gorgeous closet to meet up with her dad to chat. She is wearing a shirt but seems to have forgotten her pants. Julia’s dad, Miguel, who thinks he is Rico Suave, brings her flowers. He is dressed flashy and has lots of swagger. Miguel thinks she should have more than just one kid. He brags about having more kids than just four and he is not stopping yet. Julia thinks he is deliberately trying to hurt her. We now have a to-be-continued…

Next week, they head to the Hamptons. Adriana is still flashing her boobs around and trying to get Julia’s attention. I hope all of you Blurbers are having a good 2022 so far!