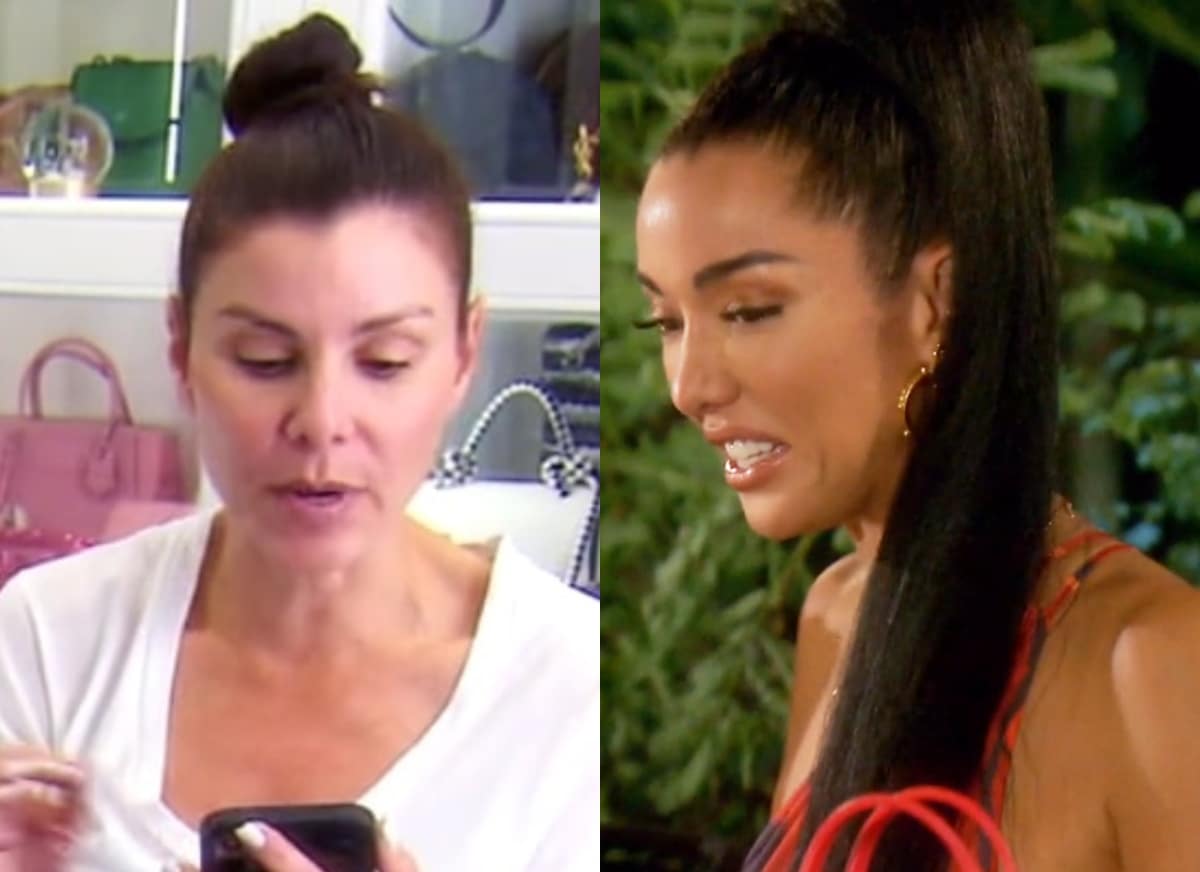 It’s time for a perfectly planned Heather Dubrow trip to Cabo on this episode of the Real Housewives of Orange County. But will one housewife manage to ruin the fun for everyone?

Emily is out shopping with Nicole and Jen for the upcoming trip to Cabo. Emily is also nursing a huge hangover after the book signing event, and so she is lugging around a liter of ginger ale with her, which I presume goes perfectly with the turkey sandwich in her purse. Although Emily looks incredible, she muses that going bathing suit shopping with Nicole and Jen is like “trying on bathing suits with two smurfs.”

Nicole shares that she is over Noella, and it is very clear that Nicole is trying to get Emily to think badly of Noella. Nicole appears shady and petty and claims she is staying as far away from Noella as possible; therefore, if Noella is going to Cabo, Nicole is out. Time will tell if Noella ever gets the invite…

Shannon is also busy prepping for the trip. She seems less than thrilled to go, particularly because she hasn’t seen the girls in about two weeks. Shannon is happy that she is in a “decent” place with Heather but wonders how the rest of the crew is currently getting along.

At casa Dubrow, Gina stops over and plops down in Heather’s glorious closet. Seems a bit over the top to have a casual convo in the closet of all closets, but I digress. Heather explains that the ladies are flying private to Cabo and that she has rented a spectacular villa. As Gina listens to the itinerary, her excitement grows, but then she decides to ask Heather for a favor.

Gina explains she is feeling guilty about leaving Noella out of the trip. Heather, the ice queen, nods and doesn’t even try to appear sympathetic. Heather explains to Gina that it isn’t that she doesn’t *like* Noella — it’s more so that Noella gave Max a “questionable gift” at the book event: a pride-themed card game… but the cards are basically pornographic and incredibly inappropriate to gift someone’s 17-year-old daughter. Cringe.

Gina tells Heather it might not be the best decision to invite Noella, but she is hoping Heather would nonetheless extend the invite. Heather agrees, but she makes Gina promise to be on Noella duty. It’s a deal.

We learn that Heather and her family “go to Cabo 10 times a year…maybe more sometimes.” Show. Off. We also learn that Nicole “couldn’t come” and that Noella will be joining the ladies a bit later in the trip. Notice how quickly Noella accepted the invitation from Heather, yet she has no problem being outspoken about her lack of respect toward Heather.

Heather has this trip planned out down to the minute and Shannon promises to be “fun Shannon.” I can’t believe I’m saying this… but I miss Mexico trips with Vicki and… Andales. The Spanish tutor meets the ladies at the rental villa, and the women toast while getting led around by the house manager. Ah, to be rich. Everyone has their own casita, there are pools, and it’s on the sand. Sign me up. Man, Gina has moved up in the world. ‘Member when she was LIVING in a casita IRL? Now, look at her vacationing in one.

Gina explains that Emily is like her vacation wife while Jen is busy trying to be a better wife. She phones her husband “Ryne” (aka Ryan), and she admits that she has no balance with home life, work, and friendship. It also seems like we are watching their marriage disintegrate before our very eyes.

Heather shares with Emily and Gina that her architect was there discussing the design of her soon-to-be-vacation “hideaway” in Cabo. She explains that she is building this place for her kids so that they will always be connected. Speaking of children, anyone else getting house mom vibes from Heather? Checking in with her “kids” — aka the ladies — and then reminding them they can do whatever they like. LOL.

Shannon, Gina, and Emily have decided to go horseback riding. Everyone has had some experience on a horse, except Gina, but she reminds us that she knows how to ride *some* things. In the meantime, Heather and Jen have a lovely, forced chat back at the villa. Jen explains that she is on a narrow diet and that she “strives” for family dinners. She also tells Heather that she realizes her family dynamic is disconnected, but she hopes to enjoy the downtime on this vacation — that is after she exercises. You see, Jen had a bone tumor in her leg and is in pain every day, but it’s manageable through physical therapy and exercise.

Post horseback riding, Emily, Gina, and Shannon plop down for some champs and gossip. Shannon states that she is worried about the reception Noella may receive upon her arrival. Gina has high hopes that if Noella and Heather could be in the same place, they may be able to bond. LOL. Gina, you are so naïve. Shannon suggests she, Gina, and Emily all act as the peacemakers, which is a far cry from the fighting they just did a few episodes back.

BTW: How awkward is it that the horseback riding instructor is just chilling in the background, sweltering in the direct sunlight, with the horses, waiting for this staged scene of a picnic to wrap up?

“Whenever Noella shows up, it goes to sh*t.” Well, Noella has finally made it to Cabo AFTER forgetting her passport and arriving later than planned. She is irked that the women did not wait for her at the villa and instead went to the restaurant (ya know, where they had a reservation!).

Seems like Gina is getting more and more worried about her promise to Heather about taming Noella because when she enters the restaurant, the entire mood at the table changes. Noella explains that she brought her passport card because she didn’t realize that she needed an actual passport for a real plane (in case you forgot that she USED to have a private plane — sigh, used-to-be-rich-girl-problems).

Noella is in the Noella show and has zero sense of self-awareness. She rattles off that her life is not so bad when she compares hers to Gina and her mugshot or Shannon and her husband’s affair. Ouch. Noella complains about warm tequila before taking a shot, and you know you’re being a picky brat when HEATHER thinks you’re behaving over the top.

Noella pushes Emily to spill about the stuff Nicole said she said, and so Emily states, “She said that you said all I do is take my kids for frozen yogurt and shop at Costco.” Noella apparently also called Travis a loser. Noella denies that but admits to saying some stuff about Gina’s house. Noella believes that Nicole had “marching orders” to discredit her in front of the ladies, and she feels like Heather is setting Nicole up to do her dirty work.

As the dinner wears on, the dynamic is getting harder and harder to control. Emily, Gina, and Noella take a timeout from the table. Noella is not eating the dinner she ordered, and Emily is trying to show Noella how that could come across as rude to Heather as the host. Noella believes that Emily and Gina have drank the Heather Kool-Aid, and she rants how she is not afraid to be on Heather’s bad side. Back at the table, Heather reminds everyone that THIS is the exact reason she did not want to invite Noella. Will this trip make a turn for the better or will Heather regret Noella’s invite?