Home Real Housewives of Miami News RHOM Recap: Marysol Accuses Nicole of Calling Larsa a Hooker and Homewrecker, and Shading Lisa and Lenny’s Over the Top Style Choices as Tacky

RHOM Recap: Marysol Accuses Nicole of Calling Larsa a Hooker and Homewrecker, and Shading Lisa and Lenny’s Over the Top Style Choices as Tacky 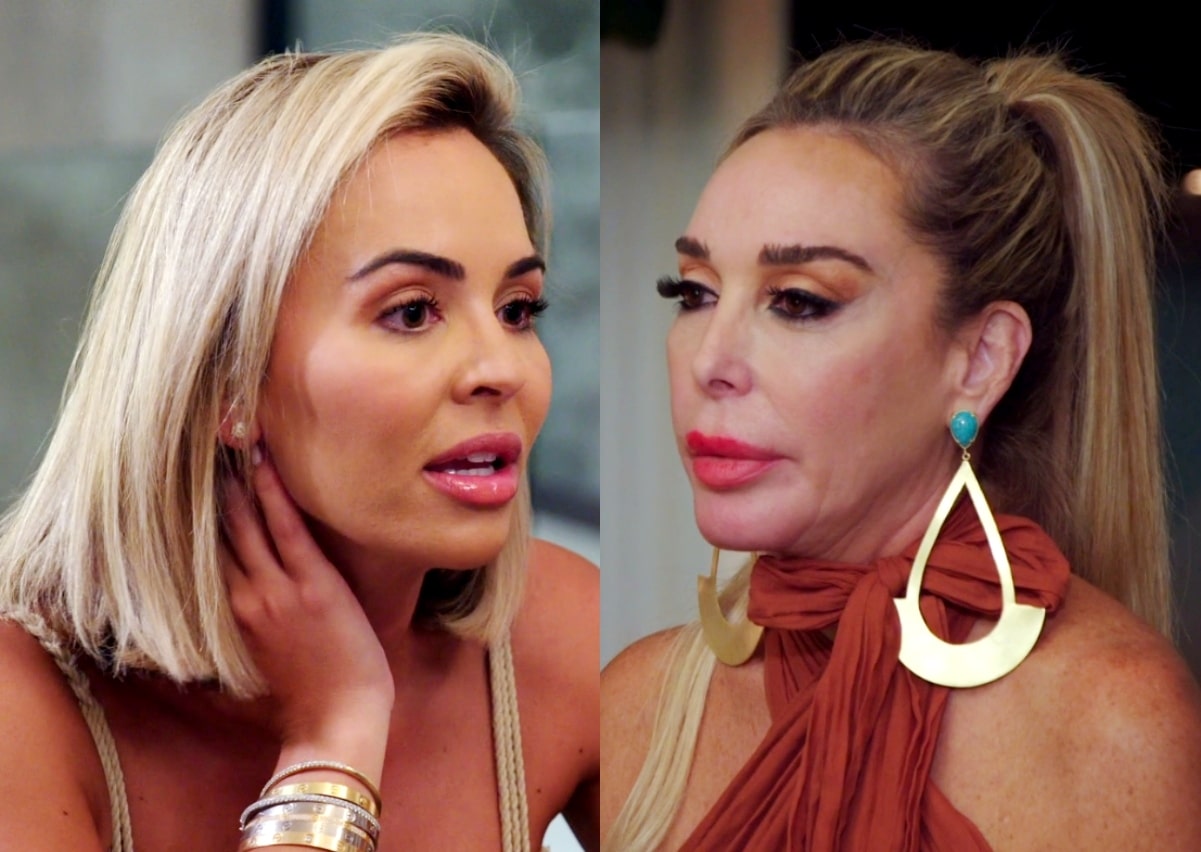 When the title for the Real Housewives of Miami‘s episode is “Bling (Larsa’s), Boobs (Adriana’s), and Bickering (pretty much everyone),” you can make the assumption we are going on another girls’ trip to hell. You’ll witness a grab for mojitos, figuratively, and a change in the power structure. Let us fly away to the Hamptons, shall we?

We pick back up with Nicole, who is still butting heads with her Lothario dad. He thinks being there monetarily is acceptable, and he has no desire to be there emotionally. Nicole thinks he cannot make good decisions due to his excessive drinking and should not continue to just procreate. She taps out when her dad tries flattery by telling her she is beautiful. She calls her mom, Sirel, and she is sobbing since her dad disappointed her — yet again.

Lisa is packing for the trip to the Hamptons, and she is showing Lenny her clothing choices. Lenny does not care that she may look naked in some of her clothes. She thinks that he will enjoy the peace and quiet without her being there . Lenny seems really checked out, and they do not seem to have the chemistry they used to have.

Nicole and Anthony are chatting about what happened with her dad. She is emotionally drained after talking to her dad. Nicole wants to go to the Hamptons to support Larsa, but she is not in the mood to have fun. She is going to regret being so supportive of her dear homewrecker friend.

Larsa is trying to FaceTime with Scottie through a phone call with her son. She cannot get him to give her two minutes of his time. Larsa thinks Scottie is dragging his feet selling the Florida house even though he has not lived there in a while. This telephone call is pretty telling, and it shows that she cannot even get her son/Scottie to respect her enough to speak to her on camera.

In the van, Julia shares with the other ladies about how Martina has women flirting with her all the time. She claims that Martina gives out a guy vibe. Is Julia trying to defend her flirtatious behavior? That argument does not fly since Martina is not reciprocating by flirting back with these women. Lisa thinks Julia is trying to see how many women she can turn. She just might have a point there.

The ladies are pleased with Larsa’s choice of homes. It is a contemporary home in Montauk on the beach with a pool. There are only five bedrooms, so we can expect a housewife showdown on who gets the best room — again.

Adriana and Julia are trying to score the best room. She strips down and jumps in the bathtub so she can mark her territory. Adriana is showing off her 32 triple-Ds to everyone, including the realtor who is walking everyone through the house. Larsa is pissed that Adriana came in so aggressive and took over the room meant for her. Adriana looks rough in this scene and is in desperate need of a hair wash, so let her wash off and get out of your tub. She has been showing her boobs and her desperation for that mojito, and she proves she is the thirstiest for attention.

Julia is now washing Adriana’s back and dribbling ice cubes on her chest. She obviously is not concerned that Martina is going to see this. Lisa is downstairs stomping her little feet and is having a temper tantrum over having to share a room. Marysol needs the wheelchair-accessible room since they need easy access to all the facilities in the home. She has the best excuse IMO since we usually give preference to our elders on our girls’ trips.

Adriana thinks that there is a pecking order, and she thinks Lisa and Larsa have appointed themselves the queen bees. Lisa will go to a hotel if she does not get her own room. She thinks Alexia has been snapping at her when she speaks up. Adriana thinks that Larsa has been out of this group for 10 years and suggests she has lost her ranking in this group. No, my darling Adriana, you’re the one who’s lost your footing! Kiki just wants to settle this so she can go poop after having coffee. Let the woman go poo for god’s sake!

Julia cannot understand why they cannot talk through this without being aggressive. Nicole then calls Alexia a hairy spider. Is she suggesting that Alexia could potentially eat a male spider (Todd) and protect her nest filled with silk (Peter) and excuses? Nicole thinks that Alexia treats them like her minions when she demanded that she take a photo of her and Larsa at a club. Marysol jumps in to defend her best friend Alexia since she is dealing with so much. Alexia does not care that she comes across as argumentative. She brought Nicole into the group and feels she has inserted herself in Lisa’s a*s and took her BFF Marysol’s mojito away.

Julia thinks these women are like a bunch of clucking chickens. She could have stayed on her farm for this nonsense and listened to her cursing bird. Alexia refuses to apologize for her aggressive behavior. She is a frustrated wannabe attorney. Alexia, that would have come in handy with all of Peter’s legal issues you’ve had to deal with.

Alexia shares with Adriana and Marysol that the rift between Todd and Peter has been resolved. She still does not have a wedding venue and is concerned they might not find one. Alexia wants to marry Todd so she can have a happy united family.

Julia calls Martina and tells her about Adriana’s desperate grab for attention. Clever idea since she may not appreciate seeing that bathtub scene with Adriana. Marysol reflects on if her mom were there, and she would not have tolerated this room nonsense. She misses her mom and how she dealt with drama. Mama Elsa would steal the show from everyone, and she would have checked all of them on their behavior.

Alexia calls Todd and tells him about the room drama. She cannot believe that Lisa brought her hairstylist to the Hamptons. Alexia does not think she will survive with these divas until Friday. Lisa refuses to defend her choices to look good and take care of herself.

The chef has created a beautiful seafood feast for everyone, and the ladies decide to start without Lisa. Marysol decides to play a very shady game about who you trust the least. She gets some pushback from the girls about how this will be ugly. Marysol is clearly using this game to target Nicole and tell the group she trusts Nicole the least. Marysol shares that Nicole has talked shit about all the other ladies. She says that Nicole has made fun of Lisa and Lenny’s house. Marysol is gunning for Nicole by telling her that she knows that she called Larsa a hooker. Production shows that Alexia was the one who was sl*t–shaming Larsa.

Nicole will only say that she and Lisa are stylishly different. She denies that she bashed Lisa and Lenny’s home or Lisa’s style. Larsa calls Nicole out about how she changed when she met Anthony. She suggests that she left her broke schoolteacher for the wealthier Anthony. Nicole defends herself by saying that she was separated from her ex before meeting Anthony. Nicole does an excellent job telling them that they are all guilty of judging each other. It is very hypocritical of all of them to suggest that Nicole is the only guilty one.

Lisa wants clarification on why Nicole has misconceptions about her. Larsa then rudely shuts Lisa down when she tries to speak up for herself and suggests that she should remain Switzerland like she always does. Larsa then tells Nicole that they could shame her for having a child out of wedlock. She just did by saying that. Julia cannot believe that they are going there when she had three kids with three different men out of wedlock.

Nicole shares that her BFF Alexia said that Marysol is bored, and she is just trying to make herself relevant by marrying Steve. She is willing to put her son’s life on the line that Alexia told her that and is not backing down. Alexia claims that Nicole has called Larsa a homewrecker. Larsa is so arrogant telling Nicole that she just got here five seconds ago. Julia tries to shut everyone down and tells them they should give Nicole the benefit of the doubt. Adriana, who is suspiciously quiet, is not getting involved in this mess. She is too busy chowing down on her food. Adriana does not want anyone to start sharing the shade she has thrown behind their backs.

Lisa finally shuts this conversation down and makes a very eloquent argument. She says that people often have misconceptions about her and Lenny. Lisa knows that once people get to know her, they will change their minds. They all finally decide to call it a night. Lisa gets a cot in Alexia and Marysol’s room and they joke about being a “ping pong full.” Well, if this is how the trip is starting it does not seem to be a relaxing getaway.

Next week, the trip continues and Guerdy joins the group. Alexia tells Nicole she will not come between her and Marysol’s friendship. Have a great weekend, everyone!