RHONJ Recap: Dolores and Jackie Almost Come to Blows Over Jennifer, Plus Jackie Breaks Down Over Fear of Eating Disorder Relapse 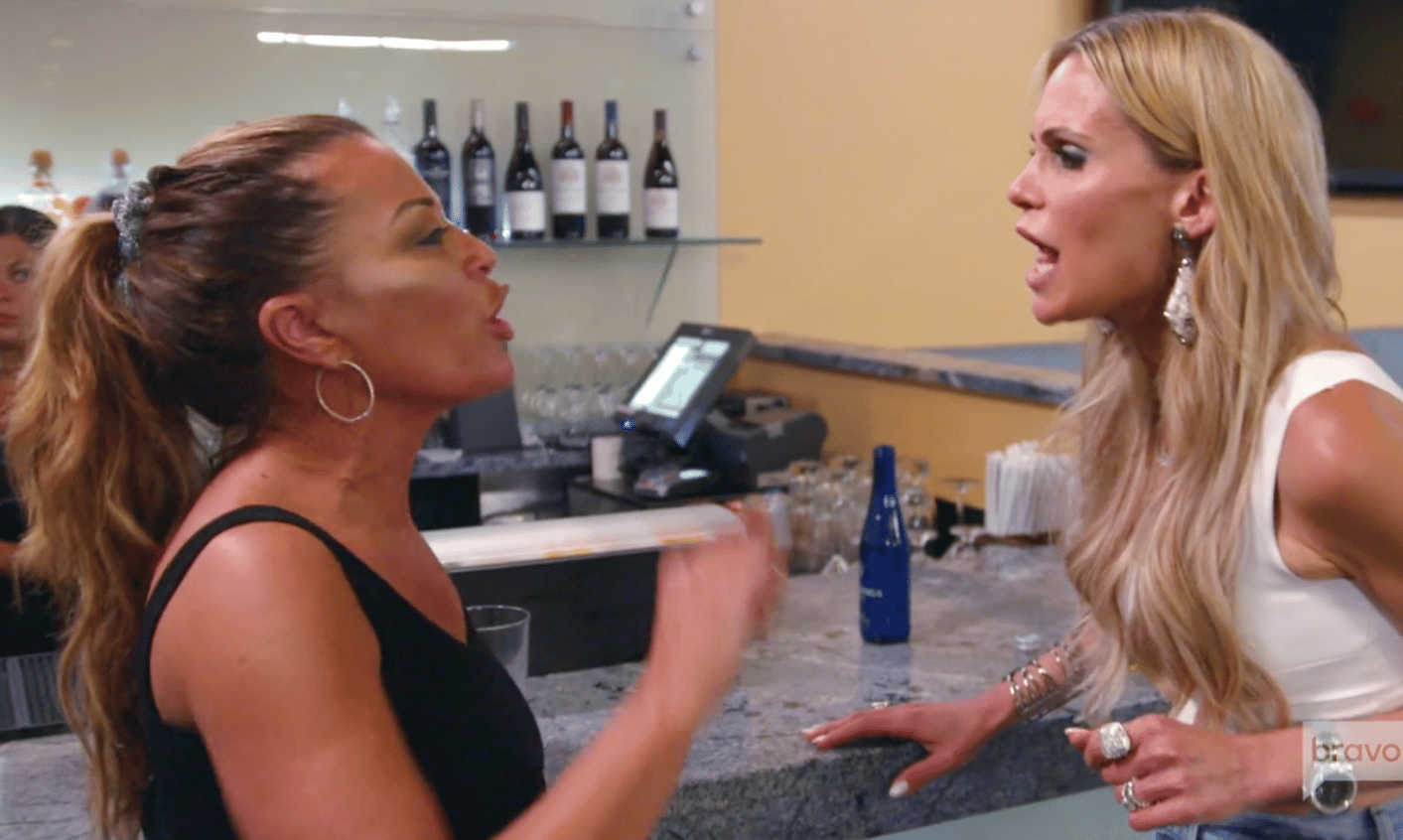 Are you all ready to eat some brick oven Jersey pizza and receive some counseling from Louie, or would you rather watch another episode of the Real Housewives of New Jersey fight club? Let us pick our poison, and not one from Joe Gorga either, shall we?

Dolores has her kids living with her in the townhouse since there is no hot water in the Catania household. Gabby and Frankie Jr. cannot wait till the renovation work has been done. They both have good jobs — especially Gabby — so why do they still want to live at home anyway? Free pasta and vino? Dolores shares that Frank Sr. wants to move back in permanently. She is willing to allow him to move back in because she prefers her role as the Catania doormat. Dolores pretends like she was supposed to be moving into the house that David built for her, which is laughable.

Gabby oddly calls her father “Frank,” and she does it in a way like she is talking about their neighbor and not her dad. She does not think that her mom is making good decisions regarding her dad — again. Gabby does not want her dad bringing his young playthings home with him. Frankie Jr. will not rock the hot girl party boat that his dad has been riding on. He will not pick a side because he does admire his dad’s frat-boy behavior even though is a grown a*s man. Excuse me, Dolores, Frank Sr. has never lived with his kids? Dolores describes Frank back then as a hothead, and that just drops the weight bar even lower than I had for him. Frank does not have many redeeming qualities since he already lost his bar license. He should consider a liquor license since he does not seem to ever pass up a bar.

Gia is having a photoshoot done for her song, “Waking up in the morning,” themed sweatshirts. She recently had some rappers give her song some airtime, so she decided to market her song title. Teresa gets a text from Louie about getting together to mend the fences between the girls and Joe Gorga. Milania is the one who is the most protective of Joe Giudice. She does not want to hear Uncle Joe yelling at her mom, but somehow, her dad was given a free pass for it for years…

Frank, of course, Joe B., and Joe G. meet up for a medieval guys’ night and drink some ale. He thinks the other guys are competitive since he gets laid the most. Joe B. wants Dolores when Marge kicks the bucket. Frank discusses being called in for a family meeting. He thinks there is trouble in paradise with Dolores and David. They are all concerned about Bill and how he is doing regarding the infidelity. Frank Catania wants to go on a retreat like Louie did and get naked and beat the shit out of each other. He loves that barbarian crap.

Jackie and Evan are having a date night without any kids since they are away for two weeks. She reminisces over when they first met and liked to party. Jackie remembers when they dated, and she did not eat anything. She is showing some vulnerability in this scene, and it makes me feel a lot of empathy towards her. Production shows the photo from their wedding, and it is shocking how thin she was. Evan is concerned that their kids notice Jackie’s eating habits. Jackie admits she is always hungry and afraid of food. Evan wants her to get some counseling. He is being supportive and wants her to get the help she needs.

Jennifer calls Jackie, and they discuss all the divisions in the group. Jackie tells Jen she is going to have an old-school keg party. Jennifer must check with Bill to see if he is up to going. I hope this gets resolved soon since I still love Dr. Bill and forgive him for his transgressions. If Jennifer were smart, she would not have reacted to Marge’s revelation about Bill. She should have said, “I forgave him for that 10 years ago and we are stronger than ever.” Jen would have been better off telling Marge that she was the woman in her eyes from 10 years ago that tried to destroy her family and that is why she saw her as a homewrecking wh*re.

We are now at the pizza dinner put on by the self-help pizza guru Louie. He is trying to guide the family through their troubles with loving guidance instead of throwing punches like he did at his He-Man You-Woman retreat. Teresa and Gabriella come over to Louie’s house for the pizza party. Gabriella is listening to Louie talk and is looking at him like his brain is a big block of cheese. She is not thrilled about talking about her feelings, and she is concerned about how this evening will play out. The Gorgas arrive, so let us see how the family can make nice over pizza.

Louie thinks it can be productive when families collide. He has appointed himself the leader of the charge to reunite the family. Joe Gorga thinks that Louie is speaking in code since he needs those handy dandy flashcards like his sister. Teresa will not acknowledge any faults during this exercise. She bats her eyes at Louie and expresses that she is simply perfect the way she is. Simply is the keyword here. Melissa is incredulous over this non-revelation and wants to get this sh*tshow of a family together more often. Joe thinks that anything he says can be forgiven five minutes later. Slow your roll, Uncle Joe, you have some very unhappy young ladies who were raised by a barbarian and are hurt by you, so tread lightly on your little feet.

Milania, who is the most like her dad, decides to speak up, and she has a lot to unpack. She does want to see Uncle Joe speak to her mom so angrily. Joe admits he is living in the past, and he is going to try to not be so angry anymore. Louie gets all the credit from everyone for bringing them all together on neutral grounds.

Jennifer calls Bill to see if he is game for the frat night. Bill is honestly forthright and remorseful over what he did. He does not, however, owe any of these people any apologies, so he should just keep coming around. Traci and Tiki are then bizarrely stuck after this scene to talk about the “lies” that were spread about them when they got together. They most definitely had a highly suspect start to their relationship as well.

We have arrived at Jackie and Evan’s keg party. The gang is all here except Teresa since she has some motherly duties to attend to. Margaret tells Melissa that Dolores knows the size of Joe’s penis. When confronted about that, Dolores plays it off that all Italians have big d*cks. Melissa looks like she is not totally convinced. Marge is still on the “Jennifer owes me an apology train” and refuses to get off. Traci wants Marge to show Jen some empathy ? Bill and Jen arrive while the whispering is going on. Bill tells Tiki that his skeletons came out of the closet the last time they saw each other. I like that Bill is going to just face it and own it.

Melissa then shadily asks Dolores about David, and she admits they are done. Dolores feels like David did not allow her into his life. She was the best doormat ever, and he still did not want to wipe his feet and be available for her. Side note: I am so glad that Dolores is done with Dr. Casper, and hopefully, she can find a man that will appreciate her.

Jennifer not-so-surprisingly throws Jackie under the bus by telling Dolores that she questions their friendship. Dolores looks truly peeved when she hears that. Jen does admit that she wants more support from Dolores.

Dolores is getting questioned by Jackie now about her relationship with Jennifer. Jackie feels that Dolores does not have Jennifer’s back. She is still going on about that stupid video Jennifer made. Margaret smugly blurts out that Dolores is indeed more loyal to her. Dolores is not going to listen to “this” — meaning Jackie to hear her opinion. Dolores and Jackie get a little heated, and I would be afraid if I was Jackie. Dolores used to be a prison guard and she could break Jackie like a twig. She will clean her clock and not even break out into a sweat.

We then get a pushing match between these two strong-willed women, and then the dreaded to-be-continued…

Next week, we find out how ugly this conflict got between Dolores and Jackie. Will Tio Joe learn to keep his mouth shut about Joe Giudice around his nieces? My bet would be not. Happy Hump Day, Blurbers, and see you Friday morning for some fun in the sun in Miami.