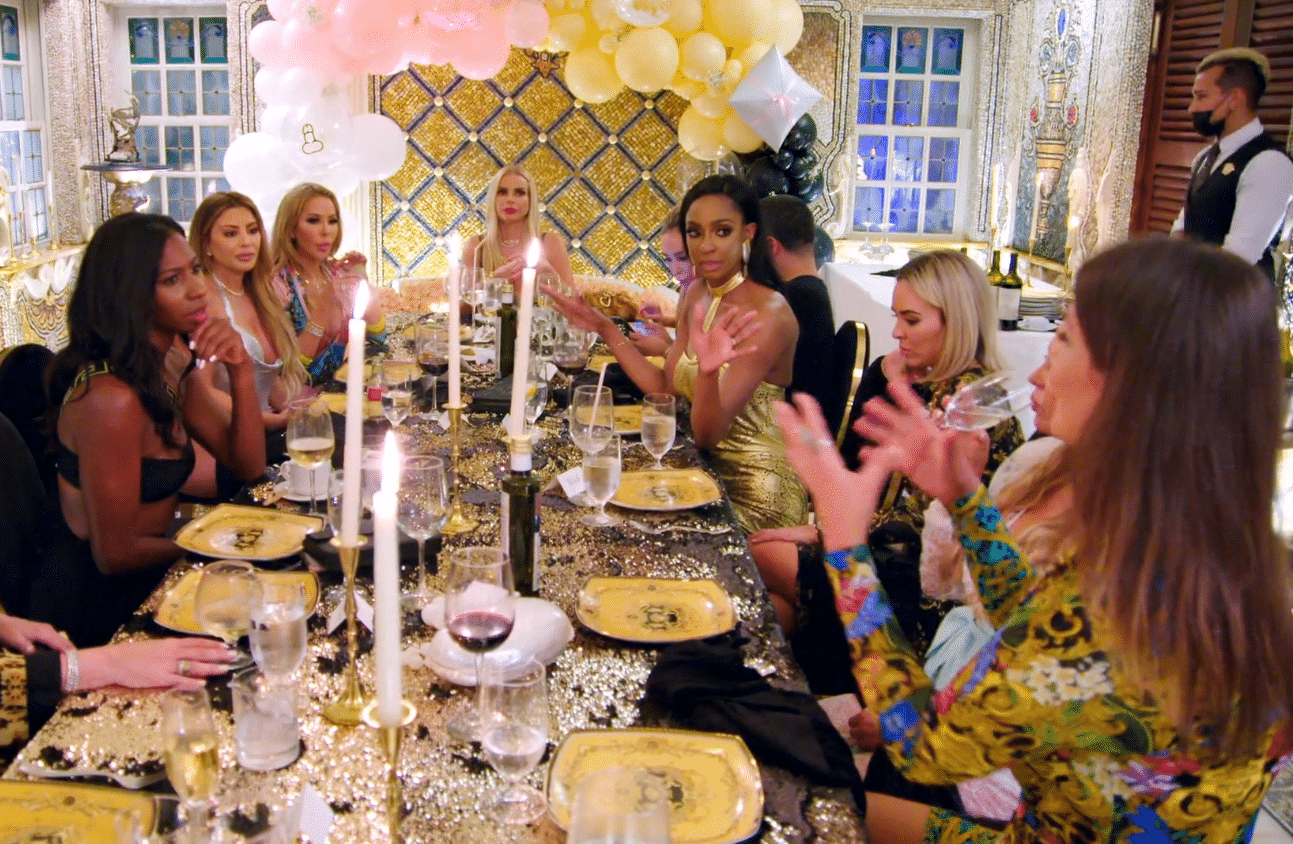 Pack your Versace gowns and some anti-venom for the episode aptly titled “Versace and Venom!” The Real Housewives of Miami are heading to the Versace mansion for Alexia’s bachelorette party, which is garnished with penis balloons and caviar! Let us overindulge on the opulence, shall we?

We are first shown a scene with Frankie and Alexia meeting up with his neurologists. They discuss how far he has come since the accident and how lucky he is to even be alive. Alexia then shares that she signed a contract for her wedding to be held on a boat. Todd does not know nor has he even seen the boat.

The two Fembots, Nicole and Lisa, are meeting up to snark since they obviously won’t touch their lunch. Nicole had FOMO after seeing Lisa’s Instagram documenting her European trip with Lenny. She shares that she extended an olive branch to her dad, and he came to the restaurant trashed. Lisa can commiserate with her since her dad has similar issues with drinking. She tries to get Nicole to reconsider giving Marysol another chance to have a productive conversation. Nicole has no interest in having a relationship with the “irrelevant” Marysol and declares her dead to her.

Alexia and Todd, with Guerdy already on board, are now checking out the Seafair boat for the wedding. They will be out to sea when they exchange their vows, and Alexia is ready to lock him down or throw him overboard marry Todd after five years of being together. The chef is now showing them their choices for their food tasting, and Alexia could not be any less interested. Alexia makes it a point to tell the boat chef that her friends are about eating less and partying more.  She could save a lot of money since this crew does not seem to eat.

Julia comes over to “Villa Adriana,” and Adriana is again wearing a head covering to cover up her greasy hair. Julia is sad her two kids are leaving home to spend time with their fathers. Adriana is used to people coming and going in her life. She cries in her ITM over being alone and lonely. Adriana laments, “You cannot depend on men because they leave for younger models, and you can only depend upon your friends.” While it starts pouring, Julia says love has no gender and she will be there for Adriana, and they find it reminiscent of the Notebook scene. Julia really needs to get her out of the rain, but she sees this as an excellent opportunity to allow rainwater to wash Adriana’s hair.

Larsa is looking at an 8.45-million dollar home in North Miami Beach. You can even drive a Ferrari into the house if you wanted to. Larsa needs to be reminded that she needs a garage to house five cars. The house has 103 feet of waterfront, and the view is insane. The realtor tells Larsa that Scottie finally signed the contract on the old house, but she has only 40 days to vacate. They sold their home for 10.7 million dollars, so Larsa will be homeless soon if she does not decide on a house. Side note: Do you all think she is dragging her feet to pick another home since she is planning to move back to LA? Larsa left this show years ago, and I am extremely suspicious that she is only here to film on RHOM.

Alexia, Frankie, and Peter — who looks like he just came home from an all-nighter — go and play basketball. She decides to sit down with Peter to discuss the situation with Todd. Alexia is willing to go to therapy, but Peter is not interested in going. Peter thinks that since he spoke to his grandma Nancy, who is a psychiatrist, he is simply fine and healed. Alexia is comforted that Peter went to her mom, but now she is bedridden and cannot help. She does not want to be a typical Cuban mom who coddles her son and thinks Peter is doing well. #chronicenabler

We have arrived at the Versace mansion for Alexia’s bachelorette party, which has “Same penis for life” balloons — nice touch, Lisa, very classy. Jonny brings a giant “pink cocky” that does not fit through the door. Marysol brags about hanging out here with Donnatella, Madonna, Cher, and JLo, and she learned a lot about entertaining from Donnatella. Marysol surmises that Lisa could not pull this off since she is just basically a plastic fun bubble that bounces around with no direction. She mentions she has not worked in six years. Did Mama Elsa leave her a huge inheritance?

Alexia is proud of the picture that was taken of her in a Versace dress. She got to be between President Obama and Herman. Alexia said the President thought she belonged in the center spot due to how fabulous she is. #obnoxious

Larsa, Lisa, Marysol, and Alexia are getting the huge room with a bed made for 10 at the Versace mansion. She thinks that Adriana is going to have a tantrum because she is getting special treatment. Nicole and Guerdy cannot stay overnight since they both must work the next day. The other ladies all get great rooms for themselves.

Alexia is all decked out in Versace for the dinner portion of the bachelorette party. Marysol asked everyone to wear Versace for the big night. Their outfits are on point — except for Larsa, who looks like she belongs at Space Nightclub in Miami. She has more than one body part ready to escape that slinky dress. The dining room is all decked out in black and gold in typical Versace fashion, and I have never seen napkins that stand up that high. Lisa then asks Alexia how many times she has sex with Todd a week. Alexia responds three to four times a week minimum because she is so horny all the time. Lisa looks forlorn in her ITM since Lenny is lacking testosterone since he is an old guy.

Alexia shares with the ladies that her mom was just hospitalized with COVID, and it is a week before the wedding. She is going to need a lot of help and a lot of drinks to be able to cope with this while trying to be excited about her wedding. Lisa makes a toast to Alexia. She tells her that she is an inspiration to her because she carries herself with such class despite all the things that she has had to deal with. She sees Alexia as her big Barbie sister and wants her to enjoy her special day.

Then, Lisa — with obvious producer influence — decides to ask everyone to put all their issues on the table. Horrible idea after Alexia just shared her mother is extremely ill. Marysol, of course, must direct the first comment to Nicole and ask why she is still talking about her. She thought they dealt with it in the Hamptons, but Nicole reminds her that she walked away and there was no resolution. Marysol wants to know why she is telling everyone that there still is an issue if she truly does not care about her. Nicole thinks that Marysol is delusional. Please just move on with this nonsensical drivel.

Julia decides to toast the future bride and then says there is someone with whom she cannot connect. Being Adriana’s BFF, we know who she is referring to. Larsa really rubbed her the wrong way over the whole out-of-wedlock comment. Julia laments that Larsa can be very condescending to her and took no time to get to know her. She thinks that she has been judgmental to her and views her as basically a peasant farmer. Larsa tells Julia she was taking care of her in Montauk and all Adriana did was give her a Xanax. Well, that pushed Adriana’s jealous buttons and she tells Larsa she is a Kim Kardashian minion. Then, we now have a to-be-continued.

Next week, the finale episode is sadly titled “No Wedding and a Funeral,” which is heartbreaking for Alexia. We will still get to see how Adriana’s comment will affect the calm, cool, and collected Larsa. Have a wonderful weekend, my fellow Blurbers, and see you in the Garden State on Tuesday for RHONJ!